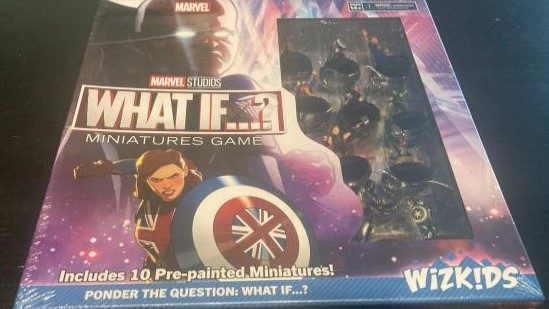 Around 2002-2005 my family started getting really into the Heroclix series. Not understanding a lot of specific details about the game, we understood the goal – defeat the opposing team on the battlefield. Heroclix had a unique stats system which was on the figure itself. The dial system made it easy to see how much damage a hero had taken, and easy for the opponent to see the stats on the table as well. I remember having The Flash, Wolverine, Aquaman, Eclipso, and Nightwing as my team (yes, I know they’re not all DC or Marvel, I was 10). It was a game that made sense then, but what about now? Here, about 20 years later, the Heroclix style game is back in my life with Marvel Studios: What If…? Miniatures Game. 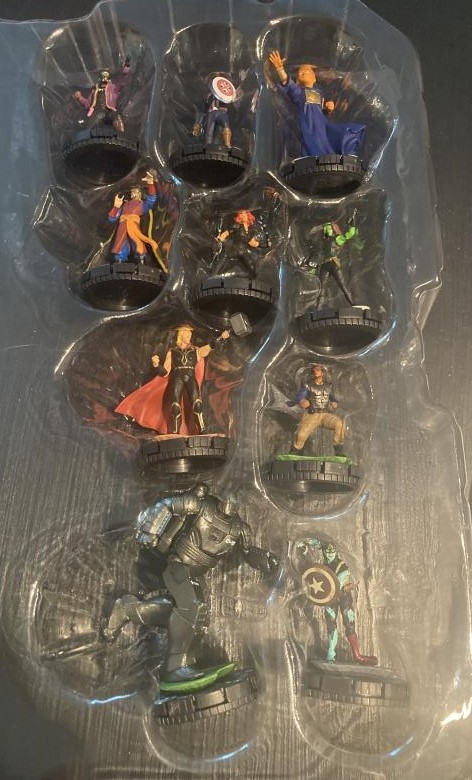 When you open the box you’re greeted with the instruction booklet and 10 pre-painted miniatures from the Disney+ series, What If…? These include iconic heroes/villains such as Captain Carter, T’Challa Star-Lord, Post-Apocalyptic Black Widow, Dr. Strange Supreme and more. While some miniatures like Hydra Stomper, Party Thor, and The Watcher look awesome, some such as Captain Carter, Black Widow and Dr. Strange Supreme have… interesting faces painted on. The level of detail just wasn’t there on some, while others looked glorious enough to have showcased on your shelf. Below the miniatures you have the buildable play area and all of the playtokens. All in all, the amount of space was precisely what you needed to keep the miniatures safe.

The instruction booklet was put together very well for first time players, or players who haven’t played since 2008. They give you two main sections: the “quick start rules” and the “advanced rules,” each giving in depth information on how to play the game with or without token and terrain being involved in the gameplay. The “quick start rules” provide everything you need to just play the game – movement, actions, FAQ’s, and pictures to help guide you throughout your first few matches. Meanwhile, for those who have played Heroclix and want a new challenge, the “advanced rules” offer information on objects, terrain, destroying areas on the map, and any miscellaneous information they deemed necessary. Alongside the rulebook you’re given cards that let you play through Scenarios. This is a great way to start playing the game without feeling overwhelmed by the amount of heroes on the board or amount of space on the table. Each one generally lets each player have 3-4 heroes on the table and fight for the goals listed on each scenario card.

Clicks are your health bar. Every time you take damage, you move down “X” amount of clicks. 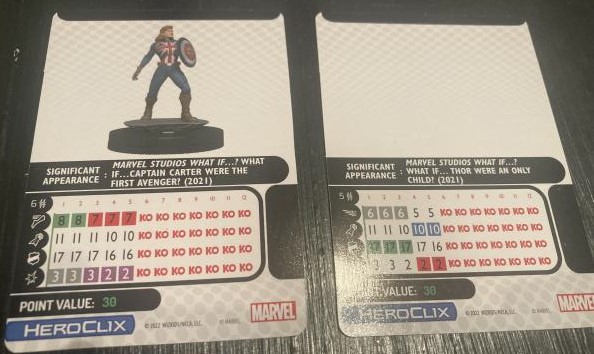 Oddly enough, there were issues with some of the details. To start, poor Party Thor didn’t get any art on his character’s card sheets. They’re just an empty area on the card while everyone else got both a full miniature picture on one side and an up close face shot of the miniature on the other. When it came to the booklet and scenario cards themselves, we found a few typos, which seemed odd given the normal attention to detail inside manuals such as these. While this didn’t affect gameplay, it did affect the overall experience and made the game feel somewhat unfinished. Along those lines, we had some issues during our time playing the scenarios where the scenario would call for us to do something such as “hide the Space Stone” and the “quick start rules” had nothing on how to “hide” an object, and while looking at the advanced rules, we found nothing on how to either. That being said, we simply just agreed on a hiding spot and moved forward. These might be a tad nitpicky, but with the level of detail in other aspects of this game, to have such a simple detail missed seemed odd. 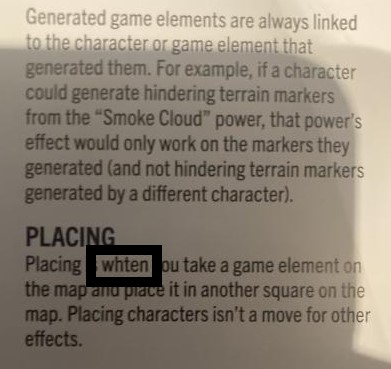 When it comes to the gameplay, you have three actions per phase, however, as you lose characters, you also lose actions. So when you go from three characters to two, you lose an ability to use an action token. This means that every turn matters and one wrong move can land you losing more health than you’d like. One thing we noticed while playing is that going first can matter quite a great deal, especially while playing the scenarios included with the game. Considering that a prize for winning a scenario is the ability to go first for quite a few of the scenarios, the ability to stack wins becomes easier and easier.

The main goal, or at least a consistent goal, is winning by KO’ing an opposing team. When attacking, you roll the die and add that to your character’s attack number. If that number is above your opponent’s defense, they take damage. This means moving the dial on the damaged character down by the amount of damage set on the attacking character’s dial. Usually this is between 1-3.

One small thing about the dials, they can be VERY hard to move. One wrong way of turning the dial might mean a character snapping off the base. I was the designated dial changer just because some of the dials can be extremely difficult to move when first playing. I know from experience that the more you play, the easier it becomes, but these were unusually difficult. Specifically, Zombie Captain America and Gamora, Daughter of Thanos, This is again, a nitpicky thing, but one that is important for most new players.

The thing that stood out to me the most about Marvel Studios: What If…? Miniatures Game was the storyline they told through the scenarios. As mentioned earlier, these are great for learning how the game works. However, more than that, they’re a great way to learn the characters, and by the end we had come to love our team and was disappointed if we didn’t get to use one of our favorites. The story is about The Watcher and Dr. Strange Supreme both hunting for the Infinity Stones. During this time they scour the multiverse to find them. Your teams are generally the following:

For the most part, these teams are very balanced and fit these scenarios quite well as the team makeups seemed out of place or unfair only a few times. This was quite a plus and something I wasn’t expecting when first pulling out Marvel Studios: What If…? Miniatures Game. 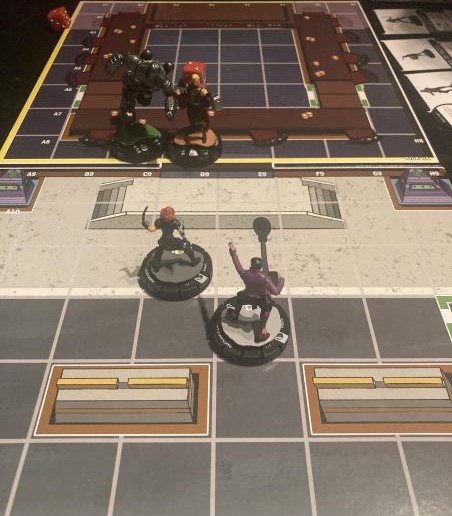 At the end of the day, if you’re picking up Marvel Studios: What If…? Miniatures Game, you should have at least a small idea of what you’re getting yourself into. It’s a teambuilding tabletop combat game. A cool thing is that all of these characters and maps are compatible with any other Heroclix you might already have in your collection. If you’re a fan of Heroclix’s Marvel line, or just a fan of the Disney+ show, I would suggest this game simply because of the fun scenarios. While I wish some of the small details had been cleaned up, the combat is straightforward and you have the ability to add rules as you and your friend learn the game more and more.

Marvel Studios: What If…? Miniatures Game

Marvel Studios: What If…? Miniatures Game takes the established Heroclix combat system, takes it to a 10 by adding new details, and then gives you a story line you can follow. With “quick start” and “advanced rules” in the rulebook, any Marvel fan can find a way to play the game with a friend. While some of the details can be easily missed or missing, the basis of the game is solid and able to be picked up by new players.

Adam is a musician and gamer who loves his partner in crime, Regan, and their two pets Rey and Finn. Adam is a fan of Star Wars, NFL Football, and gaming in general. Follow Adam on Twitter @TheRexTano.
Related Articles: Marvel Studios: What If…? Miniatures Game
Share
Tweet
Share
Submit