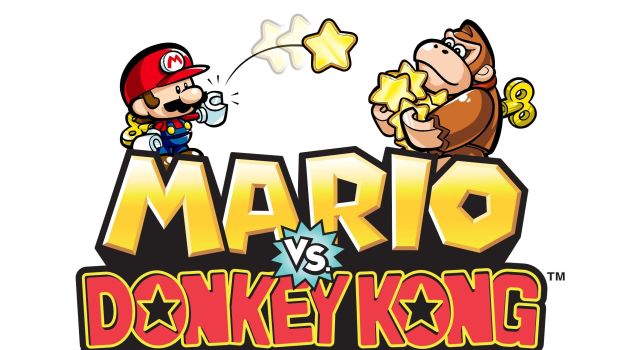 With a name like Mario Vs. Donkey Kong, this game might be mistakenly confused as a bout between the mustached plumber and his onetime nemesis, the barrel-hurling Gorilla. And while the game does pull aesthetics from classic Mario and Donkey Kong titles, there really isn’t a great deal about this simple puzzle platformer to justify the name or attention of the Nintendo audience.

The object of Mario Vs. Donkey Kong: Tipping Stars is to navigate a “mini” (basically a small windup toy) or a team of minis safely to their designated doorway. The gameplay is similar to Mario Vs. Donkey Kong 2 in that the player is unable to directly control the animatronic minis that, once started, will blindly march forward carelessly into danger. The only way to guide these windup toys to their doorway is by manipulating the stage around them as they move through it. In the introductory stages, guiding the minis to safety may require nothing more than connecting two points in order to create a bridge across a spike-filled chasm. As the levels progress, new and more technical tools will be utilized, such as springs, warp tubes and conveyer belts. The most difficult levels will test upon the player’s ability to organize teams, plan sequences and time approaches so that none of the minis are destroyed and all make it to the exit before the timer runs out.

The big addition that this sequel brings to the series is the Star Tipping system that is used in online play. Every time a level is successfully completed, the player is awarded with up to three stars, which are accumulated and saved into a wallet. These stars can then be used to either purchase new tools for personal use in the in-game level builder, or they can be awarded to other online players in the form of a tip to thank them for their enjoyable level designs. It’s an interesting concept and, given time, should encourage the best of the online level designers to rise to the top.

The bulk of the game is divided into eight different worlds, each containing eight levels ascending in difficulty. There are also 24 bonus levels that can be accessed from the main menu. To help keep things interesting, there are several variables introduced as the levels progress, such as doors that can only be opened with keys or special doors that can only be opened using specified characters. Other levels begin by presenting one of the minis with a mushroom that, once ingested, produces an evil-looking monkey hanging onto the mini’s back. These monkeys essentially turn any mini into an enemy, an ailment that can only be rectified by hitting it with a Donkey Kong mallet, the only form of attack. Why the evil monkeys on the back, why does the mallet stop it, and why is all this prompted by a mushroom? Who knows, but it does add an extra level of challenge by forcing the player to both avoid and rescue a specific piece before completing the level.

Overall, the best part in Tipping Stars is the aesthetic appeal. The music, sound and art design are all charmingly reminiscent of familiar and classic Nintendo titles from the past. Each of the worlds has its own recognizable rendition of various Mario and Donkey Kong theme songs, and players will encounter many of the same enemies and obstacles found in games stretching back to the first NES titles. And even though it can be entertaining to work through puzzles using the familiar characters from the past, it just isn’t enough to make up for some of the more tired and tedious mechanics of the gameplay.

In this review, I was tasked with specifically rating the 3DS version of the game (for Wii U please check out Matthew Welsh’s awesome coverage). Right off the bat, there were a few things that immediately bothered me about Mario Vs. Donkey Kong: Tipping Stars. Firstly, this is a brand new 3DS title and it is completely without any 3D options. Even though the game icon from the 3DS main menu screen and the banner on the Nintendo eShop is presented in 3D, there are no 3D effects inside the game itself. It’s arguable that 3D effects wouldn’t have added much to this 2D platformer, but I still would have appreciated the option.

I also personally didn’t enjoy being forced into playing the game using only a stylus. There really is no way around it. Trying to make the intricate and fast placements is virtually impossible on even the largest 3DS XL screen without using the little plastic pen. Using an index finger will block too much of the view and it’s nowhere near precise enough. To me, having to use the stylus limits the overall portability of the game. Since I do a lot of my own gaming on crowded subways and busses, I’m not always in a fair position for stylus play.

But the real problem I have with Mario Vs. Donkey Kong: Tipping Stars is that it doesn’t use the license in a new or inventive way. Most of the gameplay has been seen dozens of times before, and I couldn’t help but feel like I was playing a rehashed version of Lemmings with a Mario transplant. The characters and aesthetics are the best thing about it, but they aren’t used in any creative way that necessitates their inclusion. There’s not even a basic storyline premise to try and connect the characters to their actions.

It’s not the worst puzzle game out there; the 80+ levels are challenging enough to keep one occupied for a good 5-10 hours of pick-up style gameplay. It just isn’t anything we haven’t seen before. I did have some fun moments playing this Nintendo puzzle game, but at the end of the day, it’s really just old and familiar gameplay mechanics that are loosely propped up by the nostalgia of Nintendo.

Mario Vs. Donkey Kong: Tipping Stars is not a bad puzzle platformer, it just doesn't bring anything new to the table. The cross-buy between Wii U and 3DS is a welcome bonus, but perhaps this was done because the game feels very much like mini game for your phone and is not very well suited for either of the two systems.

Stefan started gaming the day his dad brought home a shiny, brand new commodore 64. He's been hooked ever since. Whether he's leveling up his ninja in Final Fantasy Tactics, cruising the streets of San Andreas or working on his Terran build order, videogames are never far from his mind. He is currently on the lookout for an appropriate 12 step program to address his electronic addiction.
Related Articles: Mario Vs. Donkey Kong: Tipping Stars (3DS)
Share
Tweet
Share
Submit