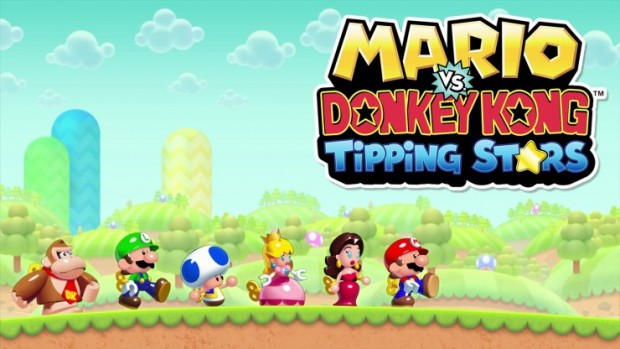 Mario vs. Donkey Kong has always been a series that requires careful planning just as much as it does quick reflexes.  The series has always tasked players with charting out their path and thinking several steps ahead before even starting each stage.  As clever as these games are, though, the formula has admittedly grown increasingly stale with each installment, as the number of releases has grown in frequency.  The series just feels exhausted.

Mario vs. Donkey Kong: Tipping Stars, the latest entry in the series, unfortunately does not provide the refresher that the formula needs.  The gameplay holds up just fine, but new puzzle elements are sparse and it is readily apparent that the series is light on innovation.

The same easy-to-learn, difficult-to-master puzzles are once again the centerpiece of the game.  Each stage features one or more wind-up toys resembling Mario, Toad, Peach and several other Mushroom Kingdom denizens, and it’s up to the player to safely get them to the goal in each stage.  This is done by using the limited number of tools, such as bridge pieces, springs, and warp pipes, to gather items and avoid obstacles.

Once each toy is activated, it is impossible to stop them, so a considerable amount of planning is required at the start of each stage.  It is not uncommon to plan out a toy’s entire path, plotting its course in your head before even getting them moving.  All of these puzzles hinge on some truly excellent stage design that will likely have players spending more time thinking than actually playing.  Nintendo has crafted some puzzles that seem simple at first, but turn out to be fiendishly difficult in practice.  As players progress through the more than 50 stages of the game, the difficulty intensifies significantly.  Maximizing the number of stars that are earned in each stage – awarded by collecting coins and finishing the level in a timely manner – becomes even more challenging when finishing a level is difficult to begin with.  Be prepared: some of these puzzles are hard.

The game is entirely controlled using the touch screen on the Wii U GamePad.  Players can pick up objects with a simple tap, and lay them back down by dragging the stylus on the desired area.  The fact that the game is so touchscreen-heavy makes it a natural fit, and it’s understandable why this installment is the first one available on a home console.  However, Wii U is a console that emphasizes the two-screen experience, and in a game like this, there is little purpose to viewing the television screen.  While playing Tipping Stars, the level map is displayed on both screens at once, making the visuals on the TV screen feel redundant, despite being able to see a larger view of the map.  The game works just fine entirely on the GamePad, but as the first non-handheld version of Mario vs. Donkey Kong, I wish Nintendo would have done a little more to make the game feel at home on console.

One area of the game that was particularly enjoyable was the game’s music.  Tipping Stars features some fun remixes of tunes from classic Nintendo games, such as Super Mario Bros. 2 and Donkey Kong Country.  The music is instantly recognizable to longtime Nintendo fans and the throwback is an entertaining surprise that had me anxious to get the minis to move, just so that I could get back to the upbeat soundtrack.

The ability to create and share levels is where the game really shines, though.  The game features an intuitive stage builder that allows players to create their own levels using either a template or entirely from scratch.  As far as I could tell, every tool and obstacle that could be found in the main game was also available in the level designer, and creating levels could not be easier.  I was able to use the simple drag-and-drop controls to create a relatively simple stage that featured multiple minis, coins, bridges and pipes, all within just a few minutes.  Sharing your completed level to Miiverse is just a tap away too.

Searching for custom levels is quite easy as well.  Players can sort levels based on creator, popularity and most recent.  I was able to try out a few of the custom levels that people had created, and while they may have been simple, the fact that they can be created and found so easily holds a lot of potential for the future of this series.  In the hands of the right player, some truly genius levels should soon be on the horizon and I’m sure that fans will keep coming back for some time.

The Tipping Stars name actually stems from the concept of tipping players with stars based on the stages that they create.  More than just a congratulatory high-five, tipping players provides them with more stars.  The more stars that a player earns, the more tools they have available to create custom levels with.  If you find a player who is able to create particularly enjoyable levels, tipping them is great encouragement to keep churning out more using a larger toolset than they had before.  It’s a simple concept, but will likely be a driving force towards getting some truly outstanding levels in the future.

In the end, Mario vs. Donkey Kong: Tipping Stars just feels like more of the same.  There’s nothing inherently bad about the game, but nothing really stands out as fresh either.  The one major redeeming factor is the simplicity of creating and sharing levels, and this game’s concept of tipping is a unique one that fosters praising imaginative players.  Once that excitement wears off, though, there’s unfortunately not much to hold your attention after the short main game is completed.

Mario vs. Donkey Kong: Tipping stars is fun, but ultimately feels like more of the same. The focus on community levels shows potential, and the concept of tipping is interesting, but the Mario vs. Donkey Kong formula feels tired. Tipping Stars is good, but it’s more apparent than ever this series is ready for a break.

Gaming Trend's resident amiibo collector, Matt's a lifelong gamer with a soft spot for Nintendo. As a new father, Matt often struggles to stay as involved as he has been in years past but can always be counted on to come back for some engaging geeky conversations. A resident of Philadelphia, he is currently working on building up his Man Cave with all things Marvel, Star Wars, and Video Games. As an old-school gamer, Matt firmly stands by his belief that gameplay will always be more appealing than story.
Related Articles: Mario vs. Donkey Kong: Tipping Stars (Wii U)
Share
Tweet
Share
Submit