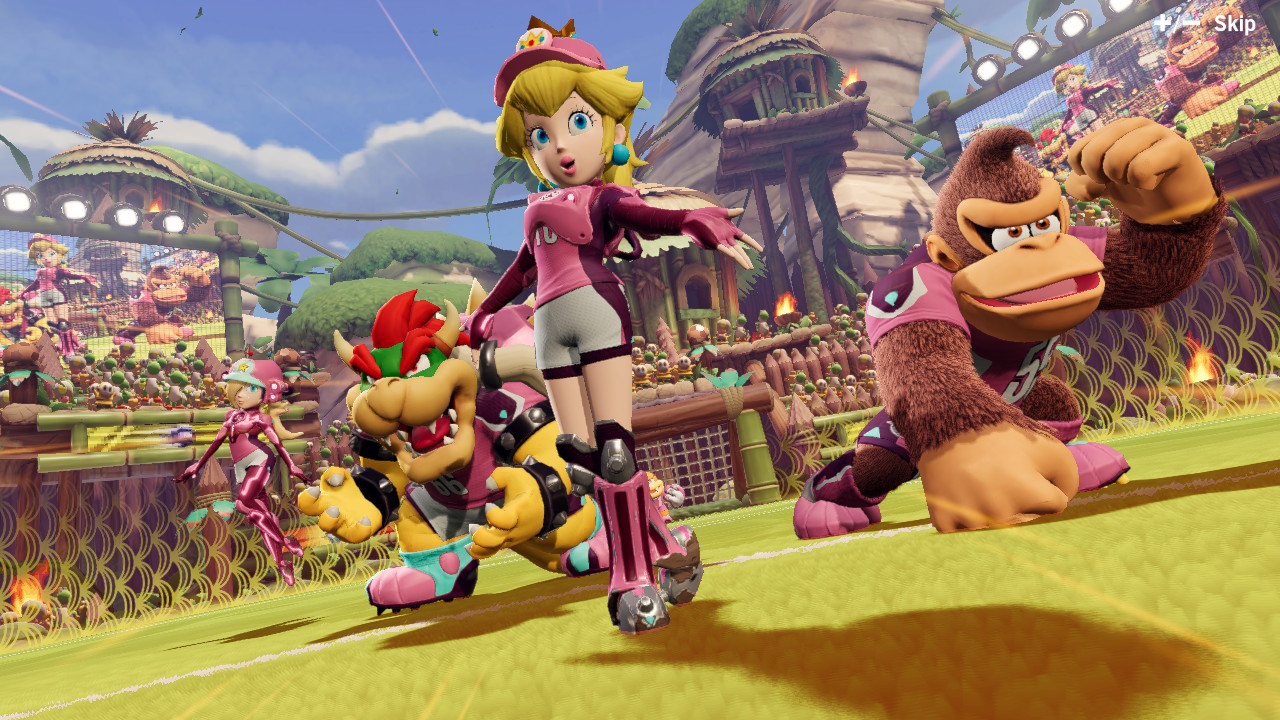 Mario and friends have played a lot of sports. The most prevalent of these are the racing, golf, and party games, but on the Gamecube and Wii there were a few titles that focused on soccer. Well, not exactly soccer – it’s far more brutal. Mario Strikers sees the Mushroom Kingdom’s best go head to head, sometimes literally, in a game with no fouls and almost no rules. You can full body tackle Bowser, kick Yoshi in the teeth, trip up DK with bananas, and use any means necessary to get the ball past the opposing team’s goalie. You can even score multiple points at once with Strikes – powerful special shots that take some time to charge. We may not have seen this sub-series since 2005, but it’s making a big comeback now on Switch with Mario Strikers: Battle League. Is it worth lacing your cleats back up? Or should this plumber have stayed in retirement?

Battle League is a simple game to pick up, but hard to master. You move your current character around the field using the left stick, with actions changing depending on if you have possession of the ball or not. In either case, you can swap characters with ZL, sprint and consume stamina with ZR, and dodge with R. Without the ball, you can press or hold Y to tackle. Depending on your character’s stats, a quick tackle will knock an opponent away from the ball or simply bounce off of them. The charge tackle is more reliable, and with perfect timing will end with you in possession of the ball. When you have the ball, you can press Y or B to pass (the former being a lob), and press or hold A to shoot. Once again, with perfect timing on a charged shot you’ll be more likely to score.

More advanced techniques include perfect passes, which successively increase your chance of a goal each time you pass immediately upon receiving the ball, and perfect shots, in which you shoot right when someone passes to you. All of these things are also affected by your characters’ stats and equipment, though not so much that you can’t pick your favorites. For example, I consistently used a team of Peach, Rosalina, DK, and Bowser, giving me a nice spread of stats. After winning a few cups and online matches, I spec’d Peach into speed, DK into shooting, Bowser into power, and Rosalina into an all-rounder.

In addition to stats, you’ll want to consider their strikes when picking a team. Every character has their own unique strike, such as Toad’s where he fires the ball into the dirt or Rosalina’s in which she kicks the ball around the moon to freeze it before shooting towards the goal. While these won’t make too much of a difference, considering you only get a short strike window upon picking up a randomly appearing orange orb, some can even affect players on the field by setting those in the ball’s path on fire or charming them. When setting up a strike, you need to fully charge a shot. Time slows down, and you need to correctly time two button presses landing arrows in colored parts of a meter. You want to hit the blue sections for a perfect, guaranteed goal but orange still gives you a decent chance. Despite its relative simplicity, these are actually pretty hard to pull off, especially against other players because you can still be tackled out of your shot before it’s set in stone. 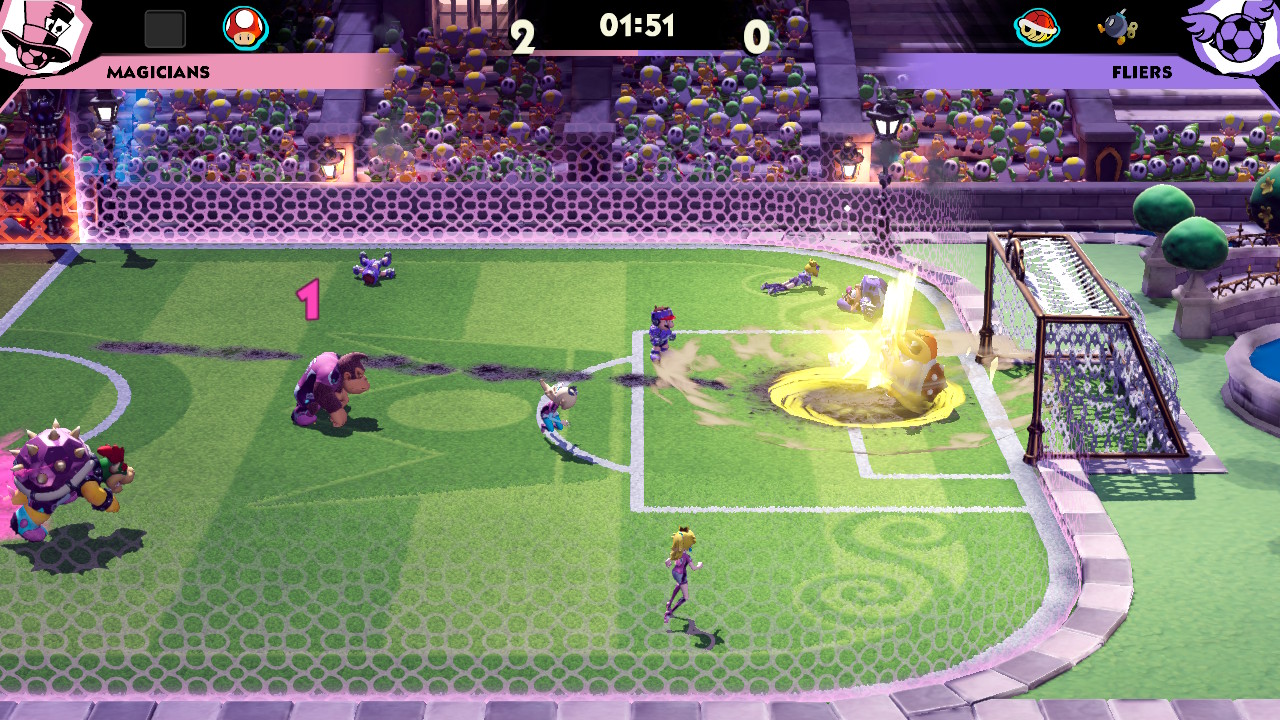 There is a lot to consider when playing a match, and I haven’t even mentioned items yet! If victory in Mario Party skewes more towards luck and Mario Tennis Aces entirely on skill, then Battle League is slightly more balanced though still heavily reliant on skill. It’s a lot of fun, but I can’t help but feel there’s just not much to the game outside the love of the sport. I adore how much personality the game gives to these beloved characters (see Peach going through the five stages of grief when the other team scores), but there’s basically only one mode to play. Sure, you can play online, against CPUs, and in tournaments both online and offline, but they all consist of the exact same type of gameplay with very little variation.

The game does try to spice things up by having each side select a stage before a match, with the two halves then forming the pitch. As far as I can tell though, this doesn’t actually do anything and is merely cosmetic. Both the roster and character selection feels pretty small too – sure it’s more than the original, but is lacking in variety and Daisy. I fear this is another case of Nintendo releasing a game with more to be added as free updates over the course of a year or so, just like Animal Crossing: New Horizons, Kirby Star Allies, Mario Tennis Aces, Mario Golf: Super Rush, Nintendo Switch Sports, ARMS, and Splatoon 2. If that list was any indication, I’m getting pretty sick of this trend. Sure some of those titles did feel fully featured at launch, but Strikers unfortunately falls into the light on content category. The core is polished to a dazzling shine, but there’s just not much to engage with here.

Mario Strikers: Battle League presents a shockingly deep take on Soccer held up by some incredibly charming and expressive character animations. Sadly there’s not much to see outside of the core loop, and can quickly wear out its welcome as things start to feel too repetitive.

David is the kind of person to wear his heart on his sleeve. He can find positives in anything, like this is a person who loved Star Fox Zero to death. You’ll see him playing all kinds of games: AAAs, Indies, game jam games, games of all genres, and writing about them! Here. On this website. When not writing or playing games, you can find David making music, games, or enjoying a good book. David’s favorite games include NieR: Automata, Mother 3, and Gravity Rush.
Related Articles: Mario Strikers: Battle League
Share
Tweet
Share
Submit