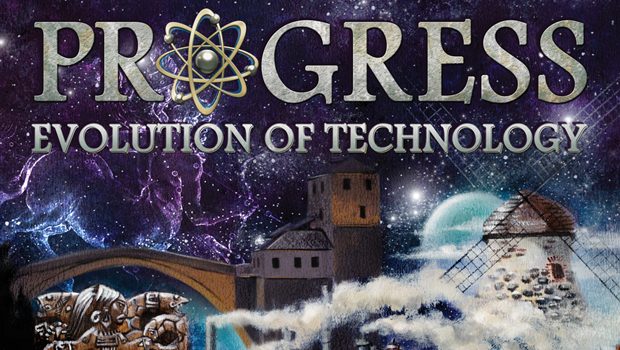 Every time I play big 4X games like Eclipse or Exodus: Proxima Centauri I find myself pulled to the technology tree, feeling that the rest of the game is simply a distraction for my civilization to gain more tech. The same is true whenever I play any of the Civilization computer games: all I want to do is play out the tech tree. Clearly, NSKN Games made a game just for people like me, Progress: The Evolution of Technology.

In Progress, players are racing against each other in pursuit of the latest and greatest technology. You start the game discovering simple things like writing and pottery, and by the end of the game your civilization knows all about evolution and refrigeration. What is unique to Progress is the lack of any other game elements. You are researching and discovering technologies in order to unlock more technologies. The game is found in how you go about climbing up the tree.

Each player’s board depicts their strength in different categories. These categories show how strong players are in various ways. For example, one category is simply how many cards the player can hold. Another is the number of actions the player may take on their turn. At the start of the game all players start with their tracks at the first position and as various technologies are researched, these tracks will increase.

On their turn players may perform two to five actions, depending on the turn count level reached on their board. These actions all revolve around drawing and playing technology cards. Every technology needs either a certain amount of knowledge or a prerequisite technology before it can be discovered. Knowledge comes in three different flavors: cultural, scientific and engineering. The main way a player gets knowledge is by discarding technology cards from their hand or from tokens representing their civilizations latent knowledge.

When a technology is discovered or researched, various awards and abilities might be given to a player. Some technologies will be worth endgame points, some will upgrade various tracks on a player’s board and some will give permanent knowledge tokens. There are three end game scoring tracks that keep track of player’s prestige, population and military strength. At the end of the game players are awarded points for their rank on these tracks. 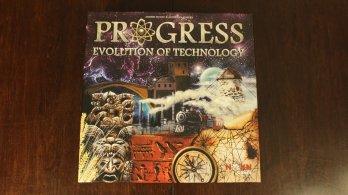 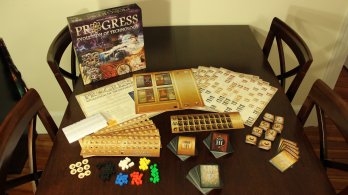 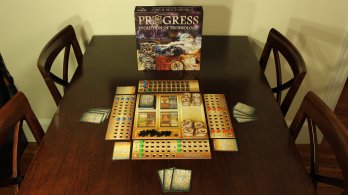 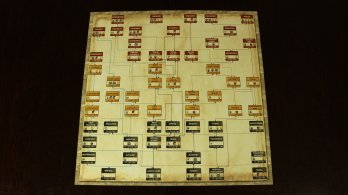 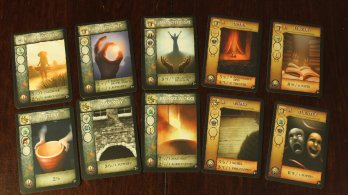 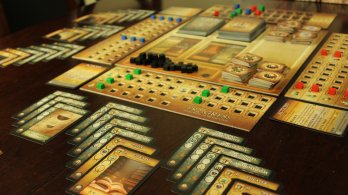 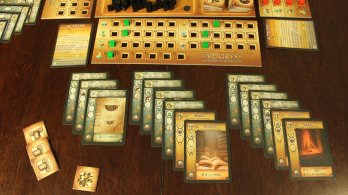 The technology cards are organized into different ages. When a certain number of advanced age one cards have been played, the age two deck is added to the game. From this point, when players draw cards they have a choice of two different decks to do so. The same thing happens with the transition from age two to age three. When enough advanced age three technologies have been played the game immediately ends, and end game points are calculated.

Progress’ key components are the cards, which are well laid out, and of solid construction. I am a particular fan of the consistent art style used to illustrate the cards. The rest of the components are fine. I do wish they would have been more imaginative with the permanent knowledge tokens. They are all homogeneous with slightly different icons. It would have been interesting to see different shapes, or a little different color to help differentiate.

The rules for the game are very simple. Progress gives of the vibe that it is a more involved game that it actually is. Once the rules are explained players catch on quickly. The rule book is well laid out with good examples for clarifications.

The game is played solitare up to five players. Before play with less than five players, various cards are removed to provide balance and tension. This modification is aided by markings on the cards. Play time falls right in the hour to 90 minute range, more players can extend the time significantly. Due to the solitary nature of the game, I would not suggest playing with a large group. The feeling of the game is similar with two and three players, but in much less time.

This solitaire aspect is a major detriment to Progress. There are two different ways players can indirectly interact. One is via the end game scoring tracks and the other is interactions with the discard piles. The way players interact with the end game scoring tends to be very close to random, so that interaction is not really apparent. When players draw cards, they may pick to draw from the available decks, or the discard piles. This means players must pay attention to what their opponents need and avoid discarding those cards. However this is exasperated by the limited card play, forcing the players to discard any cards they are not using. Thus, the discard interaction is also weak interaction.

One of the best moments in Progress is when you are able to spend all of your actions playing technologies without having to pay any knowledge for them. This happens when you have discovered all of the prerequisites for the new tech. This feeling is truly the core of what makes me love tech trees, when a long plan comes together. The tension arises from the limited nature of the technology cards. If you really need paper for your printing press, your opponents may have taken all of the paper technologies leaving you high and dry.

Progress’ limited interaction does lead to runaway leader problems. If one player starts to pick up steam, they simply start playing faster than any of the other players and quickly outpace them. This can cause major frustration when your opponent seems to be getting all the technologies they need, and you are coming up short every time. Because of the lack of feedback, it is generally easy to see who the winner will be around the time age three comes out.

The theme of Progress is contained entirely in the tech tree. That single aspect alone is thought provoking and interesting. However inspiring this is, the rest of the theme is lacking. Players have these boards that show the strength of their actions, but have no thematic link to the cards. The point values seem rather arbitrary, with some technologies scoring some, and others being worthless. It seems like a little more development could have lead to a more natural feeling game.

The upgrade track style used in Progress always touches something deep inside my gaming mind. Watching your civilization gain more and more capability as your actions are upgraded leads to a very rewarding and constructive experience. The way Progress has organized these upgrades is easy and intuitive, aiding new players learning the game.

The upgrade track fails though in conjunction with the randomness of the age decks. The simple randomness of the deck can cause havoc on some players and bless the civilizations of others. This randomness presents itself all the way from the upgrade tracks to the end game point tracks. Players generally only have a small set of cards to play, so the ‘best one’ is picked and played even if it has nothing to do with the strategy the player wanted to go with. This leads to a general averaging of strategy. If I set out to be the leader in military influence, I cannot do much with a hand containing a full progression of culture technologies. It almost feels like your strategy is just as random as the cards you get. There are ways to mitigate this issue, but not to any great effect.

In my experience, Progress' biggest hurdle is that players go into the game expecting something very different. The theme and the art suggest a deep and strategic civilization experience, but in actuality the game is much lighter. I happen to like its weight and I like the mechanics, but I can see why other gamers might be disappointed. If you are looking for a straightforward card game to play with a couple of friends, Progress is a good choice. If you are looking for a massive civ game that is going to take a whole day, move along. Either way, if you like technology trees Progress is worth giving a try.

From Trading in the Mediterranean to FPS, I love games. While I grew up in a house without consoles, PC gaming and board gaming were a large part of my formative years, and continue to influence my life. In this golden age of board gaming, I have jumped in headfirst in to anything table top. As a ludilogical student, I love thinking about how games work, their mechanics, their elegance and most importantly, enjoying how fun they are. Favorite Board Game (at the moment): Twilight Struggle Favorite PC Game (base solely on play time): Tie between WoW and DII Fell free to email me: comments, concerns, questions, feedback, rants, and/or suggestions.
Related Articles: Progress, Tabletop
Share
Tweet
Share
Submit