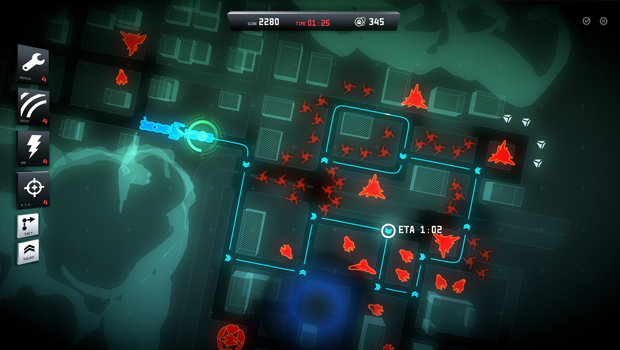 Many of us have wasted countless hours placing buildings and defeating endless waves of enemies in tower defense games, and 11 Bit studios tries to flip the familiar formula on its head with Anomaly 2 by putting players in the attacker’s seat. The gameplay is satisfying, but it may not be enough to make up for the game’s uncompelling story, dead-on-arrival online community, and grating voice acting.

Anomaly 2 has players taking the role of the commander, selecting units and setting them on paths along roads with stationary enemies flanking either side. Vehicles can be morphed back and forth between two modes mid combat. Depending on the vehicle, you can swap between short range or long range attacks, high defense or low defense, even the function of a vehicle can change when morphed. Commanders can also drop utilities that either enhance player units or hinder enemies.

The combination of morphing, disabling, and dropping powerups keeps the game frantic, but doesn’t do much to keep it from getting dull. Plopping area of effect abilities to lure fire from your vehicles is never satisfying in that clutch, “Will I or won’t I die” sort of way. If it looks like you’re going to die, then you definitely will. The only true satisfaction Anomaly 2 offers is after completing a particularly difficult mission. Players are given rankings based on swiftness, ruthlessness, and efficiency. Getting a gold on all three in one go is nearly impossible, so completionists will have plenty to do with Anomaly 2.

Usually I play games on whatever the second to hardest difficulty is. I’ve been playing video games for a long time, and I thought that Anomaly 2’s “Hardcore” mode was a pretty good description of the way I play games. Well, it turned out I was wrong. I could finish the first few levels on hardcore, but then I had to drop it down to normal at about level nine, and finally I admitted the ultimate defeat and lowered the game’s difficulty to easy, which still gave me a challenge, but I don’t recall ever losing a match after that.

I probably could have beaten the game on normal, but the game’s checkpoint system is, at times, extremely unforgiving. Checkpoints aren’t far between, but if you get to one having only a couple of units, or are low on utilities, then you’ll probably be stuck in a loop of hitting the checkpoint, dying in 30 seconds, restarting from the checkpoint, and dying. There is an option to restart the level, but it is just so discouraging to restart a level after you’ve trudged through to the last checkpoint only to realize you have too few units to see the end.

Even with the occasional soul-crushing defeat, I welcome the difficulty of Anomaly 2. Finding out which paths to take around a building to fit your squad’s lineup is fun, and the variety of enemy buildings on each path adds to the decision making as you direct your convoy.

You can purchase new units in the middle of a mission with Carusaurum, a mineral which is gained by pickups in specific spots on the map as well as by killing enemy towers. Upgrading units is also an option, but the difference was only noticeable with a few of them.

Anomaly 2’s narrative is one of its weakest points. The enemies, uninspiringly called “the machines,” are an alien force that swooped in and killed almost every human on Earth, and it’s your convoy’s job to find the weapon that will destroy them. It’s an extremely straightforward plot that makes no attempt to get you to care about a single character. The Earth is depicted as such a wasteland, and I couldn’t find much reason to save it from the characters or the story.

The game’s voice acting doesn’t help its narrative very much. The main voice acting cast does a tolerable job with their dialogue, but outside of that the voices of the vehicle’s drivers get annoying quickly. There’s only so many times you can hear a unit say, “I’ll shove a rocket up your tin-can ass” before going insane.

The graphics are impressive and do a great job of showing off the scale of buildings and the mechanical creatures, but the environments are just so drab. More than half the game is spent in the snowiest cities in the world where grey vehicles, grey machines, and grey buildings get a heavy dusting of white snow. And while the visuals are impressive, when particles fly from large explosions, the frame rate drops become very noticeable.

The core difference between Anomaly 2 and its predecessor is that the latest installment has a multiplayer mode. While the game’s multiplayer has been getting a lot of praise from reviewers on the PC, on PS4 I was only able to find an opponent after an hour of trying. After finding them, another timer came up that just said, “Please wait.” After over an hour of waiting, I gave up. I tried a few more times later and still couldn’t find anyone to play with. The lack of an active community is hardly 11 Bit’s fault, but with the online multiplayer experience basically missing, the PS4 version of the game suffers.

A tough-as-nails tactical challenge is hard to find in today’s console market, and Anomaly 2 will probably be enough to scratch your strategical itch. Without a strong multiplayer community behind it though, I would say skip the PS4 release and head straight for PC if you have the means.