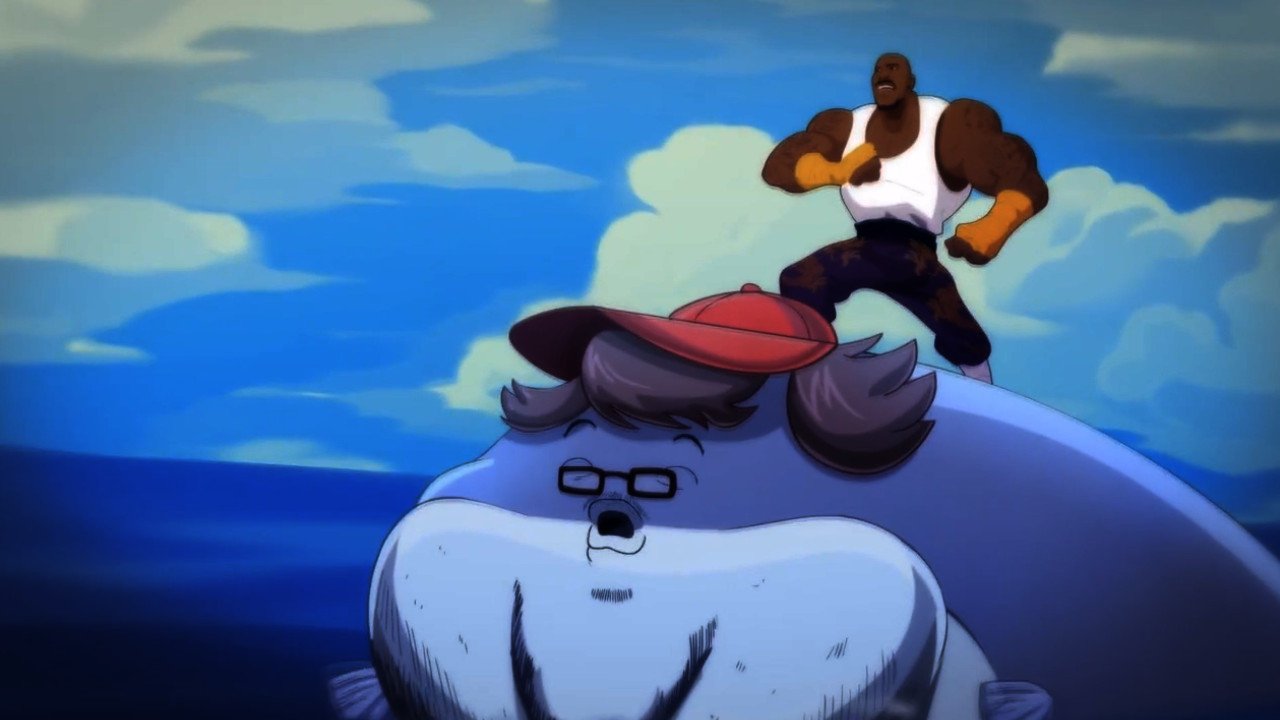 Look, if you told me that I had to write, “Shaquille O’Neal donned a cactus suit in order to defeat heavy metal rockers so he could destroy a Paris Hilton-esque demon” in a review last year, I probably would have laughed it off. Yet, here we are, and Shaq Fu: A Legend Reborn is now available, which is more of a reboot than a sequel to the infamous 90s video game. The premier crowdfunded Shaq experience has changed the 2D fighter into a beat-em-up, and the results are… surprisingly decent. While it has its fair share of problems, Shaq Fu: A Legend Reborn is an unexpected treat to play.

Right as you boot up the game, you get an oddly hilarious rap number from Shaq himself, boasting about how cool he is. Immediately, you know you’re going to get an over-the-top action game with an emphasis on comedy. (Also, Siivagunner? We need high quality video game rips of this, stat!) In the game proper, an alternate universe Shaq mysteriously appears in the Chinese village of Hunglow (also indicative of the type of humor you’ll see). While teased for his size, his master Ye-Ye sees the potential in him as he trains to become the hulking athlete you see today (minus him actually being a basketball star). His village is soon attacked, and his master tells him of the Chinese god of death, Yen-Lo Wang, who wants to destroy the world. After his master’s death, he’s sent on a global mission to kill the demons that have disguised themselves as celebrities in order to dumb down the general public. It’s a plot that never takes itself seriously, and the game exudes that cheesy charm.

As for the gameplay itself, Shaq Fu: A Legend Reborn is pretty fun. It’s a standard beat-em-up in the realm of Final Fight, where you can control Shaq as he beats up a variety of enemies, from fanboys to fascists. You have a slew of moves, from basic and strong attacks, to smash and dash attacks that need to be charged. In addition to this, you also get super suit power-ups in some levels, transforming you into Big Diesel (a reference to the platinum-selling Shaq rap album) or a cactus (which shoots more needles than a sewing club).

Enemies come relentlessly in waves, and while they’re relatively easy to dispatch, they do provide a challenge in later levels, especially when some are impervious to certain attacks. One example early on was a big bouncer type enemy that would counter my Size 22 strong attacks, so I needed to use basic attacks in order to hurt them. However, other waves of enemies were also ganging up on me, so I needed to switch to my dash attack in order to evade them. It’s a frantically paced flow of enemies that forces you to keep changing tactics. In this respect, it nails the beat-em-up formula exceptionally well. The transitions between attacks are seamless, and it feels satisfying to nail a combo, even if the layout is a little simplistic. This is key in a beat-em-up, as clunky controls will make or break a game. Compare it with something recent like Squareboy Vs. Bullies: Arena Edition, where the attacks don’t connect into each other well, and you can get mobbed by enemies pretty easily. That isn’t fun, and Shaq Fu: A Legend Reborn knows that.

Boss battles are where the Shaq Fu: A Legend Reborn shines. They’re rather silly lookalikes of real life people, from Justin Bieber to Kim Kardashian, and they spice up the mechanics just enough to keep you on your toes. Props to the Baby Face boss stage, where I had to do an unexpected dance minigame to beat him (probably a nod to the infamous show Shaq Vs., perhaps?)

Shaq totally won that episode of Shaq Vs., by the way.

On a technical aspect, Shaq Fu: A Legend Reborn feels like a game that was crowdfunded with less than half a million dollars. It actually runs pretty perfectly, with minimal slowdown even on handheld mode and a stable framerate. However, at the time, it was supposed to be released on last gen consoles like the PlayStation 3 and Xbox 360, looking like a mid to late-life cycle title from those consoles. This isn’t Odyssey or even Hyrule Warriors, but it does have its charm. The cutscenes (which will be mentioned later) are fluid, even if they have a “stylistic suck” feel to them, and I experienced no crashing or hard reboots while playing.

He goes on to namedrop Flappy-Shaq.

While the genre is usually known for repetitive gameplay loops, Shaq Fu: A Legend Reborn suffers from its short length; with six levels, it’s over in less than three hours, and considering the $20 price tag (or $40 if you got it physically), it might not be too great of a value. It’s only single-player, and while it has some hilarious moments, it does suffer from limited replay value. That being said, the end of the game hints at one last boss battle, and there is DLC in the works that confirms, yes, you’ll get to fight Kanye West as Barack Obama. (What a weird day for odd sentences!) Plus, if you ended up getting Saber Interactive’s NBA Playgrounds before its major update, then you would get this game for free on the Switch, so that might mitigate the risk a tad.

Speaking of humor, this is the game’s most notable aspect, though it’s hit-or-miss at times. The cutscenes look like they could be ripped from an Adult Swim show (or, in a memetic comparison, The Nutshack), but they’re performed with so much ham that it becomes The Room or Sharknado levels of “So bad, it’s good.” It helps that THE Shaquille O’Neal voices the titular character, and you can feel his passion for the project. Additionally, there are tons of fourth wall breaks that give even Deadpool a run for his money. Everything from the Indiegogo campaign not funding Ye-Ye’s animations to the infamous Steel movie to the importance of Gold Bond and Icy Hot are here, and those invested in Shaq’s career (or fame as a meme) will find it endearing, if not a little bit odd.

Just imagine this in Shaq’s voice. Because this is a real thing.

On the other hand, the original humor can be a bit jarring. I’m surprised what the developer could do with the T rating, and the answer is a lot. If it weren’t for bloodless combat and the fact that this is not a serious title, it could have been an M-rated game for sure. The jokes concerning potty humor are pretty uninspired though, most notably with the boss fight concerning the Kim Kardashian clone: She turns into a butt, attacks with poison farts, and a song that sounds suspiciously like Jason DeRulo’s “Wiggle” plays in the background. (It’s called “Jiggle”, get it?) You also have enemies saying things like, “YOLO” and “Cash me outside, how bout that?” which will make the game feel dated in about a week (though perhaps this was intentional?) A few of the jokes fall flat and won’t mesh with everyone, but it’s mostly a fun time. You’ll need to check your expectations at the door and not take the subject matter too seriously.

By all accounts, Shaq Fu: A Legend Reborn should have been a disastrous failure. However, it ended up as a surprisingly competent beat-em-up, and its passionate charm and fun gameplay make up for its uneven humor and short replay value. Put on some Gold Bond and head to the court, because it’s time for a Shaq Attack!

Elisha Deogracias is an aspiring accountant by day, freelance writer by night. Before writing for Gaming Trend, he had a small gig on the now defunct Examiner. When not being a third wheel with his best friends on dates or yearning for some closure on Pushing Daisies, he's busy catching up on shonen manga and wacky rhythm games. Mains R.O.B. in Smash. Still doesn't know if he's a kid or a squid.
Related Articles: Indies, Shaq Fu: A Legend Reborn
Share
Tweet
Share
Submit