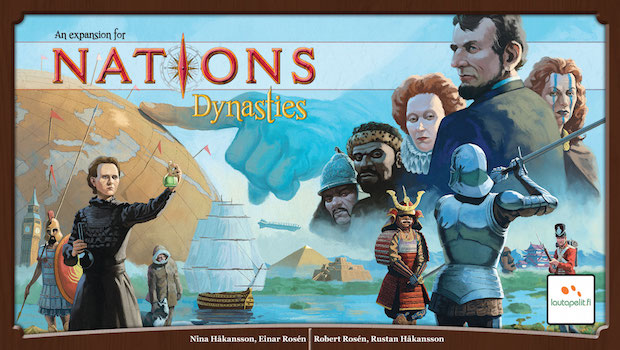 Civilization building games have always held a certain fascination with gamers. The ability to play an immortal leader, bringing a fledgling empire to ultimate glory, has long been a staple of both computer and board gaming with great titles like Sid Meier’s Civilization or Through the Ages. Lautapelit’s Nations certainly ranks among the best board game offerings. With its engaging card drafting and resource management elements, it’s little wonder Nations was one of 2013’s best new games. Now, Lautapelit has released Nations’ first big expansion, Dynasties, to build on the success of the base game.

The enticement for purchasing Dynasties is the boost in the number of available nations to play. While Nations only came with five, Dynasties adds a dozen more to choose from. Sure, this appears to be a continuation of the trend in gaming of offering loaded expansions to boost the limited options in the base game. Nations is hardly alone in this regard. Still, the nations included add a considerable amount to the game. Each is distinct with starting abilities that reflect that nation historically. Japan and America start with rice fields and buffalo horde, respectively, giving you a huge early food bonus, while the Mongolians begin with powerful horse archers that will make short work of those early raids and wars. Many of the new powers also have a special ability. Poland, for example, allows you to collect bonus books when you aren’t defeated in war. These special abilities come in lieu of a fourth building slot, but they are quite useful in their own right.

The new nations do have an annoyance. Nations are printed on both sides, so the Arabs and Americans can never be in the same game unless you have multiple copies of the expansion. Some may question the inclusion of some of the nations. Poland over Russia? Portugal over Spain or England? Don’t think for a minute, though, that the powers included are slouches. I’ve already mentioned Poland’s great book bonus from wars. Vikings can force other nations to lose resources. The Koreans gain free architects with each Golden Age. There’s not a dull power included.

Many new powers have special bonuses that help give each nation its own identity.

The expansion also includes more progress cards to add to the core decks. There are some really intriguing new ones, such as the Wardenclyffe Tower wonder which lets the builder take three actions when ready, or the Pocahontas leader which adds four food to your empire but makes conquering colonies more difficult. The cards add some nice variance, but the addition of the new natural wonder is a bit of a mixed bag. Some, such as Siwa Oasis, which gives a three book bonus to each colony bought, have obvious positive effects. Meanwhile, the Northwest Passage forces you to choose between a hefty four victory points versus removing two population from your workforce. The give and take of many of the natural wonders adds some depth to the decision making rather than just a grab for the best available wonder.

Some natural wonders can be a double-edged sword, while others, like the Great Plains, are great additions to your empire.

Everything included thus far is a boon to enhancing the game, but the addition of turmoil and dynasty cards don’t always result in a better gaming experience. Dynasty cards work as national epoch cards, mirroring the philosophy or situation of a nation during a particular period of time. Even the original base nations have dynasty cards included. This adds some more individualisation to the game. Now the Mongols can become the Golden Horde or the Romans can move from a Republic to an Empire. The focus of these dynasties is certainly to enhance group play as solo players will find many of the new cards useless to them. Turmoil cards work similar to the way a revolution worked in Sid Meier’s Civilization. As your power switches to a new dynasty, it undergoes a period of turmoil which results in a temporary loss of two stability. However, players can opt to simply gain two gold instead of switching dynasties. Since stability is rarely a factor unless exceptionally low, this could cause people to throw themselves in turmoil for some gold. In terms of gameplay, or running an empire for that matter, that makes little sense.

The expansion may have some minor quibbles, but there’s no doubt that this is a must purchase for those that own and enjoy Nations. The added powers add immense replayability. The new progress cards and wonders add enough variety that you can now give your empires a personality. In my preview games, I focused on colonies and wonders that produced military for Poland, freeing up valuable workers to keep my growing empire stocked with resources. The depth of this expansion is sure to breathe new life into Nations.

Nations Dynasties expansion adds considerable replay value to the base game. Each added nation has its own characteristics while natural wonders and dynasty cards add deeper strategic elements. Tripling the nations available for less than half the price of the original game make this a must have purchase for fans of Nations.