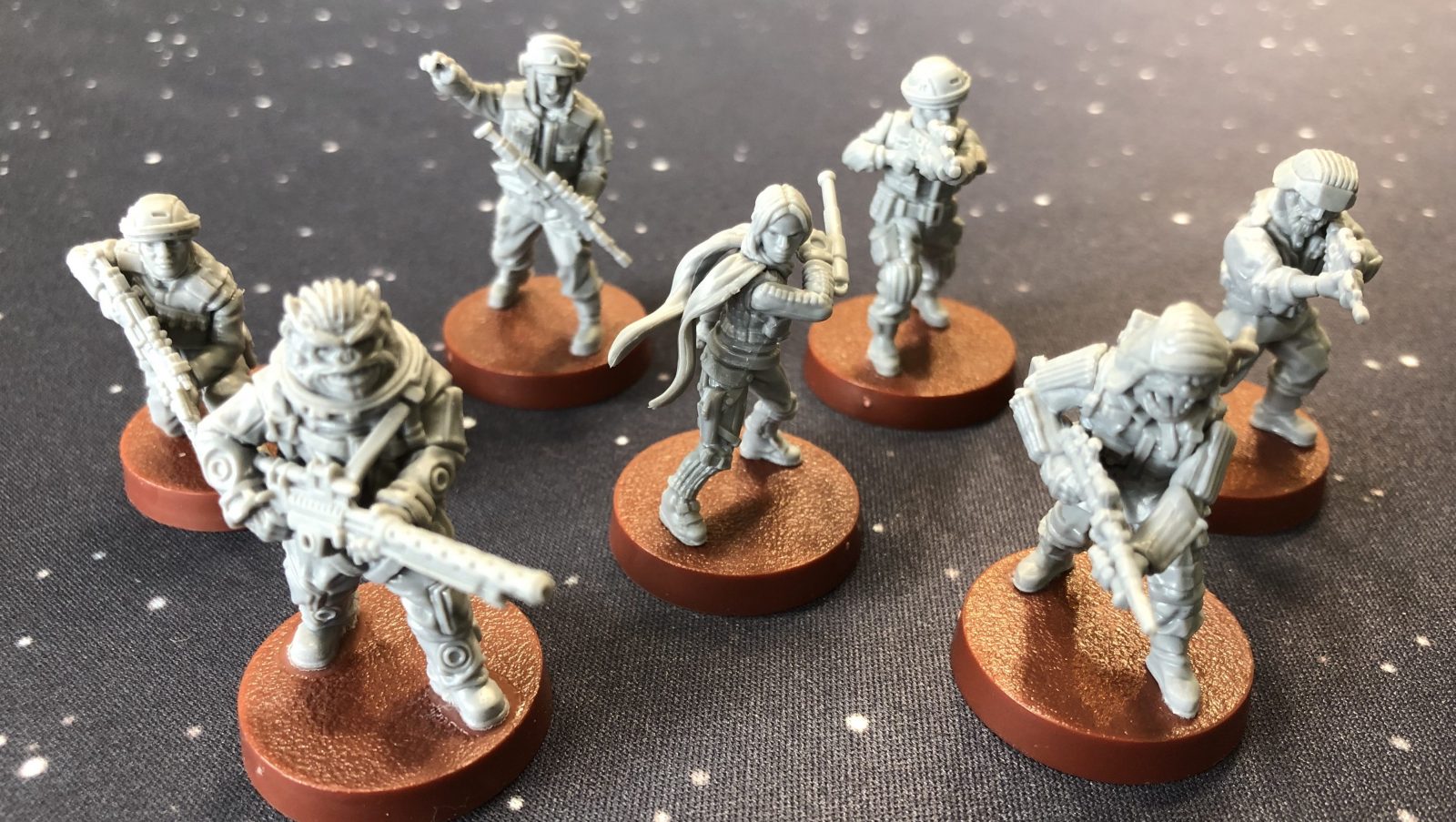 Crouching in the bushes on an isolated part of the battlefield, Rebel Pathfinders monitor Imperial troops moving towards a critical communications relay. These Rebels are all alone and not equipped for a stand-up fight, but they do have some tricks up their sleeves which will disrupt the Imperial commander’s plans. Crouching nearby, the Rebel’s inspirational and crafty leader, Jyn Erso, signals the attack. With coordination and skillful application of abilities, the Imperial Troopers find themselves suppressed then routed as Jyn follows up a barrage of fire with a tonfa-swinging charge. That’s right, Jyn Erso and the Rebel Pathfinders have made their way from the screen to the Star Wars: Legion tabletop and they are here to help you control the battlefield and manipulate your enemy.

Both expansions come with Fantasy Flight’s excellently produced minis. The four basic Pathfinders look good, with dynamic poses and uniforms that are similar to the core set Rebels in appearance (read our review here). The Pathfinders also come with two optional heavy weapons minis, both aliens that you will recognize from the movie and who, it turns out, are named Pao and Bistan. Bistan’s alien features are a nice plus, but the mini’s pose feels a little static. Pao’s mini is the highlight; he looks menacing with his mouth agape showing rows of pointy, alien teeth and an aggressive firing stance. Jyn Erso’s mini is outstanding, but is also one of the more challenging Legion models to put together. Her scarf and the tonfa make her instantly recognizable across a crowded battlefield, but I found the scarf parts did not really set well against the mini and have some weird gaps that took green stuff to clean up. Overall, the minis are great with little work to assemble and drop into the battlefield, and a pile of cards come with them to give you all the options you need to augment your army. 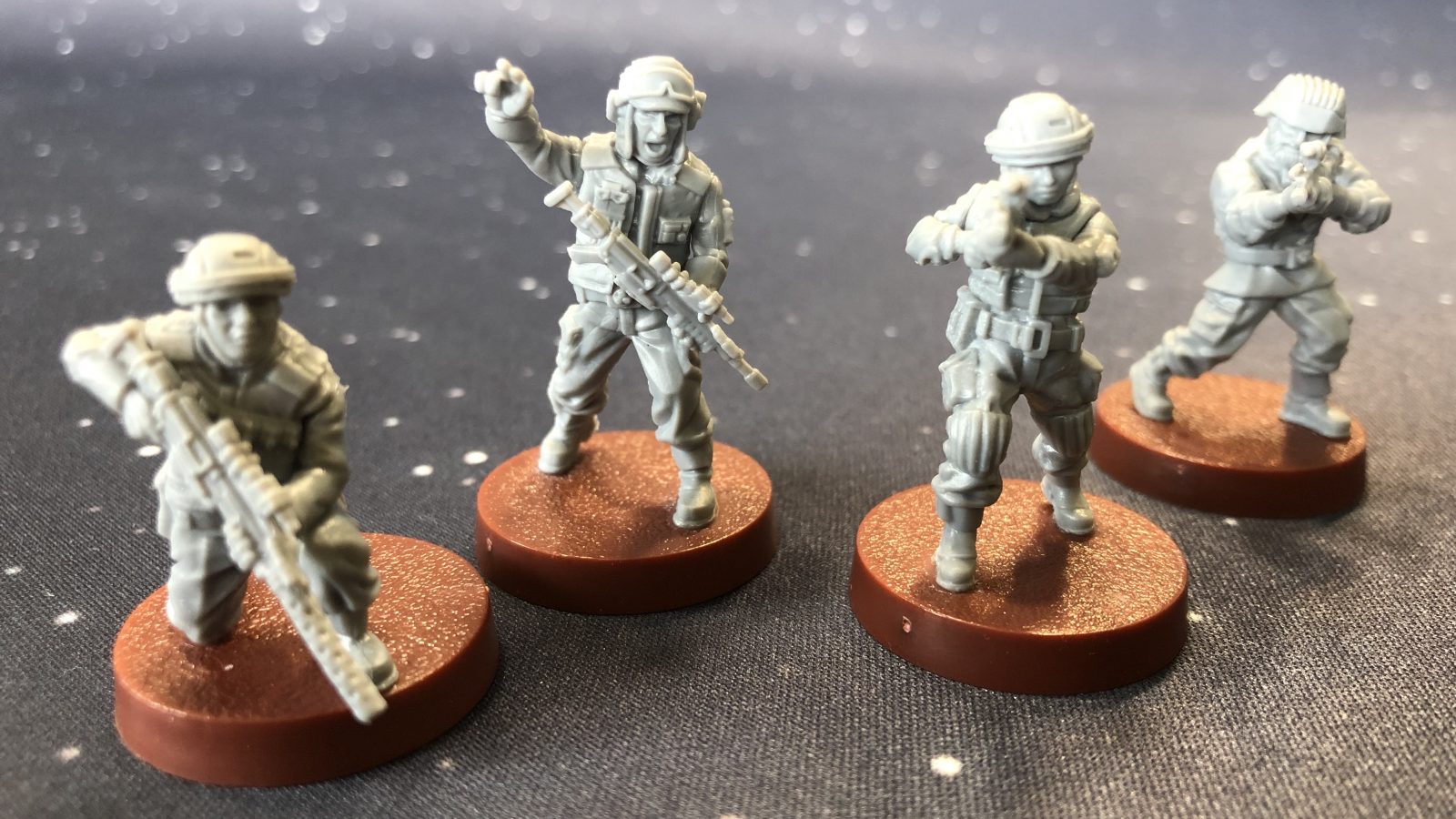 The expansions come with a nice variety of upgrade cards, almost exclusively built around manipulation of suppression tokens or reducing the penalties associated with suppression. The Pathfinders upgrade cards include their two named heavy weapons team members, Pao and Bistan. Pao’s card makes him interesting among the heavy weapon choices because adding him to the team makes him the unit leader, unlike Bistan’s card, which keeps him squarely in the traditional heavy weapon category. Making Pao the leader means that he is wounded last and will be the final mini removed from the unit, which is a bit unusual. It’s nice to have your heavy weapon stick around a bit longer, instead of being stuck with the pistol carrying leader last. Bistan’s card on the other hand, does not make him the leader, but it does give him both Impact and Ion damage so he’ll definitely put some pressure on any opposing vehicles that get within range. The Pathfinders unit card comes with a medium-range A-300 blaster rifle, which is reconfigurable with double-sided upgrade cards into both short and long range options. While her unit card does not have a ranged weapon option, Jyn also comes with a double-sided upgrade card that gives her an A-180 blaster that is reconfigurable as either a short-range pistol or a long-range rifle. The unit and upgrade cards that lean into suppression management are complimented by Jyn’s three command cards, which are strongly attuned to the Pathfinders and help capitalize on the Pathfinders’ abilities.

Both expansions have the Infiltrate and Danger Sense keywords on their unit cards, making them ideal to deploy together to a remote part of the battlefield. Infiltrate lets you deploy the unit anywhere on the battlefield except within range three of an opponent’s unit. This is great for getting into an advantageous position outside of the proscribed starting zones, and you’ll want to have some stand off from the enemy anyhow. Using Infiltrate to start with two units outside of the starting zones changes the way both you and your opponent have to view the battlefield. Nicely complimenting Infiltrate is the Danger Sense keyword which gives the minis bonuses when they accumulate suppression tokens. Add in Dauntless from the Pathfinders Unit Cards and other suppression related abilities gained through upgrades and you end up with a team that thrives on manipulation of suppression tokens. The reconfigurable weapons that everyone is packing give the units the ability to adjust on the fly to changing situations on the battlefield, and make them ideal to sit and wait for the enemy to approach, hitting them at long, medium and short range for higher chances to damage with each progression. Because they are operating out alone, they are likely to come under fire, so suppression is going to be a factor for them anyway, finding a way to manage then take advantage of it is what the Pathfinders and Jyn are all about. 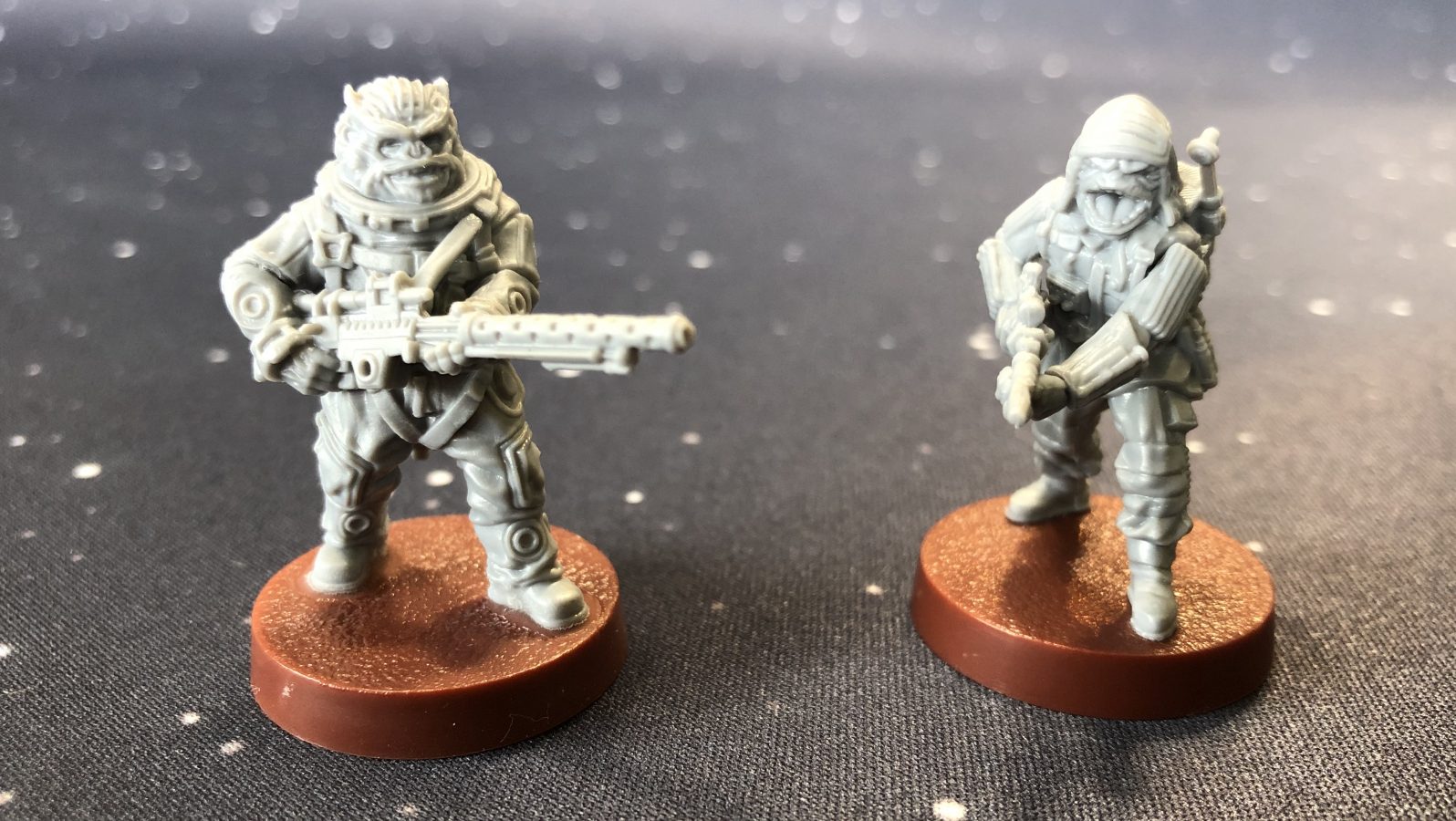 With all of the suppression juggling that you have to do, these expansions require finesse and practice to deploy in your army. They seem true to form to the movie: they look like the Rebels in Rogue One that went to Scarif and they fight like them too. They are not designed for an open, troop-on-troop fight and won’t work well if used like a Corps unit. The Pathfinders live up to their Special Forces role and Jyn compliments them very well. Rather than giving you the long-range firepower of a sniper, or sneaky Scout move of a commando, Jyn and the Pathfinders reach deep into enemy territory and mess with their plans. Because of this, Jyn and the Pathfinders can be a struggle to learn to play. With the ability to deploy them almost anywhere you want, the temptation is to put them on a key objective and then get Jyn nearby to try to suppress incoming enemies. In my experience, that strategy will quickly get them hammered by too much incoming fire, and playing around with suppression tokens won’t matter if there are only two minis left on your turn. I’ve found that a better way to use them is by disrupting your opponent on the periphery and trying to bleed off firepower from their main effort. Similar to a fast moving vehicle, deploying the Pathfinders deep can give you the ability to flank enemy units and put pressure on a part of the battlefield that your opponent would rather ignore. Jyn, if she is close to the Pathfinders or another friendly unit, can capitalize on any suppression they have dealt to an enemy with a unit-breaking charge swinging her suppressive collapsible tonfa, but only if all the coordination works out. Unfortunately, Jyn isn’t good in a toe-to-toe fight, so charging into melee is a bit of an all or nothing situation with her, so it makes sense that her one-pip Command Card gives her Charge and sets up exactly that situation – it’s a good way to have her go out fighting. 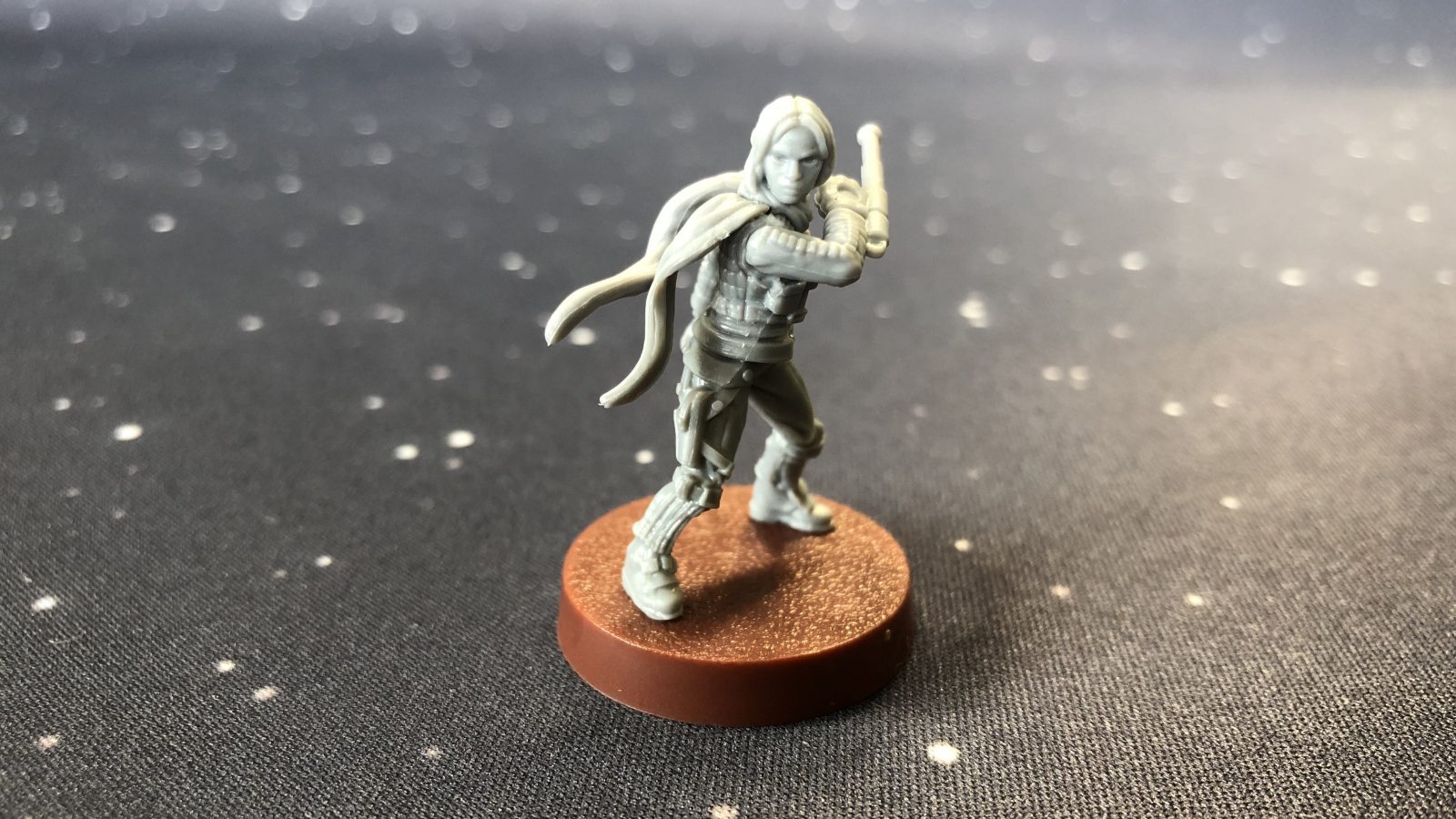 Clearly, these expansions are meant to go together. They came from the same movie and they have synergistic abilities and keywords. While either expansion could be added to your army by itself, there are probably better options that can take their place if you aren’t going to field them together. Combining them is costly from a points perspective, but, if you have room in your army for Jyn and the Pathfinders together, they can make a competent team to disrupt the backfield of your enemy and keep them distracted from their objective. Unless you are a pretty experienced Legion player, be prepared for a fairly steep learning curve. My experience with them on the tabletop was less than stellar, I felt like I was juggling suppression tokens like crazy and had a hard time getting much out of them. While you don’t have to come under fire to get suppression tokens, that was basically how I did it, and just as they seemed to be doing what I wanted, all my minis died under withering fire from multiple enemy units. Despite that, I want to get them back on the table to figure out how to make them work well.

Comprised of excellent models, these units look great and fit in perfectly with the Rebel forces. They are great for augmenting what the rest of your army is doing, but they are challenging expansions that take your army in a new direction. Jyn and the Pathfinders work very well together, but if you do choose to add them to your army, you may need to practice with them more than usual to nail down your strategy.

Steven spends his days working deep in the bowels of a government building and evenings with his wife and daughter. He spent the last quarter century working in and around the US military. His passion is tabletop games. You can catch him playing, talking, reading and writing about RPGs, wargames, board games, party games and card games. Steven is from Texas, but currently lives in Virginia.
Related Articles: Star Wars: Legion Pathfinders, Tabletop
Share
Tweet
Share
Submit