It’s no secret that making video games is a long, arduous process. There’s a lot to consider: the core concept, game mechanics, progression, visuals, sound design, budget restraints, and much more. Whether it’s a big studio or an indie developer, these aspects will come into play. Indiecalypse aims to show the struggles that indie developers face when trying to make their own game. The idea is neat, but it was clear that depending on the execution, it could go either way, so why not take a look for ourselves?

Indiecalypse mainly plays as a modern 2D exploration game, but has 24 minigames mixed into it (more on those later). The basic gameplay consists of you walking through levels, talking to various characters, and completing different objectives. You may need to collect a few items to make something, you may need to talk to certain NPCs, etc. It’s very simple, but that’s not really a problem. You’ll play as Jack, Ethan, or Violet as they follow their respective paths in the hopes of creating an indie game. Jack considers himself a genius programmer and dreams of being the greatest video game developer of all time, Ethan loves music and wants to make plenty of money while also showing off his musical talents, and Violet is a gifted artist who wants to share her creations with the world and make it big. These bits of backstory make them a bit more endearing, but unfortunately doesn’t make me root for them as much as I’d have hoped. I don’t want them to fail, but I was indifferent on if they succeeded or not. 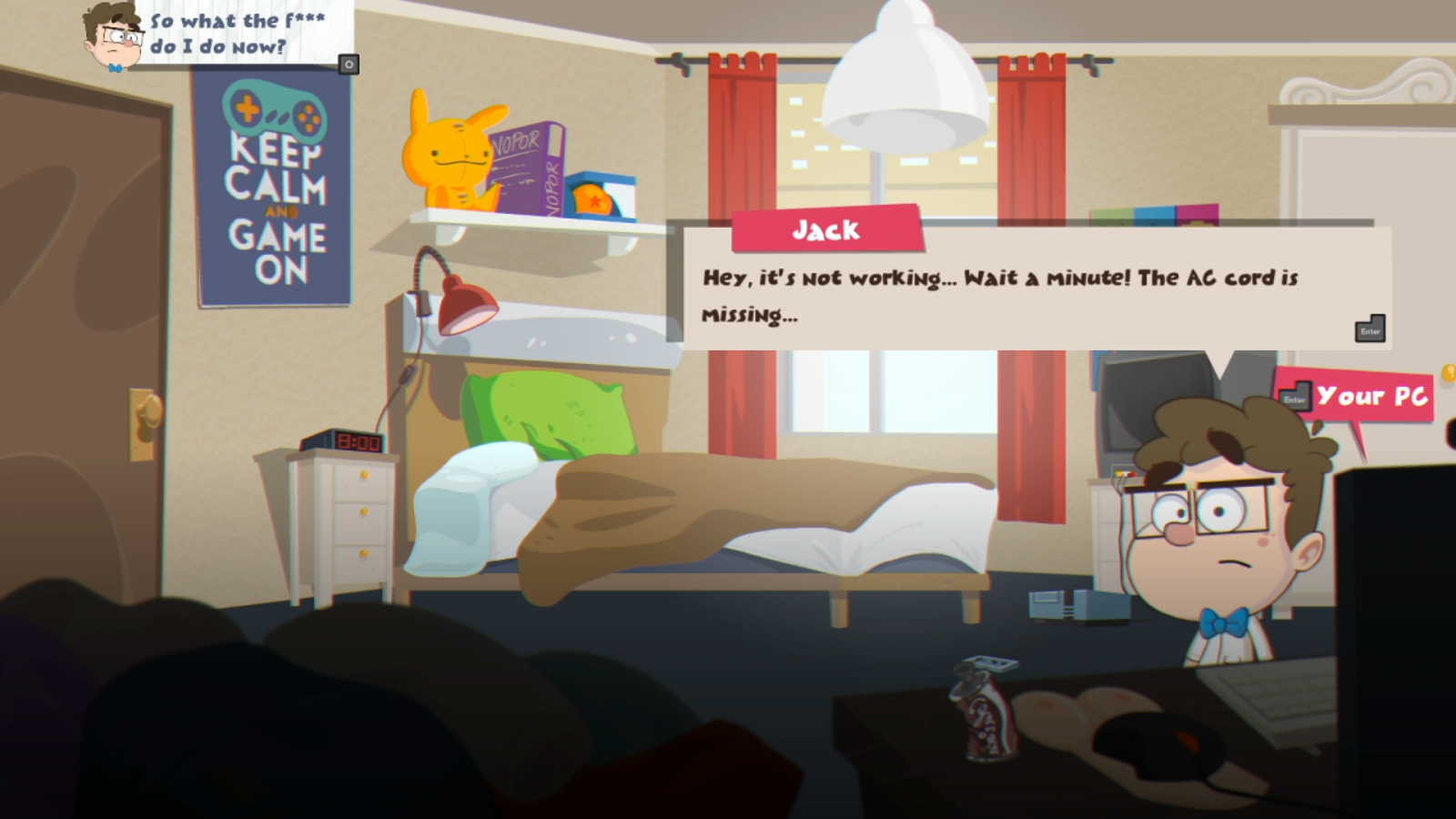 The beginning section of the game is told in real-time, but then the story becomes told through flashbacks at a certain point. The characters do point out how much this gets used and criticize it, which I found funny. They had no problem breaking the fourth wall multiple times, especially with how meta the game’s premise is. For people who like the crude and dark humor that shows like South Park delve into, you’ll get some chuckles out of this game. Nothing made me crack up, but you can tell what they were going for. For example, South Park had a teacher character named Ms. Choksondik, and I feel like Indiecalypse created the teacher character named Mr. Fuckeye as a nod to her. It could totally be a coincidence, but then again, large portions of this game are based on other existing shows and games. That being said, this game isn’t for kids and you should be prepared for potentially offensive content if you plan on picking this up. That’s not a critique, but I believe that it needs to be said.

Now, following the order of the story, let’s talk about Jack’s expertise: gameplay, but more specifically, the minigames. The minigames are a mixed bag for me; on one hand, I like the variety of games that they paid homage to, but on the other, the execution had some issues. Throughout Indiecalypse, you’ll encounter situations that must be completed in the form of other video games. To name a few examples, you escape some bullies in an Enter the Gungeon style level, you can kill flies in a Duck Hunt style section, and you even program some code via Guitar Hero gameplay. There are 21 other minigames, all with their charms and issues. The charm essentially boils down to how neat it is to get little snippets of other games within this one game. The issues are a different story. 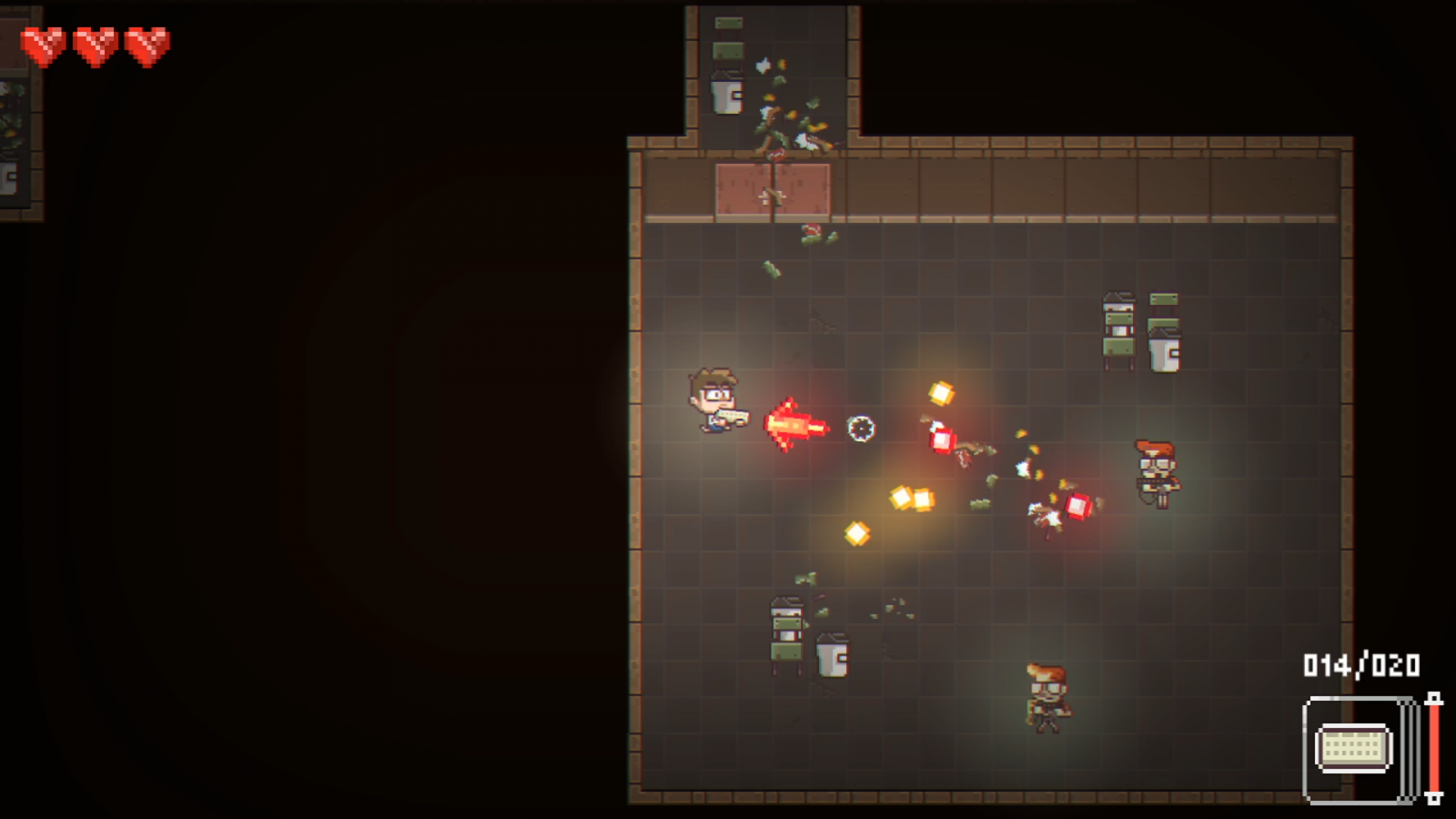 My two biggest complaints are the controls for the various minigames, and the instructions given before playing them. You can tell that the developers attempted to recreate the gameplay and controls of each game that they paid homage to, but that doesn’t stop some of them from being a bit clunky. Some games were a bit finicky with registering button presses and aiming, but it was never enough to ruin any of the games. What did ruin the minigames was the instructions, as odd as that sounds. Before starting a minigame, you’re given a few slides to look over that show you how to play said minigame. And by show, I mean you’re given pictures of the gameplay with arrows; no words to explain exactly what your goal is, no control scheme, nothing. Now, if there was an overarching control scheme, that’d be forgivable, but that’s not the case here. This means that you’re left scrambling to figure out the controls as soon as a minigame starts, and that may end up costing you your first attempt. If you know that the arrow keys or WASD are standard methods of movement, then you’re at least safe there. Although, some minigames only let you use the arrow keys, while others only let you use WASD. It’s odd that you wouldn’t be able to use either one you chose, but whatever. I’ll save you a little time here by saying that WASD, Q, and Enter are going to be what you’ll mostly be using.

Finally, I need to point out the most frustrating minigame to me: Cooking Bad. It’s very clearly a play on Breaking Bad, which is a show and not a game, but that doesn’t matter. The point is that the instructions have the most missing details out of what I experienced. Pay VERY close attention to the colors in the Smurf picture, and keep an eye on the bottom of the pot. The game doesn’t tell you that you should try to keep the mixture a blueish color and that leaving the pot at the temperature stated on the instructions will cause it to explode if you don’t reduce it while cooking periodically. That would’ve been nice to know and saved me plenty of time and attempts. If the developers could add clearer instructions with words and a clear goal, then that’d help a lot. Oh, and speaking of the minigames, if you exit out of any of them, you lose progress for the entire chapter. There should be an autosave or something right before them, especially with how annoying some of them can be. 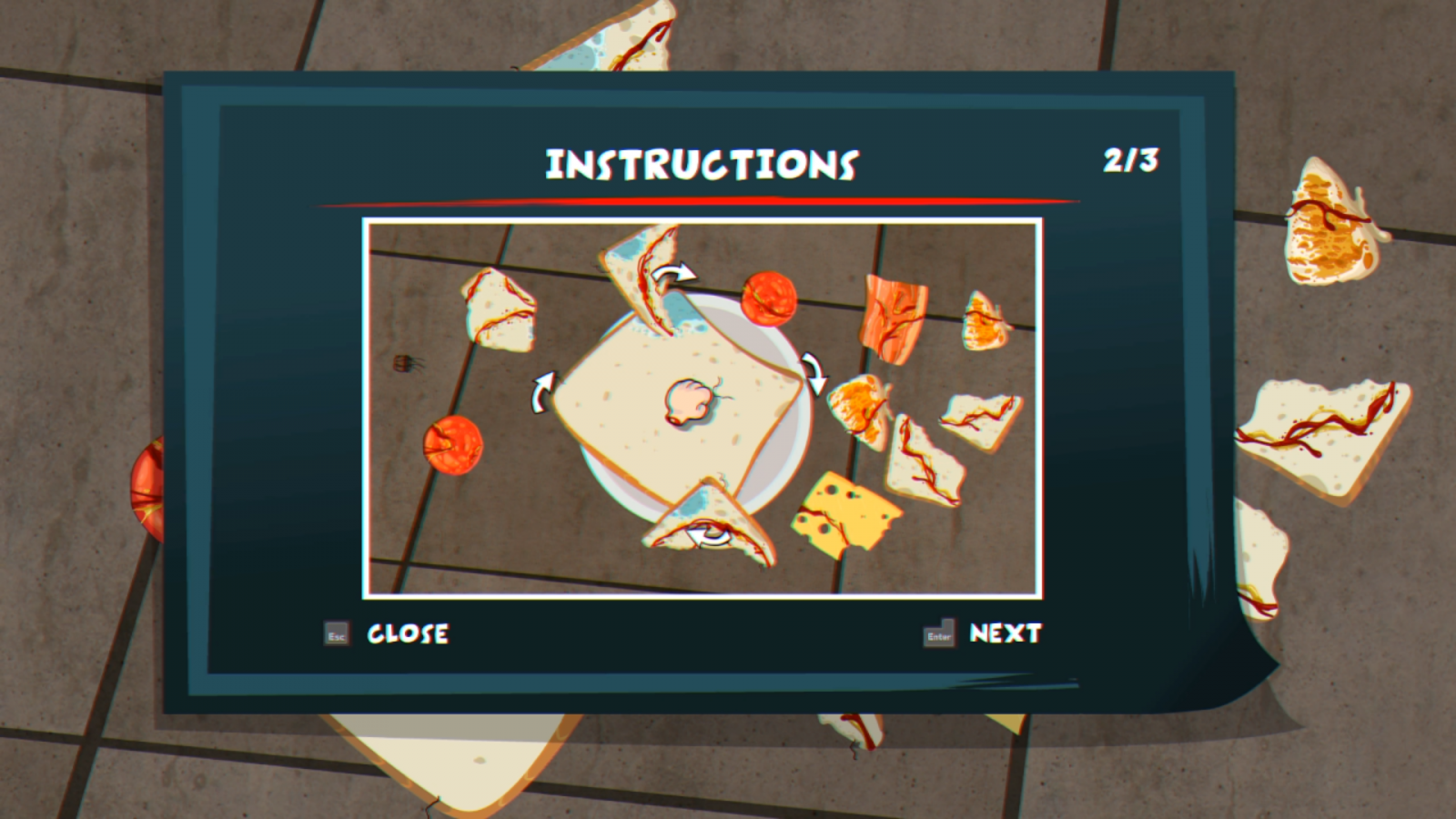 In honor of Ethan, let’s talk about sound design. The game doesn’t feature voice acting, but instead has gibberish, almost like Animal Crossing voices. I would’ve liked some voices for the characters, but the gibberish noises aren’t bad either. Reading the subtitles gives you what you need, so there’s nothing lost in terms of dialogue. The background music is relaxing and captures the everyday life tone of the game. The minigame music even attempts to recreate the soundtracks from the games they are imitating, even to the point of closely matching up with the original games’ sound effects.

For dear Violet, we’ve got our art style up next. I love the look of the game, no question. It’s simple, looks smooth, and makes me smile. For anyone who’s watched Gravity Falls, you may feel right at home with some of these characters. Right off the bat, I couldn’t help but think of Dipper every time I looked at Jack. There’s even a character in the cafeteria near the beginning of the game who resembles Wendy. Not everyone looks like they came from Gravity Falls, but the ones who do were more appealing to me. That being said, the character designs are all great and have their own uniqueness that they give off. The settings around these characters are colorful and feel like just small parts of a bigger world. I wish I could’ve seen a bit more of the town they live in, but I understand why that wasn’t done. 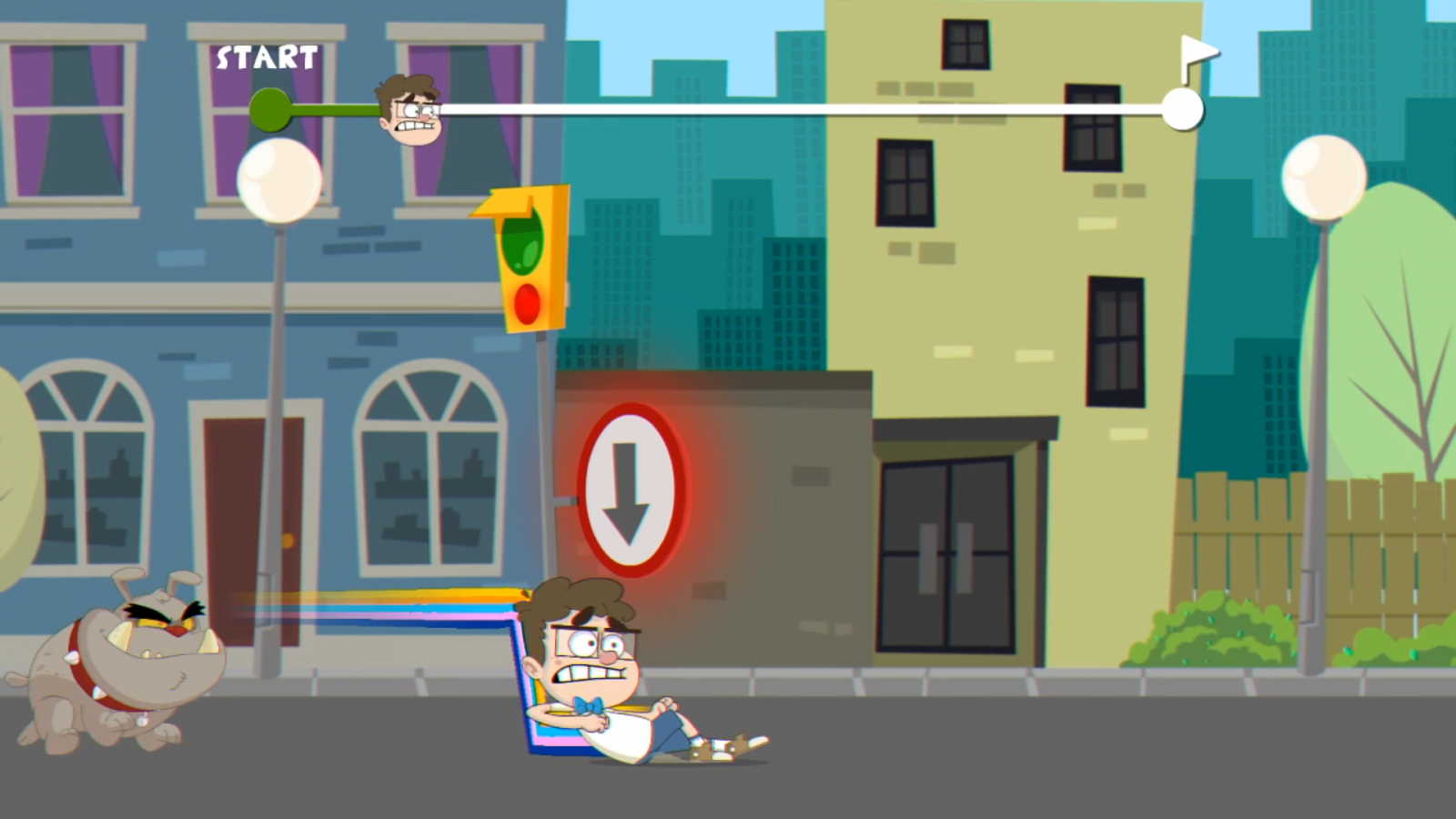 Since we have our three characters who essentially represent the main three aspects of the game, I’d like to do something different and assign evaluations to them. For starters, Jack, you had some neat ideas and ambition, but you didn’t execute them that well. The game runs fine and I enjoyed playing it for the most part, but the minigames are where my frustrations set in. Add in some clearer instructions and control schemes next time and you’ll be way better off. Ethan, the music and sound design was fine, especially when trying to imitate other games. Some voice acting could be good, but I won’t knock you for it. Violet, you are the clear star here to me. The entire art style of the game is a wonderful walk into a deceivingly cute yet truthfully crude world that I loved partaking in. It was easily my favorite aspect of the game. Adding onto that, Indiecalypse takes around three hours to beat if you can get past some of the frustrating minigames. If you want to give it a go, be my guest, but I’d probably wait until either the price goes down or some clearer instructions get added into the game.

Indiecalypse is a look into the struggles of developing indie games, but in gaming form. The gameplay is simple for the most part, but the lack of clear instructions for minigames gets frustrating. The homage to various other games is neat, but that's about it gameplaywise. The art style is great and I'd love to see more games with characters and worlds like this.

Codi loves to play video games and watch movies. He will watch almost any kind of movie just to experience them. His ideas take inspiration from the shows and movies he watches, and games he plays. He also loves a good pun.
Related Articles: Indiecalypse
Share
Tweet
Share
Submit