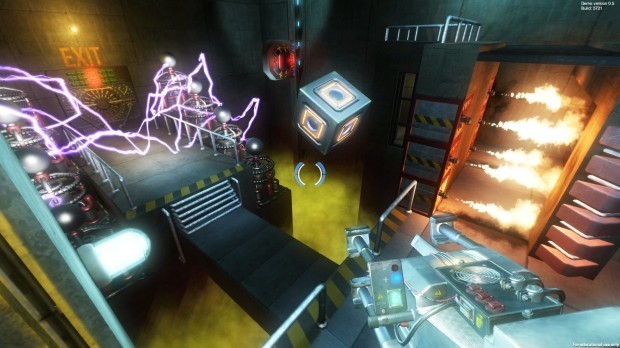 Stop me when this starts to sound familiar: You are a female prisoner in a test facility that is run by a mysterious entity. You are given a gun that warps the laws of physics, and forced to solve a series of puzzles using said gun. You are spoken to over a loudspeaker by the psychopath in charge, as you use cubes and buttons to make your way through each trial. Then at some point you break free from the puzzles and turn the tables on your captors. Is this starting to ring some bells?

Magnetic: Cage Closed takes place in a prison facility that uses inmates on death row as test subjects for deadly puzzle-based experiments. The player is given a magnet gun that can push and pull certain objects, which is instrumental in solving the series of magnet-based puzzles that await her. The warden of the facility informs the player that if she fails to solve puzzles, she will be executed immediately, but if she solves all of the puzzles, she will be set free. However, it’s plainly obvious from the get-go that the staff have no intention of ever letting you go, and simply intend to make you solve puzzles until you’re dead. Why the prison facility is performing these experiments, or why the experiments are a guise for murdering the inmates is not explained. Needless to say, Magnetic: Cage Closed is not an original game, and that’s just the beginning of its issues.

The puzzles in Magnetic: Cage Closed are not challenging or unique. The player uses a magnet gun to push and pull things, and most puzzles involve moving cubes onto buttons to open the door to the next room. On the rare occasion that a puzzle presents some level of difficulty, it has more to do with the mechanics/controls than it has to do with figuring out a solution. For example, whenever I found myself taking a while to solve a puzzle, it was because I was trying to shoot a cube across a room to hit a button, which was difficult to aim.

As I mentioned already, the story in Magnetic: Cage Closed is not a strong one, but this is made worse by some pretty tragic voice acting. The voices that monologue at the player throughout Magnetic: Cage Closed are monotonous, poorly written, and don’t do a good job at enhancing the story. Worse still, are instances where the player dies and has to listen to the same lines of dialogue multiple times before besting a puzzle.

Although the story and voice acting have their issues, there are sections at the end of each act wherein the player is asked to make a choice between a few paths, and their choices lead to different outcomes. The first few choices don’t have very big consequences, but the final choice leads to a completely different set of puzzles and ending. This was a pretty interesting element in an otherwise disappointing narrative.

The sound design and visuals in Magnetic: Cage Closed are also fairly subpar. The score is somewhat repetitive, and entirely forgettable, and the textures are very simple and undetailed, which gives the game a very plain look.
Magnetic: Cage Closed also features a great deal of waiting. At the end of each level, the player must wait for an extravagant vault door to unlock, and then must wiggle through a crawlspace while the next room loads. During certain sequences of dialogue, the player is given nothing to do except stand and listen to the dialogue until it ends. These sorts of events happen on a regular basis throughout Magnetic: Cage Closed, and don’t help improve the title’s overall excitement.

Magnetic: Cage Closed is a generic puzzler with an uninspired premise, which is only compounded by a second-rate story and laughable voice acting.

You know that jerk online that relentlessly trash talks you after every kill? That guy was probably Travis "Tie Guy" Northup. Competitive, snarky, and constantly wearing a tie, Travis has been writing his opinions about electronic media since he was a teenager, and is pretty much the only person to hold his opinions in high regard.
Related Articles: Magnetic: Cage Closed
Share
Tweet
Share
Submit