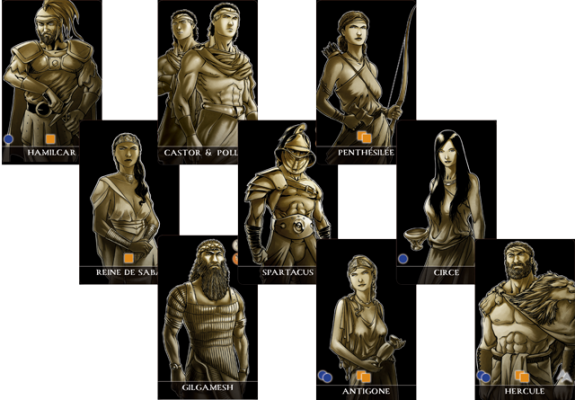 I do not expect to finish a first play awestruck by the experience, but my initial playthrough of Mare Nostrum: Empires took on a legendary status. Five players, a mixture of veteran and newcomers, sat down to run through the game in an effort to learn the system. A two hour game stretched to four as players mastered the rules and countered their opponents.  Each player had moments to steal victory until one player emerged triumphant. Afterward, each in turn leaned back and echoed the same thought, “That was a fantastic game.”

Mare Nostrum is a civilization game set in ancient times and centered around its Latin namesake, the Mediterranean Sea. Romans, Carthaginians, Greeks, Babylonians, and Egyptians all vie to build the greatest of empires. Greatness has many paths, and victory may come through military might, shrewd trading, empire dominance, or the construction of the Great Pyramid. Each empire uses its strengths against the well-balanced opponents. For example, the expansionist Babylonians must be mindful of the trade adept Egyptians, with each keeping an eye on the militaristic Romans. The numerous variables and powers ensure a new experience with each play, though initial strategies feel scripted based on the power’s ability.

You begin the game with a few regions which contain cities and resources. Cities provide gold which can doubled with the building of temples. Resources can be doubled with markets, but the use of commodities requires more explanation. Resources, from the common wool to the rare perfume, scattered around the sea must be collected. You can’t specialize as your goal is to collect as many unique resources through an engaging trading system. Resources themselves do nothing. Instead, your goal is to collect as many different resources as possible. This is done through an engaging trading system.

Players trade with each other in attempt to collect as many different resources as possible. You select a resource from another player who then selects a resource from either you or someone else, though you can only go back and forth between the same player once. A game within the game develops as players try to snag a resource they don’t have or prevent someone else from collecting a rare commodity. If players plan it right, they can even freeze out a leader from obtaining that final resource needed to close out the game. It’s a fascinating way of trading and vital to each player’s long term goals.

Resources are important as you purchase buildings, units, heroes, and the Pyramids through collected sets. Two types of sets can be created: ones created using nothing but gold and ones put together by using unique resources. Gold is useful, but the resource sets acquire the game’s high end purchases of heroes and the Pyramids. You begin with one hero and may buy a second for a set of seven resources. Each subsequent hero costs one more than the last and you can win the game if you purchase five heroes. Purchased heroes are more than just for show, as each provides a bonus for your empire. For example, Spartacus allows you to build legions cheaper while Circe allows your legions to act as caravans. Heroes can turn the tide of a game, as I found out all too well. During my game, I had enough resources to build the Pyramids, which results in an automatic win, but victory was snatched away as my opponent had Perseus, who grants the owner the chance to build first. He went first, built his last hero, and won the game.

Do not assume that a peaceful path to victory comes without conflict. You can certainly win the game without attacking, but be prepared to defend your position at some point. Legions, triremes, and fortresses populate the purchase list. The map isn’t spacious enough to keep you safe, so paying attention to an opponent’s army is a must. Battles are straightforward: Special dice are used both land and sea battles. One die is rolled for each unit in play, and hits are awarded for each multiple of five rolled. Defensive minded fortresses act as an automatic hit, and heroes like Pericles can add bonuses to a battle. The battles are fun, but this is not a war game. Warmongers should be warned that empires are limited to the number of legions that can be purchased. Aspiring Napoleons will quickly overextend themselves and be vulnerable to counterattacks. Still, a military path is a viable option, especially for the Romans and Greeks, as it takes only four cities to earn a military victory.

Plenty of heroes from antiquity are available to enhance your empire.

At the end of each round, a leader in each of the game’s three major phases is determined. For example, you can become the trade leader by controlling the most caravans, markets, and heroes with trade bonuses. This advantage allows you to set the number of resources to be traded each round. Cultural leaders have the most cities and temples and may build first, while military leaders are those who have the largest army. If any player is the leader in all areas at once, they win an automatic victory. With each empire having unique strengths, it’s difficult to control all three areas. Hammurabi has the best chance, but that can put a target on his head.

A game that has many paths to victory, multiple leader controls, epic battles, and resource trading has to be excessively complicated, right? Actually, it’s not. The newest player in our group picked up the game and become competitive during our first playthrough. The colorful rule book is full of examples, the math for battle and set completion is simple to determine, and easy to understand explanations of heroes’ abilities are on their respective card. Yes, there’s a lot going on in this game, but the game’s depth isn’t overshadowed by complexity. Our epic game is not the norm, and games will typically run in under two hours. Simple and deep may be an oxymoron, but it’s apropos here.

Some pieces, like the great looking legions, come with the game. Others, like building upgrades, are an additional price.

All this, and the game is beautiful to boot. Each empire has a unique helmet sculpt to represent its army. The map is colorful yet clear, and the standard resource tokens do the job. The dice are a nice touch with Roman numerals replacing standard numbers. Academy Games had several upgrades available when the initial Kickstarter launched. Some, like the larger map, may be worth it, while others, like poker chip style resource tokens, are more style than substance. None of the upgrades are really needed though, as the game looks fantastic in its original format.

What makes Mare Nostrum a successful title is that it allows you to have the game experience you want. Prefer a peaceful path to victory? It’s there. Want to unleash your inner Caesar? You can certainly try. Fancy yourself a shrewd trader? Perhaps every game won’t be a memorable epic, but each playthrough will be a rewarding experience thanks to its smooth gameplay, incredible presentation, and variable player powers.

Mare Nostrum: Empires has a lot to offer players of all genres. Multiple paths to victory and unique player abilities ensure that each game feels fresh. The set collection trade system is a game in itself. Combat is present but doesn't dominate play. It's a fantastic sandbox experience, allowing you to try different tactics in the hopes of building a dominating empire.