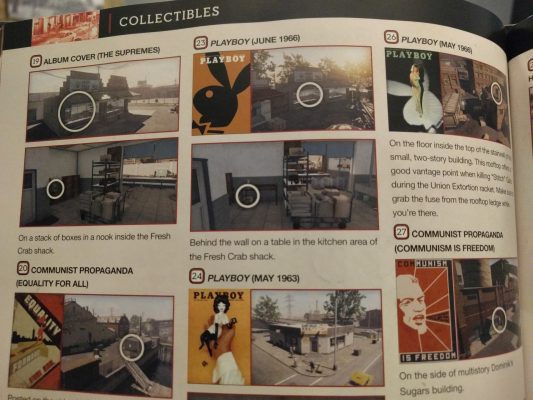 Mafia III tells the story of Lincoln Clay, a young black veteran of the Vietnam war. After coming home, he finds that his family is embroiled in a war of escalation with a local Haitian gang. Across 28 story missions and a vast array of side content, the single-player narrative-driven storyline is immersive and impactful. However, with a city as large as New Bordeaux, it’s pretty easy to get lost.

The 300+ page Mafia III Prima Guide opens up with the basics, as most game guides do, giving you a sense of the controls, navigation, and the general mechanics at play. Movement, lockpicking, wiretapping, and fighting are joined by instructions for the minimap system, item use, and a few pages on how to approach building Clay’s empire. There is also a handy six page inventory of the weapons and their various traits such as damage output and accuracy. Similar to the weapon catalog, ten more pages of the guide are devoted to showcasing all of the vehicles you’ll encounter in the game, and how you can obtain the six upgrades applicable to each.

Mafia III has the best collectibles.

The narrative of Mafia III is told in a documentary style with a blend of cutscenes and masterfully blended in-game content. It’s very reminiscent of the movie American Gangster (if you want to get in the mood for this game, I highly recommend watching it). The guide displays snippets of these moments like pictures in a scrapbook, flanked by maps and callouts that provide information on collectables and further explanations on game mechanics. Spanning 206 pages of the book, the Mafia III Prima guide outlines each mission, optional triggers, and collectables, as well as revealing any prerequisites and predecessors to each objective.

If it vrooms, it is detailed here.

Perhaps the only detractor to this guide is that it isn’t all that necessary for the main narrative content. The game is fairly linear, leaving little room for decision or interpretation beyond the optional side content; in that way, the bulk of the guide’s focus is more informative than necessary.

Mafia II gave us real-life collectables in the form of Playboy magazines and mobster wanted posters. Mafia III expands this immersion with several more completionist prizes to collect. Playboy magazines return (50 of them to be exact, now with flippable pages and articles), but added to the mix are 33 Vargas paintings, 12 Hot Rod and 5 Repent magazines, 30 LP record albums, and 31 Communist propaganda posters. While these are revealed on the map by wiretapping the 89 junction boxes throughout the districts, the Prima guide provides a little more granularity around how to access the sometimes hard-to-reach boxes and items. Beyond the collectables, there are also detailed maps of each district in the collectable section, providing a reference for when are planning your next business shakedown.

The interactive eGuide maps are useful for finding goodies.

Proceeding the one-pager on Achievements (and how you might unlock them) lies a section called The Maguire Files that is exclusive to the Collector’s Edition of this guide. Again, reminiscent of American Gangster, this section includes secret files which could be on any detective’s corkboard that might be investigating Clay and his mafia family. Postcards, magazine clippings, FBI wanted posters, paper clipped photographs, and often-redacted evidence files are on display across 32 pages, adding an artbook feel to this already-extensive guide.

The CE has a whole section devoted to concept artwork

The Collector’s Edition version of the Mafia III Prima guide is, of course, hardback, but there’s an added bonus to the physical version. Like most Prima guides, the Collector’s Edition comes with an eGuide version, letting you access it via your favorite mobile device. The eGuide version is as detailed as the physical book, but with the added bonus of being searchable and interactive. This gives a Google Maps style interface for your collectable gathering efforts. Beyond the eGuide, there’s also another physical goodie in the mix — a 14-month calendar.

The CE comes with a 14 month calendar of concept art.

Featuring concept art from developer Hangar 13, the calendar shows federal holidays, daylight savings time, and celebratory days like Father’s Day. Between June and July it also has a full two-page spread of the game’s cover, featuring Clay and some of his lieutenants on top, with his Samson Drifter musclecar running down one of his foes on the bottom.

Packed from hardbound cover to cover, the Mafia III Prima Collector’s Edition guide offers up a wealth of information. While the main mission items aren’t as necessary, the collectables guide and included artwork and calendar make it worth the price of purchase.

Ron Burke is the Editor in Chief for Gaming Trend. Currently living in Fort Worth, Texas, Ron is an old-school gamer who enjoys CRPGs, action/adventure, platformers, music games, and has recently gotten into tabletop gaming. Ron is also a fourth degree black belt, with a Master's rank in Matsumura Seito Shōrin-ryū, Moo Duk Kwan Tang Soo Do, Universal Tang Soo Do Alliance, and International Tang Soo Do Federation. He also holds ranks in several other styles in his search to be a well-rounded fighter. Ron has been married to Gaming Trend Editor, Laura Burke, for 21 years. They have three dogs - Pazuzu (Irish Terrier), Atë, and Calliope (both Australian Kelpie/Pit Bull mixes).
Related Articles: Mafia III Prima Guide
Share
Tweet
Share
Submit