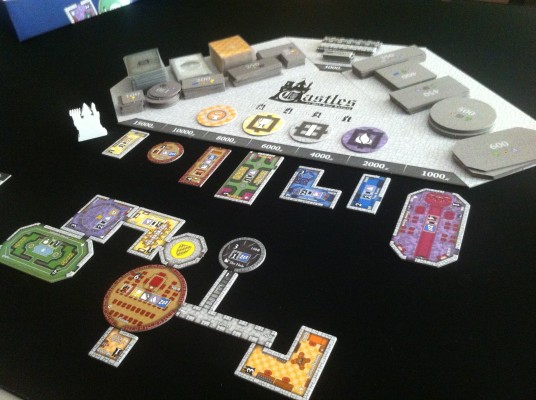 Castles in contemporary culture are almost invariably associated with a certain skew towards the less than sane. They occupy a strange corner in our architectural imagination, somewhere between Arthurian nostalgia for the medieval and the dark whimsy of old fairy tales. They almost construct themselves in our mind’s eye the moment we think of them, setting a mood and sense of place that induces us to fortify against some imaginary onslaught and expand inward, room by room, at our luxury.

Castles of Mad King Ludwig attempts to tap into this allure in an obtuse way by revisiting an earlier design, Suburbia, which garnered much of its success by interpreting core aspects of Sim City into a board game. Castles leverages the urban expansion engine of its predecessor while cutting back on some of its complexity and depth in favor of its most approachable aspect: tile placement. While players of Suburbia enact a sedately planned suburban sprawl through zoning for victory point synergies and carefully balancing growth and economy, they occupy a simpler, more improvisational role in Castles of Mad King Ludwig.

In each round, players expand their individual castle with a single room or enclosure tile. These are selected from a set of rooms of different shapes and sizes that are put up for sale on a “contract board” comprised of five to seven different price slots. Each of these rooms provides meager points unto itself but connects to several other point systems which can shift from turn to turn. These include adjacency bonuses/penalties, secret individual goals (e.g. have the most square footage of sleeping spaces), randomly selected achievement bonuses or “favors” for each game, and “completion rewards” for connecting all doorways in a room. These rewards in particular can be quite powerful as they allow players to bend the game rules (e.g. manipulate the next set of rooms for sale, or take an extra turn) or get substantial boosts in VP or income. Placing a room instantly awards points from these systems, often chains of them, which can feel like the satisfying leaps of bonus points in a pinball machine. This appeal lends itself to some unconventional room placements which are right in line with the “mad king” spirit of the game.

But each of these rooms, each of these triggers for the player’s elaborately planned cascade of points, has a monetary price. So how is this price set, and how do players make their money? These are both addressed by the clever use of the old technique of “I cut, you choose,” which brings an element of interaction between the players.

Each round begins by passing the role of “master builder” to the next player who replenishes the rooms on offer and assigns them to different price tiers on the market. Everyone’s payments go to the master builder for the turn but with a catch: the master builder is the last to select a room. This puts the master builder in a precarious position, balancing the affordability of these rooms to meet conflicting goals. She would prefer her room of choice to remain unselected without pricing herself out of buying it. However, this requires monitoring what opponents might want in order to ensure at least a couple of purchases, without also awarding rooms that would give opponents too much of an advantage.

This aspect of the game may set off analysis paralysis alarms until players are reminded that some of the bumpers in the pinball machine are in fact invisible: everyone has hidden objectives that can derail the best laid passive aggressive plans. Nonetheless, this can be a jarring element in the tempo of the game, giving careful pause between bouts of crazy room placements. Perhaps this is another echo of the madness of the king, alternating between shrewd manipulation of the labor market and the reckless joy of laying out elaborate room plans to suit his whimsy. While this particular contrast works for the most part there are a few less intentional, and less successful, inconsistencies in the design.

After completing the first few games it occurred to me that the art on the box cover is an order of magnitude more evocative than the game itself. This isn’t unusual in board games, but it made me realize that this discrepancy didn’t exist with its predecessor Suburbia, underscoring some aesthetic issues in this game that may disappoint some players. Suburbia’s intentionally sterile visual style had a businesslike “urban idyllic” quality that befit the subject of suburban planning and lent itself to the readability of the game. But it seems as if this same style choice was ported unquestioningly to Castles without enough consideration for the smaller, closer scale of the game, or for the unique sense of place and theme that should be felt by the player when building a castle rather than a suburb.

Looking at a tile layout in Castles of Mad King Ludwig often feels more like staring at the dull architectural schematics for a mansion. The tile art is devoid of inhabitants, though their furniture and other belongings are meticulously composed in a perfect overhead angle, making visual details rather geometric and abstracted. There are a few props here and there to justify the name of a room: some pots (grey circles) on a counter (brown rectangle) in the food prep room, some manacles in the oubliette (black circle). But few tiles, with the exception of some of the larger ones, carry a sense of place or uniqueness beyond their iconography and color-coded floors. This seems like a lost opportunity to have more fun with the art and visually convey the game’s implied whimsy instead of relying on room labels and the willingness of the player to fill in the oddly missing atmosphere.

The style of the iconography, while very readable, is also discrepant with a medieval setting, feeling more consistent with airport or road signage. This would be less noticeable if it didn’t often dominate the artwork on the tiles — especially the smaller ones — with a layout that can also be difficult to parse for a newcomer. Room types are indicated by a minuscule icon on the bottom left while the adjacency bonuses are front and center and much larger, which can lead to confusion while learning the game unless players are told that room types are also color-coded. The overall effect can lead players to stare at a puzzle of stylistically neutral icons and numbers instead of the bizarre castle underneath.

While the player’s castles have an element of pastel color-coding, the scoreboard and central board, which take up a comparatively large area on the game table, are entirely grey with an antiseptic, characterless cobblestone pattern; no shading, no signs of wear, no ivy. This scheme recurs on the inverse side of most of the game’s cards and all of its tiles, all of which are initially stacked on the same central mat. This creates a depressingly large swath of flat grey in the game, a color that, while certainly a dominant element in real castles, becomes abstracted and simplified to a dull, lazy visual shorthand.

These aesthetic hangups may seem petty but they create a cumulative sense of disconnection that drains just enough fun and atmosphere out of the game to become irksome. It betrays a subtle cluelessness about the appeal of castle-building, never completely bridging the schizoid gap between some of the game’s most satisfying mechanisms and its purported theme. This creates the impression that this design was an attempt at recapturing lightning in a bottle without completely understanding the thematic coherence which allowed that original success, a King Midas groping at game elements and coming back with dull architectural drafts rather than gold.

Some players will be predisposed to enjoy the feeling of building a castle and will look through the utilitarian art, the airport signage, and the muted color palette and invest some imagination into their crazy constructions. Those less inclined to do this may still enjoy the compulsion of maximizing their point bonuses or the perpetual “I cut, you choose” puzzle that occurs throughout the game. If neither of these aspects appeal, you probably won’t find any further hooks into the game, relegating it to an appropriately grey area in your collection: the “solidly decent” shelf, a dungeon the game could have easily escaped by indulging in just a little more of the madness of its own subject matter.