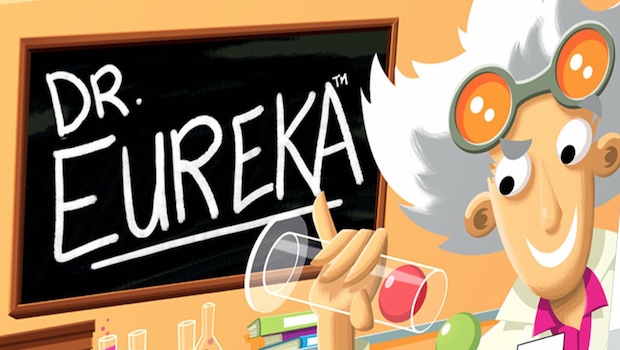 I’ve often lauded the benefits of using games as educational tools. The trouble is that purpose built educational games tend to lead to such titles as Fun with Language Arts or Spaghetti and Math Balls. The key for any title to be educational is that it must be a game first. If it’s not engaging, it’s not going to be any benefit in learning. Enter Dr. Eureka, Blue Orange’s pattern building game, which manages to entertain while secretly educating.

One to four players are competing to build a particular pattern first. They do this by moving colored marbles between plastic test tubes to create a pattern. Each player takes three test tubes and six marbles, two each of green, red, and purple. A card is flipped that illustrates the pattern that must be completed. Players then must not only deduce how to manipulate the marbles into the correct order but do so without dropping or touching the marbles. For an analytical person such as myself, simply figuring out how to get the pattern isn’t enough. Motor skills, my longtime nemesis, play a key role as well.

Maybe designer Roberto Fraga didn’t intend Dr. Eureka to be anything more than a game. On that level alone, it does pretty well. The race to complete the patterns is a real challenge, especially once you throw in moving marbles from one tube to another. There’s a bit of a rush as you try to roll just one marble out of a tube only to see another follow or, worse, see one crash to the table.

But Dr. Eureka succeeds beyond being just a game. It’s a mental exercise. Kids will certainly benefit from practicing motor skills and processing speed. Adults will find this a bit reminiscent of the brain game craze of recent memory, where quick tasks were completed to exercise the mind. With each pattern taking a minute or two to complete, Dr. Eureka can be a really versatile game, capable of entertaining a family at home, a solo experience, or students at a learning center in the classroom.

The drawback may come from your competition. Facing someone who possesses not only superior pattern skills but also nimble hands will result in defeat after defeat. Additionally, younger players or those with disabilities will have trouble with the small margin of error in moving marbles around. It would be nice to have one set of tubes with a small lip or something to help those with motor skill issues.

If I have a gripe about family games, it is that they tend to be geared toward kids with adults needing to take some liberties to either play down to the game or be interested in it at all. Not so here. Both adults and children will find the combination of speed and pattern solving to be a real challenge. Adults will work just as hard to keep up with the kids in this game.

Though it may be an inexpensive filler, Dr. Eureka is anything but cheap looking. The test tubes are well made enough to take the beating of being clanked together, while the marbles are smooth, bright and roll easily, perhaps too easily, from one tube to another. The game contains more than 50 cards of patterns to complete, but that’s a fraction of the hundreds of actual possibilities. It would have been great to see scaled challenges with even harder combinations requiring an additional marble color. The replay value is good, but I couldn’t help feeling there could be more. Still, for all that it comes with, and a MSRP under $20, it’s one of the best bangs for your buck out there.

One of my gaming friends has always said the mark of solid title is whether you felt like you got a good mental workout from it. Dr. Eureka is my favorite family game I’ve reviewed this year, because it gives both the young and less-young that feeling after you’ve played. Sure, as with many short games, moderation is best. Dr. Eureka doesn’t have the sustainability to show up on the table time and time again, but if you are a teacher wanting a unique approach on math, a parent wanting to give your child a fun way to learn, or simply like a quick challenge, Dr. Eureka is the perfect game.

Dr. Eureka is a very well-rounded family game, capable of challenging young and old alike. It's got quality components and has enough cards to keep it fresh with moderate play. Throw in a price tag of under $20, it is one of the best games to have for a family game collection.