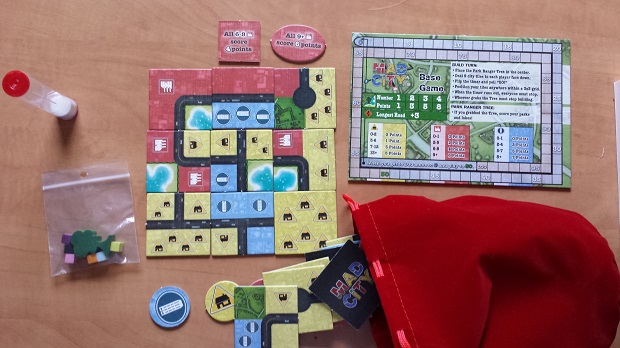 When you play games with the same group of people over a period of time, you start to see patterns emerge. You can tell who is good at picking up a new game and finding a winning strategy, who needs a few plays at a new game before truly understanding it, and who is good at certain genres. For example, I’m pretty good at worker placement games, but I will never win an area control game. After a while, you can predict with pretty good accuracy who is going to have a chance to win based on the mechanic of the game you are playing. For this reason, it’s fun to find a game with an underused mechanic that can shake things up in your gaming group. Most games involve taking time and strategising, and those people who excel at strategizing tend to win. When I opened up Mad City and realized that it was a real-time tile laying game, I got excited because the mechanic was something new and interesting. Maybe people who don’t excel at strategizing but are good at making quick decisions will have a chance to win.

The Good Part: The Premise

In Mad City, players take the role of city planners. Each player draws nine city tiles, which can be a mixture of Residential, Industrial, Urban, Lake, and Park zones. Some tiles also have sections of road on them. The goal is to arrange the nine tiles into a 3 x 3 grid that maximizes the number of points awarded. Points are scored based on the number of contiguous Residential, Industrial, and Urban zones, longest continuous road, and bonus park and lake zones. Players can also bet on themselves having the largest of a particular zone and score bonus points.

The real novelty of the game comes in the fact that all players simultaneously place their tiles within a one minute time frame. Players must place their tiles in such a manner as to maximize the number of contiguous zones and roads, while keeping an eye on the other players to determine if a bet is worth making, all within one minute. In addition, the wooden tree is set up in the middle, and the first person to grab it is eligible to score their park and lake tiles. The skill highlighted here, being able to quickly and efficiently arrange tiles while keeping tabs on everyone else, is, while not unique to Mad City, uncommon to board games. It felt good to flex those quick-thinking muscles.

The Bad Part: The Gameplay

While I enjoyed the minute-long stretches of frenzy, I sadly did not enjoy the game overall. A couple of flaws really drag down the enjoyment of this game. First, the time in-between turns ends up being considerably longer than the turns themselves. By the time everyone scores their tiles, determines longest road, figures out who bet on what and who wins and loses those bets, adds up all their points, puts all their tiles in the bag, mixes the bag, draws nine new tiles per person, and flips them all the correct way, enough time has passed to seriously hinder the flow of the game. The scoring isn’t so bad, but I wish there was a better way to collect, mix, and redistribute the tiles in a timely fashion.

The second flaw is that a minute ends up being longer than most players need to arrange their tiles. Things felt hurried at first, but by the end of our first game, no one really had trouble with maximizing their scoring in the time allotted. Most players even had time to methodically count all of their opponents’ zones to compare against their own, so bets weren’t a risk. This obviously won’t be a problem with younger and inexperienced gamers, but we definitely noticed that things weren’t as frantic as they were meant to be.

Another flaw, which ties into the time, is the way that the tree is handled. The only person who can score their park and lake tiles on a given turn is the person who grabs the tree first. The downside is that, once a player grabs the tree, they are not allowed to rearrange any of their tiles. But the other players are allowed to rearrange their tiles within the remaining minute. Being able to score lake and park tiles is quite a bonus, so players scramble to maximize the value of the park and lake tiles, and someone inevitably grabs the tree early on. The problem is, once the tree is taken, the other players have plenty of time to rearrange their tiles, disregarding the park and lake tiles and maximizing the value of the other tiles. There’s no real penalty for trying for the tree and failing to get it. Another problem is that the tree is only eligible to be taken by someone who has not reached halfway on their scoring track. This is designed to have everyone compete for it in the beginning but later on as players pass the halfway point, the tree is a catch up mechanic for those who are lagging behind. That’s fine, but the rule also serves to make park and lake tiles completely irrelevant for the second half of most games.

The Meh Part: The Theme

The final flaw of Mad City is that the theme falls flat. There’s just nothing to get excited about here. The box and instructions have some cute animals on them, but the game itself has a bunch of zoning symbols on the components, and little else. Let’s be honest, zoning a city isn’t exactly a theme with pop, is it? Theme shouldn’t make or break a well-designed game, but it absolutely factors into a player’s engagement with the game. Mad City would be greatly enhanced with a more engaging theme. Counting up Residential and Industrial symbols just didn’t provide enough excitement.

I take no joy in writing a critical review of Mad City. I really did enjoy the part where I was frantically laying tiles. And, for the record, my theory about the mechanic utilizing a different-than-usual skill set and shaking up the status quo of my gaming group was proven correct, as someone who almost never wins (me) was able to win. POW! But even my awesome and totally-deserved victory fell flat, as none of us really enjoyed the game that much. The aforementioned flaws are just too much for the fun mechanic to overcome.

Weight: Light-Medium – Easy to play, but scoring is a bit complicated

There’s simply not enough of the good in this game. The tile laying is fun at first, but the downtime between turns and the uninspiring theme eventually lead to disengagement. Players improve their tile laying prowess as the game wears on, making the tile laying less fun. A boring theme provides a flawed game no help at all. I can’t imagine feeling the urge to pull Mad City off the shelf again any time soon.