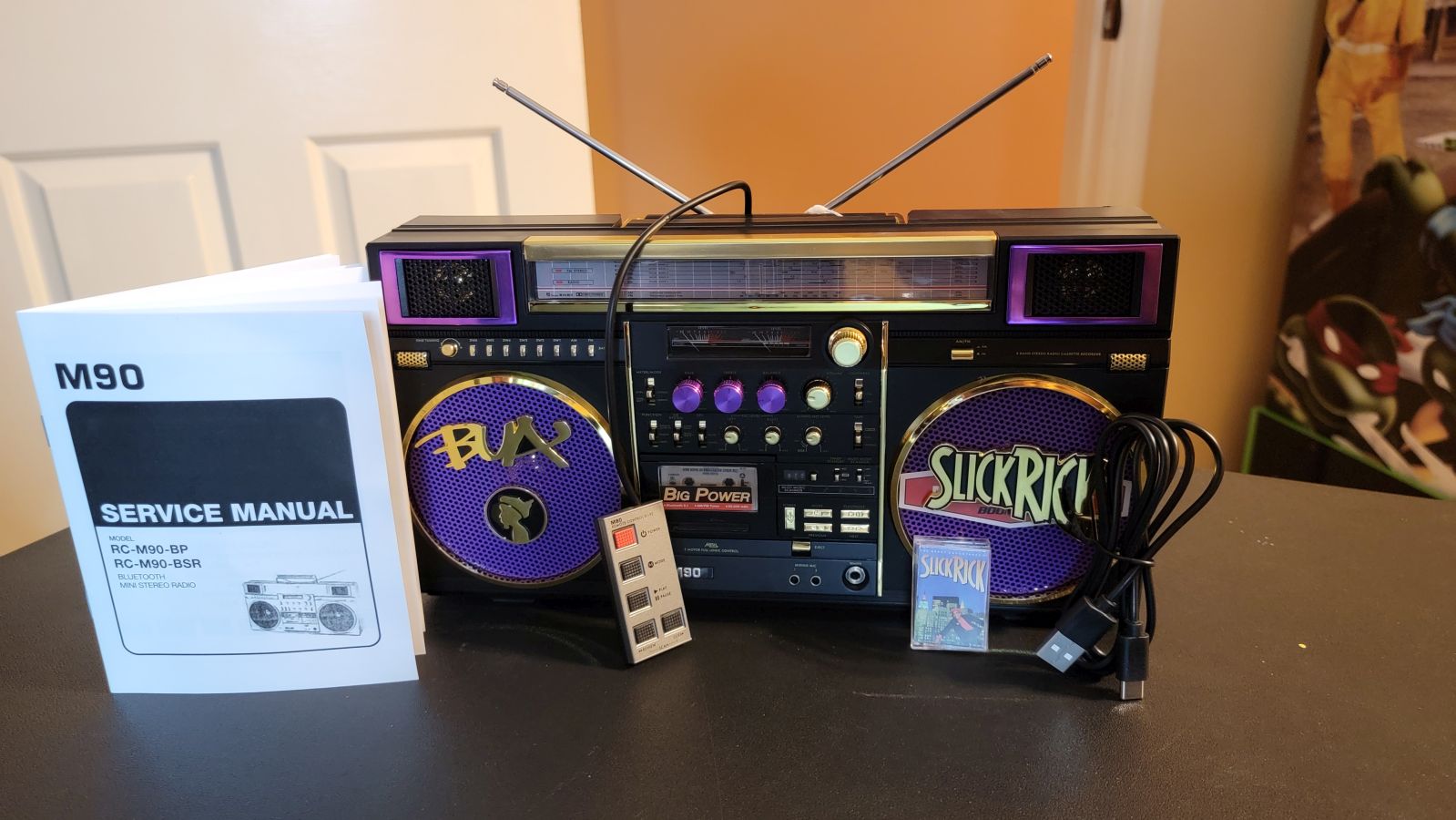 New Wave are well known for their mini arcade series, known as Replicades, but lately they have begun branching out and creating high-quality working miniature versions of other items. With their latest target, 80s boomboxes, they have created a visually stunning working replica available in two sizes, the M90 Mini and M90 Micro, both of which are capable of Bluetooth pairing, with the Mini sporting a slew of additional features, and both featuring surprisingly great speakers, allowing you to take the party with you anywhere you go.

Since these are two separate products available for vastly different prices, each will receive its own review. You can read my review of the M90 Micro here. Let’s look at the M90 Mini Blaster Artist Series BUA & Slick Rick Boombox. 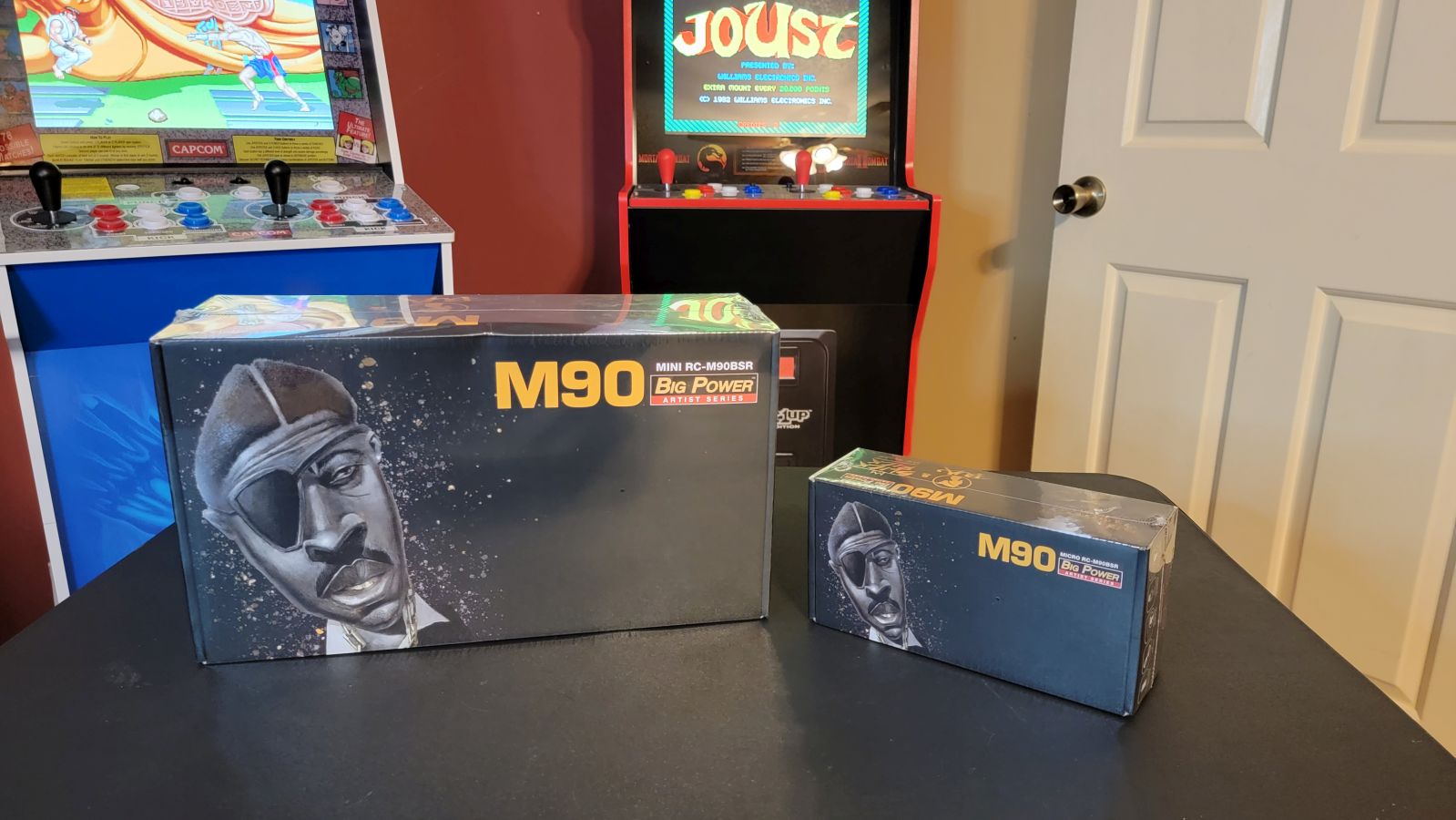 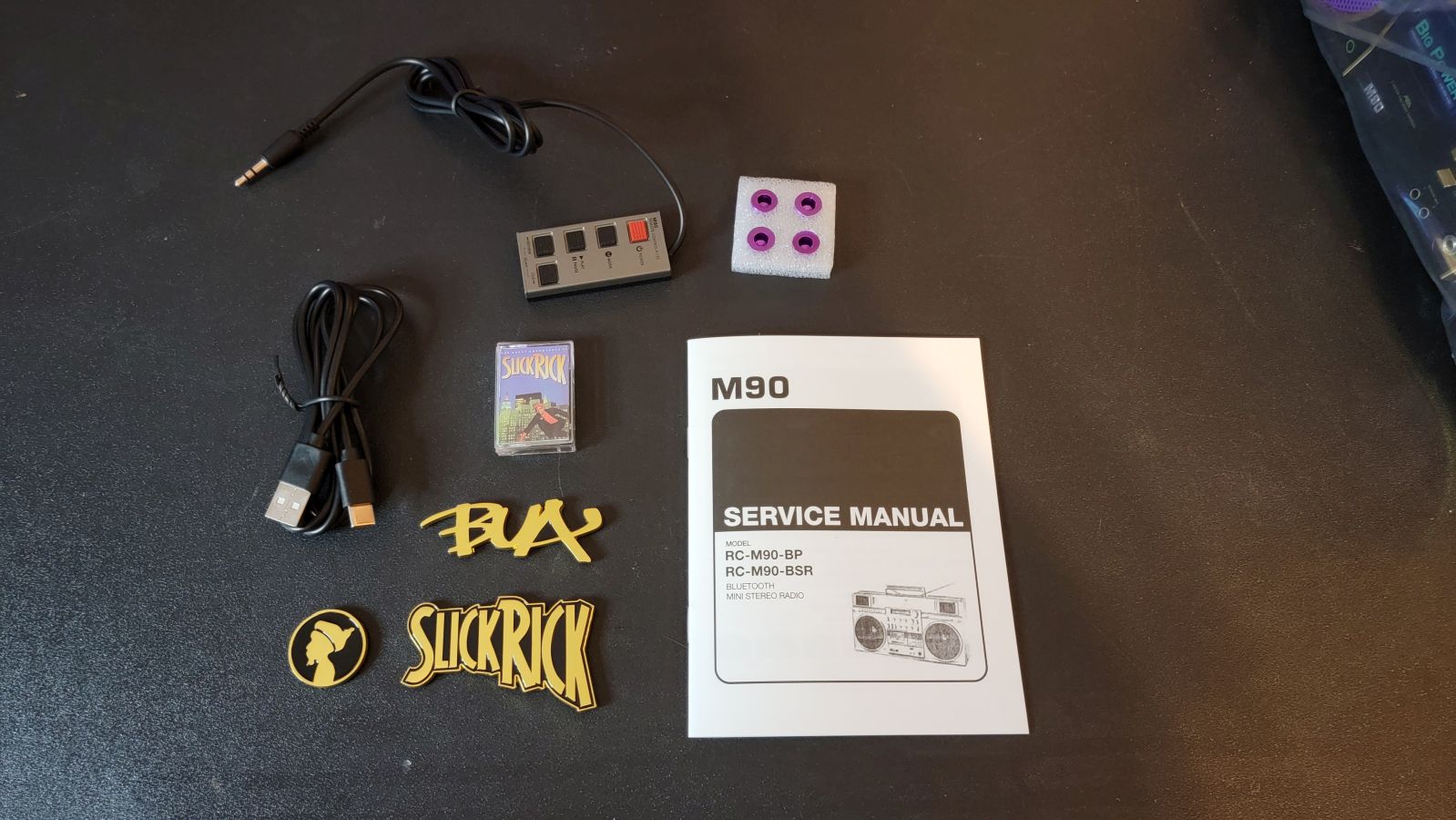 The M90 Mini is a feature rich boombox replica, able to connect to devices via Bluetooth or line-in, while also sporting an AM/FM tuner. This accurate recreation of the iconic King of Boomboxes is small, but powerful. At only 11” long, 3” wide, and 6” tall the M90 mini is capable of delivering 30 watts of power from its two 3” speakers, while also allowing users to adjust both bass and treble tone.

Let’s dive into the features. I’d assume that the most used feature of this product will be the Bluetooth 5.1, and I’m happy to report that connecting to the M90 is incredibly simple and takes mere seconds. Simply turning on the M90 will allow you to pick out the bluetooth signal from any Bluetooth capable device and pair immediately. Once paired, you can control the music via your device or by using the play, pause, forward, and previous buttons on the M90’s panel. There was no input lag or delay between the M90 and any Bluetooth connected device, and using the control panel’s buttons worked fantastic for those who may want to have their device streaming from an area separate from the M90.

The inclusion of an AM/FM radio tuner is appreciated and the M90 Mini is a surprisingly adept radio. Still, I found the reception to be great, thanks to the dual telescoping antennas, and turning on the radio is as simple as pushing the mode button on the M90 and then toggling the AM/FM button. A circular dial and a small bar that extends the width of the front of the M90 Mini makes selecting your radio station of choice simple. A small light on the left helps you find a clear broadcast, switching colors to indicate if a signal is weak, clear, or non-existent.

Finally, there are options for line-in via the 3.5mm aux audio input jack and MP3 via MicroSD or through the USB-A port. Line-in is simple and works like a charm. In all ways the line-in functions like the Bluetooth does, with users able to control via the connected device or by using the control panel. If you would rather connect via the USB-A port, then you can, or if you want the ability to play music without connecting any device then you can simply load up a MicroSD card with your favorite songs and insert it in the back. Overall, there is such a wide variety of ways to access music on the M90 that any consumer should be satisfied. 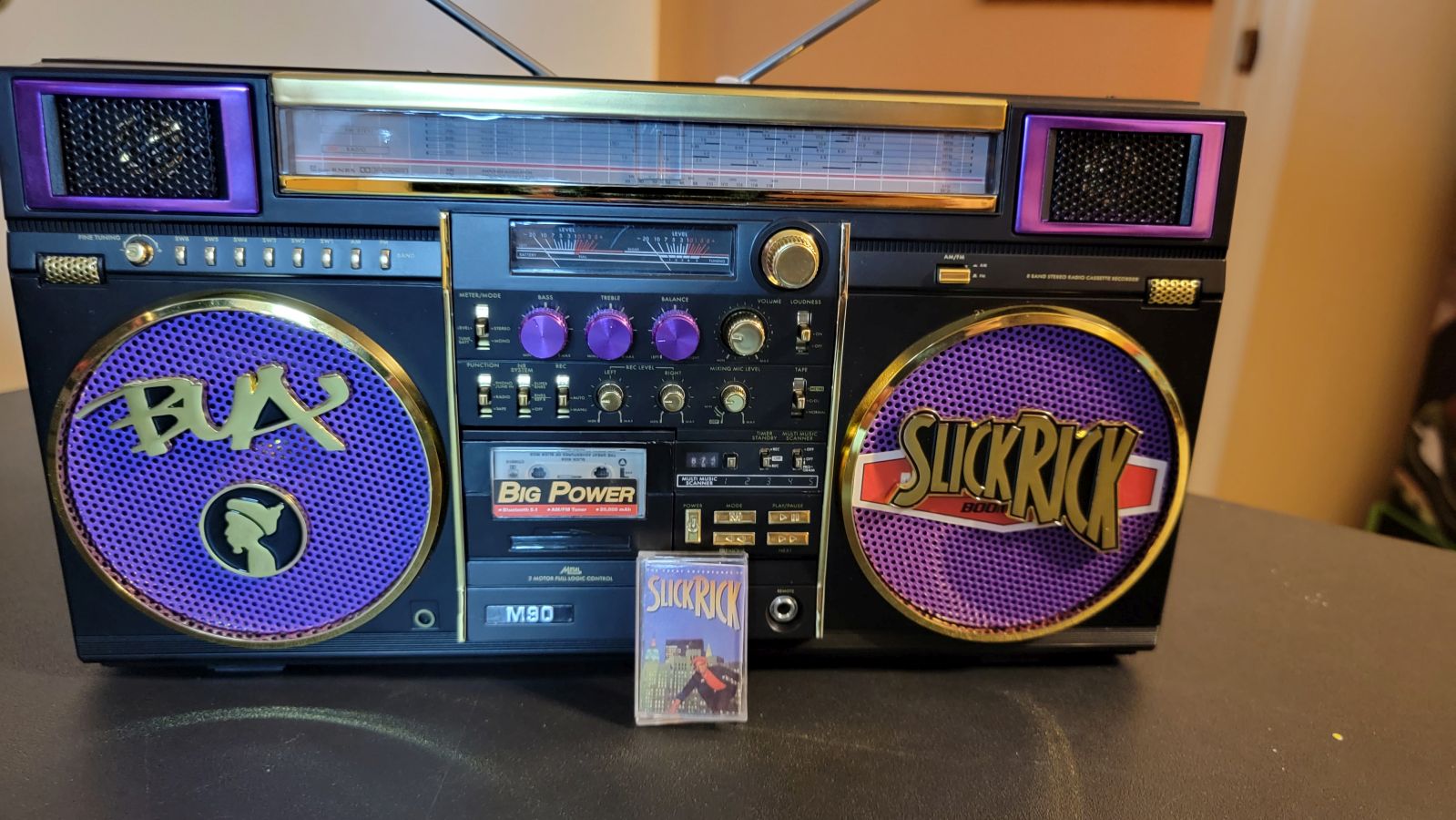 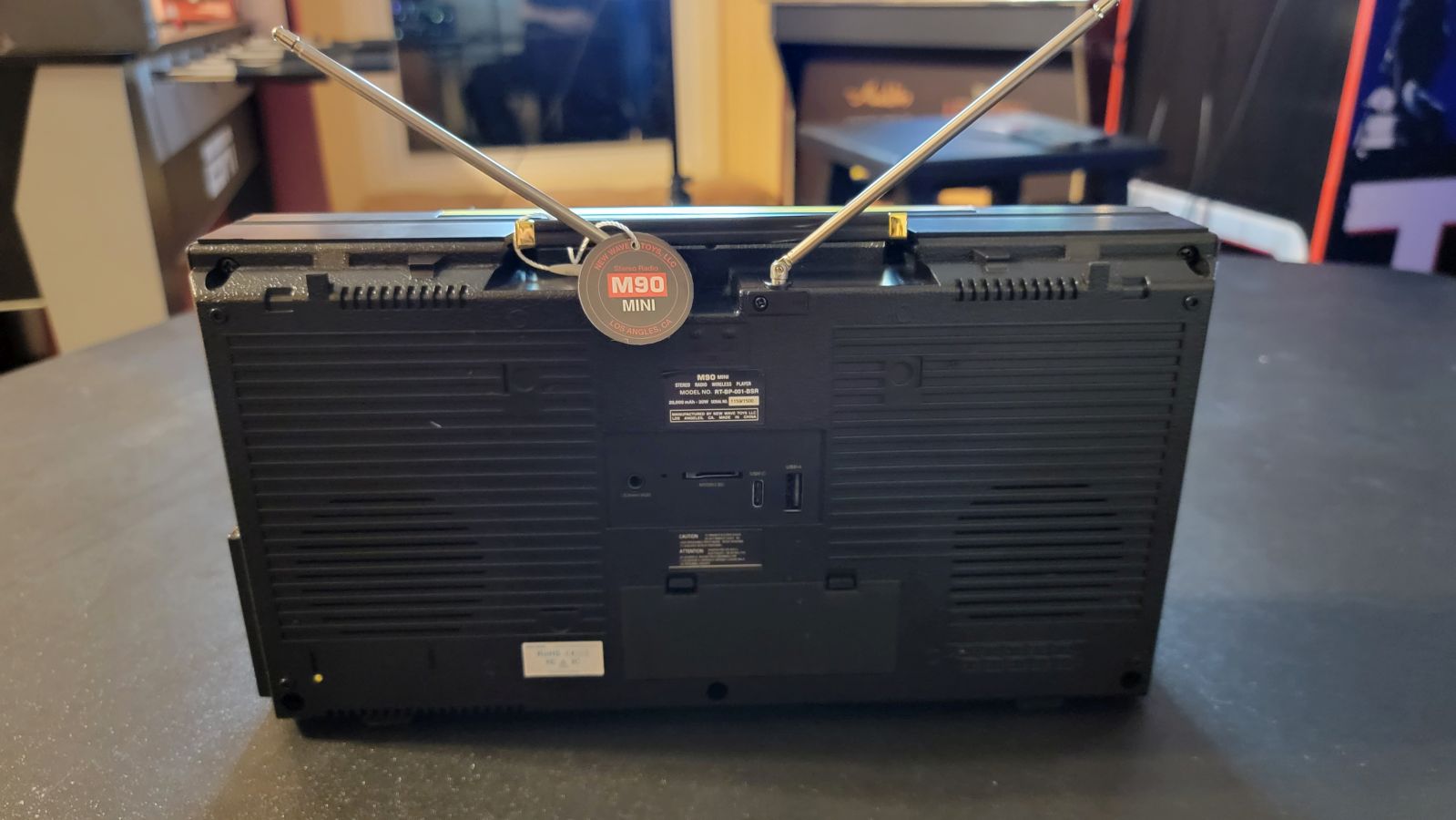 But New Wave doesn’t stop at just providing consumers with a variety of ways to play music, they also added a few features to up the overall realism of the product, including a mini tape-deck, a 20,000 mAh battery which can be used for up to 40 hours of playtime or to charge other devices via the USB-A port, a folding handle, a rear storage compartment, and the ability to connect two M90 Minis for a more surround sound experience. Rounding out the package is the inclusion of three Slick Rick and BUA magnets, purple tuner caps, and an awesome mini replica of The Great Adventures of Slick Rick cassette, which can be inserted into the cassette deck for added realism.

For such a small package, the M90 Mini is surprisingly heavy. Of course, not heavy enough that it would be a burden to carry around you with, but heavier than it appears. This is due to its superb construction and quality materials. I’m almost certain that this little boombox could take a beating and continue without issue. A surprising, but welcome addition, is the fact that all audio prompts are delivered by Slick Rick, with the power off prompt feature Slick Rick telling you “peace” as it shuts down. The boombox and packaging were designed by BUA and look fantastic, with the ability to attach the included Slick Rick and BUA magnets to the speakers to add to the overall aesthetic. 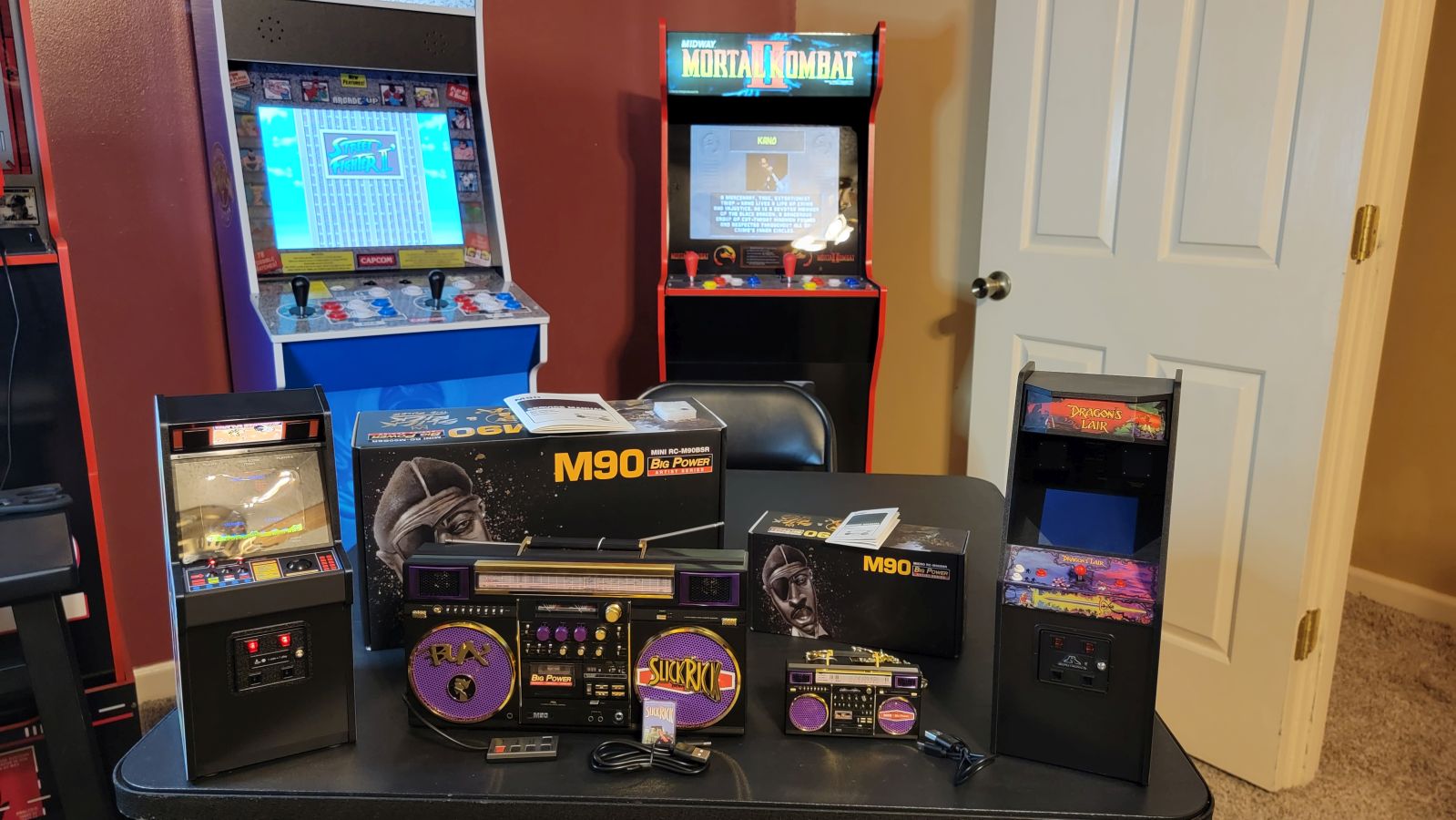 The only negative I have is that the M90 Mini charges via USB-A rather than Micro-USB, which is what most other New Wave products use. While this is not a deal breaker, it does require an additional plug if you wish to sit the M90 on a shelf with other New Wave products, rather than using one cable to charge all items. Still, the fact that the battery can then be used to charge other products is a nice addition and makes up for the switch in charging cables.

The amount of features included and the intricate design and materials make the M90 Mini Blaster Artist Series BUA & Slick Rick Boombox well worth the asking price, and is almost sure to be a point of attention when it is seen by others. Limited to only 1,500 pieces, I am almost certain the M90 Mini will quickly sell out. Also, for those who already own other New Wave products, I’m happy to say that the M90 Mini looks great on a shelf amongst them.

The ease of use, wonderful artistic design, wealth of features, and amazing sound quality makes the M90 Mini Blaster Artist Series BUA & Slick Rick boombox a reliable bet for those looking for a small but capable music player. While audio players are a dime-a-dozen, it’s rare to see one as well built as the M90 Mini, and the unique design courtesy of BUA and Slick Rick will almost certainly delight anybody who sees it, making it a surefire conversation starter.

Richard Allen is a freelance writer and contributing editor for various publications. When not writing for Gaming Trend you can find him covering theatre for Broadway World, movies and TV for Fandomize, or working on original stories. An avid retro gamer, he is overly obsessed with Dragon's Lair. Chat with him via @thricetheartist on Twitter and @richardallenwrites on Facebook and Instagram.
Related Articles: M90 MINI Blaster Artist Series BUA & Slick Rick
Share
Tweet
Share
Submit