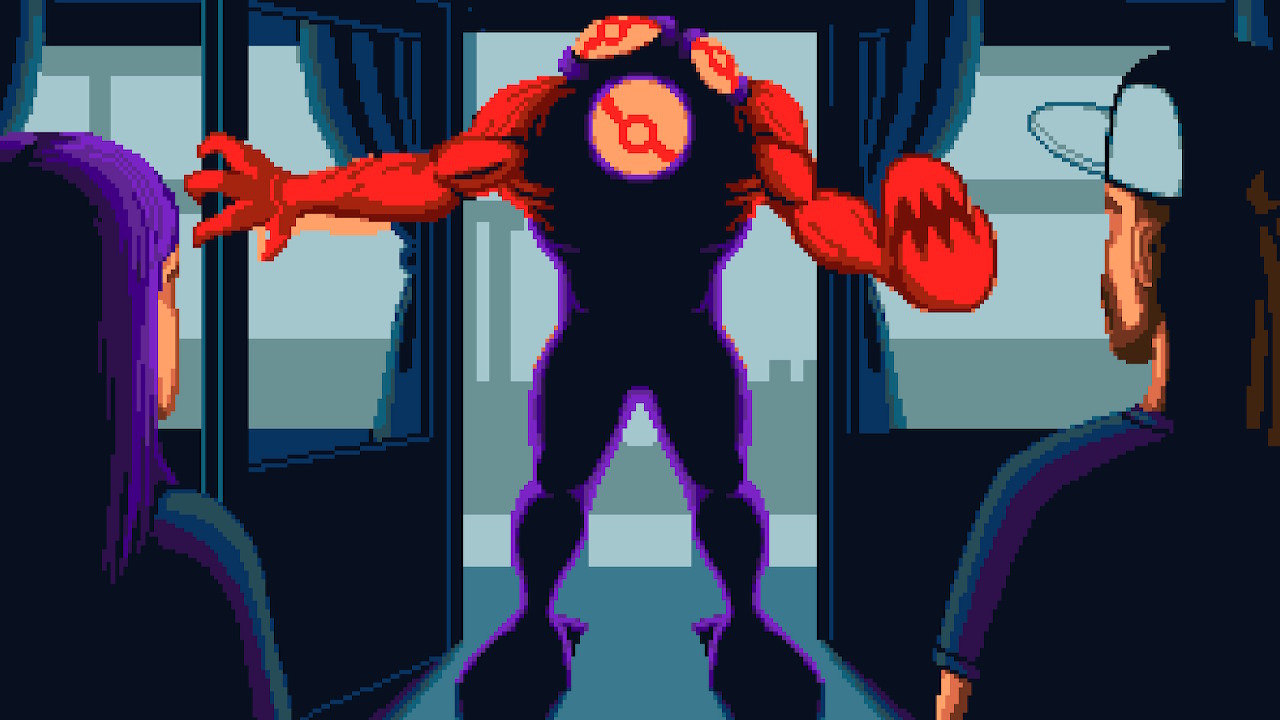 Baristas, extraterrestrials, heavy metal. These three elements combine in Coffee Crisis to create a uniquely themed beat ‘em up in the same vein as classic 90s beat ‘em ups such as Final Fight and Streets of Rage. But, is it metal enough to stand up to the greats, or does the caffeine quickly lead to a crash?

Coffee Crisis is a love letter to 90s beat ‘em ups with its own twist on the genre. You can play as Nick or Ashley, two coffee baristas with a serious grudge against the aliens that have crashed their coffee shop. The story is minimal, but that’s never the focus in these games, anyway. The heart of the game lies in its gameplay and the modifiers.

But what do these symbols mean?

Nick and Ashley play slightly different from one another. Nick appears to be a tad slower with a larger hitbox, while Ashley is more nimble. One button is for basic attacks, one for special attacks that diminish your health, one for jumping, and lastly, one for picking up items or holding enemies in place while you beat them with a coffee mug or throw them into another enemy. It’s a simple system that doesn’t rely too much on combos or unlockable secret moves, which in itself could be disappointing for anyone looking for a deep combat experience.

Hard to tell through the chaos, but a game-ending round of laser tag is happening here.

The modifier system, which can be turned on or off in the main menu, adds random “changes” to each playthrough. These modifiers are unknown until you reach them and they can either help you by adding something such as extra strength or health, but you can also (and more often) be impeded in your progress by something like a “laser tag” battle, which is just a hoard of enemies filling the screen accompanied by lasers. There are several non-difficulty altering ones that give camera effects such as a black-and-white TV screen.

Cool at first, annoying at second.

Each modifier is random, and as far as I’m aware, there isn’t a way to toggle specific ones. The only way to find out what a modifier does is by playing the game enough times to memorize what each one does. In a way, this system completely misses the point of modifiers, which is to modify games in a unique way, and instead relies on a random element to encourage longevity in a game that only takes about an hour to run through. In all honesty, the only people I’d expect to understand these changes and fully grasp how they affect the run are the developers.

I’m stunned that for the life of me I’m not able to figure out what exactly the modifiers do even though the game has such an emphasis put on them. But do you know who isn’t stunned? The enemies. Unlike other successful beat ‘em ups, some of Coffee Crisis’ difficulty comes from enemies not being stunned or reacting well enough when you hit them. This led me to taking safer approaches such as jumping and diving into the enemy, especially when I was swarmed by them, which happens far too often.

A hoard of enemies in the mist that don’t want to react to my punches.

There’s also plenty of confusion when it comes to the UI. Where I thought the health bar should be was a combo meter keeping track of your hits. This, for some reason, takes priority over the small health “circle” surrounding your fist in the top left corner. This is often difficult to see, which can lead to me making rash decisions such as using special attacks that use health for some other reason when health is hard to come across even on easy.

These minigames happen between certain levels, giving the victor an extra life.

One thing I did like about Coffee Crisis is its art style. The sprites are charming, and Nick and Ashley are both fun characters with good reactions and great spritework. The style of the game oozes 90s beat ‘em up and metal. The enemies are creative as well, leading to hostile grannies with walkers in a hoard of aliens with one alien even being reminiscent of Dr. Xavier from the X-Men.

And you can chuck grannies across the screen.

Coffee Crisis has all of its pieces together to become a good game, but it’s not there yet. The modifier system could be reworked into something that allows players to actually modify the game they’d like, hit stun can make the difficulty spikes seem more bearable, and the UI could show health more prominently. But for now, Coffee Crisis is just a little bit of steamed milk and a pump of chocolate short of a good mocha latte.

Coffee Crisis takes the interesting concept of the classic beat ‘em up with a metal and coffee theme and attempts to run with it, only to trip over itself with a questionable implementation of modifiers that can’t be selected normally, as well as bare-bones combat. All of the pieces of a quality beat ‘em up are present in this game, but it’s not quite put together yet.

Sean Anthony likes to combine two of his passions: gaming and writing. Gaming has been a huge part of his life ever since he played his first game as a child, Kirby's Adventure. He aspires to have his name attached to an article that makes the whole world go, "Huh, that's neat, I guess."
Related Articles: Coffee Crisis, Indies
Share
Tweet
Share
Submit