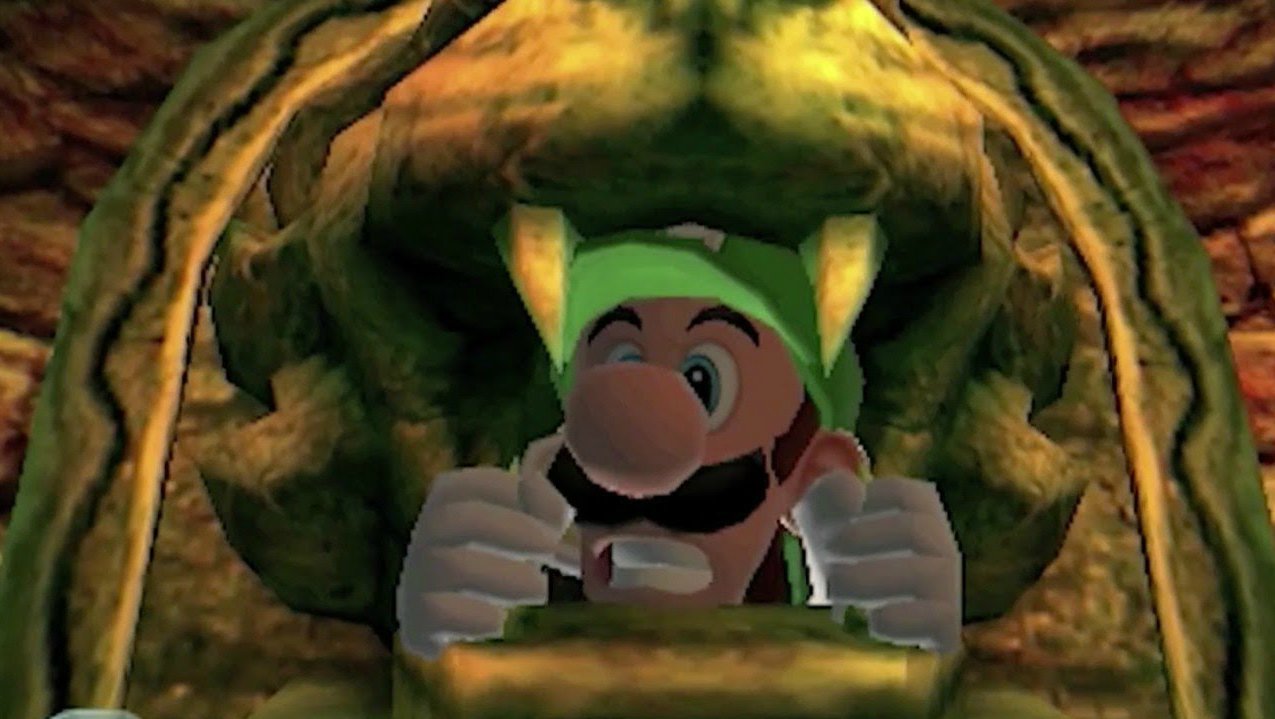 Gather around little girls and boys, for the night approaches and with it comes the pale moon. On the night of the pale moon, we recall a tale of horror and suspense so frightening that the very devil himself thrusts his head beneath the sheets and cries to make it cease! In our ghastly story a dusty mansion upon a darkened hillside has been bequeathed to a green clad plumber from the Hoboken of the Mushroom Kingdom, and even though this particular mansion is dirty and maybe just appeared overnight, it’s a free mansion, am I right?

Luigi’s Mansion is Luigi’s time to shine. Unlike his more successful brother, Luigi has never had a very fancy residence and this chance is one in a million. When he arrives, he soon learns why the mansion was a steal: Hundreds of loose spirits roam the rooms and corridors of the house, with some of those being a prominent group of past dwellers of the home, whose portraits once lined the various rooms of the great mansion.

Furthermore, his brother Mario is lost in the estate somewhere, but with the help of a mad scientist, a flashlight, and a vacuum ghost trapper, Luigi has a chance to save his brother and cleanse his mansion all in one go. Can Luigi defeat the spirits and triumph over evil, or will he be driven to madness, left to gnaw at his green hat in silence? Only you have the power to decide.

This would feel a lot more powerful if the controls for this game were not so dodgy. Luigi’s Mansion has a fairly rigid and clunky control scheme straight out of the PlayStation era, where hard-to-use controls mesh with some bad camera angles to make for very frustrating situations. The game also employs motion controls, which do work okay but do not mix at all with the 3D visuals in the game. Moving the screen around to trigger motion controls with the 3D mode active will give you headaches, and the motion controls do not seem to be able to be turned off.

These controls are clunky but definitely fall short of game breaking. Combine that with the fact that Luigi’s Mansion is one of the more creative and outrageous Nintendo games to ever come about and you still have a recipe for a very top notch game. Luigi’s Mansion is a very unique foray in the world of the Mushroom Kingdom indicative of its rabid cult status.

The most obvious is Luigi’s starring role. Usually the star in geography lesson based investigations or non-canonical runs of Super Mario Bros. 2, Luigi’s Mansion shows the titular character at his bravest and most impressive, facing down an entire haunted mansion with a piece of junky equipment an impish doctor strangelove-esque character gave to him.

The ghost battles are exciting and fun and the process has a lighthearted feel common with games in the Mario universe. The dynamic of pulling back to trap them is as cool a way I can imagine trapping ghosts. It gives the process a feeling of reeling in a fish and the mechanic is very rewarding. Beyond just the battles, the way the game uses the environment, from a swinging chandelier to a drafty window covered by a curtain, brings the whole world to life. Smarts and a bit of problem solving skills are needed to clear many of the rooms, which are rife with hazards and ghosts to capture.

The fact of the motion controls messing with the eyes while using 3D mode is rather unfortunate, as the 3D graphics in this remake are fantastic. Everything pops and the game uses a fading effect on layered graphics that adds a bit to the ghostly aesthetic. Again, the controls do not make 3D mode unusable entirely, but you will be forced to at the very least compensate for the motion controls while using the secondary aiming on the D-pad. All that said, the game looks great in 2D as well. There is a vast upgrade in design and fidelity in this remake over the original.

Luigi’s Mansion can be played single player as always, but the game also provides co-op play via the 3DS Local Play function. Both players will need a copy to be able to play the full game, but you can share boss battles with friends who don’t have the game. Player 2 will play as a green slime version of Luigi named Gooigi that is hindered in health but can fight to the full extent. This mode makes the game considerably easier and much more fun, having that second player around to help and enjoy the game with you. This version also has amiibo support, wherein you can get helpful tips and secrets if you are so inclined.

Luigi’s Mansion was great when it first arrived, and this remake is even more polished and complete than the first. There are a lot of problems with the controls in the game, but the creative and diverse gameplay combined with a beautiful bevy of graphics make the experience worth the frustration.

Patrick Rost has been with Gaming Trend since 2013. At first focused on sports coverage, Patrick has gone on to cover a wide range of games and other products for the website. Outside of Gaming Trend, Patrick writes and records music, grinds perpetually in Elder Scrolls Online (PS4), and lives day to day with his two dogs, Bob and Stella.
Related Articles: Luigi's Mansion
Share
Tweet
Share
Submit