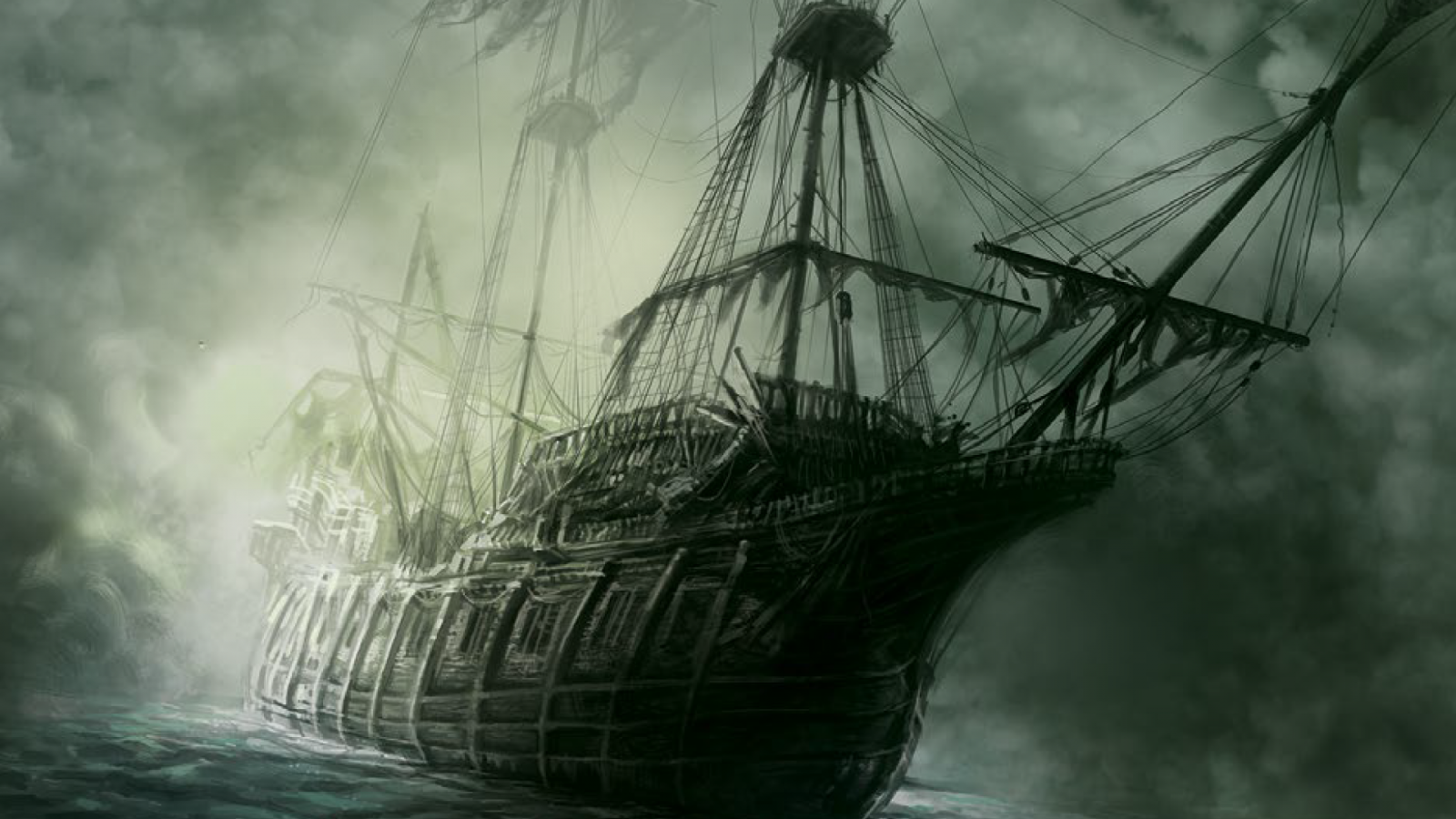 Fresh off of Lankhmar, City of Thieves, Pinnacle Entertainment group is taking us out on the water to the Savage Seas of Nehwon. Nehwon is one of those settings whose influence is baked directly into modern art and literature, whether you know it or not. Fritz Lieber’s tales of Fafhrd and the Grey Mouser helped set the standard for low fantasy sword and sorcery tales, and their exploits helped inform early Dungeons and Dragons, Discworld, and more. Lankhmar, the city at the heart of many of their adventures, has been adapted for the tabletop by early AD&D, Dungeon Crawl Classics, and recently Savage worlds. Pinnacle released its take on this classic pulp setting in 2015, adapting the races, themes, magic, world, antagonists and more, delivering impressive quality in a 98 page package. The Savage Seas of Nehwon expands the adventurous possibilities to the seas and oceans where Fafhrd and the Grey Mouser spent some of their time and beyond into the unknown. On Kickstarter beginning May 1st, I got the chance to get an early look at the book before release.

Pinnacle Entertainment Group’s products are simultaneously easy and difficult to review. Pinnacle’s releases have something of a formula to them, but that formula is effective and makes for easy to use and inexpensive games. To my knowledge, the group doesn’t understand how to create a bad game, though its members have probably heard about the general concept at some point (and politely scoffed, believing it could only possibly be a joke.) The Savage Seas follows this formula, delivering quality and excitement, though lacking an abundance of ingenuity. This 98-page book contains everything you need to venture out from Lankhmar onto the seas and, while it never strives to innovate, the game does deliver on its promise with PEG’s typical flair.

The Savage Seas of Nehwon opens with a discussion of the various waterways, providing details about the environment, trade, and the characters who typically travel the waters. There are also suggestions of adventures you may have on the waters, but these are limited to descriptions of rumors or small asides. The real meat of adventuring is saved for a later portion of the book. It’s part of this early section that you will find either entrancing or tedious, depending on your interest in naval terminology. Many of these sections contain granular discussions of the types of waves and surf you will find in each sea, informing how you choose to navigate them. Given that this is a book specifically about sea travel, I cannot see this as a weakness. If anything, it helps by adding extra details to an important aspect of the setting around which the book is specifically designed.

We also get a discussion of Lankhmar’s association with the water, and ways that you can integrate it into your games. There are discussions of fishing, smuggling, piracy, and the common folk’s use of the sea. These are usable but general. Especially given the importance of the water to the city of Lankhmar, I would have liked some more in depth discussion, however much the book is intended to make for world-spanning adventures.

What this book does not possess, and reasonable minds could differ as to its necessity, was a map. The core Lankhmar book does have a map containing all of the locations mentioned in this write-up, but none are to be found here. I don’t know that anything more specialized is needed, but be prepared to flip back to the main book if you intend to travel the seas.

More glaring is the sparse amount of art to be found in this book. The layout is admirable and pages sell the theme of a tattered pirate’s map of the oceans, but it lacks Pinnacle’s typical artistic additions to make the book truly its own. The more it describes areas or antagonists, the more I found that my imagination was working on its own, and it is a shame that so much of these 98 pages are made up of unbroken text. Some of what is there is of less than stirring quality as well, despite a few standout pieces.

New character options are fairly limited, but for something as specialized as sea travel you may not want an abundance of options. Characters can now become Seasick as a minor or major hindrance, gain proficiency in swimming, or use edges to make themselves into a stalwart commander. Becalm and Mend are the only new powers, despite some mystical edges to help you traul the waters. The game was already complete when it got to this expansion, so an overabundance of new options was never really necessary. I believe these edges and hindrances are enough to serve my group, but a quick warning–if you are preparing a game that is primarily focussed on sea travel, you may need to harvest some other resources.

As for that travel, you have 10 premade ships to choose from, starting at lowly rowboats and increasing in size and capability to the fearsome galley. They follow the Savage Worlds vehicle rules, so if you find yourself in need of others, you can look straight to 50 fathoms for more material. Ships’ statistics are made up of a few simple qualities that make for simple and user friendly gameplay: acceleration, top speed, handling, toughness, crew complement, and cost.

Concise, effective, and easy to use. That summarizes everything PEG has been doing for the past ten years or so, and these ship stats are no exception

Once you have your ship, you are ready to dive into the new rules specialized for working in and around ships. These mostly relate to ship combat, which vary from ships firing at one another to below deck brawls to ranges of archers with flaming arrows. Predictably for any Savage Worlds expansion, these rules are easy to learn and use in game, making it essentially effortless to shift gears from one method of play to another. I was especially pleased at how these rules made me reconsider how I would create naval encounters. There are distinct disadvantages to, for instance, fighting below decks, which an intelligent crew can prepare for. During combat, you will also have diverse ways for characters to become engaged while remaining useful to the fight. One character can give out orders to the crew while another fixes holes blown into your ship and a third fires wildly at the archers arrayed on a hostile vessel.

Ships also have options for would-be captains to consider. In these new rules, you can find everything you need to control the ship, as well as rules for sinking, special maneuvers, drifting, and storms. There was care put into the time you spend outside of combat, where you will need to consider the way you travel the waters throughout your journey. Many of these rules are consistent with (or in some cases, lifted from) 50 Fathoms, but written more coherently for ease of use. Penalties, for instance, are listed in bold at the top of each maneuver, so you no longer have to read through it multiple times to know how it functions in game.

All of the rules text takes up a scant third of the book, and the rest consists of the adventure generator, example adventures, and new antagonists for your adventurers to fight. For those of you familiar with Pinnacle releases, the adventure generator should be nothing new. It’s a great way to create something quickly, helping you to build up a simple story from scratch. Using a few dice rolls and card draws, you can determine the adventure’s relevant motivations, objects, location, opposition, weather, and supernatural elements involved. This is a part of the tried and true formula I mentioned before. It’s effective, and helps you get a very quick overview of what the setting has to offer.

For a more in depth look at what Nehwon’s waterways have to offer, you can venture into the prewritten adventures. There are eight available, and they cover many bases, giving you some well-considered advice on ways you can modify or include them in your game. Each is fairly short, clearly intended for a one shot or side story, but they range in type and tone to the point where you would be hard-pressed not to find a few that connect with you. I know I will make an excuse to feature one involving a mysterious ghost ship and a spate of murders…even if we are currently playing Deadlands. I can make it work. These adventures are short, but contain satisfying twists and turns, and offer a surprising amount of quality and depth in succinct packages.

The only area I found distinctly in need of some help was the antagonist section. Rounding out the book is a collection of twelve aquatic foes. While these are enough to serve for some quick fodder if you find yourself in need of a sudden sea combat, you will need to use or create some other resources if you spend a long time on the water. The book included some basic large animal enemies, but the best antagonist by far is an octopus with sabers in each tentacle, the exact mixture of gonzo and terrifying on which pulp stakes its claim.

I left my reading of this book wanting to use it to its full potential. There are dreaded and hilarious possibilities waiting in the open waters, and I know that if players ever venture out to meet them they will be well provided for. While it would have been nice to see more of this book dedicated to how sea travel is different for individuals within the setting, I have no doubt that it will serve you admirably if you have need.

The Savage Seas of Nehwon gives you everything you need for adventures on the oceans of Lankhmar. Its support for naval encounters are admirable, if somewhat sparse, but this material is designed to be integrated into a complete product. With haunted sea travellers, treacherous waterways, and fetid beasts from beyond the ken of surface-dwellers, you can be sure to follow in the soggy footsteps of Fafhrd and the Grey Mouser with ease if you read through the Savage Seas of Lankhmar.

John Farrell is a legal aid attorney specializing in domestic violence, living in West Chester Pennsylvania. You can listen to him travel the weird west as Carrie A. Nation in the Joker's Wild podcast at: https://jokerswildpodcast.weebly.com/
Related Articles: Lankhmar: Savage Seas of Nehwon, Tabletop
Share
Tweet
Share
Submit