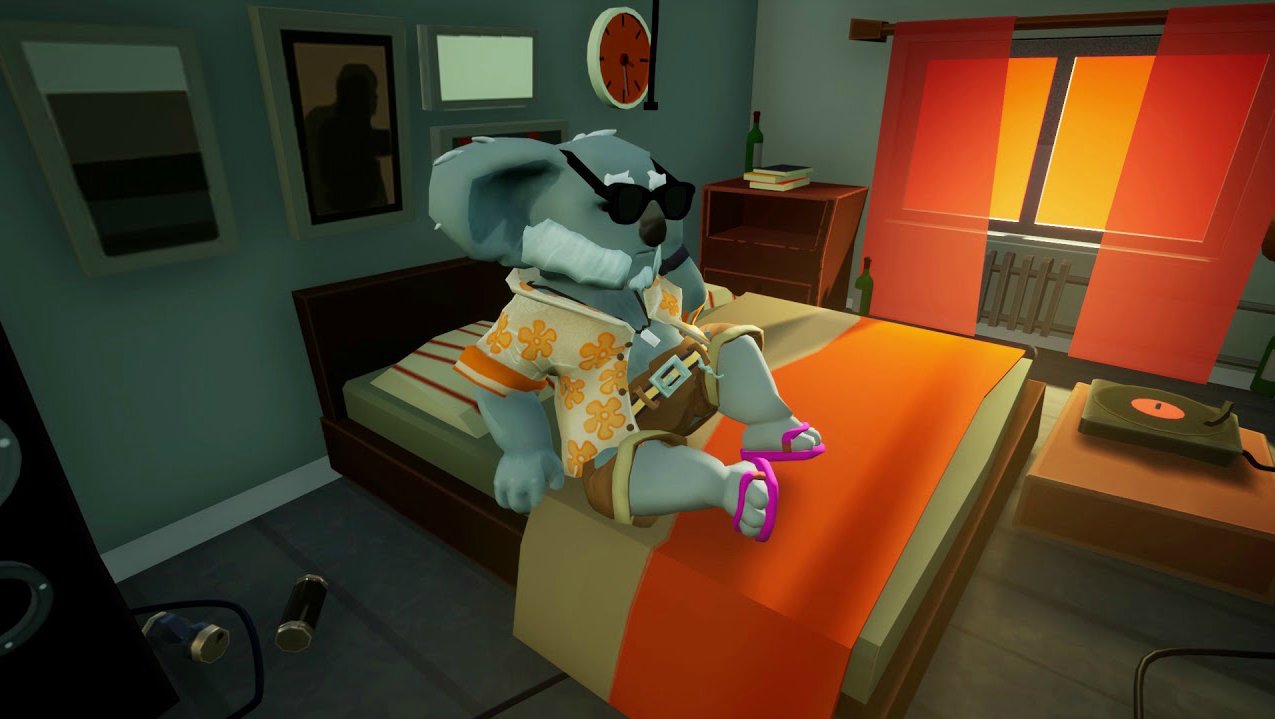 A lot of supposed “story” games come off as lazy and uninspired to me, largely because a bulk of them in my experience are text heavy and come off as glorified books. I’ve got no issue with a story focused gaming experience as long as it takes advantage of the live action possible with the medium. Stone, a self-described “Hip-Hop Stoner Noir”, is exactly the kind of story driven gaming experience that I want to have, and want everyone else to have as well.

Stone is a well crafted story that suffers from some boggy dialogue and timing issues, but overall keeps the player interested and involved. A love story and a crime story all at once, there are several twists and turns throughout that managed to surprise me. There are no action or gaming sequences to be had here, which was no problem due to the intriguing nature of the story content.

Stone, a koala slob who masquerades as a private detective, wakes to find his love is missing. He receives a call telling him he’ll never see Alex, his one and only, ever again. The flat in which they live together has been ransacked and Stone’s treasured gift to Alex lies on the floor near his door. Stone goes out and begins gathering information from the various nightclub owners and lazy roustabouts that make up their social circle. The question is: Will Stone break open this most personal and important case, or will he fail and never see Alex again?

Stone is a very typical male lead. He drinks to excess, he’s hated by everyone and admits freely to being an asshole, but still manages to keep friends and have people help him along the way. He looks disheveled and sounds about as gruff as a pack of Lucky Strikes in a razor blade hurricane. The layers of his character onion begin to reveal themselves as you play through, and the three dimensionalization of his character is a nice thing to behold.

The game is split into five acts, with several scenes making up each act. Typically these begin with Stone in a bar or club or some other place with another main character to speak with. Cockie, a bird, is the owner of a pub where Stone used to frequent, but she has since banned him for his bad and destructive behavior. Smiley, a toothy crocodile, is the busy owner of the local dance club, and met Stone through a existing friendship with Alex. Leslie, a stoner groundhog, sympathizes and helps Stone however he can while freeloading in front of the bowling alley. Lastly, the local police investigator and Stone’s former rival, Devil, seeks to use Stone’s situation to further her investigations.

Some scenes are more esoteric, taking place in dreamscapes or flashback moments that reveal information as the story progresses. The story is a large collection of mysteries that unravel themselves along each step. I felt like the clues being dropped for the player were a bit too obvious at times, and wished the overall tension of the moment was a bit more strained. Despite this, the game did manage to trick me or divert me just enough to shock me with revelations along the way.

The story is strong but along the way there are tons of little issues that should be cleaned up before release. Clipping is frequent, with Stone’s furry back bursting through his shirt at different angles. Often times the cues for dialogue would trigger in the middle of a response, throwing off the timing and muddling lines. Stone moves at a snail’s pace, and it takes forever to get around. The default mouse sensitivity with the camera can also easily make players sick.

The music is beautifully chosen to fit the tone of the game throughout, with several indie artists providing multiple tracks, making a coherent soundtrack from a mixture of techno, hip-hop, and doom metal. The game also provides a series of weird side features, such as a drum machine (operational but boring and poorly responsive), a cinema showing 6 silent film features (Cabinet of Dr. Caligari!), and the ability to go and dance at the club (though it is just an animated sway.)

The game looks decent, but isn’t very special. A lot of the background scenery is fairly ugly to look at. The game has a weird mix of dark tones shifting to scenes of bright colors, and each scene is abruptly changed via a bright pink wall of color with white text. It’s harsh on the eyes.

Perhaps though the big drawback is length. I played through this game in a single afternoon and have no reason to go back except maybe to watch Dr. Caligari again. I am torn because I do appreciate the way the game is paced but overall would like to see more chapters. This story is fairly set in stone, pun incredibly intended, so even going back and playing slightly differently is going to lead you to the same exit.

Stone is fun, but flawed. The story is well crafted and reveals itself through a series of twists that keep you engaged throughout. There is no action aside from walking up to different people or items, but the game never drags. As much as I love the story here, the dialogue is strained at times and has glitches that affect the timing. Overall a worthy experience and story to enjoy.

Patrick Rost has been with Gaming Trend since 2013. At first focused on sports coverage, Patrick has gone on to cover a wide range of games and other products for the website. Outside of Gaming Trend, Patrick writes and records music, grinds perpetually in Elder Scrolls Online (PS4), and lives day to day with his two dogs, Bob and Stella.
Related Articles: Stone
Share
Tweet
Share
Submit