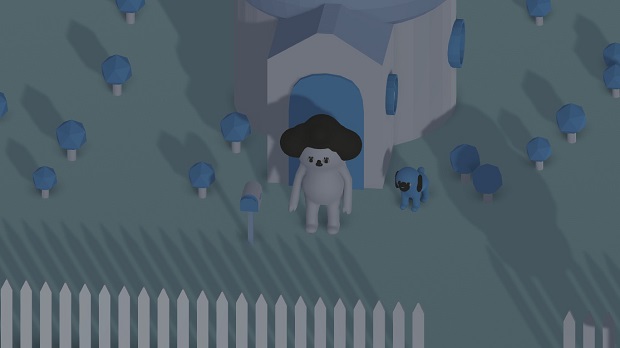 Have you ever wanted to know what the weather’s like without stepping outside or even turning on the TV? Just load up Lovely Weather We’re Having and it will give you a glimpse of what to expect.

This clever little game from indie developer Julian Glander is able to tap into your local weather data and based on that information it changes the landscape accordingly. It takes into account factors such as temperature, time of day, and precipitation. These affect the brightness and shade of colors, as well as the conversations NPCs want to have with you.

Glander has described the game as a goal-free explorer. His quirky art style builds the world, and it’s interesting to see how he’s designed the houses and characters. You can interact with the environment to a certain extent, like kicking rocks or knocking over bicycles, but mostly it’s just you wandering around with your dog and saying hello to those you meet.

Because it relies on the weather to influence colors and conversations, this game is meant to be played in short bursts at various times of day and temperatures. You won’t find yourself enveloped in hour-long sessions, but it’s fun to open it up shortly after you wake up, then check it again before bed and see what’s different.

This was taken at 9 AM. As you can see, the colors are all a bit lighter – but it’s still pretty cold out.

Though I love the concept of this game, there are some areas that leave room for improvement. For instance, it’s an open-world but the world currently isn’t very big. I easily found the edges of the map in a matter of minutes. There are appropriate sound effects matched with walking into a grassy field or dipping into the water, but they have harsh and obvious transitions.

As mentioned, the map is populated with a few NPCs. When you encounter them, they may remark upon the weather conditions or the lateness of the hour. However, some of them have stock lines they deliver over and over with no variation. A greater amount of available dialogue would be nice to see.

Here’s just one of the silly sayings you’ll hear – but the same lines of dialogue over and over can get stale.

So far it’s been hard to gauge just how nuanced the weather data is and how the environment reacts to it. Because I’m in Missouri, dealing with chilly November days, there probably won’t be major changes to the game’s color scheme. I will say, it has been noticeably different playing in the morning versus the nighttime, and the hues seem a little brighter during the slightly warmer hours.

To anyone reading right now, Lovely Weather We’re Having may seem pretty bare bones. While that is true, I believe that’s what the developer was going for. This game isn’t meant to have a complex story or an adventure-filled quest to follow, so I don’t want to judge it for things it isn’t trying to be. Glander meant for it to be calming like his previous title Cloudytown, a peaceful drifting game for iOS. Both of his games so far are simple and relaxing, but lack depth or intrigue.

I’m not looking for some epic narrative to be added, because that wouldn’t fit Glander’s goals. However, it wouldn’t hurt to smooth some things out, such as the sound design, and add content in the form of map areas and dialogue.

Lovely Weather We’re Having has a solid foundation of eye-catching artwork and an ever-changing landscape based on your local weather. However, there are a few negatives that can’t be overlooked, such as the rough audio, the lack of dialogue, and the small size of the world. Though I have to give it a low score based on what it is now, I do see potential in this game, and I’m hoping that there will be some updates after its release.

Sarah Marchant is an office admin for a nerdy t-shirt company. She has a soft spot for indie games, a passion for story-driven titles, and a weakness for cooking games and anything with zombies.
Related Articles: Lovely Weather We're Having
Share
Tweet
Share
Submit