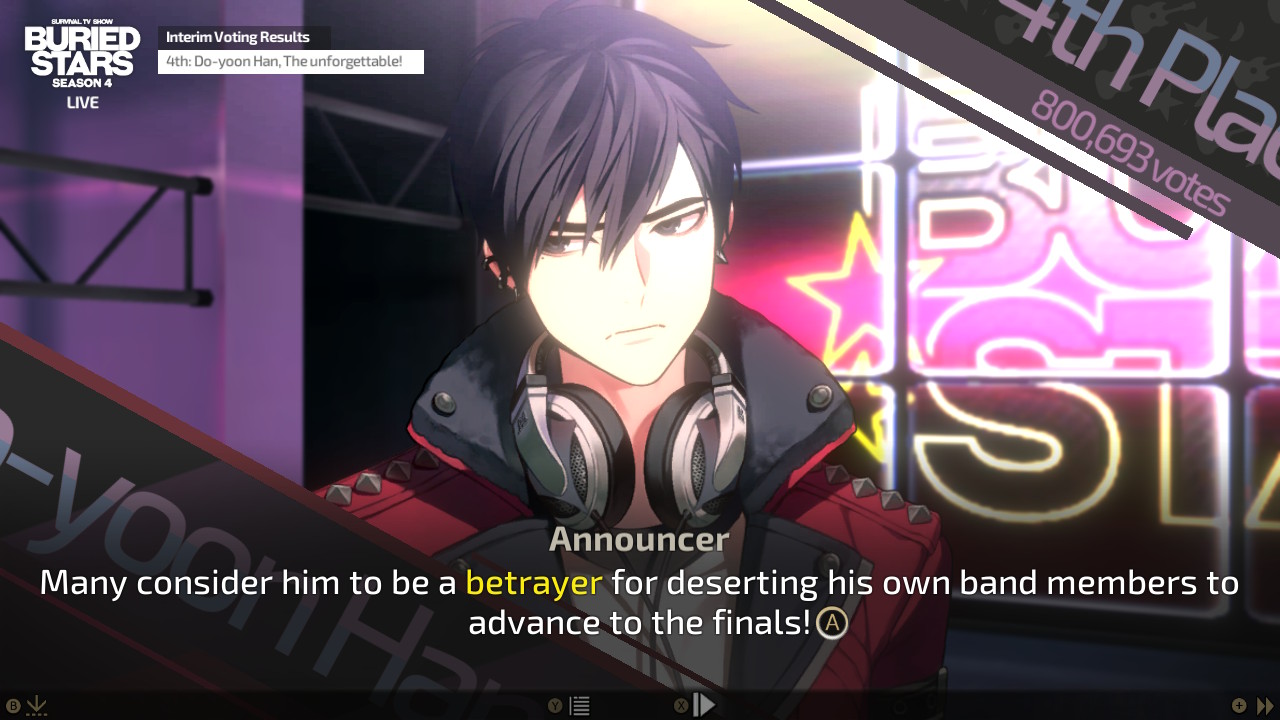 My favorite episodes of the techno-thriller anthology series Black Mirror revolve around the degradation of human interaction based on social media, as seen in the season 3 episodes Nosedive and Hated in the Nation. As social media becomes increasingly integrated in our daily lives, there are some nasty things that can result from this. Buried Stars is a weird mix of Black Mirror, Danganronpa, and Ace Attorney set in a Kpop world, and while that sounds like a weird blend of media comparisons, it holds some of the best story beats this year.

Buried Stars begins as the titular reality talent show is ready to choose three finalists from a cast of five: rebel Hyesung Seo, Do-Yoon Han (the player character, nicknamed “Betrayer”), Inha Oh, Juyoung Min, and Gyu-hyuk Lee. The two with the fewest amount of votes will be eliminated from the competition, but unfortunately for the cast, a freak accident destroys the building, trapping the main five (plus two staff) into the building. It’s a race against time as the cast tries to survive the crumbling building with their lives intact…

…Unfortunately, one of the staff members bites the dust early in the story, and to make matters worse, the producers have decided to continue with the live voting. If that isn’t enough, an impersonator of the now deceased staff member threatens that whoever gets the fewest number of votes now will be eliminated, literally. As fourth place Do-Yoon, you have to investigate who this mysterious impersonator is while making sure your castmates don’t crack under the mental or physical pressure of a deteriorating building. Right off the bat, Buried Stars (also called Bstars within the game, though not to be confused with my favorite manga of last year, Beastars) has a uniquely interesting hook to the countless “death games” and whodunits of visual novels past. This time, however, social media comes into the mix in the most dangerous of ways. 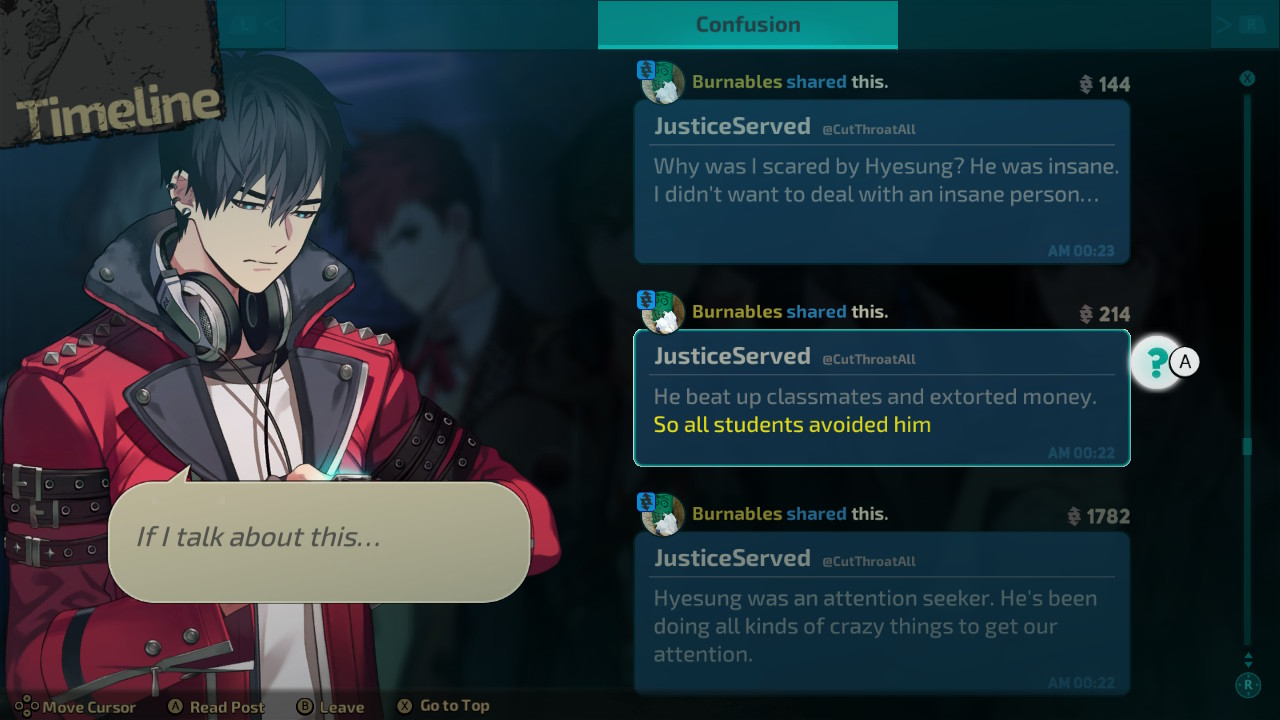 As Buried Stars is a visual novel, you’ll utilize the Communication feature during sections of the game. By investigating for clues in the background or scrolling through Phater (an amalgamation of Twitter and Facebook), you’ll be able to pick up keywords that you can share with the people in the room. By presenting these keywords, you’ll be able to get more information of the situation at hand, the opinions of the characters, and even more keywords.

However, there are a couple of gauges you have to keep in mind: The Rapport gauge (which denotes how close you are to a character), and the Sanity gauge (which will increase or decrease based on actions you take during the story). If you manage to piss off your castmates, some paths and endings will be locked; get the latter down to zero, and you will die a painful death. It’s a unique mechanic that tests your attention to detail. You see, different keywords will provoke different responses to your castmates; some will increase or decrease your relationship with them. 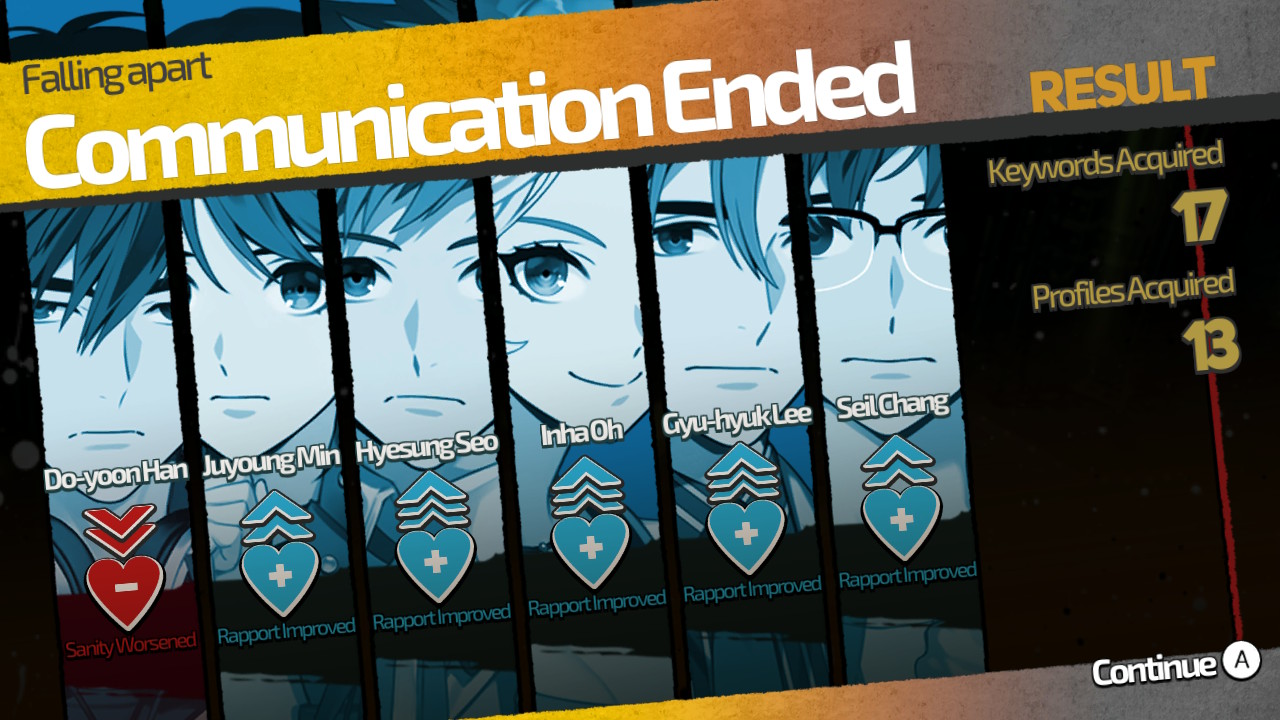 You’ll need to know how to respond to different characters based on the situations, and sometimes the calm or rational answer isn’t the correct one. Trying to butter up junior staff member Seil Chang with encouraging words? Nah, he’s much more receptive to responses that are down-to-earth and reasonable rather than optimistic. Thinking that Gyu-hyuk Lee cares about his family members so much that he would want to leave Bstars to take care of them? Another penalty for you! It’s a system that I haven’t seen used in this format, and I do like how even innocuous phrases like nicknames or even an audience list can rile up certain characters. The game also punishes you for trying every single keyword on a character, as doing so will cause your sanity to deplete to dangerous levels. You don’t have to exhaust every keyword to advance the story, so do you risk getting a profile (which are vital to unlocking Rapport events and character epilogues) by losing a bunch of Rapport and Sanity?

It helps that the cast is relatable and to an extent, likeable. There wasn’t a single character that I necessarily hated, and every character has hidden pasts and secrets to unveil. You’ll uncover more character building moments by talking to the cast, and because of the nature of the reality show, have built their own connections with each other based on scripted stories. It was wonderful getting to know each and every one of the main cast, and it also hurts when they’re in danger. (Your first playthrough will force you into a bad ending, and you will feel terrible for your actions.) 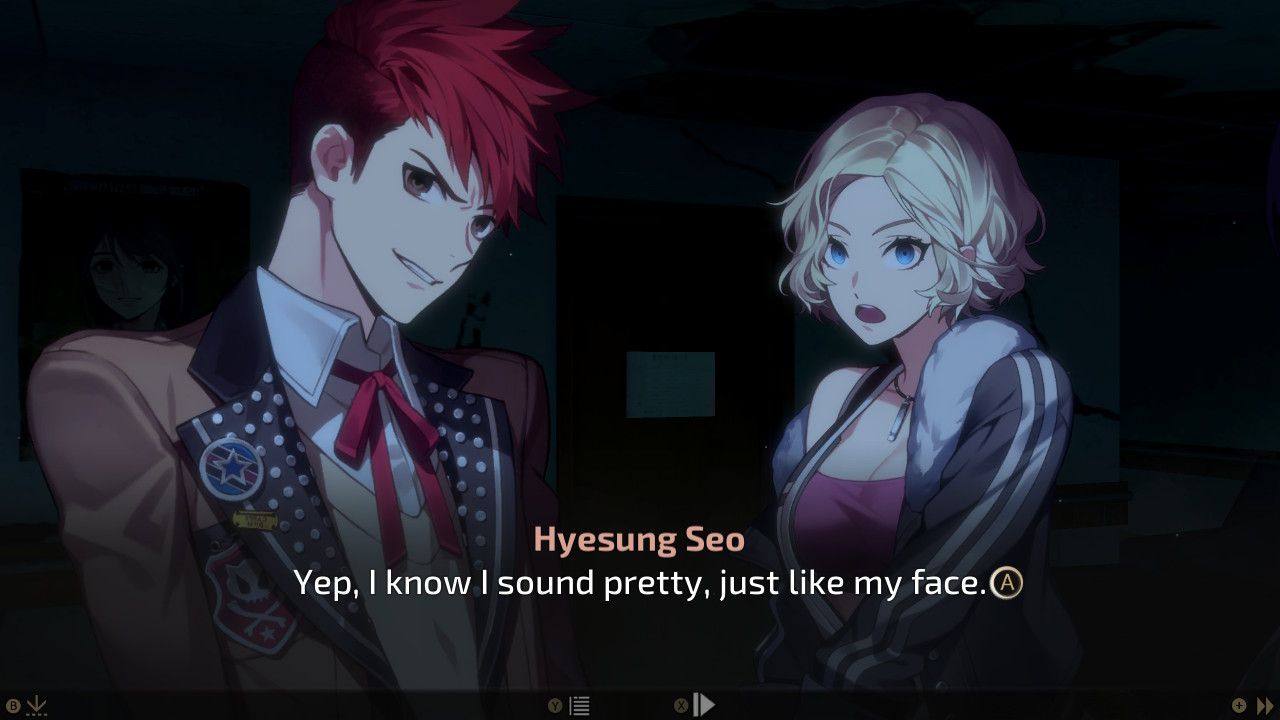 In addition to communicating with your castmates, you can also use your Smart Watch to access messages and call characters while separated, plus some other things regarding customization. The most important aspect of this is checking Phater posts, which will lead you to a list of hundreds of status updates as the public begins to piece together what happened during the accident. This is the best part of the story, as it shows how worldbuilding around the situation develops through social media. From overzealous fanboys to conspiracy theorists, the Phater posts are an eerily parallel analogue to how fanbases can overreact to an important event. Considering the oddly dystopian “The show must go on!” behavior of the B-stars producers, this element fits organically within the narrative quite well.

After these communication segments are finished, you’ll also experience some cutscenes where your decisions can make or break Rapport. Each choice will change your relationships with the cast, and there will be some hard decisions you’ll have to make to keep everyone sane and safe. These mystery segments will also allow you to pick different clues as evidence to figure out the rationale behind certain actions, or inconsistencies between character alibis. It’s reminiscent of the investigation sequences of Ace Attorney, and they do require some lateral thinking (with no hint system for these segments, unfortunately). 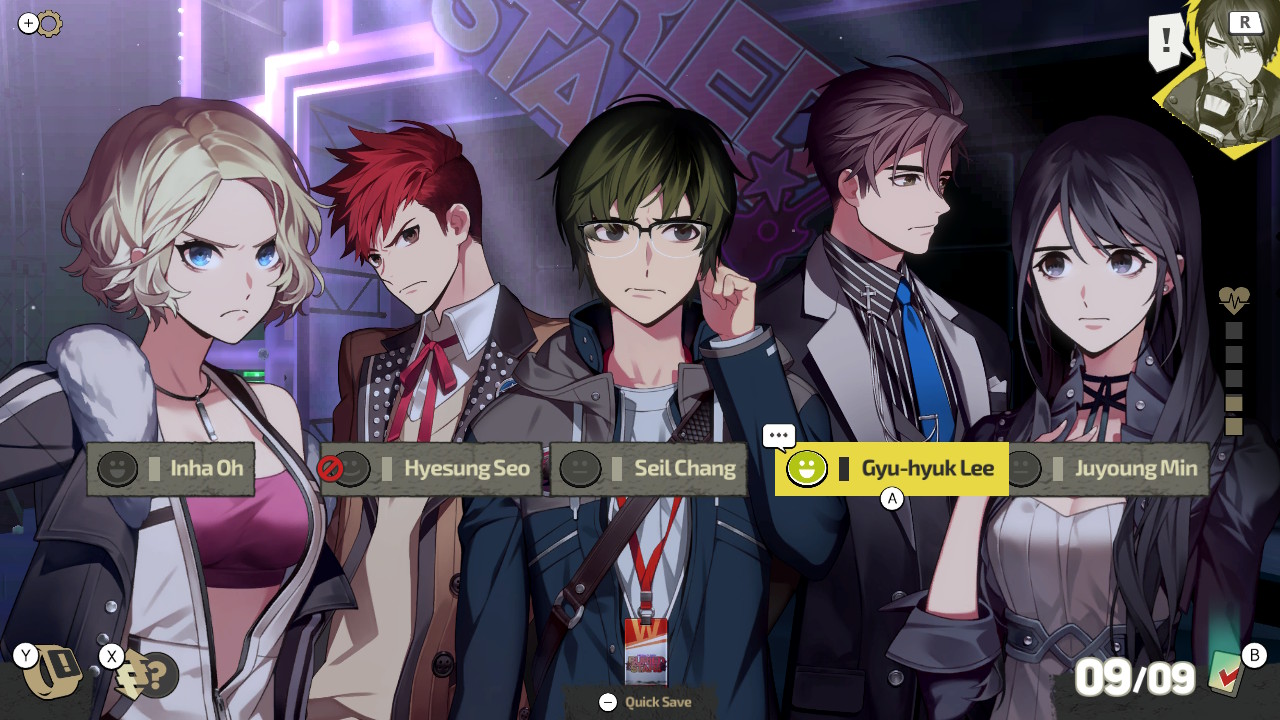 While the Rapport and Sanity systems are the most unique mechanics of Buried Stars, they also come with a small price of trial-and-error gameplay. While you can normally figure out what keywords will elicit a positive or negative response from a character, there are some actions that will force you to lose Rapport or Sanity to gain a keyword or profile. It’s rather easy to lose Sanity and hard to regain it, which makes some sections near the end of a route rather hard. This also means you’ll have to memorize some decisions and keywords in order to trigger route flags and events, and there is little indication of this in future playthroughs (though you do receive a log featuring how a certain character reacted to a keyword on a previous run, which remains the same every time). It’s a small qualm in an otherwise fantastic package. 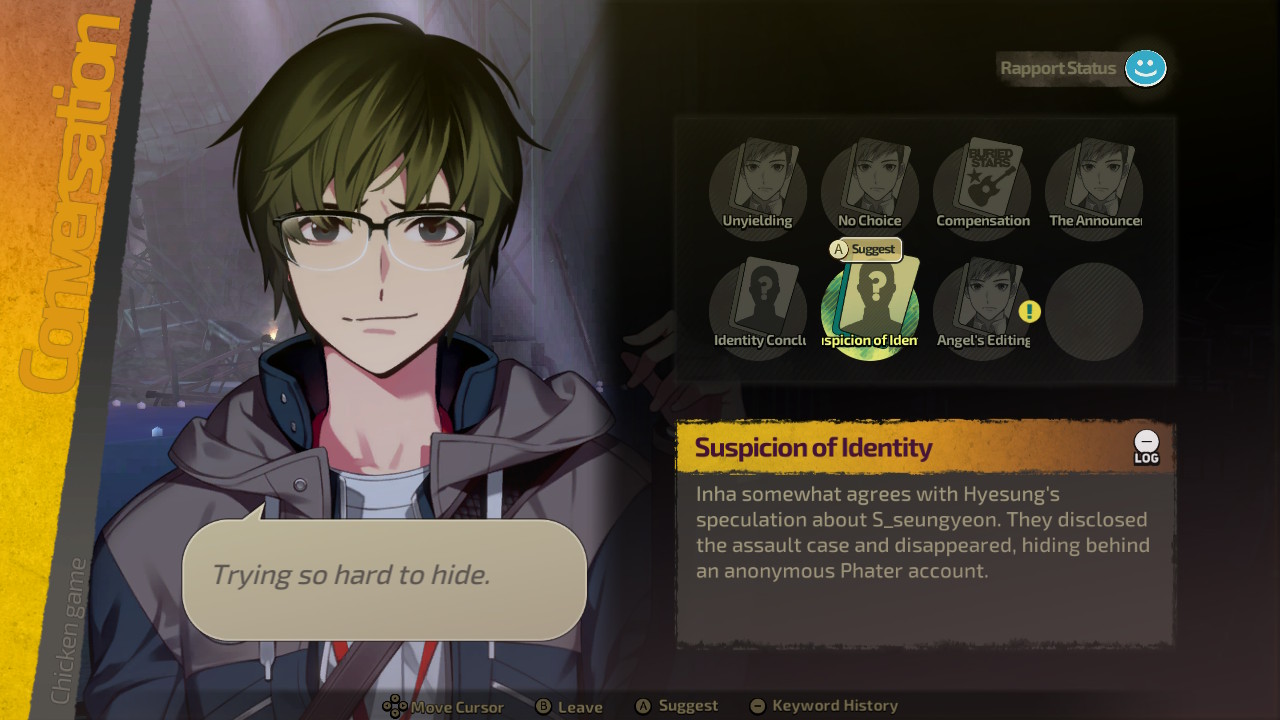 In terms of presentation, Buried Stars is perfect on the Nintendo Switch. While the game is also available on the PlayStation 4, I feel like the lovely sprite work and flow of the visual novel pops on the handheld. I also have to commend the developers for including a Korean voice cast and setting for this game, as it’s a unique atmosphere to explore (while J-pop stardom and the dark underbelly have been usual topics, I haven’t seen the same applied to K-pop). The backgrounds don’t look too remarkable, but the way that the game is presented separates Buried Stars from the competition.

Buried Stars will slip under the radar for most people; I implore you to check this wonderful visual novel out, as it’s perhaps one of the best narrative experiences this year. With a relatable and fleshed out cast of characters mixed with simple yet engrossing mystery mechanics, this one deserves your time and attention.

Elisha Deogracias is an aspiring accountant by day, freelance writer by night. Before writing for Gaming Trend, he had a small gig on the now defunct Examiner. When not being a third wheel with his best friends on dates or yearning for some closure on Pushing Daisies, he's busy catching up on shonen manga and wacky rhythm games. Mains R.O.B. in Smash. Still doesn't know if he's a kid or a squid.
Related Articles: Buried Stars, Indies
Share
Tweet
Share
Submit