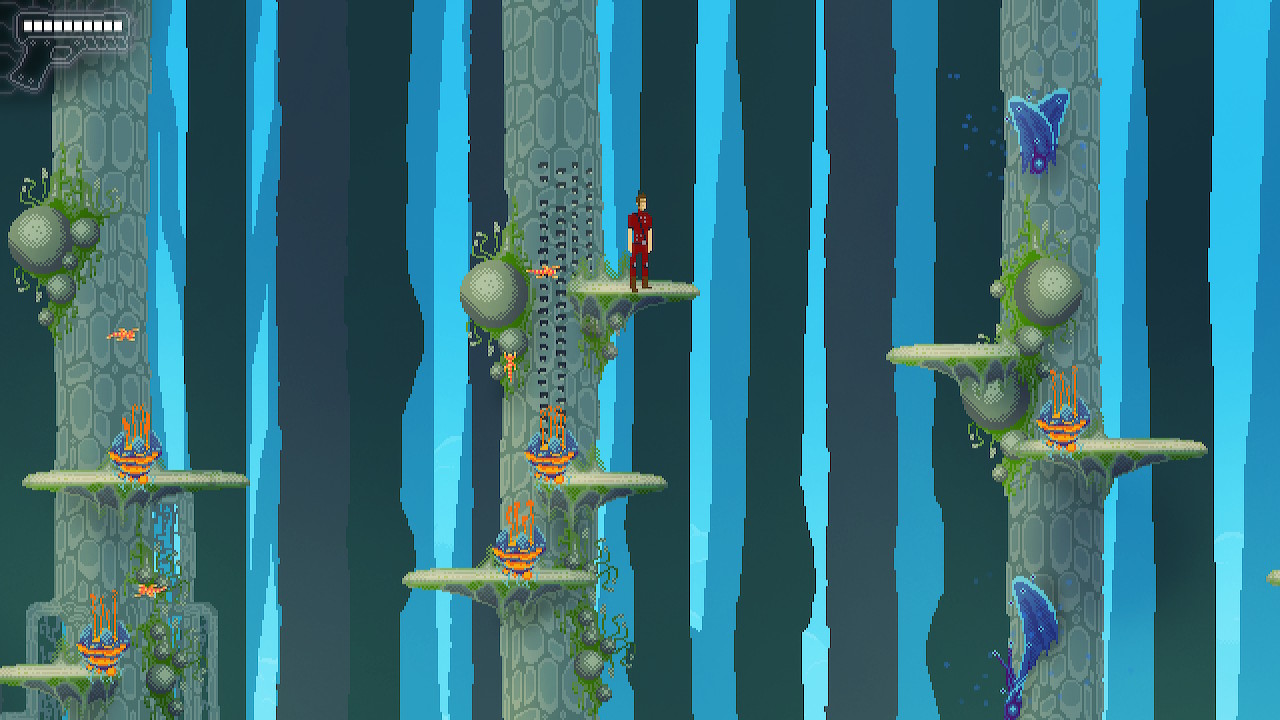 How far would you go to save someone that you loved? Get ready to embark on a journey with a man who asks himself that very question.

The Way comes to the Switch with a remastered version that aims to bring this adventure on the go. The story follows Major Tom as he looks for a way to bring his dead wife back to life. Luckily for him, he’s been researching the existence of the Hidden Temple of Life. According to his research, this temple holds the key to eternal life and he believes this will be able to revive her. Tom has been keeping his wife in a capsule that seems to be preserving her until he can achieve his goal.

In order to get to the temple, the first step is to get off planet. Your first mission is to sneak into the facility you work for and steal a ship. You’ll need to crawl through vents, discharge generators, find passcodes, and avoid security robots that kill you immediately. This area is a good warm-up for what’s to come in this 2D puzzle platformer. Thankfully, you’ll get access to a laser gun, which lets you eliminate all those pesky robots that get in your way. The sound the gun makes when you fire it feels appropriate, and the music captures the sci-fi tone perfectly. It helps keep you immersed in the world they’ve created. After you get everything set up for liftoff, you just drive your van to the ship and load your wife’s capsule in, then off you go.

Upon landing, you find yourself on a bright, colorful planet with plenty of lush greens. Armed with your laser pistol, you’ll explore the landscape and look for an abandoned base. Based on documents that you can find scattered around the world, you learn that Tom wasn’t researching this temple by himself. It turns out that Tom and his wife were a part of a team that were once hard at work attempting to make this grand discovery. Finding these notes is an interesting way to learn about the backstory, especially because they feel like actual notes that could have been left around. The downside is that they sometimes easily blend into the surrounding area, making them harder to spot. At the same time, the game thankfully has the word “document” pop up, along with a button prompt if you’re standing on top of it. The same thing happens for interactable objects, which can help prevent the player from overlooking something important.

Another cool way to discover some backstory is the memory remains. These are ghostly versions of Tom’s wife that can be found waiting around in specific locations. Going to the ghostly figure and pressing A takes you to a short flashback of Tom and his wife. There are 7 of these memories and they serve as extra collectables. They also help emphasize how important Tom’s wife is to him. The fact that he may potentially be seeing visions of her as he continues his journey is a cute yet saddening realization.

On the first planet you explore, you will face many dangers, including being chased by a spider monster and an orange beast. You even lose your gun and obtain an alien artifact that lets you operate ancient technology. This comes into play during a “boss fight” of sorts. This unfortunately, is where I had one of my first issues. During this battle, my game closed due to an error and I had to restart it. Thankfully I only lost a half hour, but since the game relies on autosaves, it was a bit annoying to lose that much time and progress. I sucked it up and played back to that same fight, but it happened again. After a total of 4 attempts ending the same way, I checked for corrupt data and found nothing. Redownloading the game fixed the issue, so it must have somehow downloaded wrong, but nothing strange happened during the initial download. The point is, if this issue is more than an isolated incident, redownload right away and save yourself the time.

After finally getting past this section, you find a baby version of the orange beast. You head to a nearby village and enough time passes for the baby to fully grow up and more research to be complete. Tincan, your beast pet, serves as your way of getting past enemies and some gaps that you once used your gun for. This is an interesting way to handle enemies, but at the same time it can be a pain to wait for Tincan to catch up. If he isn’t close enough to where the prompt appears, he can’t help you.

Completing the research enables you to find some secret temples and obtain upgrades to the alien artifact you found a while back, which is essentially a sphere. Each temple gives you a specific ability right away and you are given 3 challenges to complete that require the use of said ability. The challenges either involve making it past enemies or solving some sort of puzzle. Some puzzles require a little bit of thought, while others take a great deal more. They offer a good challenge, although they can be a little frustrating at times. From that hard work, you’ll earn telekinesis, a reflecting shield, and teleportation. You can only use one power at a time, but they will come in handy.

In a sense, it feels like these areas are preparing you for their use during fights and puzzles that will come later. The desert planet is the next step and my hunch was being tested right away. You need to use the shield to reflect lasers back at enemies, and Tincan is meant to help dispatch some others. I say “meant” because this is about as far as I made it. Not because I wanted to stop, but because of a game breaking bug. Right outside the ship is a small platform with stairs that I walked up. Tincan followed me up, but when I walked away, he didn’t follow me like he usually does. I walked a bit in each direction to see if he was just waiting for me to go farther, but he would only change the direction he was facing, and not leave that spot. I reloaded the last save to see if that fixed things, but it changed nothing. I even closed the game and started it back up, and unfortunately I was stuck in a loop of being unable to progress.

The autosave function is nice in some games, but situations like this prove that it can be a detriment as well. An extra manual save function could have saved me here. My word of advice here is if you play and get to the desert planet, don’t go up the stairs to the left of the ship. You don’t want this to happen to you. If you can avoid the issues that I’ve faced, you should find a fun and challenging puzzle platformer. Maybe you can help Tom fulfill his goal of bringing back his dead wife.

To that note, after bringing up the issues I had with the developers, they stated that they were currently working on a patch that will fix the issues that I had, among other potential problems. Included in the patch will be auto save slots, which will help keep players from having to start all over again. They explained that it will allow players to start from the last stage or the last solved puzzle. This will be a welcome addition to the game, and I hope that it lets players continue to enjoy the wonderfully crafted adventure that lays before them.

The Way Remastered is a fun and challenging puzzle platformer. The world is wonderfully crafted and is a sight to behold. The game closing errors and game breaking bug are annoying and ruin the fun. Relying only on autosave can cause problems, as I learned the hard way. Hopefully the planned patch can fix these issues.

Codi loves to play video games and watch movies. He will watch almost any kind of movie just to experience them. His ideas take inspiration from the shows and movies he watches, and games he plays. He also loves a good pun.
Related Articles: The Way Remastered
Share
Tweet
Share
Submit