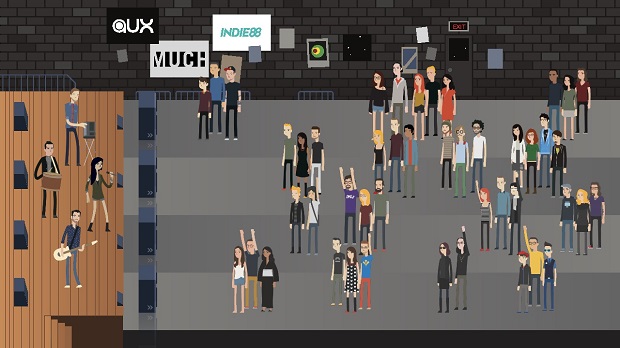 LOUD on Planet X is a fun and quirky addition to the rhythm game genre. It features music from all across the indie spectrum, everything from pop by Lights and CHVRCHES to alternative rock by July Talk and hip hop by Shad. While not without its drawbacks, it has a personality all its own that will gradually pull you in.

The premise of the game, as explained through the opening tutorial, is that several indie artists were in the middle of performing when suddenly they got abducted by aliens. Now the only way they can fight back against the oncoming monsters is through the power of loud music. To do this, you have to click on the speakers along the stage in time with the beat to shoot lasers at the aliens. This unforgiving mechanic requires precision, otherwise the laser won’t fire.

Fortunately for you, you’ve got a few special effects in your arsenal that will help in a pinch. For example, you can set up a fog machine to slow the aliens down or call upon a bouncer to push them back from the stage. These effects are randomized and recharge over time. If you build up enough points in your LOUD meter at the top of the screen, you can hit the aliens with a blast of sound that will stun and kill every enemy that’s out in the open. This turns out to be very useful during the chorus of a song or in other areas where the tempo speeds up.

Sometimes the onslaught becomes too much and your speakers begin to fall apart. There are four lanes with one speaker in each lane, and speakers can take three hits before they need to be repaired. To fix a broken speaker, you must click and hold the wrench symbol until it fills completely, which steals precious seconds away from fighting the monsters. You have to monitor the lanes and divide your time wisely to protect the band onstage.

The number of eyes an alien has displays how many laser hits it takes to defeat, and the total amount of eyes you hit determines your score. One way to rack up the points is to stay perfectly on the beat; avoiding missed shots will activate a 2x multiplier. Then a combination of your score and the level of speaker damage you incur determines how many stars you receive. For instance, you earn three stars if you clear a song with a high score or no speaker damage, and you’re given two stars if you clear a song with an average score or some speaker damage.

LOUD on Planet X contains 28 tracks from 14 different artists which are separated into groups by colors and tiers. You have to play most of the first-tier songs of each color to unlock the second-tier songs, and you have to finish most of the second-tier songs to be able to face the boss. The boss is a mixture of music from multiple artists in the game where you alternate between shooting smaller aliens and pushing back the persistent tentacles of a larger space monster.

This game has three modes to choose from: Easy, Normal, and Hard. However, as someone who considers herself skilled at rhythm games, even the Easy mode of LOUD on Planet X can be quite challenging to figure out at first. For one thing, there tends to be a lot going on across the screen. The border flashes to clue you in on the beat, but it’s hard to peripherally pay attention to the flashing while figuring out what order to tackle the lanes in. Many aliens beam in before scuttling toward the speakers, and those converging white lights can also be distracting.

Not only that, but this rhythm game is inconsistent when it comes to the derivation of its beats. Sometimes they seem to line up with the backing drums from the song, while others they’re based solely on the time signature. A couple of the slow jams in particular threw me off because the beat the game chose felt much too fast. Even with a song I’d listened to hundreds of times (“Closer” by Tegan and Sara if you want to know) it was difficult to get into a state of flow. It often felt like I was struggling against the game instead of working with it. I can’t quite put my finger on it, but it’s not as nuanced as I would have hoped.

Regardless of these complaints, you can tell a lot of thought went into this game. The highly detailed artwork depicts every single band member, not just the lead vocalists, and each band has its own unique LOUD animation that fits its musical style. There are several different types of enemies, with abilities such as traveling underground or splitting off into multiple lanes. It has just enough variety to feel refreshing instead of totally chaotic. Having a handful of difficulty settings is intimidating, but it also provides some replayability. Even the Steam achievements have clever, punny titles.

There is a notable strike against LOUD on Planet X that cannot be overlooked: the way it wants you to follow the rhythm is challenging to grasp. As you dig deeper into the music and revisit songs, you’ll slowly become accustomed to the game and know how to deliver what it asks for. However, this doesn’t change the fact that in the beginning it’s fairly inaccessible.

LOUD on Planet X truly is the indie kid’s rhythm game. While the way it decides the beat of each song can be frustrating at the start, the incredible music catalog aims to keep you coming back.

Sarah Marchant is an office admin for a nerdy t-shirt company. She has a soft spot for indie games, a passion for story-driven titles, and a weakness for cooking games and anything with zombies.
Related Articles: LOUD on Planet X
Share
Tweet
Share
Submit