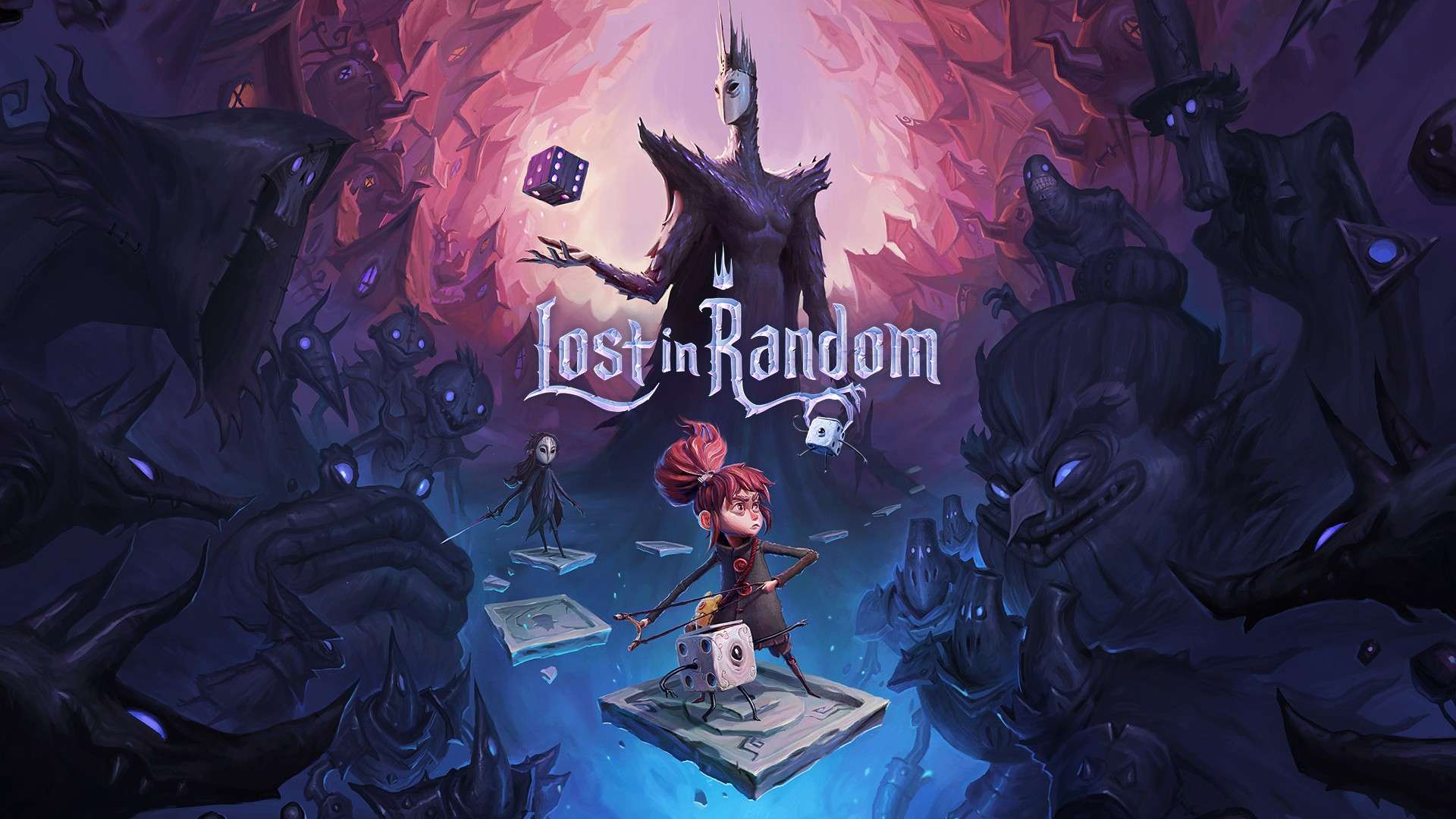 Lost in Random takes place in the titular Random, a world where every decision is decided by the roll of the dice. That is, until the sinister Queen banned all but one dice in Random, which she uses to rule over the kingdom. In Random, the fates of children who’ve reached the age of 12 are decided by a roll of the queen’s dice. Depending on the outcome, the child will be shipped off to live in one of Random’s six realms, each zanier than the last.

The story begins when our protagonist Even and her sister Odd who are residents of Onecraft, the lowest realm in Random. On her twelfth birthday, Odd is kidnapped by the Queen and forced to roll her dice. After rolling a six, she’s then forced to live with the Queen in her palace along with the other elite Sixers. The game then resumes a year later when Even encounters a mysterious ghost, and decides to follow it. She then meets a mysterious sentient dice she later names Dicey along the way. With his help, she begins her adventure on the quest to rescue her sister by progressing through each realm in Random solving problems and kicking butt along the way. 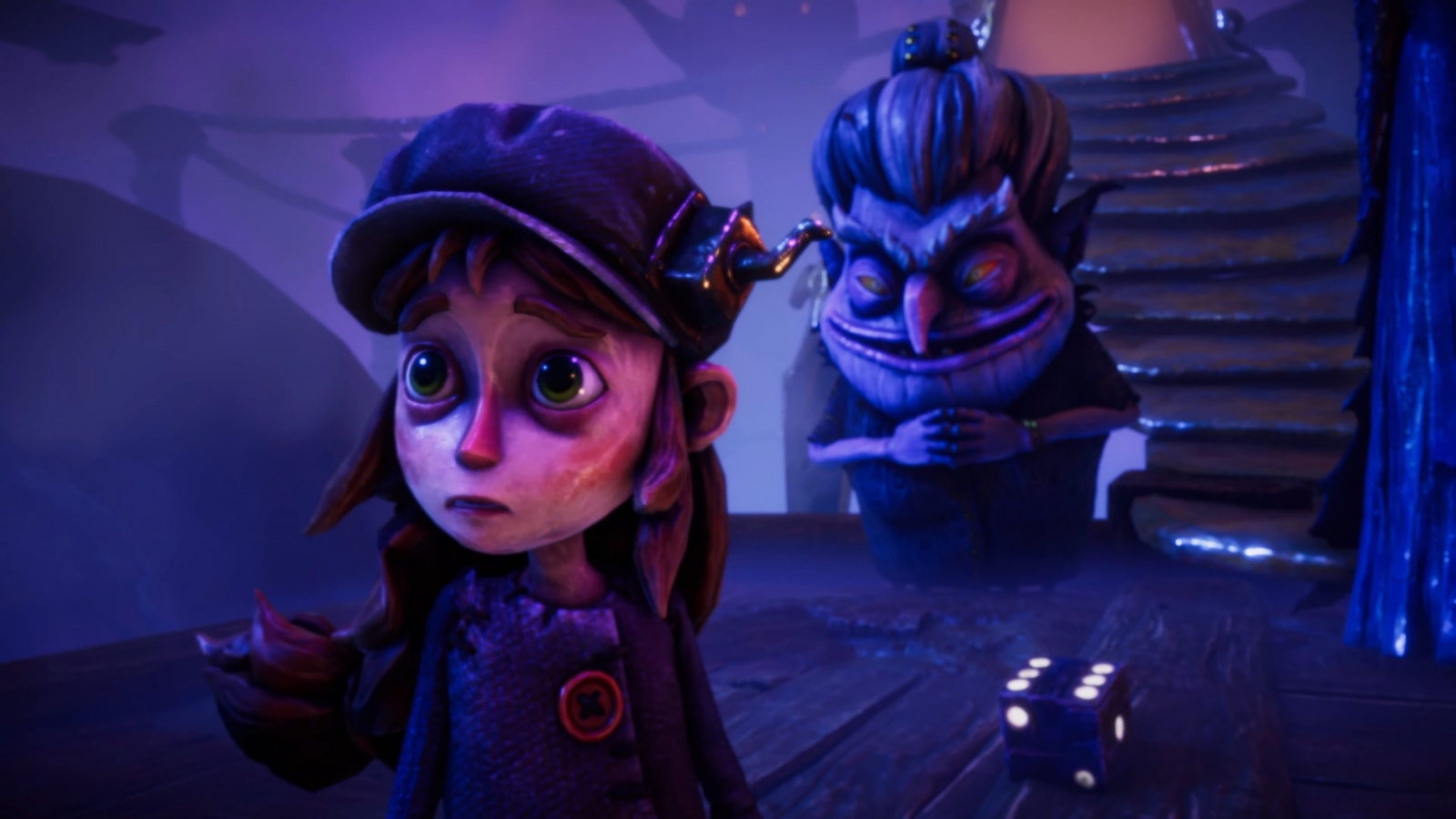 The elements of Lost in Random that caught my attention the most is its intriguing premise and method of storytelling. The world-building alone was enough reason to delve into the bizarre world of Random where battles are fought with a toss of a sentient die and a shuffle of cards, a boss battle can be won with rhymes, characters have double personalities, and a civil war is fought with giant mechanical suits of armor. With how bizarre and, dare I say, random the game’s world can be, I progressively became less surprised with whatever oddities it threw at me especially upon entering the peculiar second realm of Two-Town, which admittedly is a testament to how strange yet engaging the game can be.

Another element of the game that attracted me is its appealing stop motion aesthetics and visuals seen chiefly in the Tim Burton-esque 3D character models and backgrounds. The game’s inclusion of both human and non-human characters also significantly helps its gothic fantastical setting. 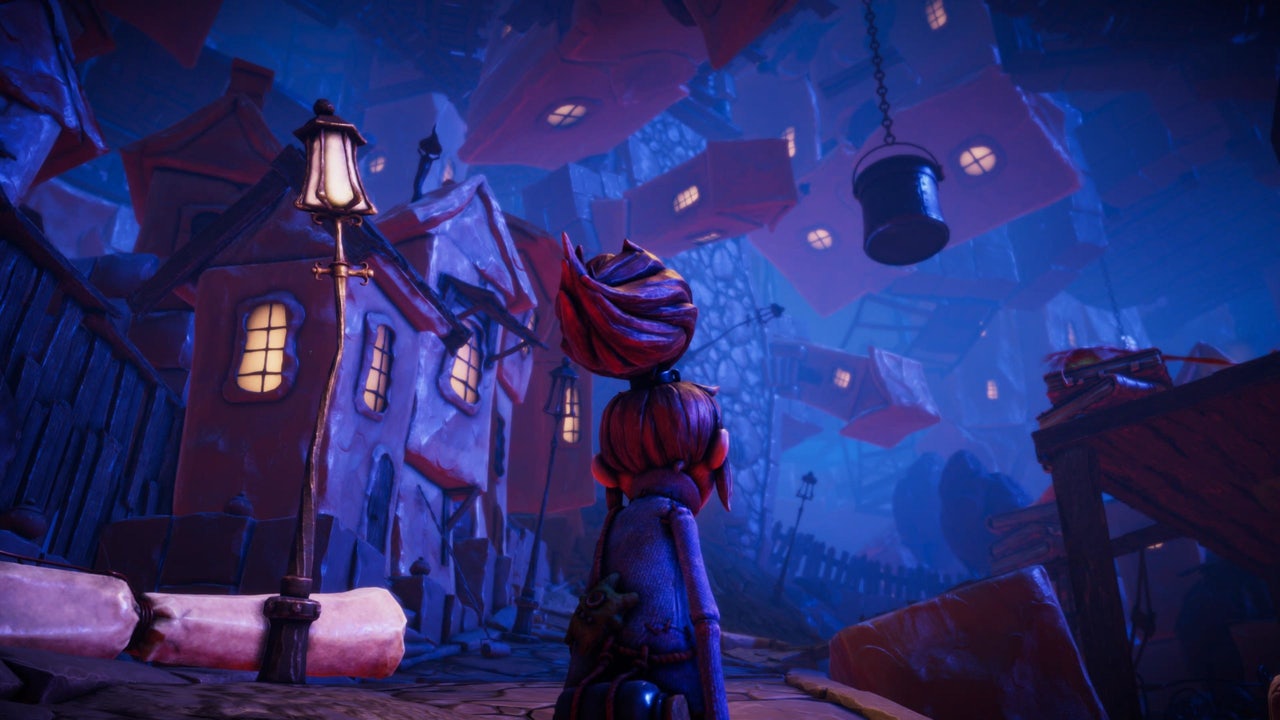 As for gameplay, Lost in Random has one of the most innovative combat systems I’ve seen in a game thus far. All combat is linked to the story, so there are no random encounters or enemies littered around the area. Upon encountering enemies, players will first have to use Even’s slingshot to hit crystals that spawn on their bodies. Doing this will drop the crystals which also serve as dice points or “energy” that’ll allow you to roll dicey. Rolling dicey will freeze time until you unfreeze it manually or attack an enemy. It’ll also prompt a random deck of cards that will spawn all manner of useful items, weapons, and power-ups such as healing elixirs, swords, bombs, hammers, a bubble shield, and more when selected.

And because everything in Lost in Random is in theme, the specific type or amount of cards you can use will depend on the number you manage to roll as each card has a cost attached to it. So roll a one with dicey, and you’ll only be able to use cards that cost a 0 or 1. Roll a larger number, however, and you’ll be able to nab stronger cards and use more cards overall. 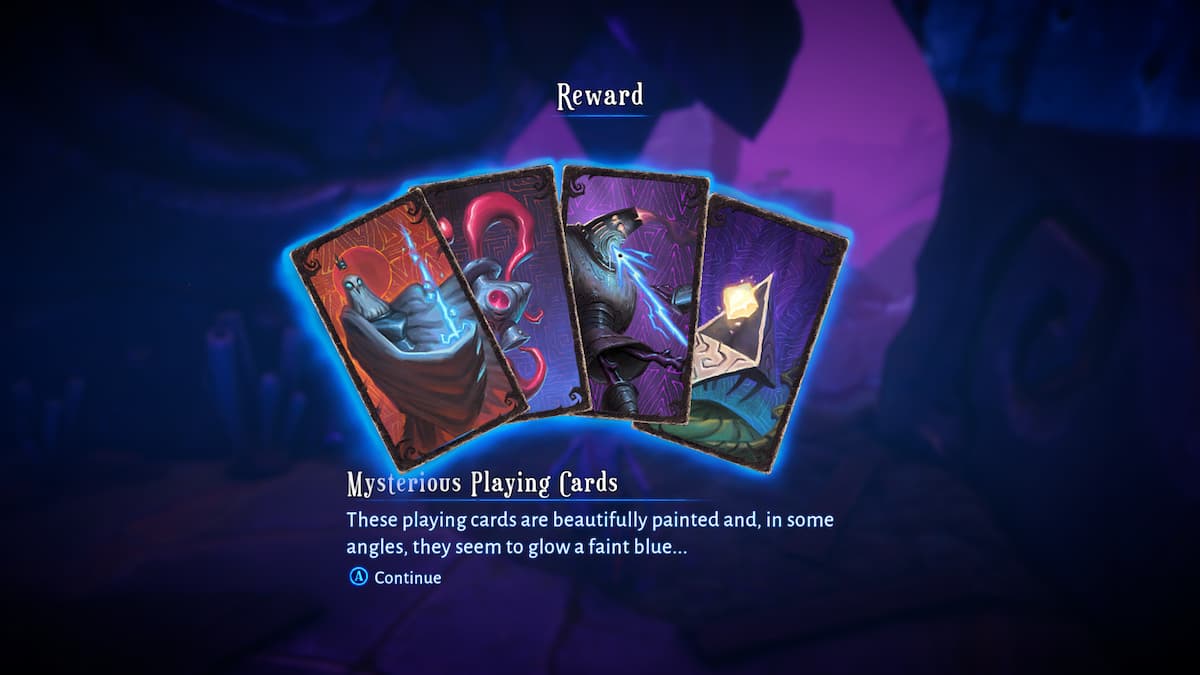 Players who progress further in the game will unlock the ability to create customizable decks, which helps tremendously in battles as you’ll be able to create decks for specific situations. Buy more cards, and more cards will be added to the shop. In addition, you’ll unlock pins that you can use in battle to save cards you can’t afford for the next roll.

The aspect of combat I enjoyed the most is the ability to coordinate attacks thanks to time freezing between dice rolls. Not only does this allow you to set up your next attack, but it also gives you the chance to take a break and strategize your next moves. This is especially helpful because the game will constantly throw multiple waves of enemies at you which sometimes make battles feel overly long and drawn out.

Outside combat, players will be able to roam the streets of Random to solve puzzles, acquire collectibles (namely storybook pages which provide the lore of Random), and more importantly, talk to its zany residents. These characters have a lot to say and problems to solve in the form of side quests, most of which are surprisingly engaging primarily due to the endearing characters attached to them. All characters are fun to listen to with superb voice actors, especially Even, who’s a great protagonist with wonderfully dynamic dialogue and often says things the player is thinking in the moment. 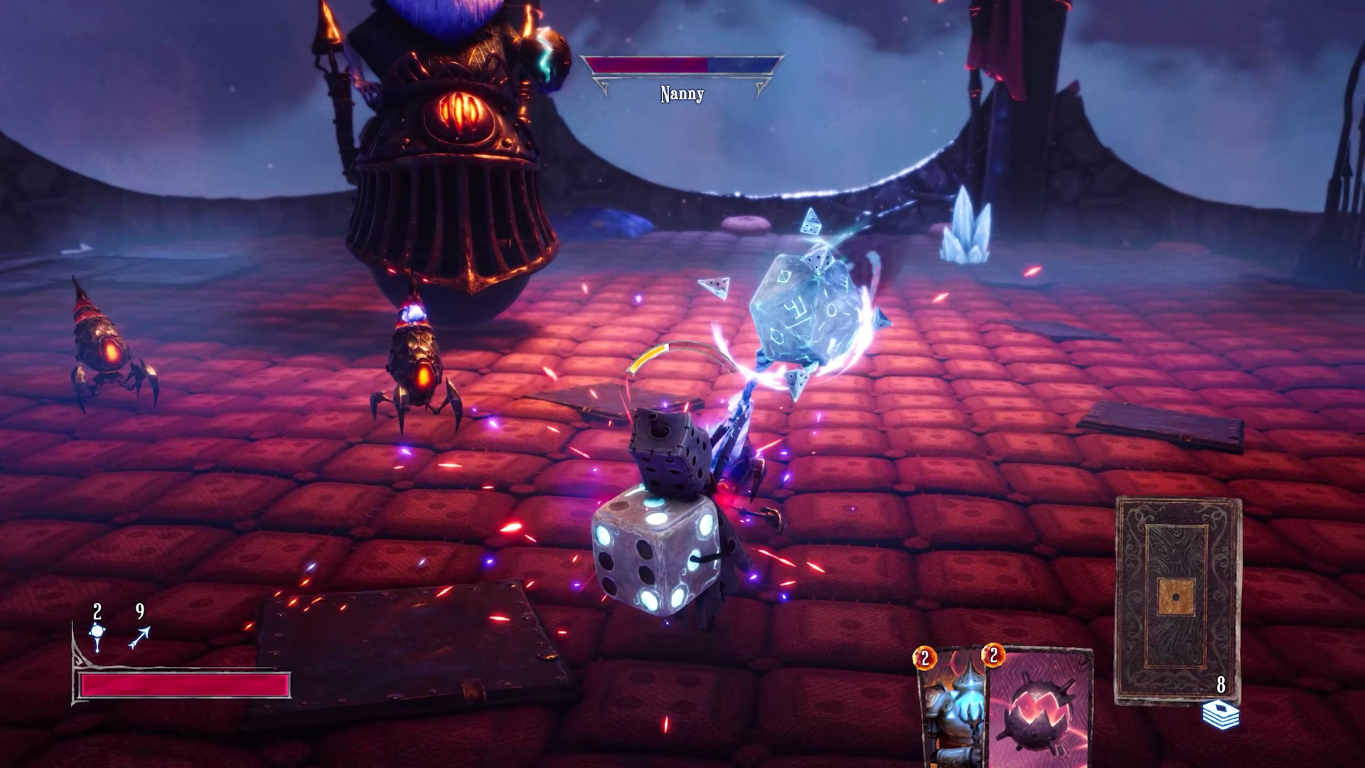 However, an aspect of the game I can do without is the annoying mission structure which starts out simple enough early on but progressively devolves into one fetch quest after another as Even quickly becomes an errand girl chasing after multiple quest items before achieving her goals. The fetch quest mission format in games is one that I absolutely abhor as it only leads the player to grow numb to gameplay, so it’s quite unfortunate that Lost in Random includes it.

Another unpleasant part of the game is the glitches I encountered. While the game runs mostly well on a PS4 Pro, I did notice a few bugs here and there, such as screen tearing, items being out of place, and NPCs not spawning where they should, forcing me to restart the game to resolve the issue.

Despite these few cons, however, I immensely enjoyed my time with Lost in Random. The story is intriguing, the gameplay is engaging, and the overall world-building is done better than most Triple A games today.

Lost in Random offers a highly enjoyable experience with rich, dynamic gameplay and an interesting plot. While it's weighed down by repetitive fetch quests and some bugs, it's easily still one of the most charming games I've played so far.

Abdul Saad is an avid gamer and computer geek. He's been writing for four years on news, reviews, previews, and more on multiple gaming sites. When he isn't writing or playing the latest JRPG, he can be found coding games of his own or tinkering with something electrical.
Related Articles: Lost in Random
Share
Tweet
Share
Submit