We all know team-based shooters by now, whether they be games like Overwatch, Paladins, Splatoon, Valorant, or the plethora of other options out there. The core concepts of these games revolve around various game modes, characters with a variety of abilities, and interesting gunplay. Even with all these options, it looks like another competitor is entering the ring in the form of Rocket Arena. Rocket Arena takes the above concepts and puts some powerful rockets in your hands. It’s a twist on the formula, so why not jump into the fray to see it for yourself?

Rocket Arena is a 3v3 third-person shooter that, unsurprisingly, focuses on rockets. Players can take part in multiple modes such as Knockout, Mega Rocket, Treasure Hunt, Rocketball, and Rocketbot Battle. Each mode has a different goal to achieve but the overall gameplay remains the same. I honestly didn’t find a mode that I didn’t like, but I’ll admit that Knockout and Mega Rocket were my favorites. After I go over the combat basics, I’ll discuss each mode. 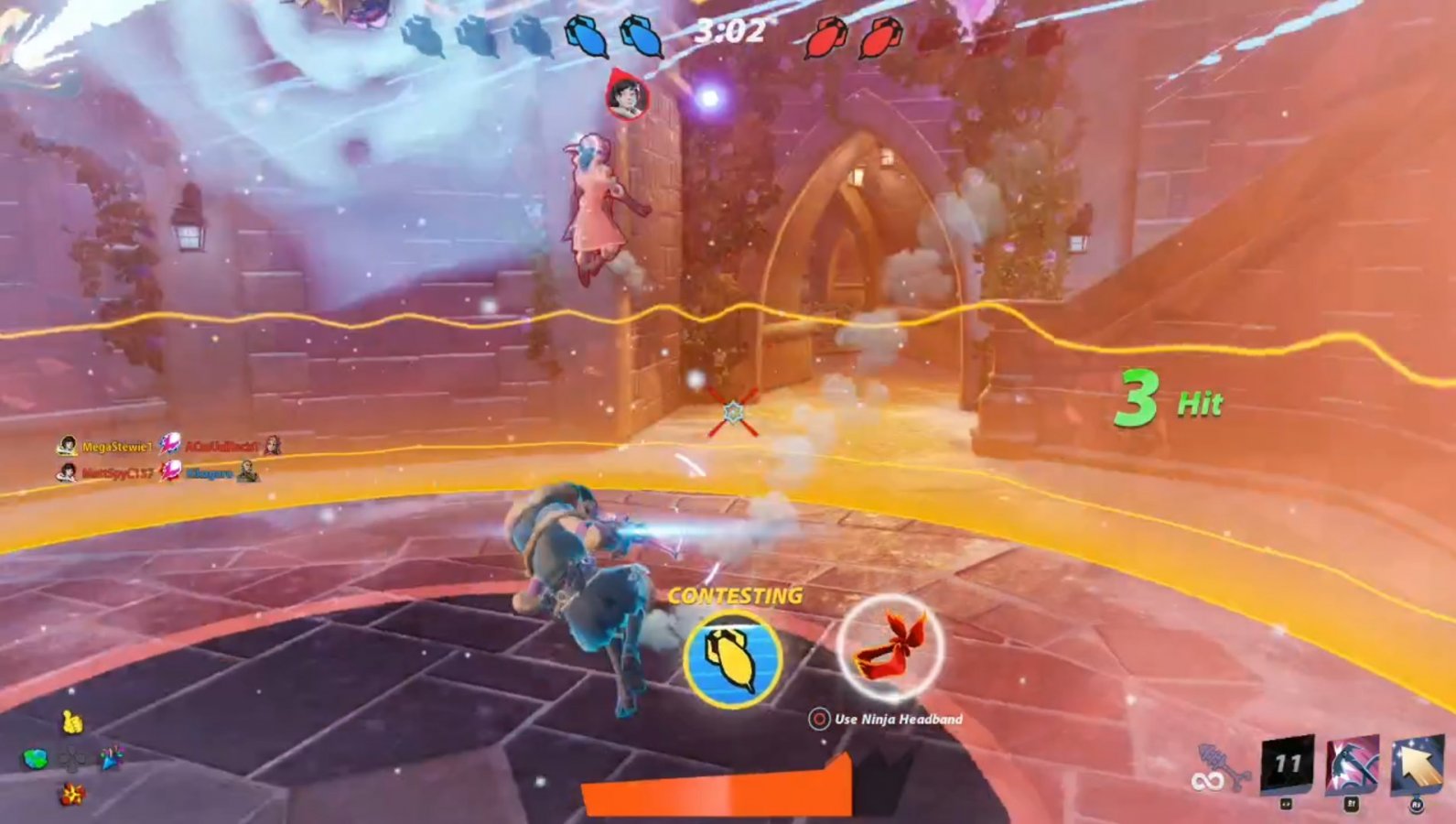 When in the arena, you can run (sort of), jump up to three times in a row, dodge (although there’s a cooldown after each use), fire your standard rockets, fire a secondary projectile, and use your special abilities. When I say you can sort of run, it’s due to the slow pace of the action. It feels sluggish, but at the very least doesn’t kill the pace of the game. Even so, I do wish that the characters could move faster. Each character’s standard rockets are unique, which changes the way you shoot at your foes. For example, Topnotch fires grenades that explode upon releasing the fire button or hitting a target, Plink fires close-range, rapid-fire rockets, and Amphora fires balls of water that can be charged up to become more powerful. Secondary projectiles include Izell’s bola, Rez’s lob mines, and much more. Abilities are specific to the characters as well, so you’ll want to quickly learn what everyone can do; this will help you fight better and survive your enemies’ assaults as well. Abilities range from Blastbeard’s explosive dome to Plink’s teleporter orb and more. It takes some time to get used to how everyone works, so I definitely recommend trying everyone out. Speaking off characters, Rocket Arena launched with 10 competitors, and more will be introduced in later seasons.

I’m sure you’re wondering how defeating opponents works in this game. As players take damage, their blast meter will fill up. When the meter fills to max, it will flash and black lines will form on it; this shows that only one more hit will launch them out of the arena. After blasting through the barrier, the defeated character will ride a rocket back to a spawn point in the arena so they can continue the fight. There are no permanent knockouts, so get back in there and fight! One neat aspect to mention is that if you go a short time without taking any damage, then your blast meter will drain down to empty. This means that if you manage to escape an attack or fight them off well enough, then you’ll essentially heal passively. Your opponents can do this as well, so make sure you don’t let up on them. 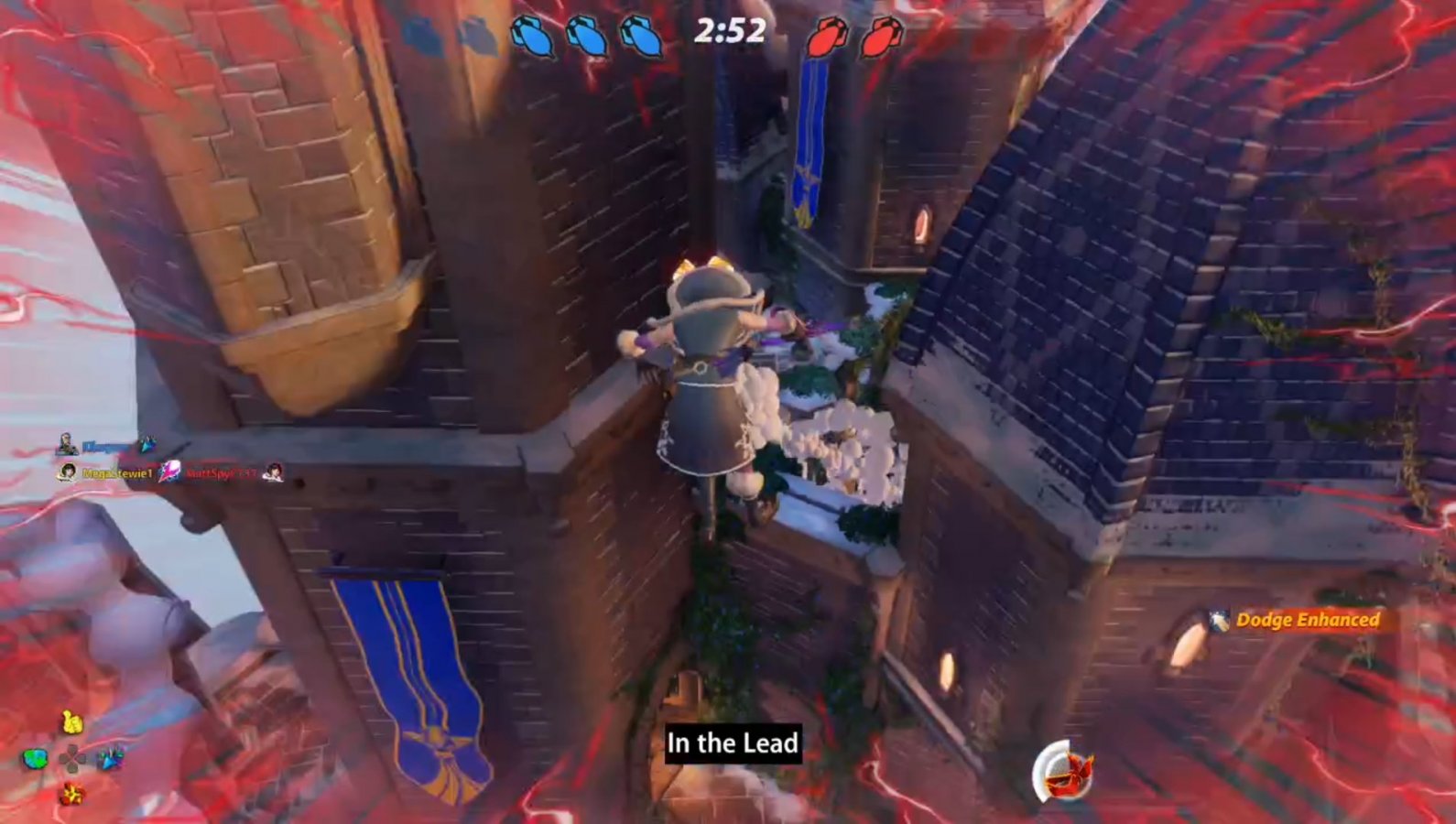 Now on to game modes. Knockout is your standard team deathmatch, so the first to 25 kills wins, or whichever team has the higher kill count when the timer ends wins. Mega Rocket is a domination type mode where a huge rocket will crash down on a designated area after a ten second countdown. The rocket will blast anyone that’s too close away, so you don’t want to be in the crash zone before it touches down. Once it’s safe, a circular zone forms around the rocket that you’ll aim to capture. Stand in the zone with no enemies opposing you for long enough and you’ll capture the rocket. After a mega rocket is captured, the cycle continues, but the rocket lands somewhere else. Everyone focusing on such a small area creates a lot of chaos. Be ready to take some heavy damage and fight hard for those rockets. The first team to capture five rockets wins.

Treasure hunt is a king of the hill game mode where a treasure chest spawns in the middle of the map. The goal is to grab the chest and hold it until the 25 coins are emptied. Whoever holds the chest will slowly earn coins, so it’s the only way to earn coins in the first part of this mode. Teammates need to protect the chest holder, while enemies will be targeting them in order to steal the chest. The chest only gets knocked out of the holder when they are defeated. One thing I didn’t notice at first was that whoever is holding the chest when the final coin disappears from it earns ten bonus coins. It’s a nice incentive to have your hands on it last, but it feels lame when someone gets it for the last two seconds and manages to nab 12 coins from it. After the chest is emptied, the coin round starts. Coins appear throughout the arena for a limited time and players are encouraged to grab as many as possible before they vanish. This is a great way to boost your team’s coin count and get you closer to your 250 coin goal, so don’t slack off. After the coin round, the treasure chest round begins. This cycle continues until one team reaches 250 coins.

Rocketball is like soccer except players carry the ball into the goal. The ball spawns in the middle of the map and players rush to grab it. Just like with Treasure Hunt, you want to protect your teammates and attack the enemy; the ball is dropped upon knockout. You can score by either running into the goal while holding the ball or by tossing it into the ball-shaped goal. Both methods are satisfying, but they can be tough when you’re getting bombarded. The first team to five points wins. Rocketbot Battle is like Knockout, but you’re fighting against A.I. rocketbots. Each team member has three lives and they all must work together to wipe out all rocketbots in the wave. It’s not that hard of a game mode, but it can be some nice practice for the tougher online matches. 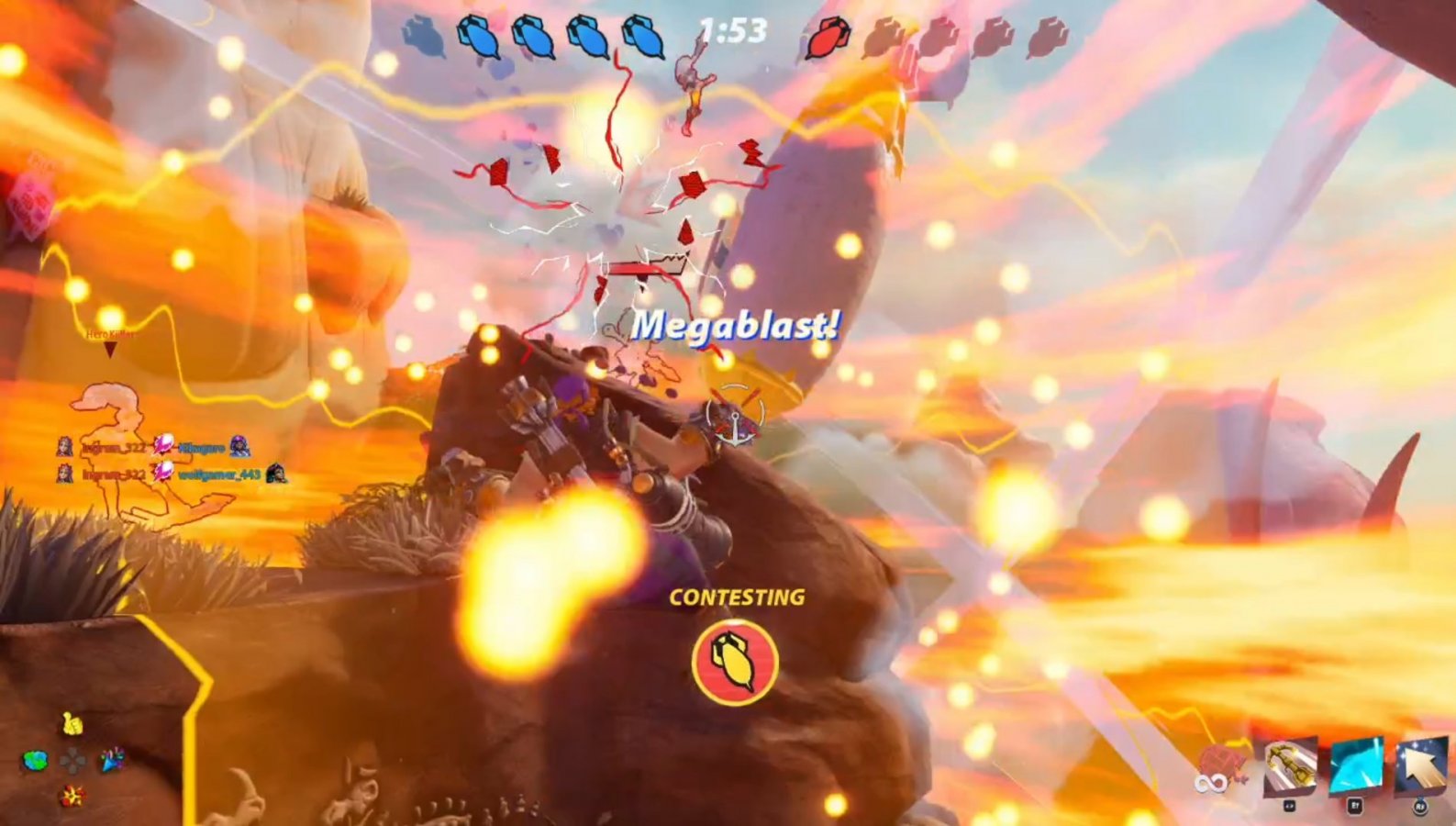 As you play, your characters will earn experience and level up. There’s no overall player level, as each character has their own. Leveling up helps you unlock artifacts (which I’ll go over shortly), costumes, and even various parts of your totem stand. The totem stand is a flag with symbols and patterns that you can show off. It’s purely for aesthetics, so do what you wish with it. Artifacts are equippables that alter various aspects of your characters. Each character has three artifact slots, and each slot has their own list of artifacts that could be equipped there. Examples include increased movement speed, farther dodge distance, increased damage, and more. As you earn more artifacts and figure out your playstyle, you’ll figure out what combinations work best for you. I know I’ve switched my setup around a few times.

Overall, Rocket Arena is an interesting twist on the team-based shooter genre, but it’s not without its faults. The movement speed of characters feels too slow, especially compared to similar games. There are also times when you get pummeled so much that you barely get to do anything. That’s not completely on the game, but the mechanics of the game allow players to relentlessly blast you at times. It can be frustrating and make you want to take a short break. Other than that, the multiple modes available are all fun to play and don’t feel too similar. Even with that said, I’d recommend Rocket Arena for two to three hour sessions at most. One final note: Rocket Arena will have seasons where they introduce new characters, modes, maps, and costumes for free, so they’re already planning on supporting the game for a good while. Now that the rocket’s been ignited, who wants to hop on and blast off?

Rocket Arena is an interesting rocket-based twist on the team-based shooter genre. With unique rockets and abilities, each character plays differently and entices you to try them out. Sometimes you may feel overwhelmed by enemy attacks, especially with the slow movement speed, but that doesn't drag it down much.

Codi loves to play video games and watch movies. He will watch almost any kind of movie just to experience them. His ideas take inspiration from the shows and movies he watches, and games he plays. He also loves a good pun.
Related Articles: Rocket Arena
Share
Tweet
Share
Submit