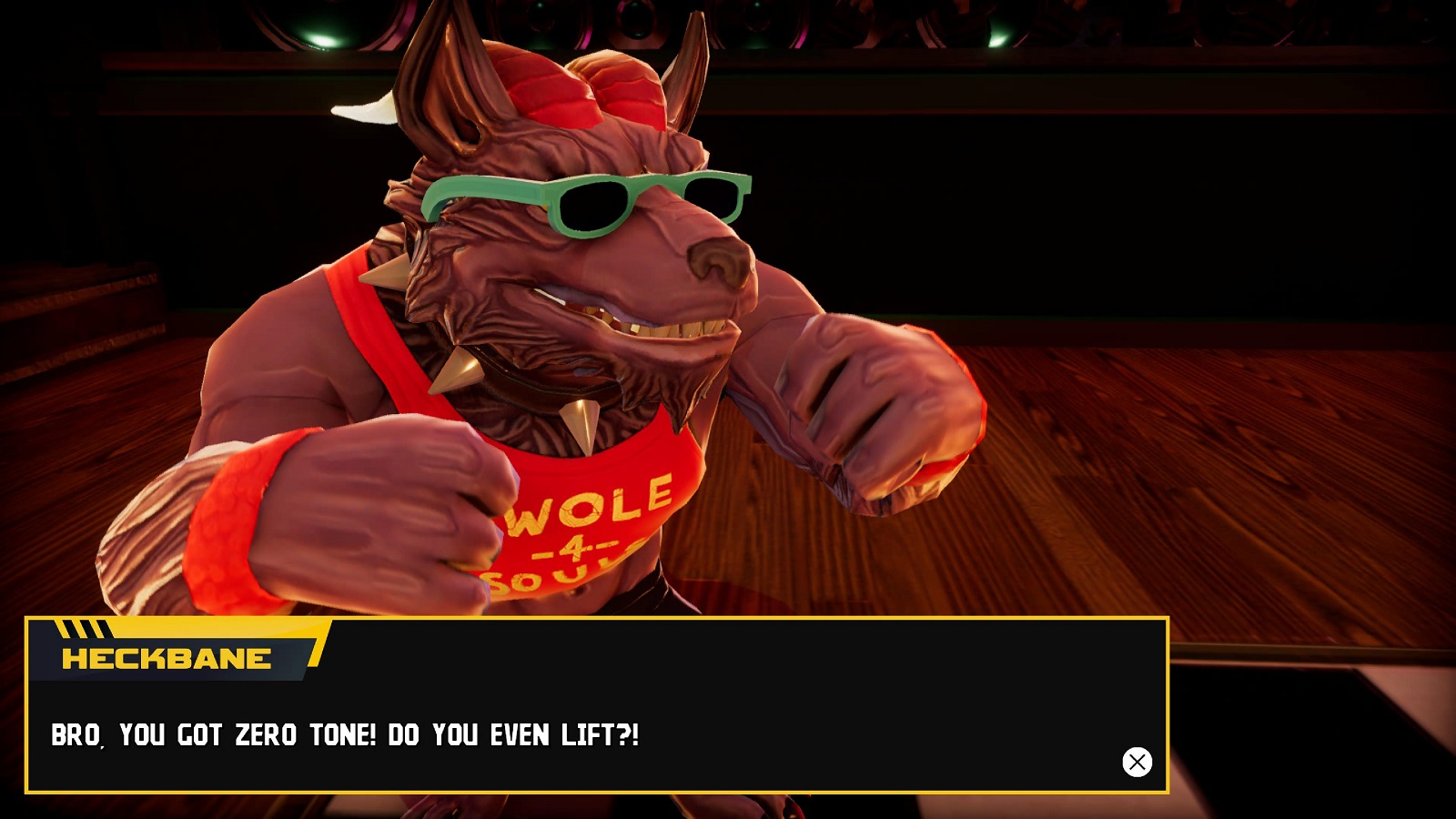 As a fan of shonen anime, I’m keen on appreciating the 3D arena fighter. Even if the fighting subgenre is mired with criticisms of generic and shallow gameplay compared to 2D competitors, there’s just something entertaining about the mindless fun games like My Hero One’s Justice or Naruto Ultimate Ninja Storm can provide. But what if there were core fighting mechanics in an arena fighter? Mighty Fight Federation is the answer to that question, and while it doesn’t pull off everything it wants to accomplish, it does a serviceable job changing up the genre well enough.

For starters, Mighty Fight Federation is, essentially, an arena brawler. You and an opponent are duking it out in order to deplete the other’s life bar. You have a regular attack button and special attack button, as well as a Shift button which gives you more moves if you press it in conjunction with the aforementioned attack buttons. These moves will also change whether you pull them off on the ground or in the air, and depending on the move you can also chain together attack combos with proper spacing and timing, something that’s not seen much in a 3D arena fighter. 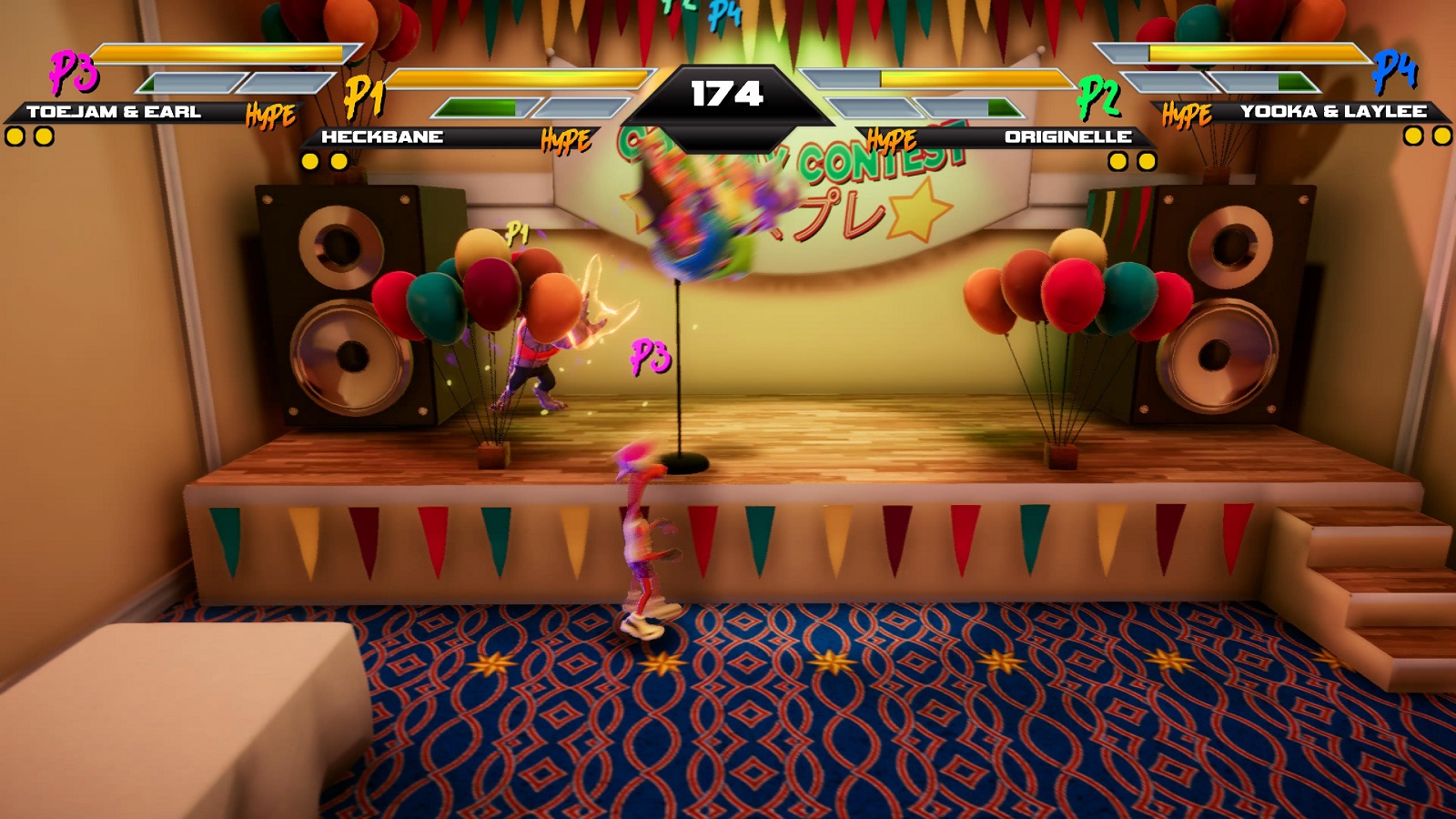 What separates Mighty Fight Federation from other arena fighters is in its evasive maneuvers. Much like the indie fighting game Brawlout (itself a Smash derivative), you’re generally going to be on the offensive because blocking is nonexistent here. In its place are gap closers and dodges (themselves other buttons), with the latter being more effective if you dodge towards an opponent rather than away. Gap closers… well, close the gap between fighters, which is effective against those who use zoning techniques. However, the closer button also acts as a breaker button, which can cancel a punishing attack (or, if you time it at just the right moment, can counter using a powerful red breaker). For those that want to be pummeling on the extreme offensive, you can use the closer button during an attack string to pull off a hyper cancel, which will allow you to cut your current attack and start again.

In order to use the aforementioned moves, you’ll have to fill up your hype gauge, which is Mighty Fight Federation’s special bar. You can charge up to two units of the gauge, and also once per stock you can unleash a damaging Hype Attack. This is different among all characters, so whether you’re into a high-risk grab or a safer zoning special, you’ll want to try each of the 13 fighters on the roster to your advantage. It’s a system that’s unique and well fleshed-out in terms of technical fighting mechanics. 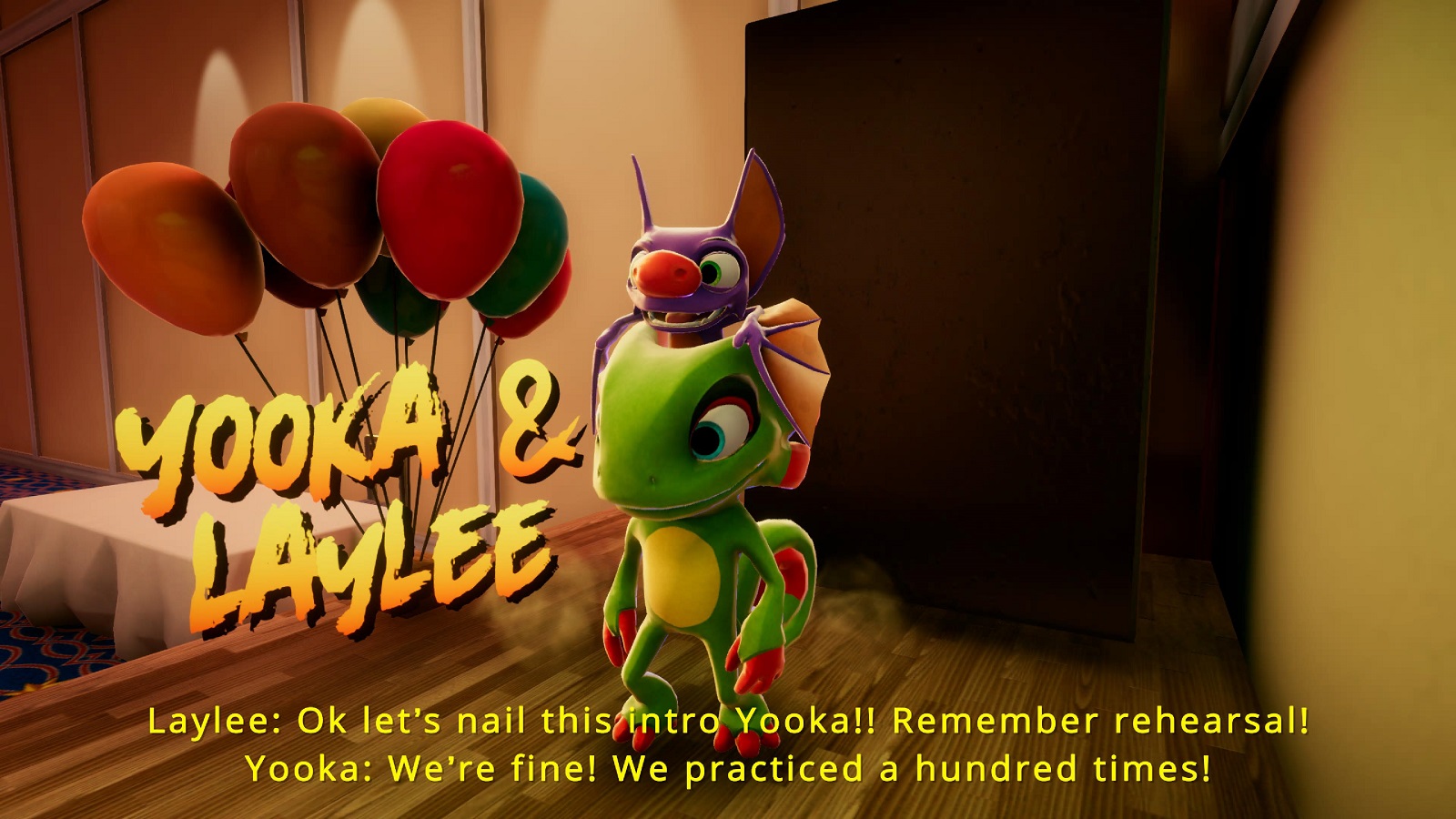 Unfortunately, that seems to be the problem with Mighty Fight Federation. The 3D arena brawler/fighter is a subgenre that’s catered towards casual play, for good reason: 3D fighting needs to be basic because of how movement works in those games. Sure, I got my butt beat tons of times before getting acclimated to the controls, but that’s because 1v1 matches feel one-sided rather than an equal match of wits. Whoever gets the first hit in can always devastate their opponent, and even with the breaker command available, it doesn’t seem like it’s a good substitute for the omission of blocks. I do like the system, but I feel like it would work better as a 2D fighter.

That said, Mighty Fight Federation excels in its free-for-all four-player battles, where you can wreak havoc everywhere and on whoever you’d like. It’s a hectic time where anything can get interrupted, and it’s in these moments where I feel the game truly shines. I don’t have to worry about whiffing an attack or spending hours in the lab because someone can just as easily cancel my opponent’s barrage or even hit me with a Hype Attack. I wish I could get more friends together (or maybe invest a couple hundred dollars in more controllers), because online is basically dead at the moment. However, with a healthy community and other people to play with, this is the perfect party brawler.

I do commend the developers on making a diverse roster in terms of movesets, which helps with the main gameplay mechanics. Each of the characters have a wacky and slightly deranged personality, which is also complemented by their starting and ending arcade segments. The range of the roster is ridiculous, going from Heckbane, a demon dudebro gym owner who joins to get his members back into shape to Charles Edwards Ogden III (CEO)… a CEO. But you also have Originelle, a half angel/half demon hybrid who screams “DO NOT STEAL” when she dies. They’re all quite funny in their own way, but also it feels like the two (well, technically four) guest characters in the roster are out of place in this game. All of the base roster has a twinge of villainous wackiness in them, while ToeJam and Earl as well as Yooka-Laylee have a heroic brand of silliness. (The fact that ToeJam and Earl don’t belong in the tournament is even lampshaded in their arcade campaign!) 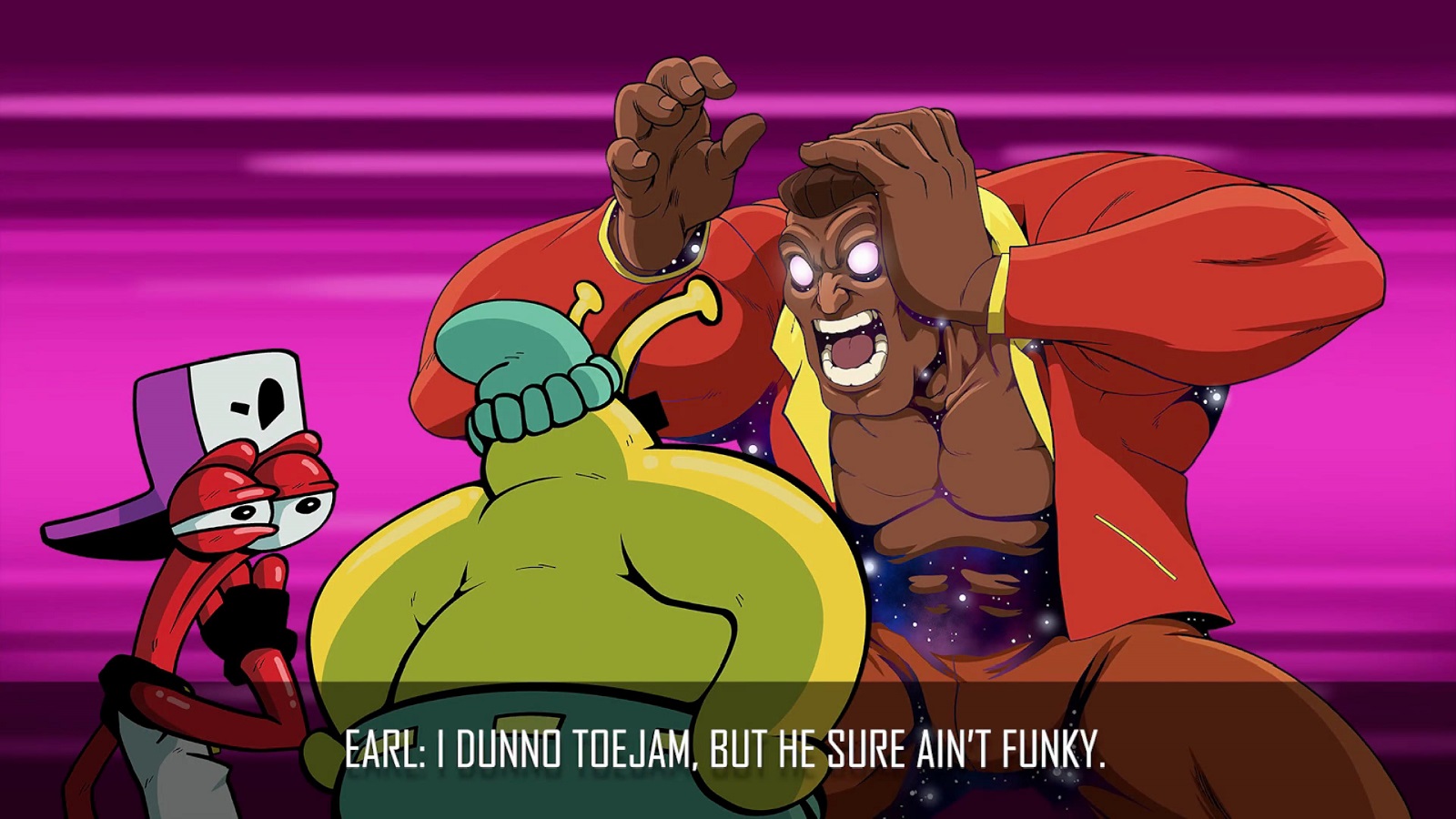 As for presentation and other content, it’s hit-or-miss here. The music is amazing, as it’s done by quite a few well-known composers like Tee Lopes and James Landino. Each track fits the corresponding stages well, and the stages themselves vary in size and design. (My personal favorite is a literal anime convention panel, with an easily breakable wall and accompanying J-pop song.) While the music is great, the voice acting and sound quality is mixed; cutscenes and voiced lines from main characters sound fine, but the extra voices and guest characters feel phoned in. The audio quality of certain lines randomly feels scratchy at times, and while I do understand that a lot of voice actors can’t meet together due to the pandemic, I don’t feel the cohesion of the line delivery here. 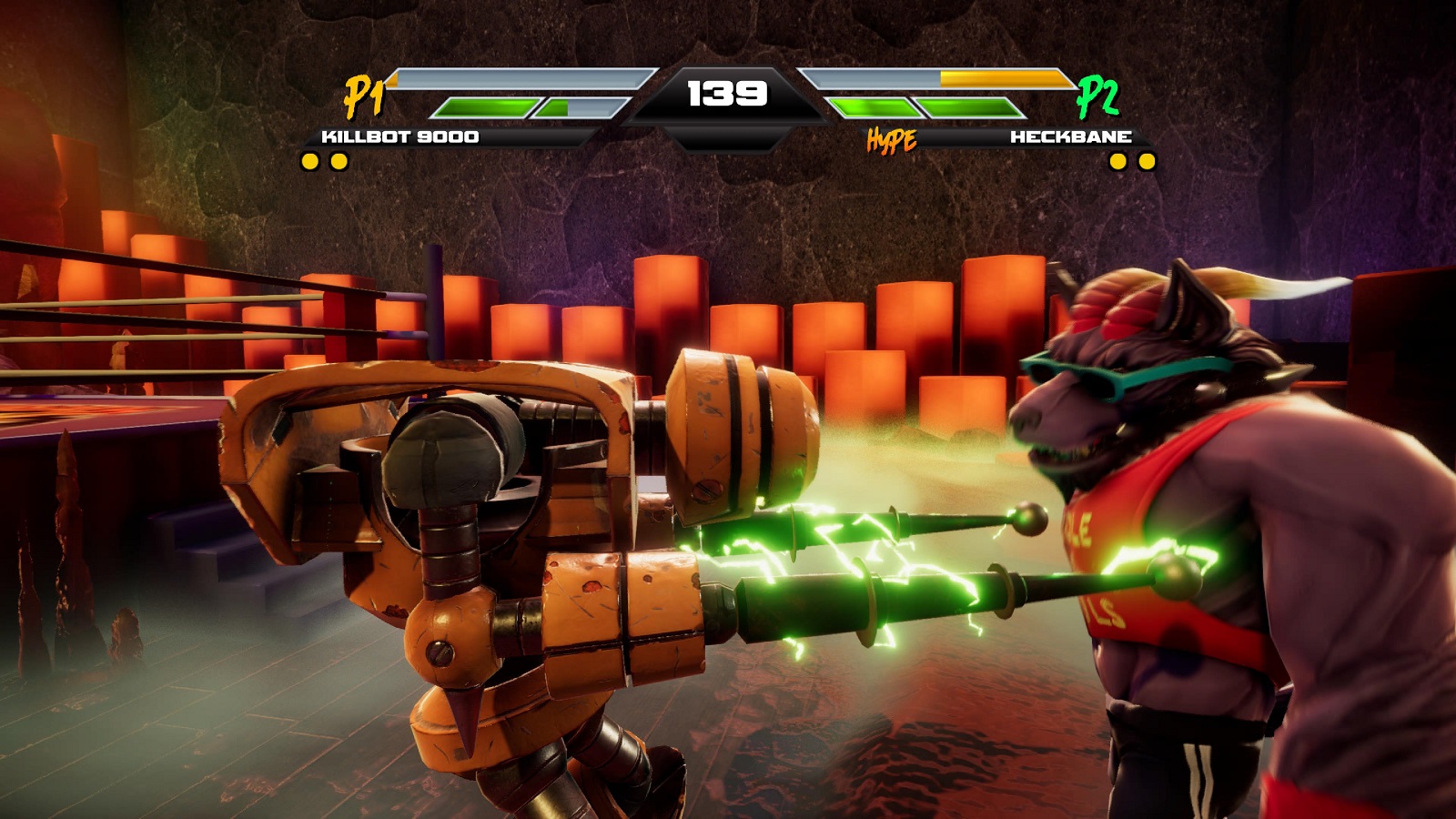 In terms of modes, there’s enough here to justify the $30 price point, but they’re merely adequate. You have single player, local and online multiplayer, training, and mission modes. The mission mode functions like an advanced tutorial, since you’ll be tasked with stringing difficult combos for each character. The training mode has a wealth of technical fighting game settings so you can head to the lab when you want.

Mighty Fight Federation is a wild and wacky 3D arena fighter with more complexities than its subgenre normally has. While this unfortunately causes it to lose its identity and muddle its gameplay, the free-for-all fighting mode and wonderful music is worth the asking price.

Elisha Deogracias is an aspiring accountant by day, freelance writer by night. Before writing for Gaming Trend, he had a small gig on the now defunct Examiner. When not being a third wheel with his best friends on dates or yearning for some closure on Pushing Daisies, he's busy catching up on shonen manga and wacky rhythm games. Mains R.O.B. in Smash. Still doesn't know if he's a kid or a squid.
Related Articles: Indies, Mighty Fight Federation
Share
Tweet
Share
Submit