Pulling off some impressive moves or performing tough tricks always feels rewarding. It doesn’t matter if it’s in a game or in person, in the end you still feel that satisfaction. Urban Trial Tricky knows that and focuses on that in the latest addition to the Urban Trial series. I reviewed Urban Trial Playground a few years back and it was pretty good, so I hoped this new entry would be up to par. Thankfully, it delivered, but not without some faults of its own.

The gameplay revolves around riding your motorcycle through side-scrolling levels with the goal of earning points within a time limit or reaching the finish line as fast as possible. There are also extra challenges to reward you with extra cash if you complete them. They can be tasks such as not crashing, performing certain tricks during the level, and much more. There’s no story or anything to the game, but who needs story when you’re pulling off sick tricks? Don’t get me wrong, I love stories in games, but any story here would’ve likely felt hamfisted in. I like to believe that you’re just a thrill-seeking guy out having fun and trying to perform dangerous stunts. 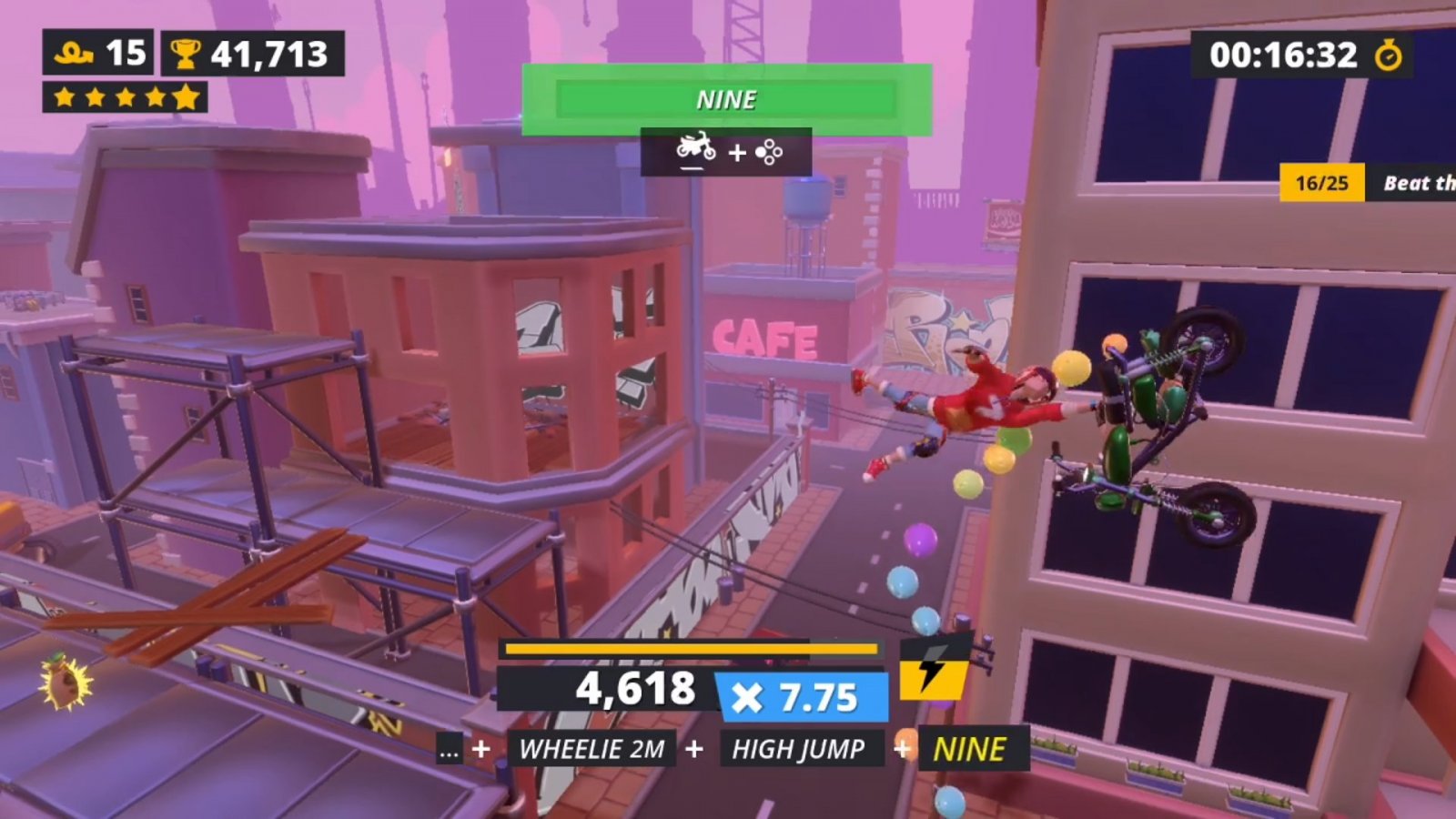 When playing, you’ll be able to accelerate, brake, reverse, and jump, along with performing a variety of tricks depending on what buttons you press. Pressing and holding X or Y while in the air, while performing a wheelie, or while performing a stoppie allows you to perform whatever trick is assigned to that button combination. You’ll also learn more complex button combinations to perform tougher tricks, such as pressing Y, then X, then holding Y, all in quick succession. These take some doing to master, but they’re totally worth it. You can change what tricks you can perform in the customize tab before starting a level, so choose what tricks seem most interesting to you. You can breakdance, do handstands, flip, and much more in order to rack up points and show off how skilled you are. Pressing A allows you to do a 180, which is the only way to turn around. You’ll be using that a lot when trying to rack up points in levels.

As you progress through the game, you’ll earn stars that unlock new tricks in the shop; some are able to be equipped immediately, while others must be purchased with in-game cash that you earn from levels. Besides tricks, you’ll also unlock different outfits for your rider, different bikes, and various paint jobs for each bike. Speaking of stars, you can earn between one and five stars depending on your performance. This means you’ll want to move quickly in time trial levels, and perform plenty of tricks in point-based levels. The best way to rack up points is by successfully performing tricks and landing safely. Doing so gives you a combo multiplier that greatly boosts the points you earn. Going too long without performing a trick ends the combo and awards you whatever points you earned. If you crash or don’t land on both wheels, you’ll only earn the base points and the multiplier gets zeroed out. In other words, be careful and don’t get too cocky! 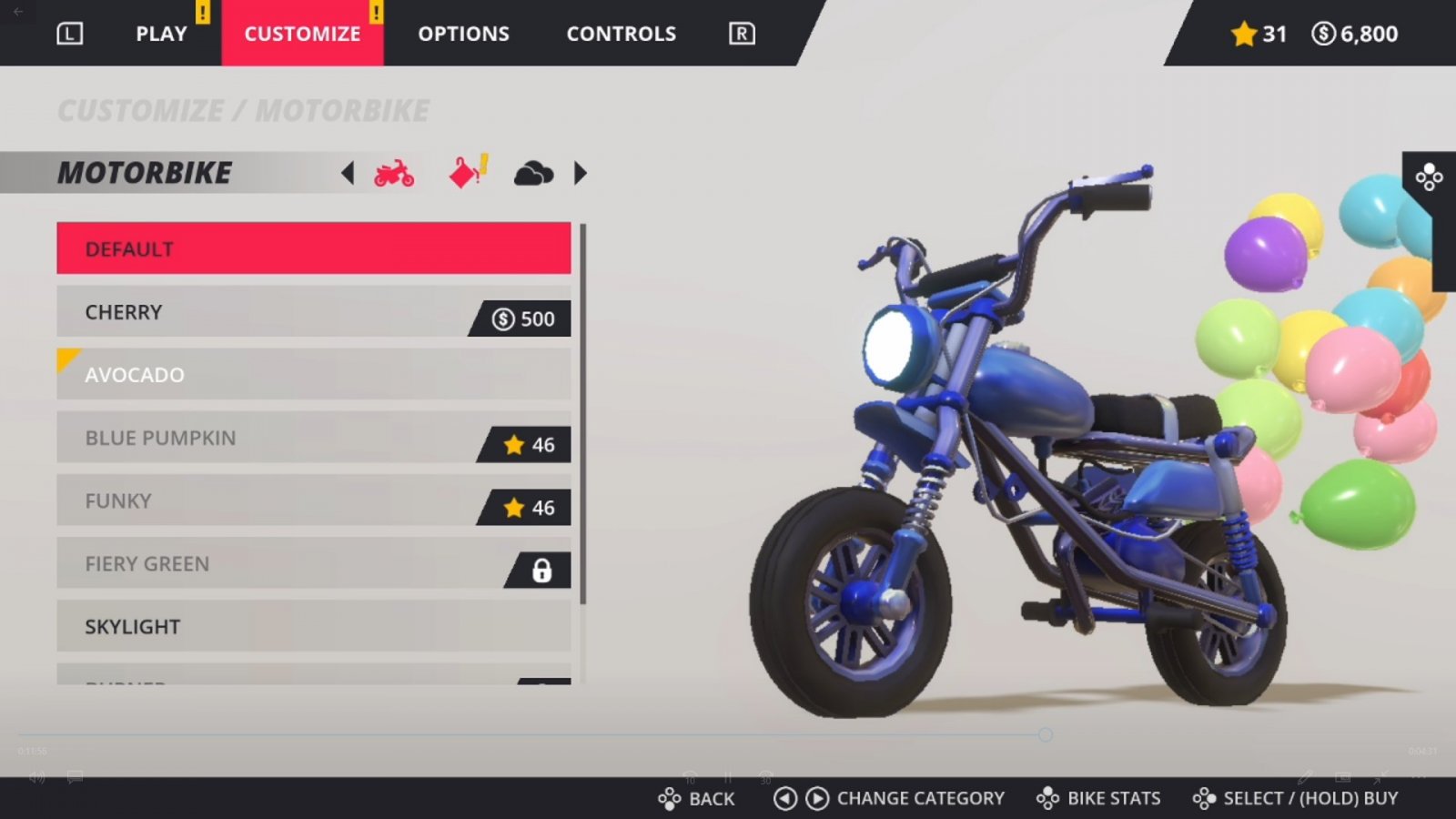 The levels feature some nice locations, ranging from city streets to construction zones to factories. Some of them feel similar to one another, but it’s not too big of a deal. You’ll be riding around, jumping ramps, doing loops, and avoiding obstacles while you work towards the goal of each level. Even with some of the background designs repeating, they still look good and help keep you engaged in the game. Your rider and the environment are both cartoon-like, which plays into the goofy aspect of the game. It’s charming, and it kept me from taking the game too seriously. Throughout the game’s 35 levels, I had a fun time speeding around, jumping high, and pulling off sick stunts. It definitely gets repetitive, but aiming to do better if you don’t get five stars adds some replayability. Even so, you’ll likely only get a handful of hours out of this game, but Urban Trial Tricky is still a good time.

Urban Trial Tricky is a biking game where your goal is to perform tricks and earn points. With a fair amount of cool and quirky tricks you can perform, this game will make you grin. It gets repetitive, so it's best enjoyed in short bursts, but even so, you'll only get a handful of hours out of it.

Codi loves to play video games and watch movies. He will watch almost any kind of movie just to experience them. His ideas take inspiration from the shows and movies he watches, and games he plays. He also loves a good pun.
Related Articles: Urban Trial Tricky
Share
Tweet
Share
Submit