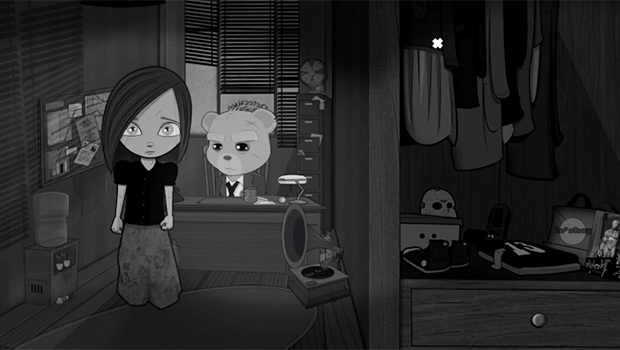 A reluctant duo, ten year old Amber must team up with with the washed up, boozing detective, Ted E. Bear, in order to investigate her brother’s disappearance. Despite being a point-and-click detective game about a girl and her teddy bear, Bear With Me is challenging and far from childish. The game has a great, distinct style, and its characters are not short on personality. The game simply oozes witty and hilarious repertoire and pop culture references, such as Amber explaining how her friend Jason keeps asking to borrow a field hockey mask in her closet. “As far as I’m concerned, he can have it. What’s the worst that could happen?”

Bear With Me’s style falls somewhere between comics, Noir, and Emily the Strange, and its monochromatic pallet makes great use of textures and pops of red. This is the kind of game which makes me want to experience every single detail. Being a point-and-click game, you do not explore the environment by soaking up a beautifully rendered garden or riding across a ridge at sunset, but by clicking on every little item in each room in order to delight in what Amber and Ted have to say about them.

Sweet old Millie encourages Amber and Ted to team up

The opening score is lovely, whimsical yet haunting, and helps transport you into the grayscale world of Bear With Me. Key moments of the story are told through graphic novel pages, which are beautifully illustrated nods to Noir detective movies, and narrated by Ted himself, in all his gravel-voiced, carrot-juice addicted glory. Once the game starts, you undertake your investigation of Amber’s largely deserted house in relative silence, as the game only has music at key points. Beautifully voice acted dialogue and claps of thunder set up the tense atmosphere; flashes of lightning briefly bathe rooms in stunning bursts of light and shadow. Perfectly placed eerie music and unexpected, creepy visions set up several surprising, haunting moments.

Outside of those tense moments, however, the game can be slow. You will have to bear with the load times, as they feel very long, especially if you find yourself having to travel from one room to the next frequently. There is a lot of clicking, a lot of looking, a lot of observing, and a lot of remembering. The pace of the game is further hampered by the fact that Amber and Ted travel across the screen at a snail’s pace. That said, this is a quality game. Clicking is almost always rewarded with a smile-worthy comment or description, and even after several playthroughs, I did not encounter a single glitch or bug.

Amber’s house is full of items, both mundane and strange

Advancing in the game requires a sharp eye for detail and a good memory, as Bear With Me offers little-to-no help if you get stuck. Hints are few and far between, and they are often frustratingly vague. For example, Amber mentions that she and Ted need to go into the attic, and once this scene ends, speaking with Ted will only prompts him to ask, “Where did you say we needed to go?” Gee, that’s what I was hoping you could tell me, Ted.

While a major selling point of Bear With Me is its dynamic and changing storyline, there only appears to be one point of divergence in the first episode. While not insignificant, it feels a little lacking with all of the pre-release chatter about the dynamic storyline of the game. There are plenty of dialogue options to explore, I especially enjoyed tricking Ted into revealing his bird watching hobby time and time again, but all options generally lead to the same result.

At long last I had tackled all the mysteries and challenges to be found within Amber’s house and was ready to take to the filthy streets Paper City. Finally, I would get to meet the mysterious characters Ted had mentioned; I felt like I had finally left the tutorial and was ready to dive into the main game. Amber and Ted have a brief conversation with an incredibly touching comment about Ted’s former partner which left me wanting to know much more as they, at long last, walk side by side into Paper City. And then the credits roll. “End of Episode 1.” Bear With Me ends just as the game is finally beginning, leaving me yearning for Episode 2.

I could power through Bear With me in an hour or less, but this game was not created for those who race to the finish line. This is about the journey, not the destination. The real joy of Bear With Me comes from chatting with imaginative characters, chuckling at their dialogue, and finding lamps which are described as “save point” and “sandwich.” The various Steam achievements, which unlock by clicking on different objects, helps to encourage you to find and enjoy each and every item in the game.

Bear With Me is an entertaining, witty point-and-click investigation game with a Noir twist. Its strong characters, unique style, and snappy dialogue will resonate with fans of the genre. The game is held back by slow load times and a surprisingly short story, but provides a great little adventure and a solid overall experience.

Chaotic wholesome. Dice-maker. DM and TTRPG performer. Shiny Pokémon hunter. Kay works in video games during the day, speaks at conferences during the weekends, and pretends to be an orc, tiefling, android, etc by night.
Related Articles: Bear With Me
Share
Tweet
Share
Submit