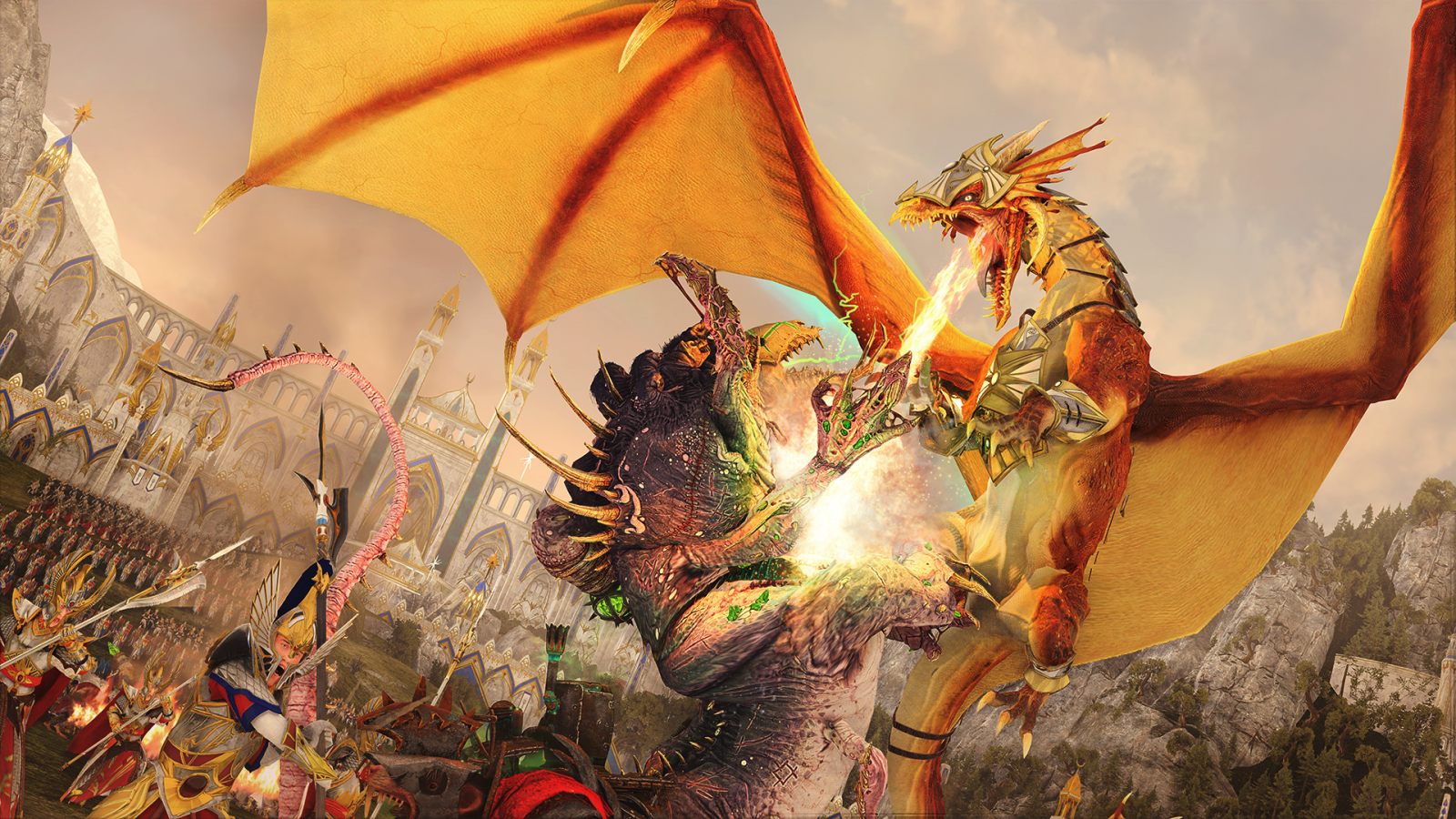 Creative Assembly’s Total War series is a long-running strategy juggernaut, deep in tactics and heavy in management. Fans of Games Workshop’s Warhammer Fantasy tabletop game have hoped, prayed, and made sacrifices (well, hopefully not) over the years so that these two darlings of strategy might be married up into an unforgettable RTS experience. That time finally came last year with the release of Total War: Warhammer. Nearly a year and a half later, I’m fresh off playing about 50 hours of the newly launched sequel, Total War: Warhammer 2 (TWW2), and ready to render a verdict.

While the core mechanics of TWW2 remain the same as its predecessor, there are quite a few notable differences as well—some good, some bad. First and foremost among these is the presence of four new playable races: the Lizardmen, Skaven, High Elves, and Dark Elves.

Each race looks stunning, the new monsters and animations yet another triumph notched into Creative Assembly’s belt. The new armies are an awesome sight to behold and a joy to command, but the Skaven do require a hefty amount of micro-management to be effective. Economically, and on the battlefield, they’re very distinct, fielding unique abilities, unit rosters, lords, and heroes which demand different tactics, as well as racially specific bonuses and building chains.

In stark contrast to Total War: Warhammer, the single-player campaign takes a new direction. The previous game’s focus was on the impending invasion of Chaos. You were meant to expand and conquer, but also to prepare for the arrival of the forces of evil. Once you had defeated them and controlled enough settlements, you won.

Now you’re fighting for control of The Great Vortex, a gigantic, swirling mass of eldritch energy which has the potential to bring about the world’s end. Each of the four new races—many factions of previously familiar races are dotted around, but they don’t compete for the same end goal—must vie for control of The Great Vortex by completing a series of rituals. These rituals take time to complete and your lands will be subjected to powerful enemy invasions attempting to disrupt this process, so it’s important to be ready with stout defences beforehand. You may disrupt your enemies’ rituals by conquering one of the three designated cities linked to that ritual. Complete all of the required rituals and a final climactic battle, and you’ll be declared the victor, regardless of how much territory you occupy.

The campaign map is also brand new, and this time around it features vastly more open water than the previous game. This is of particular import because you may need to interfere in your opponents’ rituals by sailing across the seas, otherwise you must invest in the expensive, AI controlled, and mostly useless intervention armies to do the job. While the addition of more water is aesthetically pleasing and offers a welcome change of pace, it also brings sharply into focus a common complaint of the series: the lack of controllable naval battles. Many fans have griped about this since Total War: Warhammer, but there’s more than few problems incorporating the type of naval battles as seen in other Total War games.

The biggest problem is simple: the Warhammer tabletop game never had naval units or battles (some of the lore does mention ships, however). This creates a mess for Games Workshop and Creative Assembly, both in licensing and in deciding who, or what, will be created for these naval conflicts and how, or if, those things will then be injected into Games Workshop’s tabletop game and lore. There’s another nasty can of worms regarding Age of Sigmar as well (Google that if you’re curious), but that’s not within this review’s scope. As frustrating as it is to see your expensive, battle-hardened armies take a trip to Davy Jones’ Locker based purely on the roll of a dice (read: autoresolve), it’s likely not something that will be going away anytime soon.

Along with a new campaign map and the new races dotted around it comes another new feature: climates.

The four new races are adapted to vastly different environments and will suffer a series of penalties when outside of those areas. The scaly Lizardmen, for example, prefer warmth for their cold-blooded, reptilian constitutions. The more severe the climatic differences, the more your settlements in those areas will be penalized with things like increased building costs and times, slow unit replenishment, lower profits, lower public order and more. Unlike Total War: Warhammer, any race can occupy any settlement, but frequently it’s better to leave it empty than to deal with the negative effects.

Creative Assembly has added rogue armies that may appear spontaneously in your territory and run amok. You can also search reefs and wrecks in the ocean for treasure, enact one of four powerful racial rites, and partake in many more quests and missions than before. All in all, it adds up a lot of clicky fluff and unwanted beginning of turn pop-ups instead of meaningful gameplay.

To round it all out, a bevy of so-called quality of life tweaks have been added, many of which have been requested by fans for quite some time, including a nicely overhauled tutorial. End of turn reminders have been improved, in-battle notifications for routed units have been added, and my personal favourite, a reminder for those countless times you forgot to move an army during a turn. In general, Creative Assembly has really improved and streamlined the overall user experience.

For a sequel that is so heavily based upon the ideas and mechanics of its predecessor, TWW2 still feels properly differentiated, offering an assortment of exciting new content. It boasts some nice UI tweaks and improvements, many of which have been requested by fans, both in and out of battle. The new end-game is a welcome and necessary addition, as are the beautifully animated new races, but most of the added content that isn’t campaign essential tends to feel fluffy and, frankly, annoying. Minor gripes aside, this is still an impressive RTS experience and a gorgeous digital representation of Warhammer.

Even after the first two installments and a few hundred hours of gameplay (yes, really), it’s impossible not to be eagerly awaiting the next playable expansion (Tomb Kings, anyone?) and the final iteration of the series.

Taking the familiar end-game in a much needed new direction and introducing four new races, Total War: Warhammer 2 is packed with fresh content, with more yet to come. Although some of the additions are more annoying than engaging, the overall experience delivers strategy and style in spades. A must-have for Warhammer tabletop players and Total War fans alike.