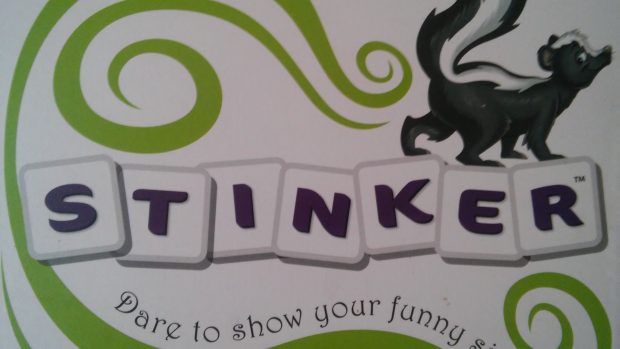 Language is a thing of beauty. As I write this I navigate a flow of multiplicitous intentions and  representations to ultimately communicate something to you. I am in love with the crucible of the written form, parsing out the essential from the wasteful in every clause. Stinker, a party game for up to six players, brings up every one of these feelings as it presents a linguistic puzzle to be solved. Unfortunately its delivery on this premise is at best sporadic, and the heights the game promises only highlight its inability to achieve them.

Stinker is simple in concept, and a concept I can truly get behind. Each player has a randomly drawn collection of 35 letters and two wilds. One person draws from a deck of cards with prompts (A Battle Cry, The Advantage of Having Quintuplets) and the game becomes a race of creativity and linguistic prowess. The only timer is the players themselves. The last person to finish discards their answer and judges the others. The winning response gets a point for every non-wild tile they used. Then everyone slides all of their tiles to the player to their left and the game repeats until ten rounds are complete.

With that description you may be thinking Stinker is a grand party experience defined by creative turns and bouts of laughter. Sometimes this is true. Whatever else I feel about the game it has given me some great moments. There may be those who come to love Stinker, but I find too many reasons not to be among them.

To begin with, Stinker’s name and art all revolve around a skunk theme which is…baffling. A smirking skunk smugly trots across the box art, card backings, and tiles. Stench pours out of his backside and covers the components in wafting green smell lines. There is something offputting about the game’s sickly green skunk scent, but that would be forgivable if there was some tangible connection to a coherent theme. What does a skunk have to do with word games? The notion that you are trying to avoid creating a “stinker” feels eminently tacked on. My only theory is that they wanted to give this more of a family feel than the austere Scrabble and thought a cartoon mascot would help the matter. It only serves to confuse what cohesion the game has going for it.

This face. This is the face that stares at you, smiling, as it covers your cards in its stench.

The fact that the final player has to judge the round gives the role an air of disappointment. Their efforts to problem-solve grind to a halt and get discarded. Their participation changes in tempo and type in a jarring shift. Because there is no guarantee of participation any player who wants to (or has to because of age or facility with the language) take more time with their responses they are constantly throwing out their work and losing the chance to even try to get any points. Timing is inconsistent for the other players, who might finish quickly and have to wait an uncomfortable amount of time.

The card prompts are a mixture of humorous, trivia-based, and thought provoking. This variety gives the game a wide array of ways to test its players but it also makes for a deeply inconsistent tone. Some of the cards are thought provoking, some humorous, and some seem designed to be purposefully dirty just for the sake of it. Each individual prompt gives room for some wonderful creativity, but that only reminds you of the constant limitations of the letters in front of you. In a way the thoughts that explode in your mind as soon as you see them work to the game’s detriment. You will often come up with the perfect response just to realize your letters do not support it. You end up with something far from ideal much of the time that disappoints more than it challenges. In an effort to address this the rules tell you to ignore spelling freely and use letters however you choose (turning an N into a Z for example). The principle is to give you more options, but it only serves to contradict the game’s central premise. I mean, it’s a game about stringing letters together that explicitly tells you to ignore conventional rules of spelling. This flies in the face of either game design or general linguistic principle and possibly both.

For what it might be worth the tiles are solid plastic and their cloth container could easily be carried anywhere. The same cannot be said for the cards, which are so thin they would not be likely to put up with much punishment and stay intact.

Stinker is not something I can recommend to most. I appreciate its intent and hope someone refines this premise, but in its current state only a select few will keep it in their collections for regular use.

Stinker is a game of creativity and spelling puzzles that works great some of the time and serviceably the rest. It is never truly terrible but its flaws constantly overhang like the stench emblazoned on its cards.

John Farrell is a legal aid attorney specializing in domestic violence, living in West Chester Pennsylvania. You can listen to him travel the weird west as Carrie A. Nation in the Joker's Wild podcast at: https://jokerswildpodcast.weebly.com/
Related Articles: Stinker, Tabletop
Share
Tweet
Share
Submit