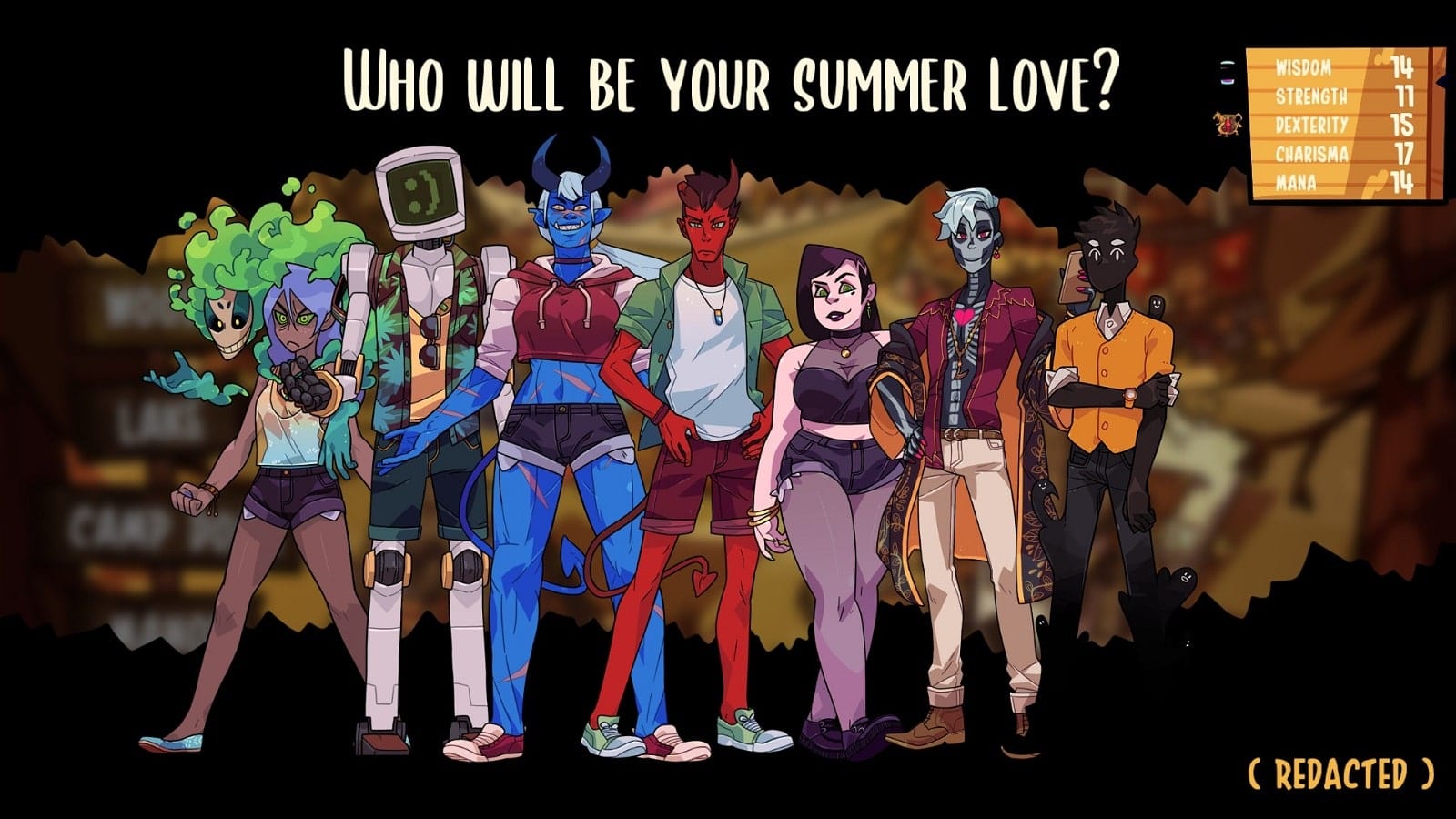 The unsurprising success of Monster Prom has opened the floodgates for a deluge of sequels and spinoffs. Monster Camp is the first to cross the finish, graduating from quirky mini-story to a full-fledged standalone entry. Behind it, a long line of monster-themed dating simulators waiting to give you more of what you love, plus a few twists. Like the 2018 installment, Monster Camp brings the laughs, the love, and all the references developer Beautiful Glitch could cram inside. Fans of the original will feel right at home; the gameplay remains relatively untouched, save for a number of adjustments.

Most notable is the change of venue, taking the quest for love out of school and into the woods, where the monsters spend their weeks getting into a myriad of bizarre situations. Monster Camp brings back two of the original cast, Calculester and Damien, alongside four new love interests. Joining them on the camping trip are the four playable monsters from the first game. While the other entries introduced alongside Monster Camp aim to introduce new gameplay elements to shake up the format, this sequel polishes the tried-and-true formula to a shine. 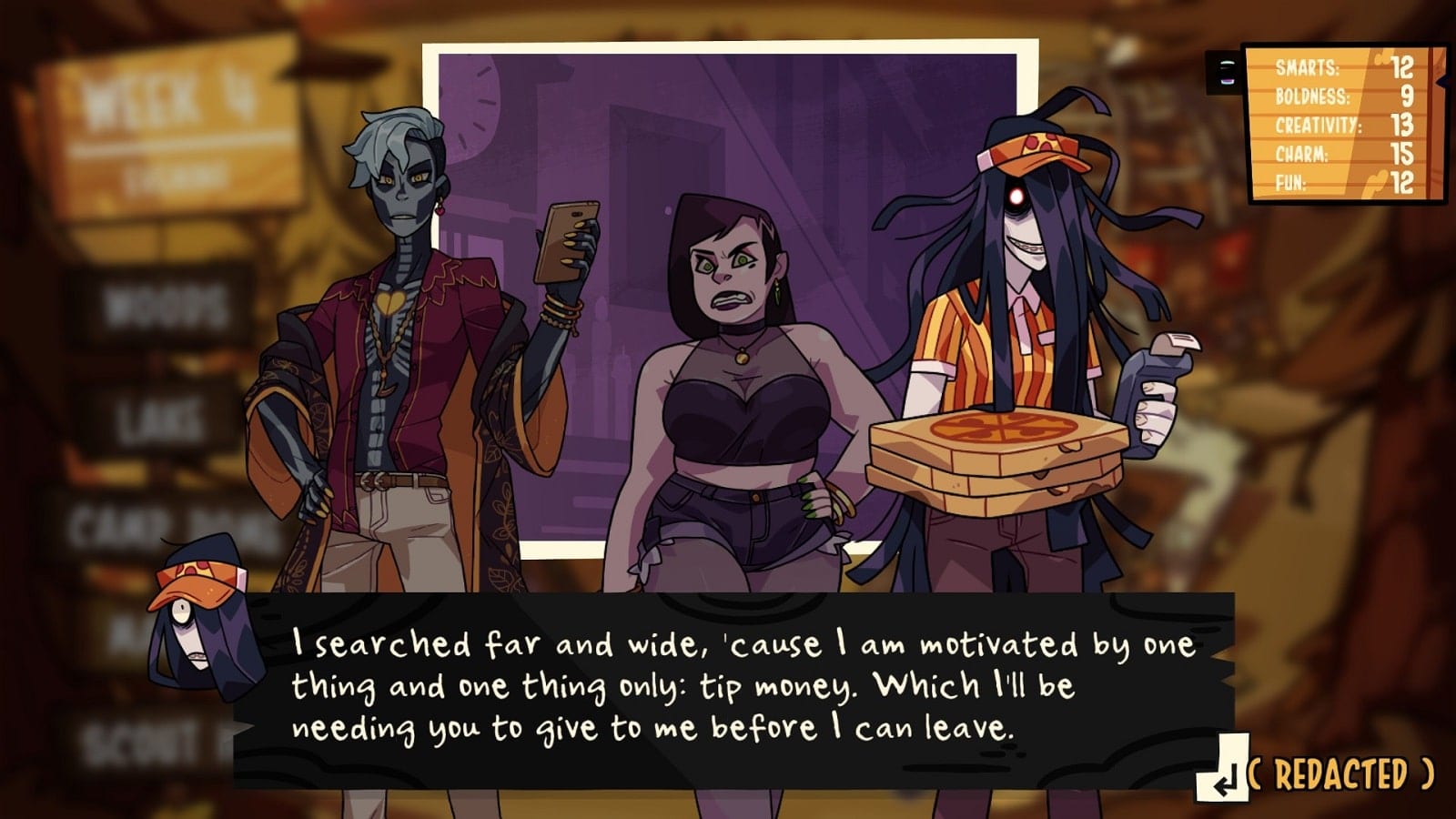 Solidarity with my gig workers out there.

Prom has come and gone, but your lust for love has pointed you in a new direction: the meteor shower. You have but a few short weeks to win over the monster of your choice and join them in watching the shower. To that end, you’ll have to smooth talk your way into becoming the perfect monster for your perfect monster. This time around, the humor has been cranked up to 11, drowning every conversation in jokes, puns, and references. And if trading quips wasn’t enough, a new cocktail minigame provides that hit of unpredictability you needed to make your trip a memorable one.

Like its predecessor, and all its unreleased cousins, Monster Camp lives and dies by its writing. The game excels at its brand of ultramodern comedy — the writing combines absurdist humor, internet comedy, a touch of edge, and giant helping of dirty jokes. For those with less affinity for certain facets of its comedy, the game features plenty of options to tailor your reading experience. The franchise knows its demographic all too well, and gamers who aren’t immediately enamored by some aspect of its writing will find little success with Monster Camp.

The game opens on a school bus, where the personality test from Monster Prom has been replaced with a trip-packing minigame, your selected items influencing your starting stats. The “money” stat has also been removed, with shop items replaced by the items you chose to join you on the trip. Your weeks at camp will be spent training your five remaining stats: smarts, boldness, creativity, charm, and fun. By participating in various camp activities, in lieu of classes, your stats will see an increase, with a chance for bonus gains (or unfortunate losses) during subsequent interactions with potential love interests. 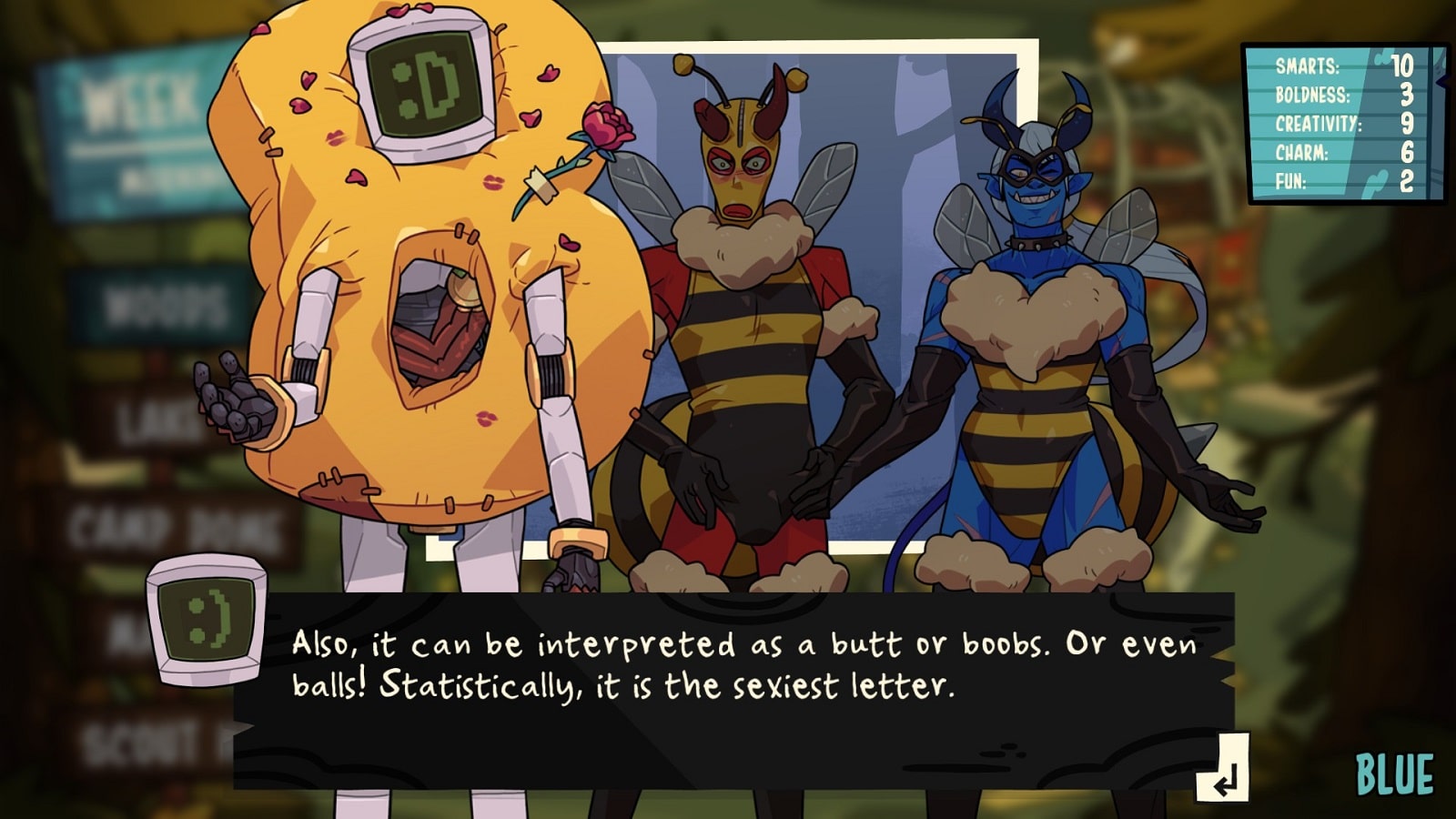 What people are really using supercomputers for.

Stat checks determine whether or not you’re worthy to woo your love interest, so which events you participate in is very important. The monsters’ stay at the camp is divided up into time slots, the number of which is determined by the game length chosen at the start. Short games feature a total of 10 events leading up to the meteor shower, long games feature 16. Medium-length games are also available in the multiplayer mode. Interspersed between your camp activities are campfire gatherings, which replace the cafeteria from Monster Prom. There, you can choose to sit with your future date and impress them with the right dialogue option.

Twice in a game, the campfire talks are capped off with the cocktail minigame, where you battle it out with AI (or other players) for your desired drink, afterwards being subjected to the stat modifiers or status effects of said drink. The minigame starts with a wall of cocktail silhouettes that slowly get replaced with the actual drinks as a timer ticks down. After deciding on a drink, get physical with your selector and push other monsters’ selectors off of your drink. Once the timer hits zero, you’re given whatever cocktail your selector was on last.

Cocktails are an odd addition to the campfire camaraderie, but the randomness they introduce keeps every playthrough spicy. You never know when a random drink surprise could spoil your session or steer it in bold new directions. For the multiplayer audience, battling over drinks to sabotage other players or serve your own goal is that extra competitive kick the mode has always needed. Combining that with the regular antics of multiplayer — fighting over love interests and sharing in the laughs — makes the mode a must-try for dating sim fans. 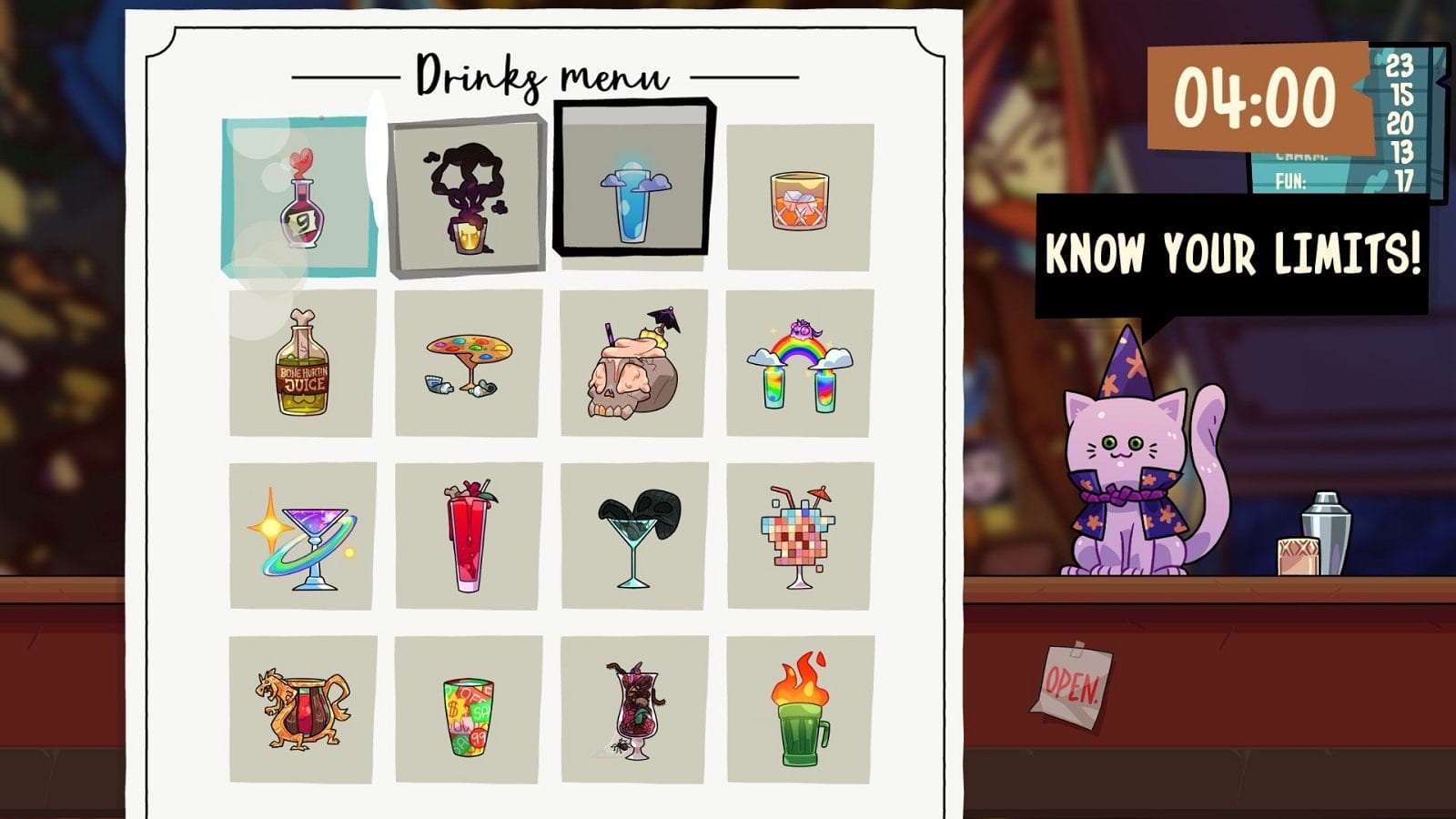 Alcohol and fire — the perfect combination.

Monster Camp takes note of your interactions and places you in situations with your suspected love interests. As it narrows down the targets for your cupid’s arrow, you’ll be faced with more and more absurd circumstances. It’s in these events where characters overwhelm you with their antics and their charm. They’re all equally unique, loveable, and wholly terrifying. Each character is an eccentric caricature, but complex enough to make choosing the right dialogue option enough of a challenge. Your own morbid curiosity just keeps you coming back.

I certainly did, and will continue to do so. With two dozen secret endings, more than 300 events, and well over 1000 outcomes, there’s always something new to see and laugh at. When winning over monsters becomes child’s play, the secret endings ask you to take new, creative approaches and try out new items or drinks. For the completionists, Monster Camp is a puzzle that keeps on giving. Reaching milestones grants players new cocktails for extra replayability. 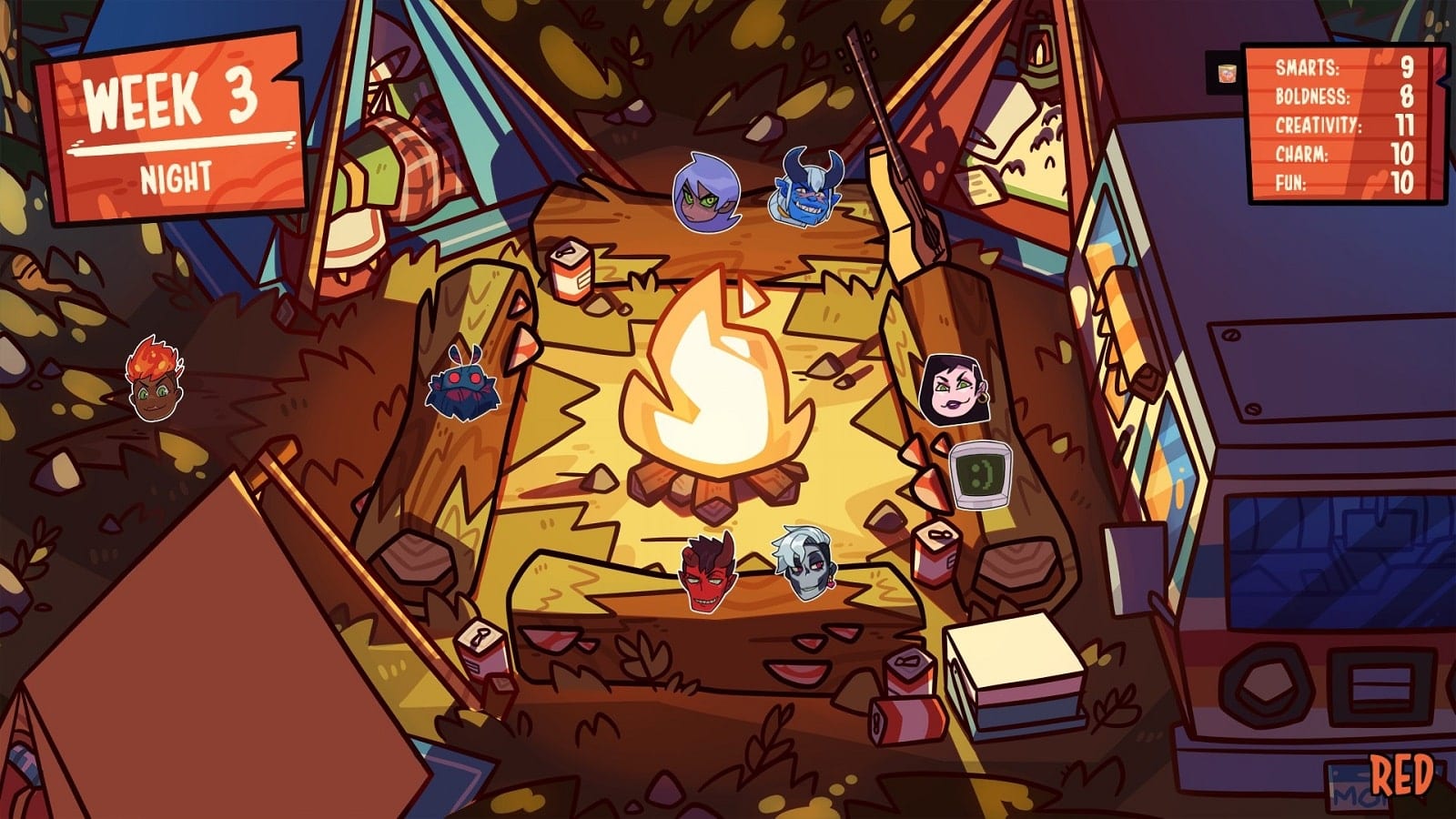 Sitting with the cool kids.

It’s easy to see Monster Camp as nothing more than a reskin of the original. It features an identical gameplay loop, retrofitted with some shiny new parts that perform the same functions. The introduction of cocktails is the most riveting change, and lends itself to new emergent gameplay outcomes, despite its rather nonsensical implementation. If you weren’t a fan of Monster Prom, it stands to reason that its sequel won’t tickle your fancy either.

Monster Camp is the latest in what will undoubtedly be a dominant series in the dating sim space. The formula is still fresh enough that fans will have little to complain about, but if the series is to continue into the future, its trademark comedy might not be enough. For now, the game is just as hilarious, relaxing, and as mesmerizing on the twentieth playthrough as it was on the first.

With its wealth of content and comedy, Monster Camp establishes itself as the year’s premier dating sim. Fans of the original will feel right at home; the gameplay remains relatively untouched, save for a number of adjustments.

A self-deprecating, overly sarcastic pair of glasses that occasionally possesses a human host in order to partake in the delightful process of playing video games, then immediately complaining about them. When he is not playing games (a rare occurrence), he can be found either writing about things that no one cares about, or haunting the quiet streets of his Canadian suburb.
Related Articles: Indies, Monster Prom 2: Monster Camp
Share
Tweet
Share
Submit