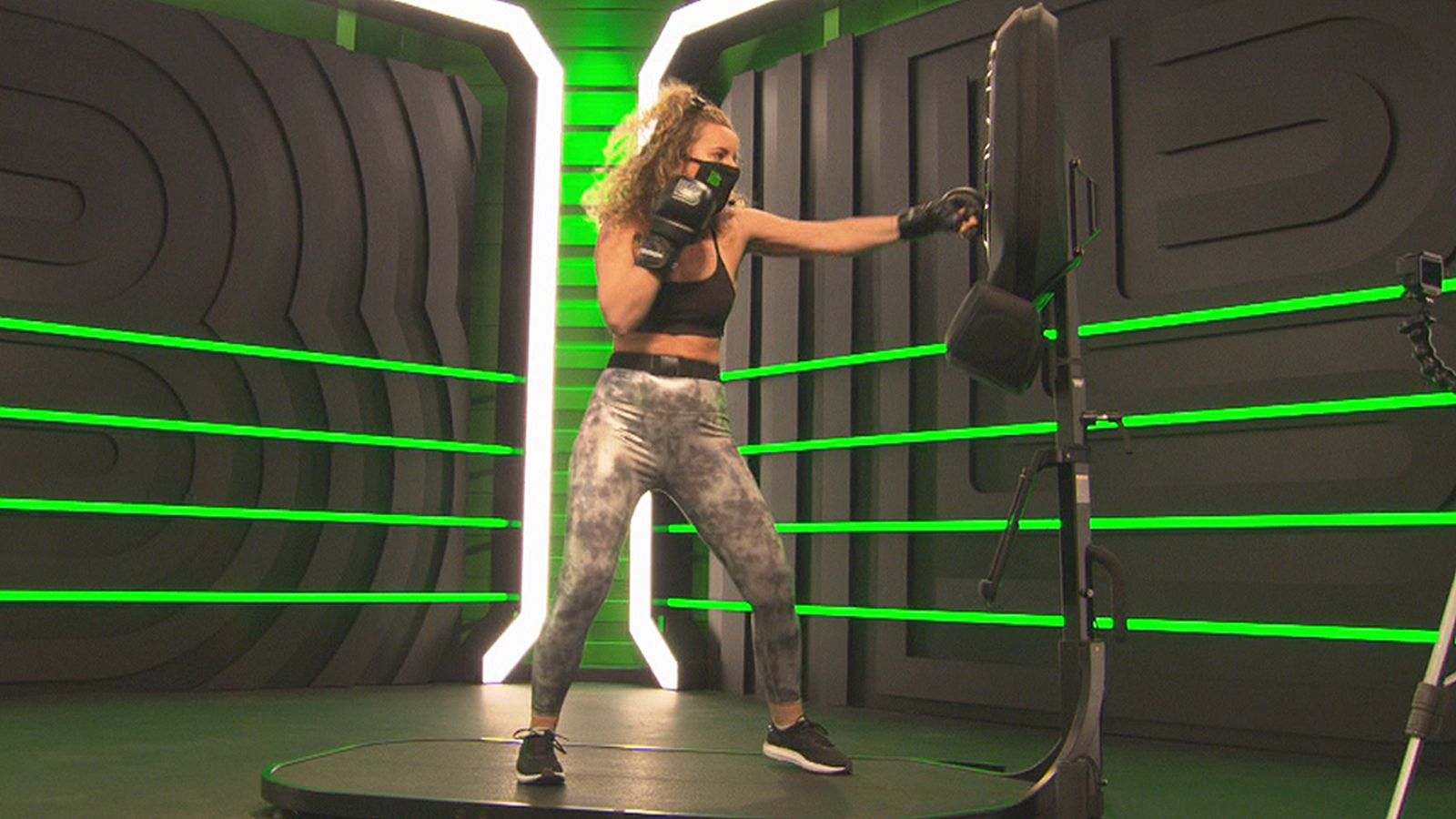 Texas just experienced a “once in a lifetime” cold snap with snow, ice, and power outages for the second year in a row, and that’s got us all thinking about summer and being outside where it’s warm. Unfortunately we’ve all also been sitting on our butts, gaining weight. Roughly 40% of people have gained more than 2.5 lbs, with 27% gaining less than 12.5 pounds, 10% gaining more than 12.5 pounds, and 2% gaining over 27.5 pounds, according to Harvard Health. Oof! Until we can all get back into the gym safely, a lot of folks have turned to at-home solutions for their workouts. A company called Liteboxer has been working on bringing boxing workouts into our living rooms, with a free-standing or mounted solution. Well, those also cost between $1500 and $1800 – more than most have rattling around their couch cushions. That’s where virtual reality comes in. Let’s pop on our Oculus Quest 2 (because I refuse to call it Meta) and check out Liteboxer VR.

Whether you are working with the physical Liteboxer, or the virtual one, there’s a monthly fee for training. This fee connects you with classes made by world-class trainers educated in strength training, boxing, and cardio conditioning to help you get in shape. Games like Box VR (part of FitXR’s overall workout umbrella), Supernatural VR, and real-world ones like FitOn and Peloton (ok, maybe the latter is a bad example) all have subscription models, so this concept of instructor-built classes isn’t new – the cash flow each month helps all of them develop new content, rather than stagnating with a one-and-done approach. So, what’s Lightboxer VR have on offer that the others don’t?

At the time of writing there are over 100 workouts available in nearly a dozen music categories. Every day I’ve checked there has been several more to choose from, so it’s clear that the Liteboxer team is using the subscription dollars wisely. Like every boxing VR title, the app tracks your accuracy, timing, and power. Completing a workout for the first time sets a personal record, or PR, allowing you to work against your previous best. There’s also a leaderboard which lets you compete against your friends and other randoms that are also boxing their way to a better body – whatever it takes to keep you motivated.

Just like the physical Liteboxer, you’ll be presented with six circles, each with a small line cutting through them. These lines “fill up”, heading towards the smaller circle to indicate the timing. Not unlike Rockband, Liteboxer will keep track of your good hits with a ratio score, as well as your streaks. How hard you punch is tracked, and all of it adds up to an overall score for the workout.

I’ve spent approaching 3000 hours in virtual reality on Steam, and probably half of that again on the Oculus family of VR headsets. That’s a long time to be hearing the same techno beats for workouts over and over. Bad music can ruin a rhythm boxing game as it just sucks the motivation out of you. This is precisely what has happened to me over time with other VR boxing titles as their catalog of music never changes. Liteboxer has a partnership with Universal Music Group, an amalgamation of more than a dozen labels like Virgin, Capital, Motown, Geffen, Abbey Road, Def Jam, EMI, Polygram, Republic, Verve, and many, many more. That means they Liteboxer has access to thousands of songs to keep your heart pumping. The catalog is still building, but already there are well over 100 songs to choose from. These songs are refreshed daily, so you’ll always have the latest tracks to keep you moving. If you like a specific track you can even curate your own playlists for a repeat performance. If you are wondering why you’d want to pay a subscription for a title like this, you’ll appreciate not having to play the same dozen songs over and over.

So what happens if you don’t subscribe to Liteboxer VR? Inside the track list you’ll find a long list of tracks labeled “Premium” and then quite a few that aren’t. How this evolves over time is anyone’s guess, but thus far it’s a pretty healthy amount of non-premium songs. I would imagine we’ll see a similar thing happen with exclusive workouts, though I don’t see any at the time of writing. Some cool celebrity workouts such as MMA fighters or maybe even a visit from the King of Tae Bo, Billy Blanks, could be fun.

If you’ve got a physical Liteboxer, the subscription for that device will set you back $29 a month, with the VR workouts included for that price. If you are only jumping into Liteboxer VR, that’ll cost you $18.99 a month. There are discounts available if you subscribe for a longer period of time, and a 30 day free trial is available for you to try it out for yourself, so the barrier to entry is zero – you are free to try it for yourself.

You aren’t spoiled for choice for games where you punch at orbs coming your way, and all of them I’m aware of have something in common – you’ll be using your controller to do it. When you are boxing, your hands will end up sweaty, and holding onto a plastic wand or controller only exacerbates the problem. Well, the outside-in tracking (cameras on the outside of the HMD to track your hands and fingers) in the Oculus Quest 2 solves this problem entirely by allowing you to shed the controllers entirely. Tracking your hands perfectly, you can press buttons, select songs, and punch targets without the need to touch a controller at all. It’s a HUGE improvement as it does a great job of making you feel like you are boxing instead of playing a game. Kudos to developers for successfully working through what must have been a challenge to ensure the game is as accurate as possible.

I really enjoy the trainers in Liteboxer. There are a variety of entirely-too-fit people that’ll coach you through your boxing sequence. While they aren’t on the screen the entire time, they do a great job of demonstrating the techniques. They are also chipper and clearly seem to love what they do.

One complaint I have with Liteboxer VR, and frankly it’s an easy fix, is the lack of a preview on songs. A new track from a band I’ve not heard of will pop up, but there’s no way I’ve found to preview the song other than to jump in and get punching. Letting me gesture over tracks so I can hear what I’m getting into would be a great feature addition.

The only other complaint I have is also easily remedied. You’ll often tackle a workout with multiple songs that have a break in the middle to introduce a new punching sequence. If you’ve got a killer streak going, you can probably kiss it goodbye as the coach instructions count against you if you miss. There’s no reason why these should count against you as you are learning a new pattern and you aren’t in a song quite yet. C’mon Liteboxer team – disable that, will ya?

I can already see Liteboxer VR becoming a regular routine to supplement other bodyweight exercises. With a wide variety of music to choose from, and new exercises and tracks being added daily, it just might peel off some of that COVID weight we’ve all been dreading. Time to get off the couch folks…summer is right around the corner.

As is often the case for live service games, what we reviewed today is the launch product and is likely to evolve over time. As such, realize that this title’s features (and soundtrack) is likely to have expanded greatly if you read this review a year from now. Still – what’s on offer at launch is very much worth an ongoing subscription, and best of all you don’t have to take my word for it – pop over to the Oculus store and sweat it out for yourself.

Ron Burke is the Editor in Chief for Gaming Trend. Currently living in Fort Worth, Texas, Ron is an old-school gamer who enjoys CRPGs, action/adventure, platformers, music games, and has recently gotten into tabletop gaming. Ron is also a fourth degree black belt, with a Master's rank in Matsumura Seito Shōrin-ryū, Moo Duk Kwan Tang Soo Do, Universal Tang Soo Do Alliance, and International Tang Soo Do Federation. He also holds ranks in several other styles in his search to be a well-rounded fighter. Ron has been married to Gaming Trend Editor, Laura Burke, for 21 years. They have three dogs - Pazuzu (Irish Terrier), Atë, and Calliope (both Australian Kelpie/Pit Bull mixes).
Related Articles: Liteboxer VR, VR
Share
Tweet
Share
Submit