I, like many, wasn’t sure what the heck I saw when Bugsnax was announced at the June PlayStation Showcase. I mean, from the ridiculously catchy song I was able to pick up a little bit. These creatures were kinda bugs, yet kinda snacks. It all seemed quite outlandish to be honest, but given Young Horses is the developer for Octodad I just kinda rolled with it, and then the game continued to grow on me. The closer and closer it got, the more hyped I was to find out what Bugsnax actually is. Well, here we are, the game is officially available November 12th, and we are finally “talkin’ bout Bugsnax”.

So what is Bugsnax? Let me start at the beginning. You’re a Grumpus, which is essentially a fuzzy, domesticated muppet creature, and you’re also a reporter. Your reputation has taken a bit of a hit as of recent, but you’re still going after big crazy stories. Well, an explorer named Lizbert Megafig has discovered an island full of a new species, Bugsnax! Your editor thinks it’s too preposterous to chase, but it’ll get you out of her way, so it’s off to Snaktooth Island to learn the mysterious secrets of the Bugsnax. Once you arrive (by falling out of your airship thanks to a flying pizza) you come across the interim mayor, Filbo Fiddlepie (yes, all their names are this ridiculous), of Snaxburg – the settlement Lizbert has created. Everyone has left the town and Lizbert has vanished, so it’s up to you to find the settlers, bring them all back to town, and find Lizbert.

Given that this is a narrative game I don’t want to give away too much, but rest assured the story is both weird and heartwarming. It’s extremely goofy, and I can at least tell you there is an explanation as to why Grumpuses limbs change to strawberries and such when they eat Bugsnax. Most of what you do is encounter each character, and try to find out what it’s going to take in order to get them back to town. Each time you get a few back, more of the story comes together, you find clues about Lizbert, and new areas open so you can continue bringing the Grumpuses back. The only issue I have with this is there is a lot of backtracking from area to area. It just gets tiresome, especially when so many developers have figured out inventive ways to keep you from doing that.

The last thing I want to bring up about the story is the way the game ends is somewhat counter to how the game feels. While it is set up, the ending happens a bit too fast and the tone is almost too strange. Was it a surprise? Not completely, but the shift from whimsical to serious feels a little off.

While the end is somewhat bizarre, everything that happens before that is great! Getting to meet all of these Grumpuses is definitely one of the highlights of the game. Part of this is due to the castings. I mean, can you expect anything but great performances when you have the likes of Yuri Lowenthal (Marvel’s Spider-Man), Debra Wilson (Jedi: Fallen Order), Fred Tatasciore (Overwatch), and more? Besides that, you can really tell Young Horses went out of their way to give each one of these characters their own personality, which is only amplified by the voice actors. Each Grumpus is unique, and Young Horses does a phenomenal job of showing that. 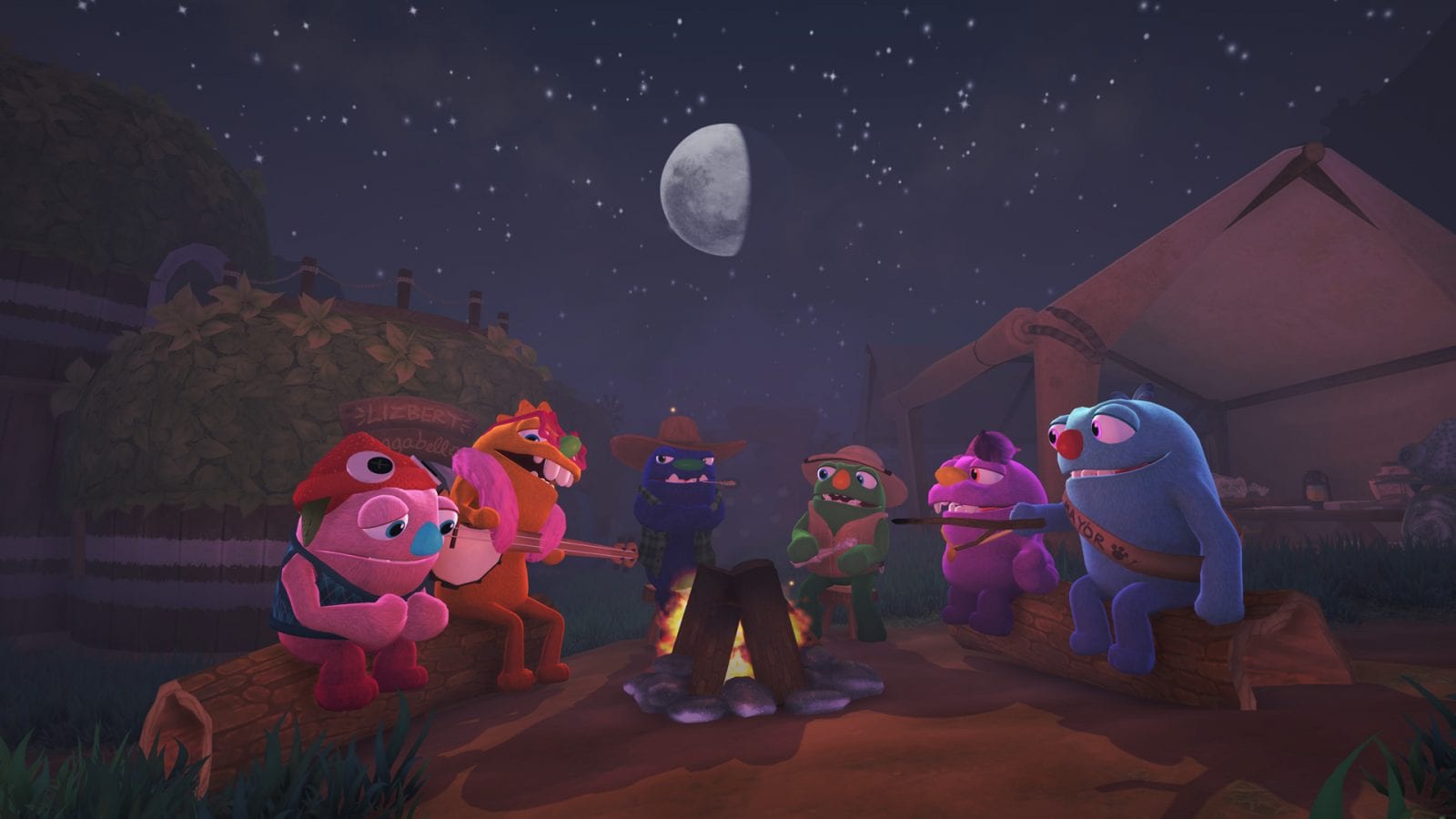 Now obviously we need to get to the reason you’re reading this review, the Bugsnax themselves. Each area has plenty of these buggers, and you’ll want to keep a tab on what is where in case someone asks you for a specific Bugsnax (or is Bugsnak or Bugsnack the singular?), which they always do, and occasionally you have to go find it. Each Bugsnax is reminiscent of a Pokémon: there are a bunch of different ones, I’m supposed to catch them, and they even mutter their names incessantly. While I’m going to sound like a Bugsnax hipster, my favorite one has got to be the Strabby. It’s just so cute.

While the main part of the narrative is getting the Grumpuses back, the main part of the gameplay is catching the Bugsnax. You start with a simple trap that you drop, activate to catch them, and then pick up before the timer runs out. The coolest part of Bugsnax is this gameplay loop of figuring out just how each Bugsnax can be caught. You continue to pick up different tools as you progress through the game, and the depth of your gear is really impressive.

Maybe just as impressive as the gear depth is the depth of learning how to catch each Bugsnax. By the end of the game, I was learning to use the tools together, along with the sauce you get which functions as a bait. The game doesn’t really do much in telling you how to trap Bugsnax, so one of the best tools to use is the one you start with, the Snaxscope camera. A simple click of the stick brings it up, and after taking a picture it gives you a breakdown of the Bugsnax as well as their likes and dislikes, which you can use to your advantage.

For instance, I remember catching both a Stewdler and a Chillynilly both because I worked it all together. The Chillynilly is a flying Bugsnax, is too cold to touch, and you’ll ice over even if you manage to knock it out of the sky. On the opposite side, the Stewdler is a ground Bugsnax, is on fire, and will as such catch you on fire. I used my Snaxscope to figure out what they liked, then used my Trip Shot to shoot a wire out that the Chillynilly ran into and stunned itself on. I then took out my Sauce Slinger (a sling) and shot it with hot sauce, which the Stewdler loves, and this caused it to run at the Chillynilly, catch it on fire, and as the Stewdler touched the Chillynilly it also iced over. In those moments before the effects wore off I was able to run up and grab them both with my trusty net and add them to my inventory! Yes, it can be complex catching Bugsnax, but the gameplay is rewarding and you have fun doing it over and over. 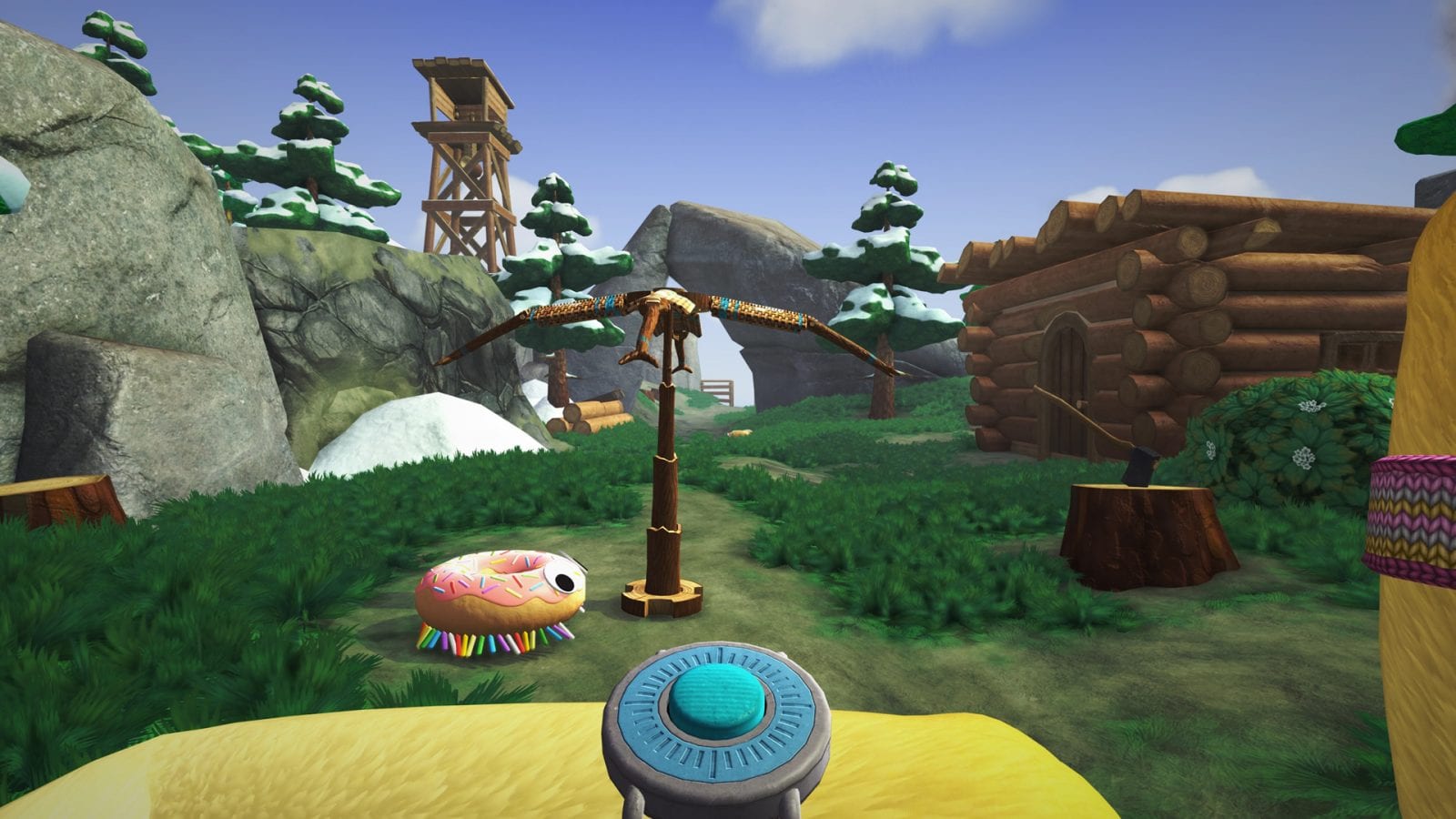 Another tool that is super useful? Your journal. So many RPGs have too many menus for me to run through or confusing button combinations to get to specific things, but not the Bugsnax journal. It conveniently houses the map, inventory, bug encyclopedia, character dossiers, and clues to find Elizabeth and does it by simply turning pages. The quest log inside it is also very easy to use, housing all your quests in one spot and giving you the ability to pin the one you’re on. The little things matter and Bugsnax definitely does this right.

Bugsnax is an odd combination of Pokémon, a Cabela’s hunting game, and Octodad. It’s got a lot going for it in the fun gameplay, as well as a wonderful island filled with incredible creatures to discover. I do think the ending doesn’t necessarily fit, and the backtracking is annoying, but it doesn’t make the game unenjoyable. If you want the weirdest game of 2020 that's unusually entertaining, then pick up Bugsnax. Now if you’ll excuse me, the Kero Kero Bonito song is stuck in my head again.

David Burdette is a gamer/writer/content creator from TN and Lead Editor for Gaming Trend. He loves Playstation, Star Wars, Marvel, and many other fandoms. He also plays way too much Call Of Duty. You can chat with him on Twitter @SplitEnd89.
Related Articles: Bugsnax
Share
Tweet
Share
Submit