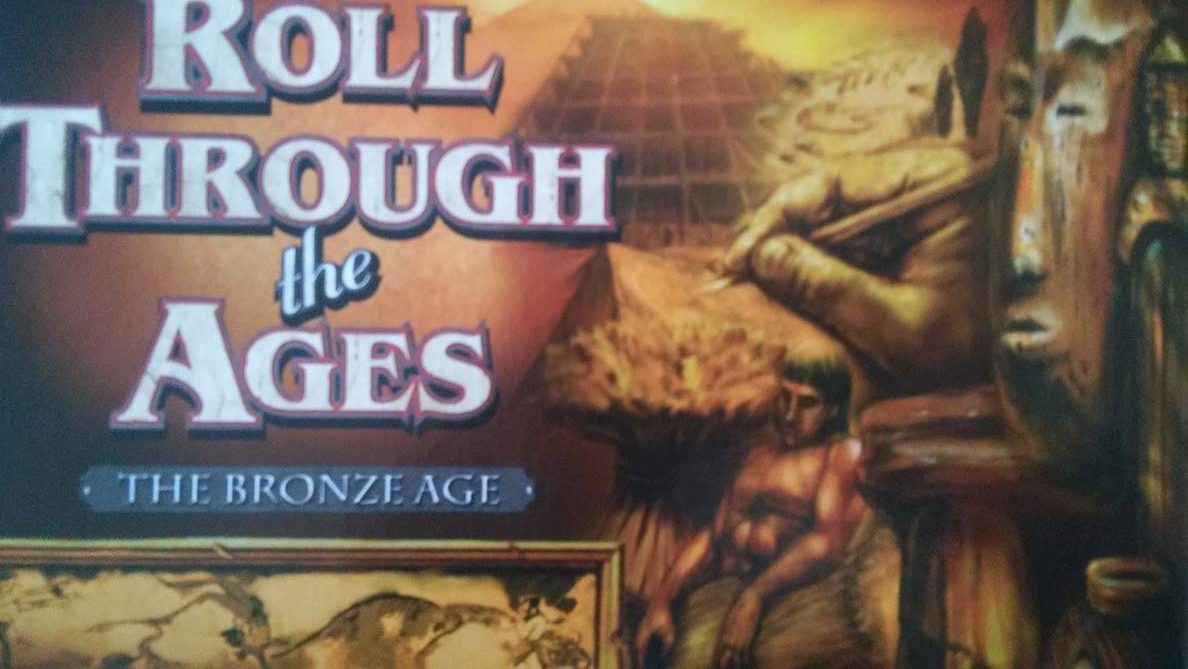 Civilizations take generations to rise out of the dust, fighting through famine, disease, and warfare in order  to help mankind ascend. Roll Through the Ages: the Bronze Age promises to gives you every one of these challenges and triumphs in under an hour in fine form.

You and your companions will be the leaders of burgeoning civilizations eking out a living as you build your kingdoms. You will be able to build monuments, extra cities, and technological advancements while you combat disastrous fate and the ever looming threat of starvation. While gamers may find this a well tried refrain, Roll Through the Ages presents itself with a fresh take on resources and actions. Each player begins with a thick wooden player board with spaces for pegs and a sheet of paper. You use the board to keep track of resources you will spend keeping your cities alive and building settlements and the paper for points scored and objectives or upgrades built. The number of sheets that come with the game is astounding. I was put off by the concept of a limited number of plays before you would have to buy new ones, but this massive booklet will more than satisfy even a zealous player.

At the outset everyone has three dice, referred to as cities, of which you can build more throughout the game. These dice are made with heavy wood and have large, easy to read symbols that are incredibly durable. Each player takes turns  rolling these dice and, after one optional reroll, takes the effect of each of them. These effects can grant resources for upgrades, food to maintain cities, workers to build monuments and cities, or disasters that can derail you or your opponents. While there are only enough dice for one person to roll at a time, the pace is fast and the mechanics are almost effortless to wrap your head around. The choices are satisfyingly deep but without forcing you stop the game and calculate options before moving ahead.

There are many things to balance, such as  ensuring your cities do not starve (which builds up negative points,) gaining funds to secure crucial new abilities, and the brute force work of building new cities and monuments. While you need to build up an engine to make yourself more effective, you must also keep your eye on the true key to victory: monuments. These are the main source of points in Roll Through the Ages, and only one player can build each monument. You have to keep track of other players’ goals and abilities as well as your own priorities to come out ahead. The game ends when every monument is built, so a constant pressure weighs on you as you make your decisions.

Most players would be dissuaded by the luck based elements, but Roll Through the Ages uses them to excellent effect. The possible swings in power from turn to turn are fairly minimal, and managing the results (helped especially by the ability to reroll) give you most of the culpability for success or victory. At the same time, luck keeps the game from becoming a stale walk through the same successful strategies. You are never completely stalled out or granted a victory by a single roll of the die, but everyone must be on their toes at all times to prepare for the future. In that respect, Roll Through the Ages is surprisingly effective at capturing the feeling of building an empire: you rely on planning almost as much as twists of fate while the presence of your neighbors looms in the distance.

The sheets, of which there are many, satisfyingly display the information you need without overwhelming

My complaints against the game are few but notable. Resources build up exponentially and each resource type must be spent all at once. Thus, you have an intriguing challenge of trying to build your resources up but not overextend and become wasteful. That said, the only difference between the resource types is how they build up numerically. (Weaponry jumps to fifteen points in two steps go while wood takes five to get to the same place.) However, there is nothing else to differentiate them, and you have to keep track of the numbers constantly in your head. Perhaps conceptually, military technology is more valuable to a society, but I would have appreciated another nod to the differences; for example, point values at the end or new abilities based off of specific resources. There is also some awkward math that slows things down at times. Each coin you roll is worth seven resources for buying new abilities while resources can range from three to thirty with awkward jumps in between. I am sure the math works out best for the designers, but as a player it caused confusion.

I also wish there were more ways for players to interact with one another. As it is, there is nothing for you to do on another player’s turn than watch, and maybe react to a disaster over which they have no control. The monument building forces you to pick and choose where you will play but that means players affect one another only indirectly.

There are few games that are as short and as satisfying, despite these faults. Roll Through the Ages is well worth a few playthroughs, though it could never be compelling enough to make a night out of. The simplicity that is its greatest advantage also keeps it from having any true depth, but the place that it inhabits will keep me coming back time after time.

Roll Through the Ages: the Bronze Age

Roll Through the Ages

Roll Through the Ages is a small but satisfying civilization builder like few I have experienced. The dice rolling guarantee it will be fresh after every play, and it manages to have a mixture of depth and accessibility that make it ideal for many types of players.

John Farrell is a legal aid attorney specializing in domestic violence, living in West Chester Pennsylvania. You can listen to him travel the weird west as Carrie A. Nation in the Joker's Wild podcast at: https://jokerswildpodcast.weebly.com/
Related Articles: Roll Through the Ages, Tabletop
Share
Tweet
Share
Submit