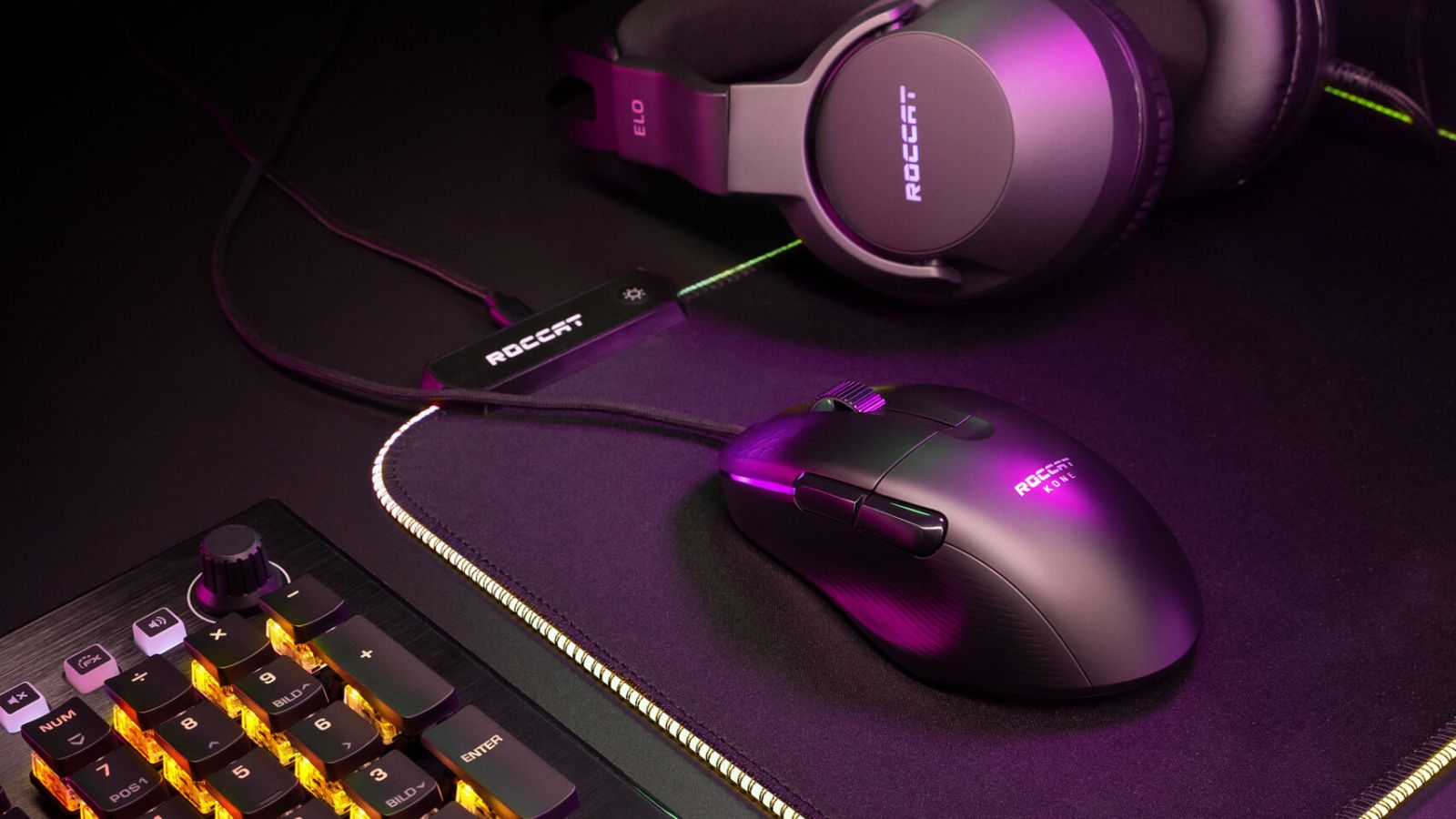 If you play twitch skill based shooters, there’s a good chance you are using a mouse with a cord. Roccat wants to change all that. Could the Roccat Kone Pro Air be the mouse that gets me to move on from my Apuri and Burst Pro combo and to something a little less tethered? Let’s crack it open and find out.

Unboxing the device, there’s a lot of engineering that goes into this little beast, but first and foremost we need to talk about just how light this mouse is. At just 75 grams, but without resorting to the hollow honeycomb body style, Roccat struck a great balance between just light enough and too light. While it doesn’t support changeable weights for those who like a little more or less, the default weight is precisely where I would have put it anyway.

The Kone Pro Air has four buttons, with a profile button underneath and a ridged aluminum scroll wheel. The scroll wheel is black brushed aluminum, meaning that even on a long lifetime you won’t have the rubberized surface start to come apart. The two thumb buttons are positioned high and midline to the body of the mouse, just above the lightly-textured thumb rest, offering up the usual reprogrammable uses like forward and back while web surfing or melee and the like in games.

The primary left and right mouse buttons use Roccat’s Titan switches. If you are a switch snob like me, the closest approximation to the Titan would be the Cherry MX Brown. That said, the Titan switch cuts the actuation down by an additional 10%, activating at 1.8mm rather than Cherry’s 2mm. It also hits bottom at 3.6mm instead of 4mm. Can you feel the difference between the two? Not likely unless you compete at a high level, but having used Titan switches for several years at this point you can’t argue with the reliability. Better still, they are quiet on top of everything else.

Powering the Kone Pro Air is a 19,000 DPI optical sensor that Roccat is calling “Owl Eye”. Not for nothing, but owls are farsighted and can’t focus on objects that are too close — ironic in this context as the 19k DPI sensor focuses hard on the immediate surface it’s resting on. Kidding aside, in over two weeks of constant use for precision work and gaming I never saw the cursor jump or lose tracking. That’s an impressive feat given just how long this mouse can hold a charge. 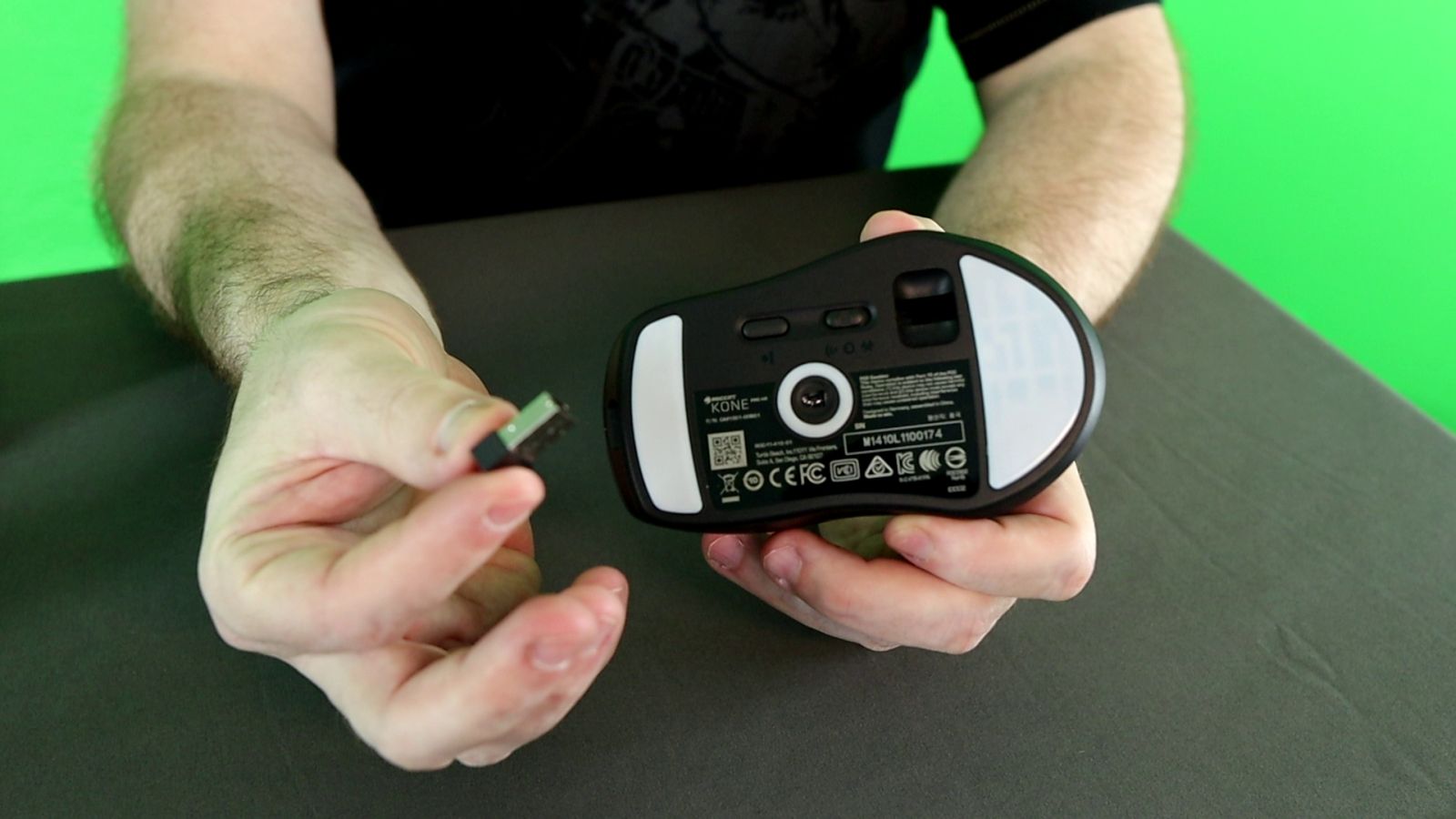 I’ve used a lot of WiFi based mice recently and frankly I’m tired of fighting with them. I’ve been using a competitor’s mouse with my laptop and the thing will lose connection being less than 8 inches away. Thankfully that’s not only not been a problem with the Kone, but I’ve been able to use it at over 10 feet away without a problem using the Bluetooth mode. It’s perfect when I’m gaming in the front room. I’m not sure what scenario you’d want to use the WiFi setting after experiencing the range on the Bluetooth one, but hey — it’s an option if you don’t have Bluetooth on your motherboard or device, I suppose.

Underneath the mouse lies two large PTFE glides (Polytetrafluoroethylene — better known as “Teflon”), as well as a circular glide around the optical sensor, just like the Roccat Burst Pro. Having used the Burst Pro since October of last year, I can honestly say that I’ve never had a hitch or any hiccups where I felt like the mouse wasn’t responsive. The same can be said of the Kone Pro Air. When doing precision work, the glides do a great job of translating small movements to the screen — crucial when you are doing editing work a frame at a time, or when landing the perfect shot behind a sniper rifle in Sniper Ghost Warrior Contracts.

Battery life is always a concern when it comes to wireless devices, and even more so when it comes to mice. There’s little worse than having your hot streak come to an ignominious end thanks to the mouse giving up the ghost. The Roccat team claims 100 hours of battery life, and given that I’ve not charged the device in two weeks it seems like it delivers on that promise. For that kind of battery life I’d expect the mouse to be heavier — guess recent battery tech advances are finally paying off. To charge the device, the device has a soft braided USB-C cable that connects at the front of the mouse for rapid charging. The mouse also has a small recessed notch that lets you tuck the USB connector into the body should you want to take it with you, or just keep the dongle safe while you are using the Kone Pro Air via Bluetooth.

If you’ve read my hardware reviews in the past, you know I’m a stickler for warranties. Too many devices are saddled with 90 day warranties, or at best a year. Roccat delivers the Kona Pro Air with two years of warranty, ensuring your investment stays safe. So let’s talk about that investment.

The Kone Pro Air will set you back $129. That’s pretty stiff, to be sure, but there’s no denying that the engineering that has gone into this peripheral is impressive. I try to approach my peripheral purchases with a “buy it once” mentality as devices like mice, keyboards, speakers, and monitors affect literally every interaction with my PC — spending a little extra to get a little extra.

There is one thing that I find disappointing on the Kone Pro Air — more accurately something that is missing — a DPI switch. Unlike previous Roccat mice I’ve used, the Kone Pro Air doesn’t have a dedicated DPI toggle on top, instead relying on the profiles you’ll have to define in software. This means you can’t easily switch DPI profiles without flipping the device over to press the button. This feels like a step backwards on a mouse that takes so many steps forward.

It’s a judgement call if you can make the stretch for your primary input device, but for a mouse that never loses connection and can hold a charge for 100 hours, I’m a believer. I just wish Roccat hadn’t cut the dedicated DPI switch. Less buttons is almost always the wrong answer.

Ron Burke is the Editor in Chief for Gaming Trend. Currently living in Fort Worth, Texas, Ron is an old-school gamer who enjoys CRPGs, action/adventure, platformers, music games, and has recently gotten into tabletop gaming. Ron is also a fourth degree black belt, with a Master's rank in Matsumura Seito Shōrin-ryū, Moo Duk Kwan Tang Soo Do, Universal Tang Soo Do Alliance, and International Tang Soo Do Federation. He also holds ranks in several other styles in his search to be a well-rounded fighter. Ron has been married to Gaming Trend Editor, Laura Burke, for 21 years. They have three dogs - Pazuzu (Irish Terrier), Atë, and Calliope (both Australian Kelpie/Pit Bull mixes).
Related Articles: Hardware, Kone Pro Air
Share
Tweet
Share
Submit