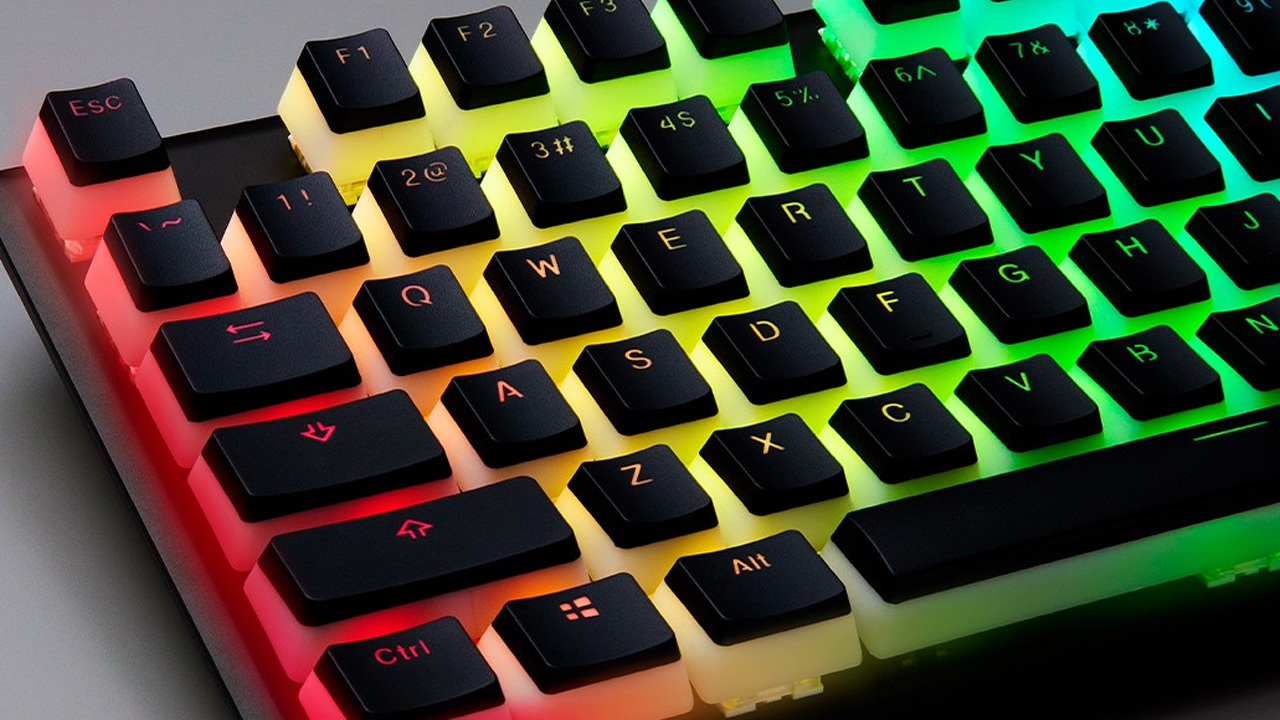 I really enjoy HyperX’s mechanical keyboards (as you can see in our reviews of the 2017 Alloy Elite here and the updated 2018 model here) — the Cherry red switches are highly responsive and the overall construction is rock solid. The removable keys (seen the video below) are easy to replace as you see fit, and now HyperX is upping their RGB game with a new set of keycaps. Let’s take a look at the HyperX Double Shot PBT keycaps (and what all that means).

Before we get into the review, let’s talk about the terms. First and foremost, “double shot” isn’t a marketing term, but actually refers to the manufacturing process by which these keys are made. Double shot manufacturing is when two plastics are layered and molded into one another, resulting in a key with an integral property — in this case, the printing on the keys. Unlike cheaper keycaps with letters printed on the surface, a double shot keycap will never lose its letters. On this set of keycaps, it’s immediately obvious as you can see in this picture below: 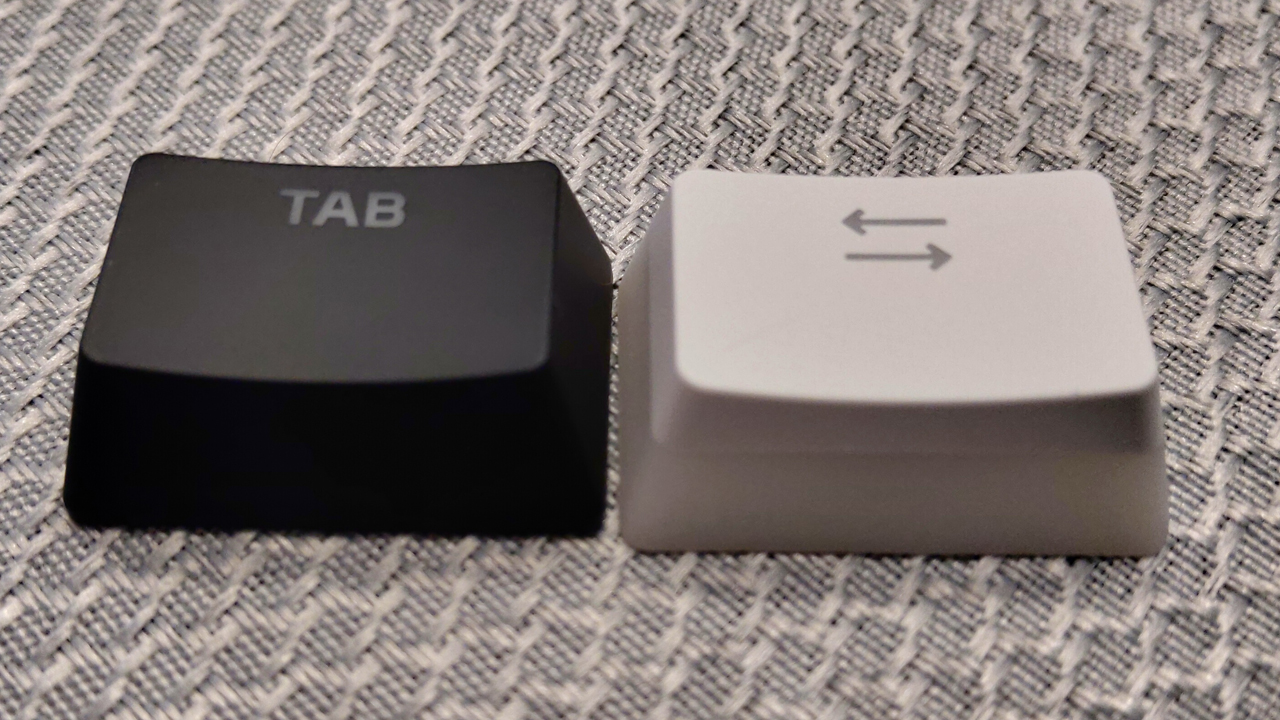 You can see the “double shot” key process in action.

The second part of the name of this key pack is “PBT”. PBT stands for Polybutylene Terephthalate — a hardened plastic with a few unique properties. PBT is a textured plastic, unlike most stock keyboards, that has a hardening material to prevent wear and tear, as well as a solid resistance to oils from your skin. If you’ve still got an old cheap Dell keyboard you’ve used for a while, I’m guessing you can see exactly where your thumb rests on the spacebar — PBT is meant to prevent, or at least slow down that phenomenon. 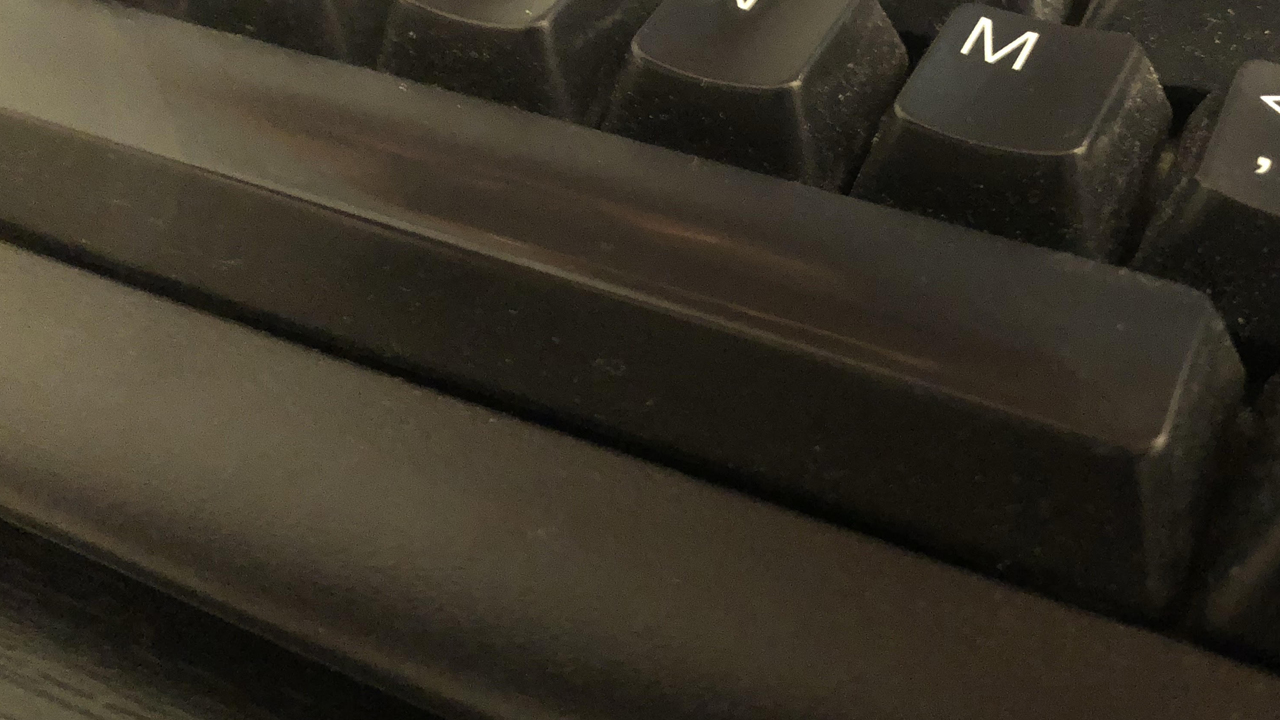 We’ve all seen this shiny phenomenon on cheaper keyboards.

There is another type of non-stock key type called ABS. ABS stands for Acrylonitrile Butadiene Styrene. These are a single molded plastic key, and are often cheaper as it’s a single plastic injection process. Your “cheap” keyboards are almost always ABS, but truth be told there’s no reason to settle for less — a full replacement set of ABS keys is about $20, whereas this set from HyperX are just $24.99. (though I’ve already seen them on sale for $19.99)

Beyond the construction, there’s also a marked auditory difference between ABS and PBT keys. You might describe the keys from the 2017 and 2018 Alloy Elite and FPS pro as “clacky” as they tend to make a bit of a racket when you type (it’s a board for gaming — not doing a ton of typing, so I never really paid much attention to it), whereas a typical ABS board’s lightweight keys are certainly quieter (though still clicky) by comparison. These new keycaps are definitely quieter than the stock keys on the earlier boards from HyperX, and even quieter than the 2019 models. You can hear it for yourself in the video below:

As I mentioned in my overview video, I like to further noise buffer the keys with rubber o-rings like these. It doesn’t make the keys silent by any stretch, but it does make them far quieter.

The Double Shot PBT Keycaps are available white (or “pudding” as they call it) and black, I opted for the former as it’ll let the most light through from my keyboard. The keycaps ship in three vacuum-sealed flat packs as you can see in the video above, alongside an easy-to-use key puller. The difference in how much light is let through is remarkable without becoming overwhelming when in the dark. It makes the board easy to use in lowlight conditions like LAN parties, or if you keep your lights dim during the evening.

The big question around these sorts of packs are whether they are necessary. I can’t answer that for you, but I can speak for myself when I say that the additional lighting, coupled with the double shot print on the keys make them a great addition for any mechanical keyboard. The only downside is that, in the transition, some of the symbols on the stock keys were removed for these new caps. Specifically, none of the function keys show their secondary functions such as the audio controls or brightness adjustments. It’s not a terrible loss, but if you use those adjustments frequently, it could present you with a memorization challenge.

This keycap pack is an excellent augment to your HyperX keyboard. The improved PBT printing process will reduce key shine and wear, allows the keys to shine through more fully, and they are quieter to use. While the loss of the function key information is lamentable, it shouldn’t stop you from treating yourself to a fresh new look that’s sure to last a long time.

Ron Burke is the Editor in Chief for Gaming Trend. Currently living in Fort Worth, Texas, Ron is an old-school gamer who enjoys CRPGs, action/adventure, platformers, music games, and has recently gotten into tabletop gaming. Ron is also a fourth degree black belt, with a Master's rank in Matsumura Seito Shōrin-ryū, Moo Duk Kwan Tang Soo Do, Universal Tang Soo Do Alliance, and International Tang Soo Do Federation. He also holds ranks in several other styles in his search to be a well-rounded fighter. Ron has been married to Gaming Trend Editor, Laura Burke, for 21 years. They have three dogs - Pazuzu (Irish Terrier), Atë, and Calliope (both Australian Kelpie/Pit Bull mixes).
Related Articles: Hardware, HyperX Double Shot PBT Keycaps
Share
Tweet
Share
Submit