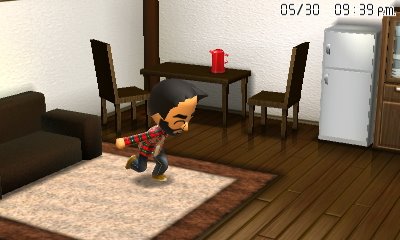 Tomodachi Life is difficult to encapsulate without actually playing it.

It’s not really a game. Like Nintendo’s other life sim Animal Crossing, Tomodachi Life is a game you pop into every now and then, interact with for a few minutes, then put down until tomorrow. But it’s actually less of a game than Animal Crossing, as you have very little control over its residents.

No, Tomodachi Life is less a game and more of an interactive toy. And what a weird, fascinating little toy it is.

Tomodachi Life lets you take the Miis you’ve created (either on your 3DS or your Wii U), and place them on a magical island where they take on a life of their own. Friends, loved ones, cartoon characters, celebrities – you can create any Mii you like, give it a personality, customize its voice, and send it off into the world to interact with all the other Miis. Tomodachi Life doesn’t really get good until your island is teeming with them, so it’s best to just fill it up with anyone and everyone you know.

Look! It’s a digital version of me! I’m an airplane!

Once you’ve got a few people roaming around, you can dig into the real meat of the game – fulfilling minor requests for each character. It’s certainly not glamorous, but giving your citizens food and items they like will level them up, granting them special items, let them learn songs or catch phrases, and more. Each Mii has a different personality, and each one will have different items that they want – some will want fancy clothes, while others want the best food you can buy.

And then you sit back, and watch them go. Occasionally you’ll play a game or two with them, but most of Tomodachi Life is about watching these virtual sea monkeys go about their business, working in stores, developing relationships, singing in concerts…

It’s kind of hard to explain, so I figure I’ll let some pictures do the talking.

Here’s a picture of my fiancée and I strolling on the beach. Yes, that’s a strawberry on her head:

Here’s the family and some friends hanging out to play the Wii U:

My daughter and I are battling each other – rap battling, that is:

A rare fish has been discovered, that just happens to look like Wired’s Chris Kohler:

My fiancée is having a pretty weird dream:

Seeing my friends and family wrapped up in these wacky moments is enormously fun, and while you rarely have direct control, Tomodachi Life is filled with tons of surprising moments.

Just don’t expect to enjoy it more than a few minutes at a time. Playing for more than maybe fifteen minutes or so gets incredibly repetitive, as you fulfill the same requests for your citizens over and over. Plus, certain events only occur at certain times of day, so you’re better off checking on how your island’s inhabitants are doing over the course of the day (or even week) rather than trying to marathon a play session. Like Animal Crossing, it’s just not built for that kind of play.

It’s also unfortunate that same-sex relationships aren’t included. It’s a strange oversight, and one that could have been easily remedied with a simple option or two. For a game that’s about simulating the wacky lives of you and your friends, it’s a shame that Tomodachi Life isn’t more inclusive of the varied lifestyles of the inhabitants of this great planet of ours.

Yeah, it’s weird. No, there’s honestly not a whole lot to do here as far as actual interactive content goes. But Tomodachi Life is consistently humorous, charming, and totally nuts, like a virtual pet on acid. And you don’t have to constantly clean up poop.

Tomodachi Life is more toy than game, but it’s an intriguing, colorful, and consistently surprising one.