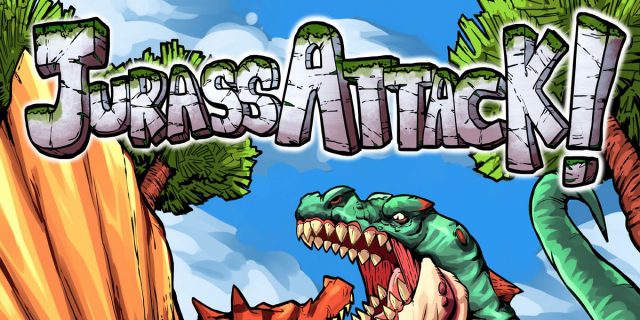 Jurassattack has all the might and brawn of an epic dinosaur showdown, but adds a layer of deep strategy that catches you by surprise. This two player brawler is as much about having the biggest dinosaur hit the hardest as it is about careful resource management and bluffing your opponent. The game is short, topping out at around fifteen minutes, but that time is filled with satisfying gameplay and memorable experiences.

Jurassattack is ostensibly a game of War with extra elements to keep it from being purely luck based. Each player grabs their deck, shuffles it, and draws five cards. You then play at least one card face down. The decks are made up of several types of dinosaurs, from tyrannosaurs to velociraptors to sarcosuchii. (There are some odd names in there, but the game is committed to using the proper names and dinosaurs from the actual Jurassic period, and I can’t in good conscience hold that against it.) You can play a single dinosaur or combine it with more of the same type. As the values of cards increase their numbers in the deck decrease, so you must be careful. After flipping your cards over you total their values, and the winner gets the opponent’s cards and puts them in their score pile. Higher value cards are worth more points, and the player with the highest point total once the decks have run out wins.

The art has an appropriate mixture of vicious and playful

The simplicity helps get you into the game, which you quickly realize has far more to offer than it first appears. Cards have small special abilities that modify the game. Pteradons have low combat value but can combine with any dinosaur, so they are a great way to bluff your opponent into wasting resources and overplaying for a low-valued group. The spinosaurus instantly wins a combat, but each deck only has one. You need to choose when to win, when to lose, and by how much. The game quickly becomes one about managing resources and reading your opponent instead of playing the highest valued card.

It is rare to get such memorable encounters from so short a game. My first playthrough I was faced with a frustrating choice near the end of the game. I estimated the points were about equal, so part of the concern was whether to end it quickly by overplaying or try to extend it for more options. My opponent, who won the previous round, played first. He put down three cards. This could mean he put down a few of the same dinosaurs which would add up to a high point value. Maybe it was a sarcosuchus which gets buffs from eggs, and extra cards to increase its power. It even could have been a tyrannosaurus rex hiding with pteradons to make it seem like a lower value hand. Not wanting to take the risk, and hoping I could get rewarded by sweeping some high value cards, I played the spinosaurus. The other player flipped his hand over to reveal three compsognathus, worth a total of three points. He had drawn out my highest resource with next to no investment.

The decks are oversized, likely in an effort to make the game feel massive in scale

Jurassattack does not guarantee these types of encounters, however. The luck of the draw can lead to more than a few rounds where you feel you don’t have many options. You also can’t do much to change the overall game. Your goal is to win as many individual hands as possible, and game strategy comes down to winning while using the fewest resources. Repeat playthroughs will give you a few great rounds and a few unsatisfying ones for a game that is overall perfectly inoffensive. Because of how small the decks are, there are only so many possible hands, though different players will react to them differently. The art style is pleasantly cartoony, which fits perfectly for a small family friendly game. The cards are oversized which makes them difficult to sleeve for those few who are interested in it.

The quick play, interesting choices, and ease of learning make this a great game for younger players with a lot to offer older gamers. Jurassattack fits in your pocket and takes a maximum of fifteen minutes, all of which it is sure to fill with some simple, satisfying fun.

Jurassattack is a two player card game that starts out effortlessly but quickly becomes a deep strategic experience. For something as short and easy to learn it is hard to get so much satisfaction.

John Farrell is a legal aid attorney specializing in domestic violence, living in West Chester Pennsylvania. You can listen to him travel the weird west as Carrie A. Nation in the Joker's Wild podcast at: https://jokerswildpodcast.weebly.com/
Related Articles: Jurassattack, Tabletop
Share
Tweet
Share
Submit