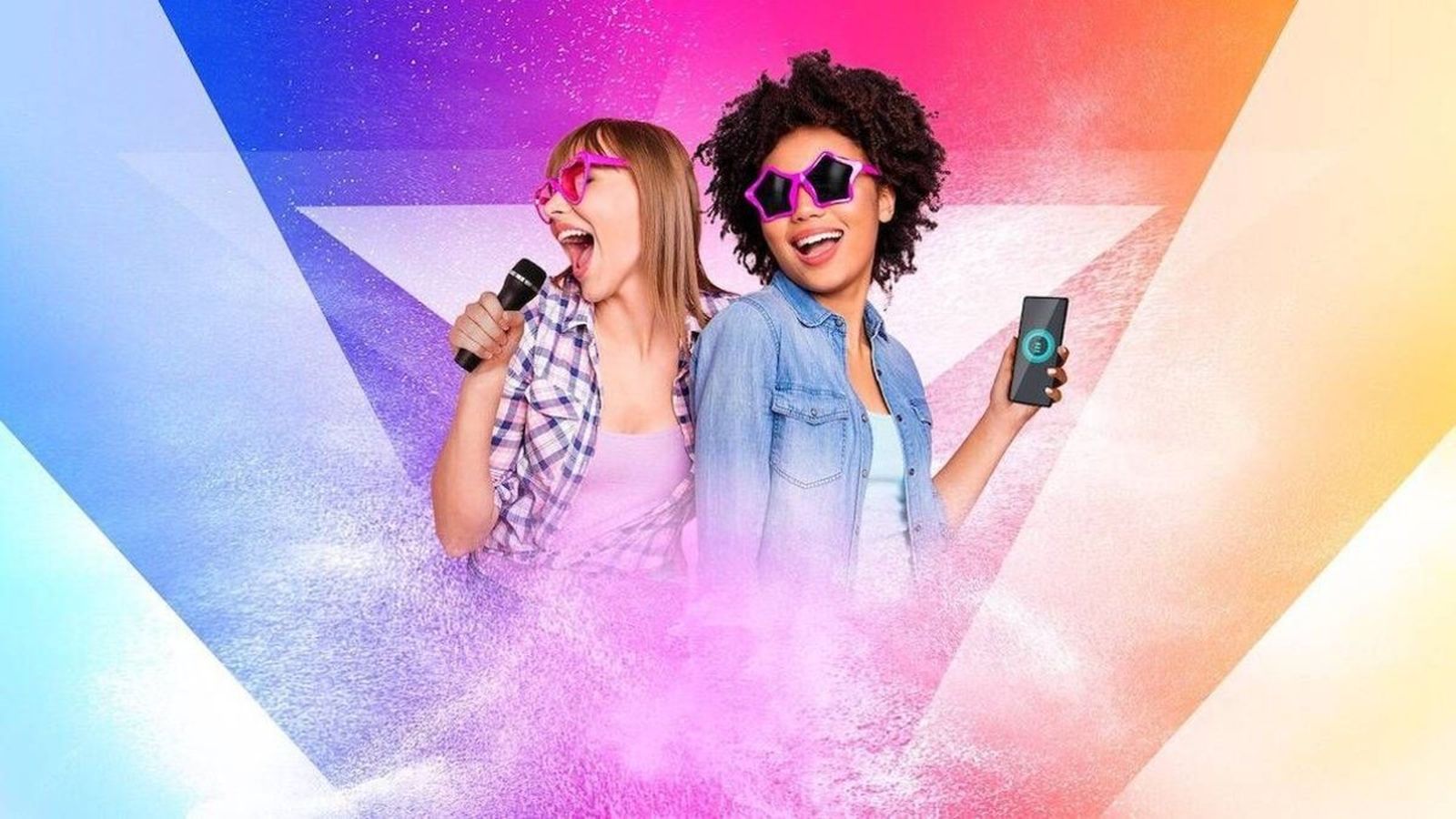 I love singing. So much, in fact, that I’ve decided to make a career out of it. While I’m waiting for that first big hit, I also love to head out to the karaoke joints to belt out tunes with my friends. Singing is my life. I’ve never played the original Let’s Sing, but when Let’s Sing 2022 popped up on my radar, I knew it’d be right up my alley. Let’s do what the title suggests and get this place humming!

Let’s Sing 2022 is essentially a karaoke sing-along game, focused on singing (naturally) along with your favorite tracks, and playing minigames. Doing your best celebrity impression and matching pitch will net you points. Do it long enough and you’ll get a streak, flub a note and you lose it. Ok, so developer Voxler isn’t breaking the mold on the note matching genre.

Let’s Sing features the music videos (remember those?) from the artists playing in the background. You’ll likely be paying attention to the note chart, but it helps keep any observers busy.. In fact, they get a karaoke track of their own to read at the bottom. I’m not sure why as the players have their note charts with lyrics, but more is more I suppose? 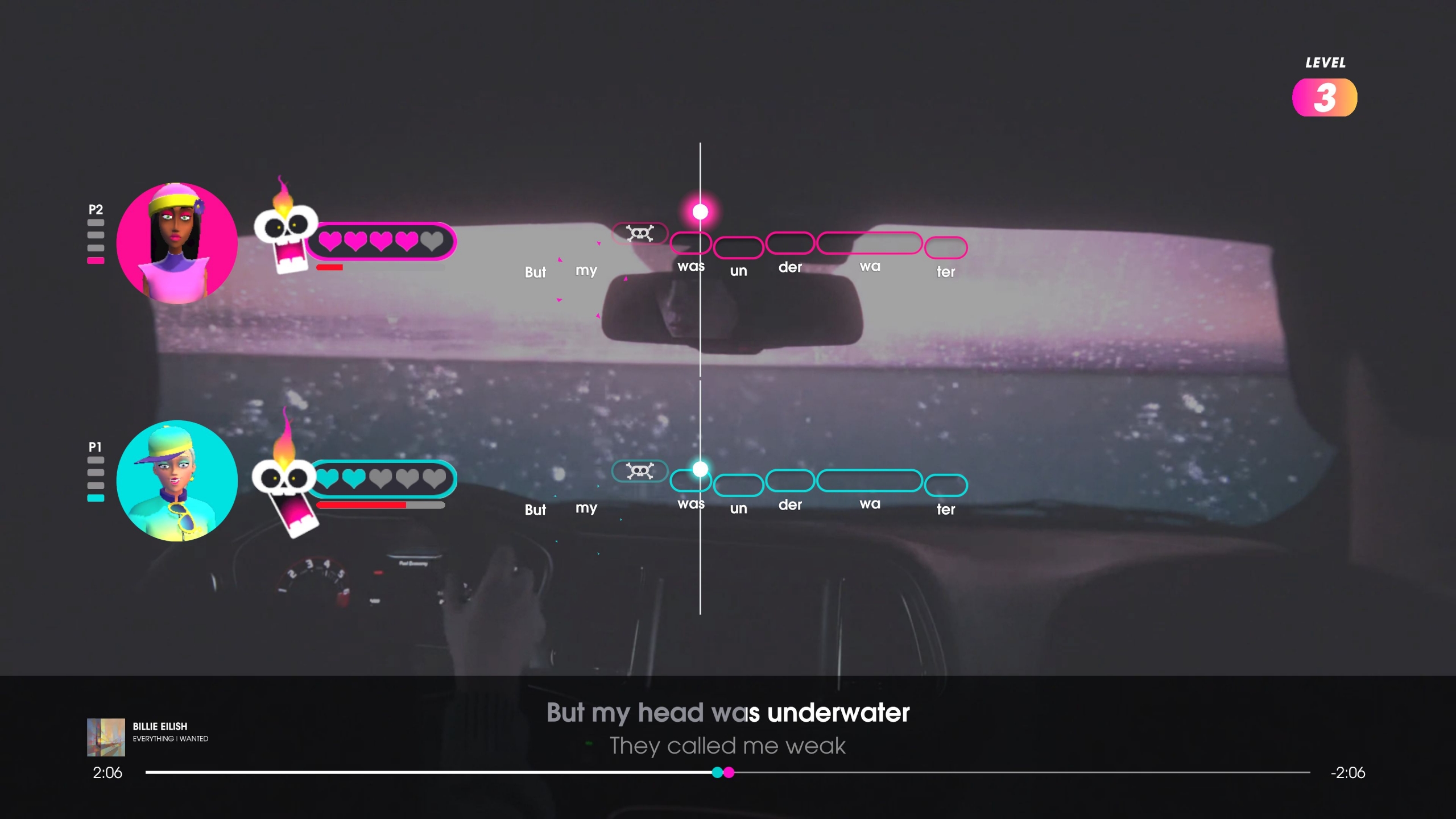 The visuals in Let’s Sing 2022 are a visual explosion of colored cotton candy, with vibrant colors everywhere. All of the characters look like genre-trope caricatures, with bright clothing and even brighter hair. It’s all fun and goofy, and fits the aesthetic of the pop-laden soundtrack…so let’s talk about that soundtrack.

If you open a karaoke book, literally any karaoke book, you’ll find some staples in it. No, not the ones that hold the pages in, I’m talking about songs like Spice Girls “Wannabe”, “Ain’t No Mountain High Enough” by Diana Ross, “Put your Record On” by Corrine Bailey Rae, “I Kissed a Girl” by Katy Perry, “Ocean Eyes” by Billie Eilish, and “Come On Eileen” by Dexys Midnight Runners. You’ll hear these tracks nearly every time you go out. So, let’s compare it to the 30 tracks you get with Let’s Sing 2022, whether you picked it up digitally or on a disc.

When you look at a list for a rhythm or singing game, you can usually partition it out into hits for every generation. Here, it’s a bit of a mystery. If you are a Wham! fan, “Last Christmas” is probably not even on your list. I like Sia and I’ve never heard of “Snowman”. Of all the David Bowie songs you have to choose from, “Ashes to Ashes” is not even making your playlist. “China Girl”, “Space Oddity”, “Suffragette City”, “Rebel Rebel”, “Changes”, “Modern Love” — all of these songs are well-trafficked in karaoke settings, but I’ve never heard “Ashes to Ashes” sung live by anyone. So it goes with the rest of the song list. It’s not about how much of a hit it was for the artist, but whether or not they get sung by people like you and me when we go out to sing with our friends. This mishmash of tracks is an incomprehensible mess. You’d have to be into the most eclectic deep cut-chasing list of artists on the planet to love this list.

Let’s compare it to something like Rockband. When Rockband shipped it had 58 tracks on the disc. Rockband 2 came with 84. Rockband 3 gave us 83, and Rockband 4 kicked us down a notch with 64. Rockband Rivals pushed that back up to 89. So let’s assume you only like one third of the tracks on the most recent installment — that’s still likely more than the entirety of Let’s Sing 2022’s opening offer.

To get the songs you like you’ll have to open your pocketbook again. Heading into the Microsoft Store you’ll find three “Best of” packs. These contain five songs each for $4.99. Volume 1, entitled “Party Classics” has “Crazy Little Thing Called Love” by Queen, “Falling In Love with You” by UB40, “Our House” by Madness, “Upside Down” by Diana Ross, “Zombie” by The Cranberries. Volume 2 is called “Legendary Hits” and has “Boombast” by Shaggy, “U Can’t Touch This” by MC Hammer, “Never Gonna Give You Up” by Rick Astley, “Walking on Sunshine” by Katrina & The Waves, “Black Velvet” by Alannah Myles. The final pack (currently) is Volume 3 — Best of 90s. “How Bizarre” by OMC, “Mmmbop” by Hanson, “All Star” by Smash Mouth, “Wind of Change” by Scorpions, and finally “Saturday Night” by Whigfield. If all of these songs sound familiar, it’s because you’ve heard them at every single karaoke bar you’ve ever gone to. These are the tracks that should have been on the disc to begin with. These are the tracks everyone sings, for better or worse. When there is little competition in the space, it lets games like Let’s Sing reach into your pocket for the songs you really wanted, or at least the songs you know. 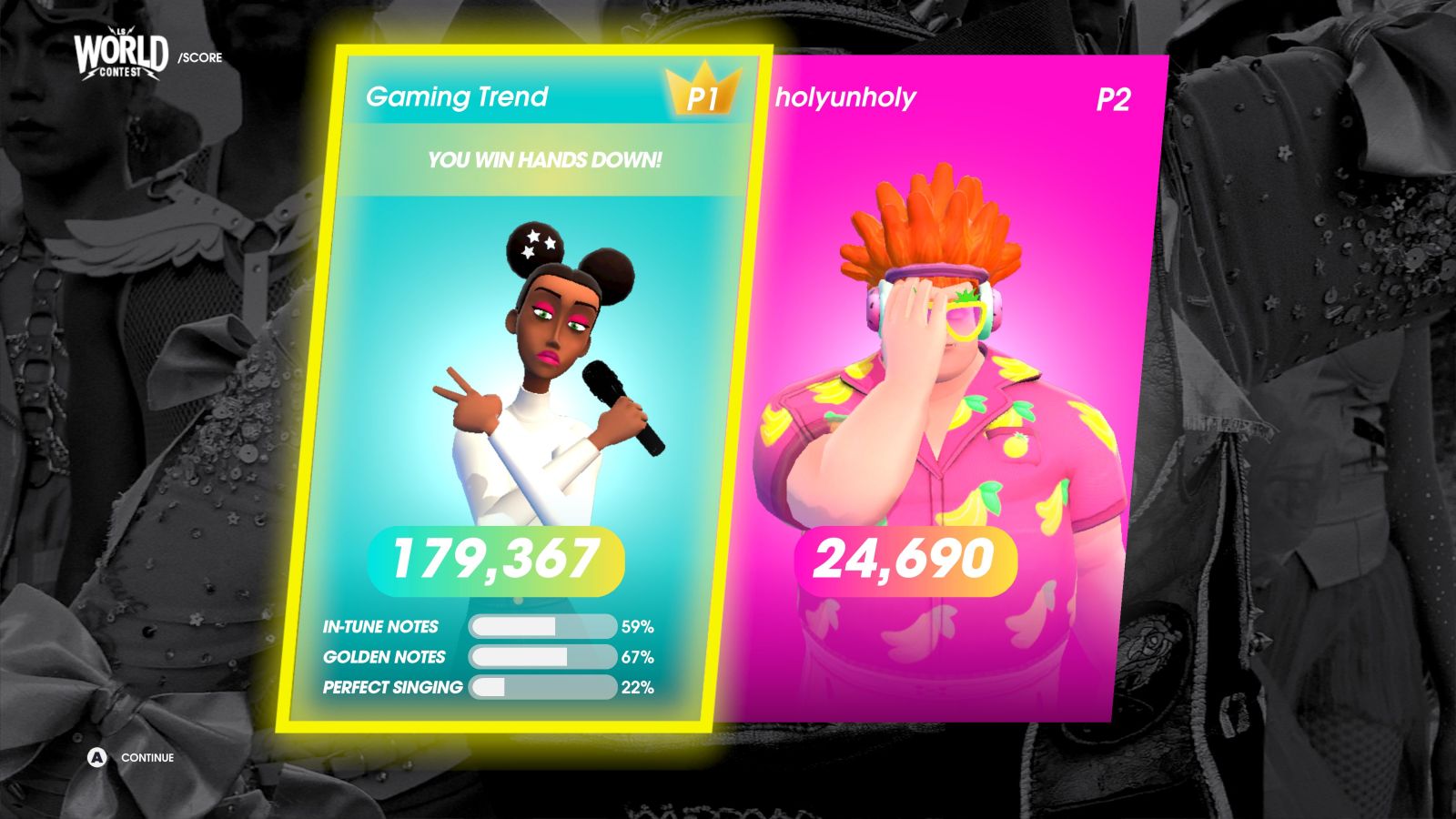 You can play Let’s Sing 2022 with your friends as it supports cooperative play for up to 8 players. As it supports both cell phones and our Rockband microphones, we gave the cell phones a spin for good measure. Using the Let’s Sing app from the App Store, we simply punched in the Smartphone Code displayed in the corner. For connectivity, it works just as well as the microphone in our playthrough, allowing everyone to join in, even if you don’t have a bunch of microphones laying around. There is something else we found in our testing, however — the microphone has the advantage. I sang into my phone and the microphone simultaneously for a few vs. tracks and the phone consistently got less points. I verified this in several modes. If you are going to play with friends, everyone needs to stay on the same input devices.

In Legends mode you have to square off against “challengers” to earn stars. Once you’ve earned enough you’ll get to try the “Boss challenge”. This mode is a little odd as it asks you to try to get three stars by matching pitch, but the moment you get that third star, the song fades out. The UI says 3 stars, but they actually mean you need to get through all three songs. The first “Boss” is “A Whole New World” from Aladdin, and frankly…it’s a mess. You have to sing both parts of the duet, which is the real challenge here. Singing both parts means you can’t take a breath anywhere, and having two different octaves blended will likely trip you up.

Beating the boss unlocked a piece of clothing for a specific character. You’d think this would unlock customization, but you can’t use clothing that way. Instead, you’ll unlock new versions of the same characters when you level up. This encourages continued play, but discourages individuality. You can earn badges to display next to your avatar, but that’s hardly making me feel unique.

There is a party mode, which lets two teams square off — blue team vs. pink team. Everyone will pass the microphone back and forth, and accuracy matters. This mode will really challenge how well you know these songs as a bar can obscure the lyrics, or otherwise mess with you. One minigame gives you a limited amount of hearts, with missed notes costing you life. Catching hearts can restore them. Honestly, this mode is the best of the bunch as it provides some variety and ups the stakes a bit. 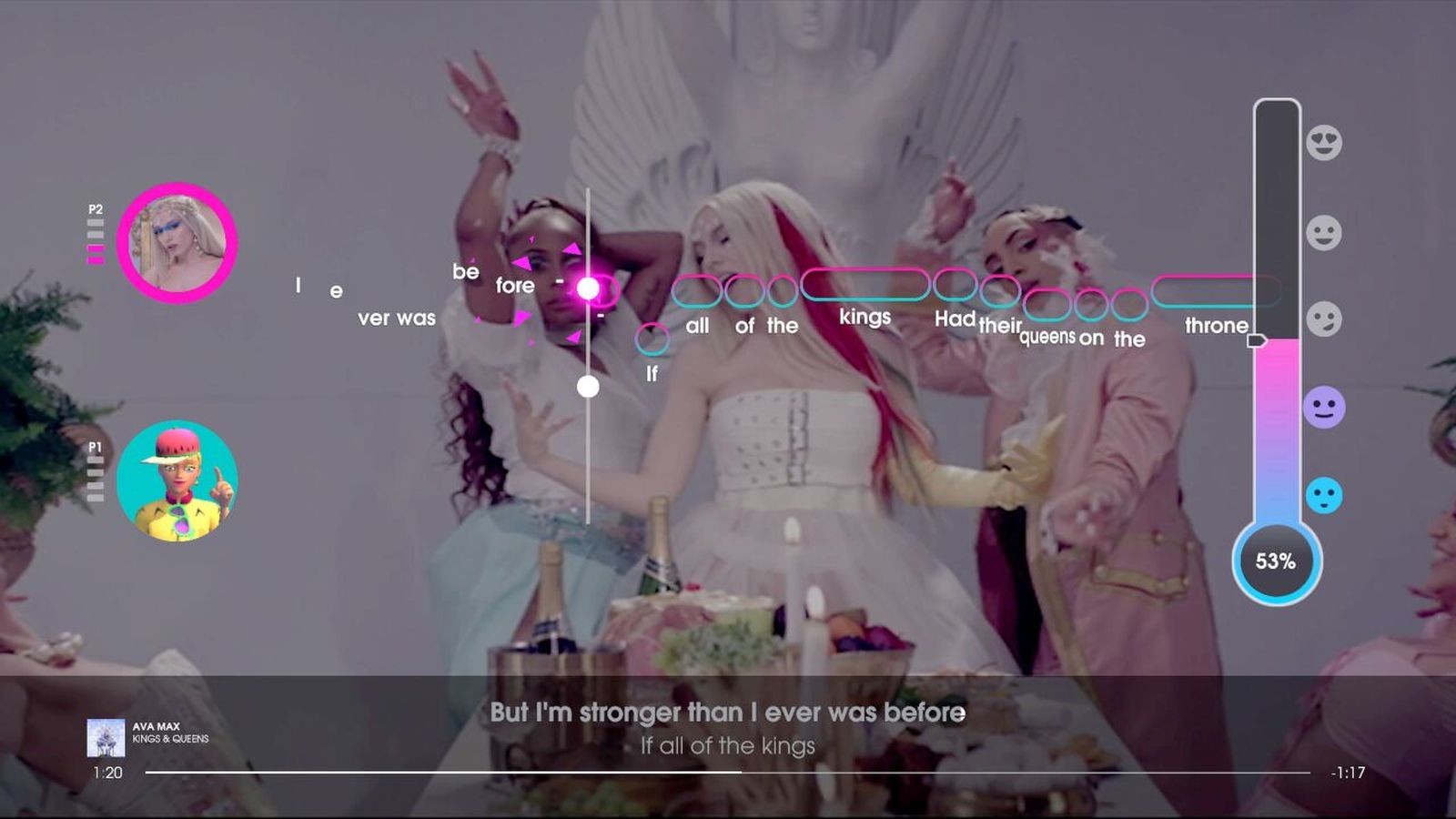 A mode called World Contest allows you to square off against other singers online. You’ll challenge one of five opponents singing one of the songs you both own. You’ll earn points for accuracy to try to rack up the highest score. Unfortunately this mode is not live — you are not actually matching up with another singer, but instead playing against their leaderboard score. You can’t hear them, and they can’t hear you, not unlike the aforementioned Rockband’s multiplayer, but at least there you are playing with other people simultaneously. Here you are simply doing a bit of score attack.

There is a mixtape system that lets you pick five songs and drop them into a playlist. That’s an expected feature for any music game. What’s strange here is that you have to unlock the next three mixtapes (which, again, is just putting tracks into a list) by going up levels.

The mixtapes, the customization (or lack thereof), the challenges — everything about this game is built around pushing player engagement. It’s about getting the player to play songs over and over, and likely buy new ones. That makes the whole experience feel very “driven”, instead of being a fun outing with friends. When you can feel the cold hand of capitalism in your game, it’s time to press eject on the tape.

With lackluster modes, and an even more lackluster soundtrack, Let’s Sing 2022 needs to take a beat and figure out what fans of karaoke want out of a singing game.