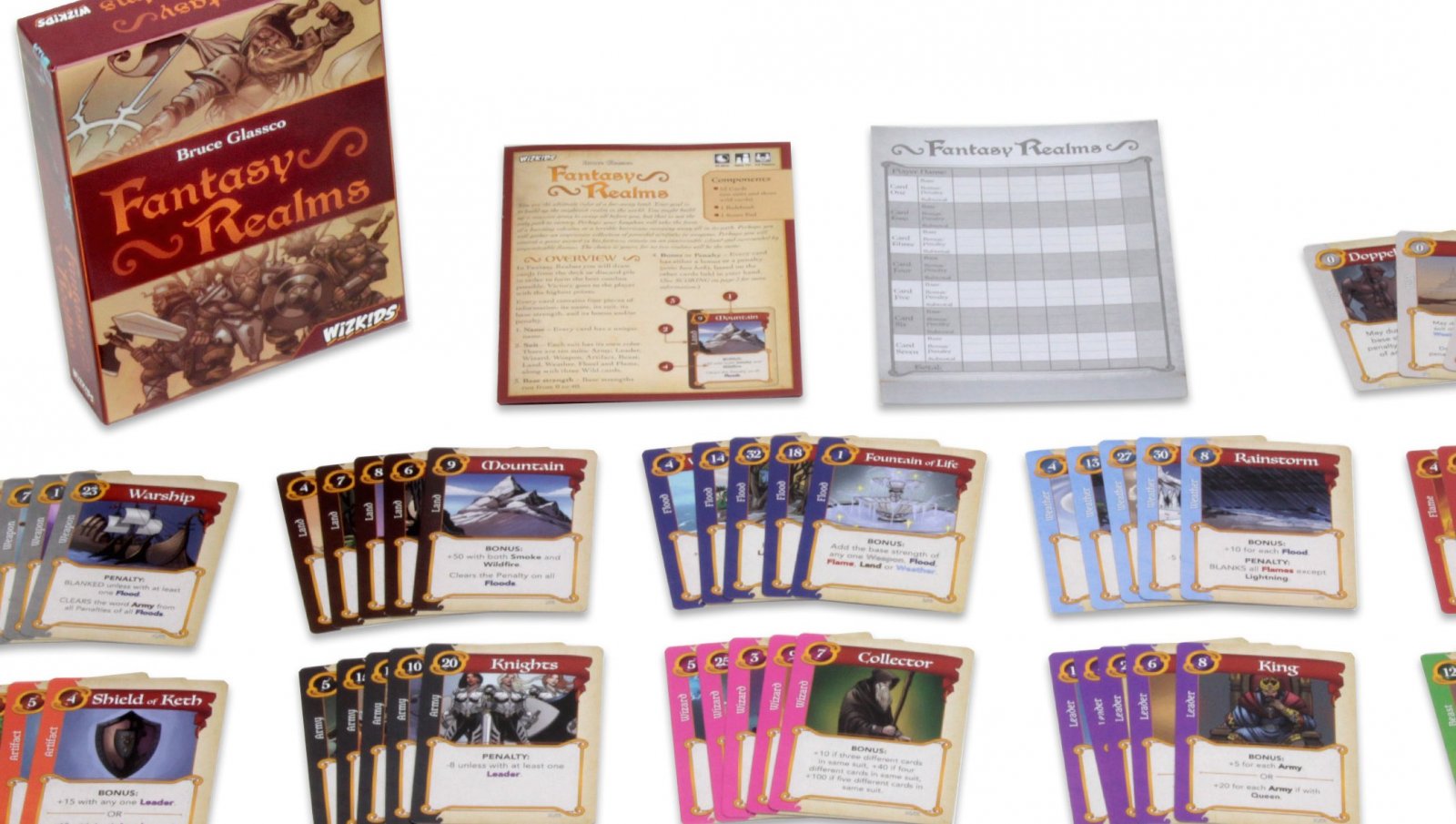 There are two games to be had in the small box of the Fantasy Realms card game. The intentional one is an interesting game of hand optimization. The unintentional one is a tedious game of conditional mathematics. The fact that one game can take just as long as the other is the glaring issue in what is otherwise an enjoyable filler.

The goal is to maximize the points of your seven card hand by drawing and discarding cards to create the highest scoring combinations possible. Every card has a base scoring value and suit that reflects different aspects of a fantasy world, such as beasts, wizards, armies, or natural elements like weather or flame. Cards will also contain bonuses, penalties, or both. The bonuses allow you to score more points by playing other cards. For example, the magic wand normally scores a solitary point, but when paired with a wizard, it scores an additional 25 points. Penalties can deduct points (the warlock lord loses ten points for every other leader or wizard card in your hand), or blank cards altogether, which wipes out all the abilities of another card or entire suit. A few cards are worth nothing alone but do allow you to copy certain aspects of other cards in the deck.

Cards are easy to read, so it’s quick to tell how a card works and what other cards can increase its scoring.

Reading every card in your hand from the onset is paramount. Hopefully, you have a few cards that can combo off each other — a starting point to building a winning hand. From there, you draw a card from the deck and then discard another. Once discards start to be laid, you can choose to draw one of them instead of one from the deck. The game plays until there are ten discards on the table. The player with the most points at that point is the victor.

The concept is simple but read this rulebook excerpt to understand how complicated combinations can be to keep track off. “When scoring, the player announces that the mirage takes on the name and suit of the rainstorm. Note that the actual rainstorm would put out the wildfire, but the ersatz rainstorm doesn’t give this penalty. The penalty for the great flood would normally blank the wildfire. However, the mountain clears this penalty…” and so on. If you are good with details, you will be successful in this game because a high scoring hand can completely unravel if one card suddenly disrupts your scoring engine.

The rainstorm adds points to all flood cards, but it blanks the wildfire card, which itself blanks all weather cards. This is what you’ll be figuring out every turn.

Once the game ends, you’ll do some math. Actually, you’ll do a lot of math. As a math teacher, I don’t mind math at all; I actually like it. Math has a time and place, though, and its use as an extended exercise at the end of a short card game is not an ideal placement. Fantasy Realms seemed to understand this and moved to lessen to work by providing a scoring sheet. Nevertheless, you’ll have to methodically go through every card to make sure you don’t lose points, or unintentionally score some.

I should note that even though I found the endgame annoying long, I did play again in an attempt to reach a higher score, especially after sabotaging my hand by overlooking a key penalty. Still, the scoring tedium is a shame considering the game’s card art and ease of play would appeal to kids if they didn’t feel like they were doing homework to determine if they won.

That said, fans of optimization games are more likely to overlook this flaw. The game is light, well illustrated, and it is fun to see if you can build some impressive combinations. Just make sure you play with someone that’s not averse to retaking Algebra I.

The potential of a fun and fast filler card game is soured by the protracted end game scoring. Combinations are the key to winning the game, but those same combinations can give you flashbacks to a high school math class. There’s a good game here if you enjoy point optimization but will be a tougher sell if you aren’t.