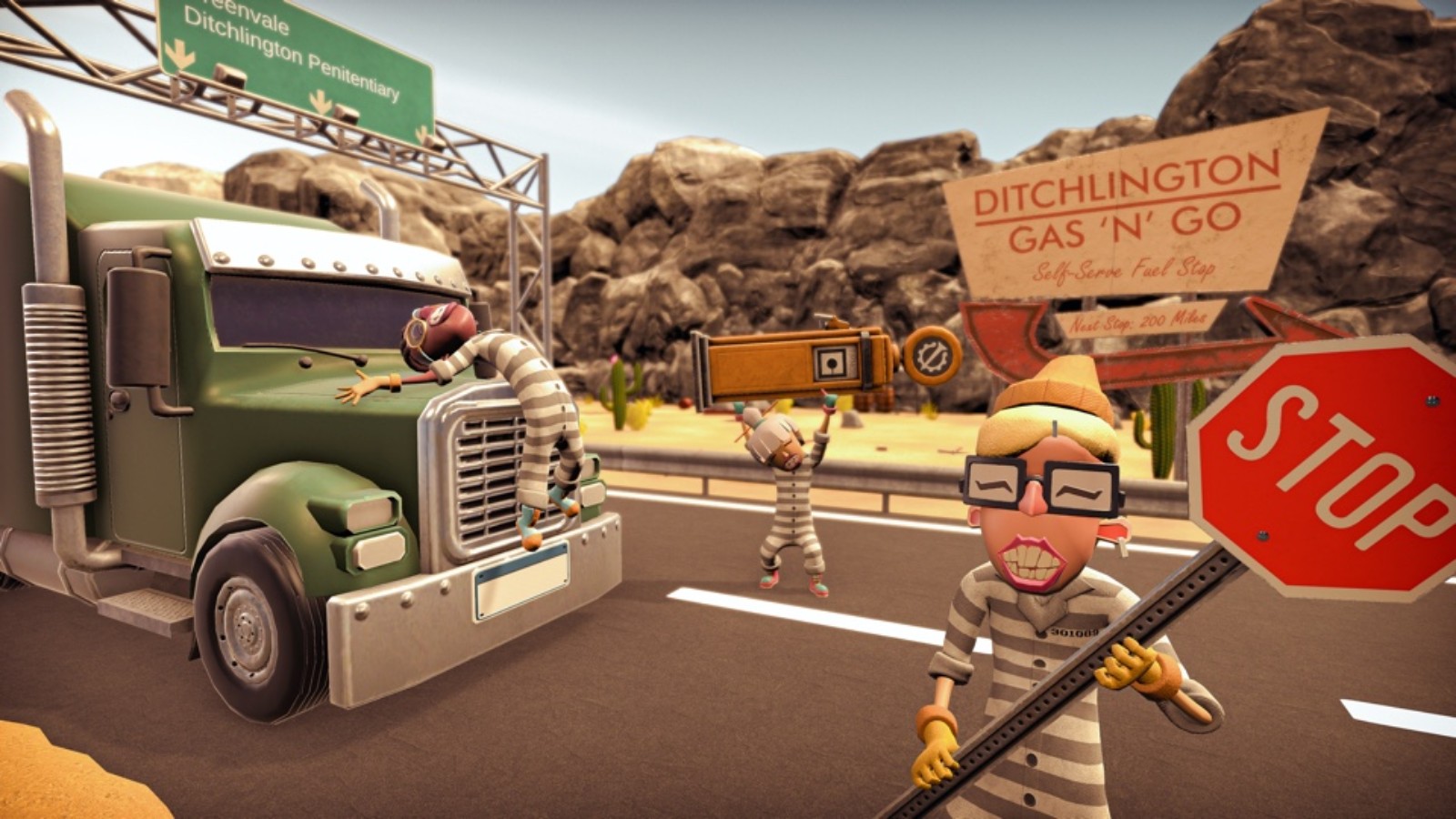 Cooperative games are a staple in my household. Cooking while sliding on ice, overcoming wonky physics to move boxes, escaping a prison, fighting dissidents in a world consumed by the green plague, and solving all the world’s problems with portals are just a few of the things my wife and I have teamed up to tackle. Now a new challenge presents itself — can we work together to lug heavy stuff out of comically-dangerous situations and pack them in an impossibly small truck? Let’s Get Packed and find out!

Get Packed’s storyline starts out simple enough — a corrupt Mayor of a city called Ditchlington decides to sell off the entire place to a local salt conglomerate. Well, once the salt barons own the town, they decide they want everyone to pack up and move out. Well, opportunity is where you find it, so our protagonists get into the moving business, starting with their friends. Once they proved their concept they bought a truck and started their lives as movers for the Last-Ditch Removals Company, and with a slogan like “About as bad as you’d expect”, you know that it’s a high quality organization. With only a handful of moves under their belt, you know they are ready to tackle the corporate world, right?

The levels in Get Packed are about as varied as you can get, with far more than the usual locations to visit.That means you’ll be helping clean out houses and apartments, as well as factories, museums, graveyards, department stores, and much more. There are four chapters available currently, each with three levels, with a fifth chapter slated for release in the near future. All told, getting a one star rating and just plowing right through will take you about two hours, but that’s hardly the objective, right? Each level has hidden objectives that aren’t exactly obvious your first attempt. Sometimes they’re as simple as not breaking any of the glass windows except the ones belonging to your client, and other times it’s just happening to nab the nearby gnome and tossing it in the truck. Like many cooperative games in this vein, the fun is in the chaos. When you are a terrible moving company that breaks half of what they move, your customers take what they can get.

Each of the levels in Get Packed are just a few minutes in length. While other similar titles might expect that you get absolutely everything done in that time, Get Packed asks that you do as much as you can, because you simply won’t get it all. This added pressure, coupled with the fact that damaged items come off of your total, adds some fun and will have you groaning “Oh come on! You had one job…how did you drop that vase!? We’ll never make any money with you moving things…”, or “WHY would you push the car into the street?!” and similar things. It’s all in good fun, and our most laugh-out-loud moments came from unintentional hilarity that ensues at the worst possible times. Check out this quick video of my wife accidentally setting off a chain reaction that cost us several thousand dollars, our reputation, and our jobs.

As you pack things, your client will highlight something they want to make sure makes it in the truck. You’ll have a limited amount of time to get that object out to the truck with as little damage as possible. To help with this, your team has the ability to pack an object of nearly any size or weight (including a giant T-Rex dinosaur bone display!) into a small box, protecting it from accidental damage as you drag it out to the truck. As soon as you box it up, the clock starts ticking, so you’ll want to get it into the transport before it decides to “unbox” itself where it might knock you out, break other things, and otherwise cause chaos. Once it’s in the truck you need to send it off to its final destination, but be mindful of where your partner might be or they’ll be taking an unintentional ride, losing valuable time that they could use packing.

One of the best parts of Get Packed has to be that, because you cannot possibly get everything out of the location in time, you tend to rush. The amount of chaos and broken stuff is multiplied when you team up with a friend, but it drives it into the stratosphere when you have a full group of four. The floaty physics aren’t as ridiculous as games like Totally Reliable Delivery Service (which is a good thing — TRDS goes a little overboard to its own detriment, in my opinion) but just nuts enough to make it loony. Grabbing things is accomplished with the triggers (one for each hand), and working together to drag things out of a house has as much chance to rip it in half as it does to do it safely. As much as the potential exists to frustrate, I have to say that it caused far more laughter than grumbling.

I did run into one issue that was fairly persistent. Despite having enough bandwidth and latency stability to handle 4K streaming of other games, Get Packed jittered frequently. Even turning the Stadia setting down to “balanced” to drop the streaming to 1080p saw little reduction in this visual hitching. It didn’t ruin the experience, but it certainly made it less smooth than I’d have liked. I’ve worked with the developers to get additional detail on what I might test, but with the game existing in the cloud, and my version being pre-release, the hope is that it’s all ironed out by the time you get to play it for yourself. I’m told that I’m the only user reporting this, so you may not encounter this issue, but in the meantime, it stutters a little bit for me…hence the title.

Developer Moonshine Studios has built something fantastic for Stadia’s first platform exclusive. Cooperative chaos combined with a delightfully goofy storyline of a salt company gone rogue makes for many laugh out loud moments. While there are some technical hitches to iron out, Get Packed is a must have for anyone on Stadia.

Ron Burke is the Editor in Chief for Gaming Trend. Currently living in Fort Worth, Texas, Ron is an old-school gamer who enjoys CRPGs, action/adventure, platformers, music games, and has recently gotten into tabletop gaming. Ron is also a fourth degree black belt, with a Master's rank in Matsumura Seito Shōrin-ryū, Moo Duk Kwan Tang Soo Do, Universal Tang Soo Do Alliance, and International Tang Soo Do Federation. He also holds ranks in several other styles in his search to be a well-rounded fighter. Ron has been married to Gaming Trend Editor, Laura Burke, for 21 years. They have three dogs - Pazuzu (Irish Terrier), Atë, and Calliope (both Australian Kelpie/Pit Bull mixes).
Related Articles: Get Packed, Let's Play
Share
Tweet
Share
Submit