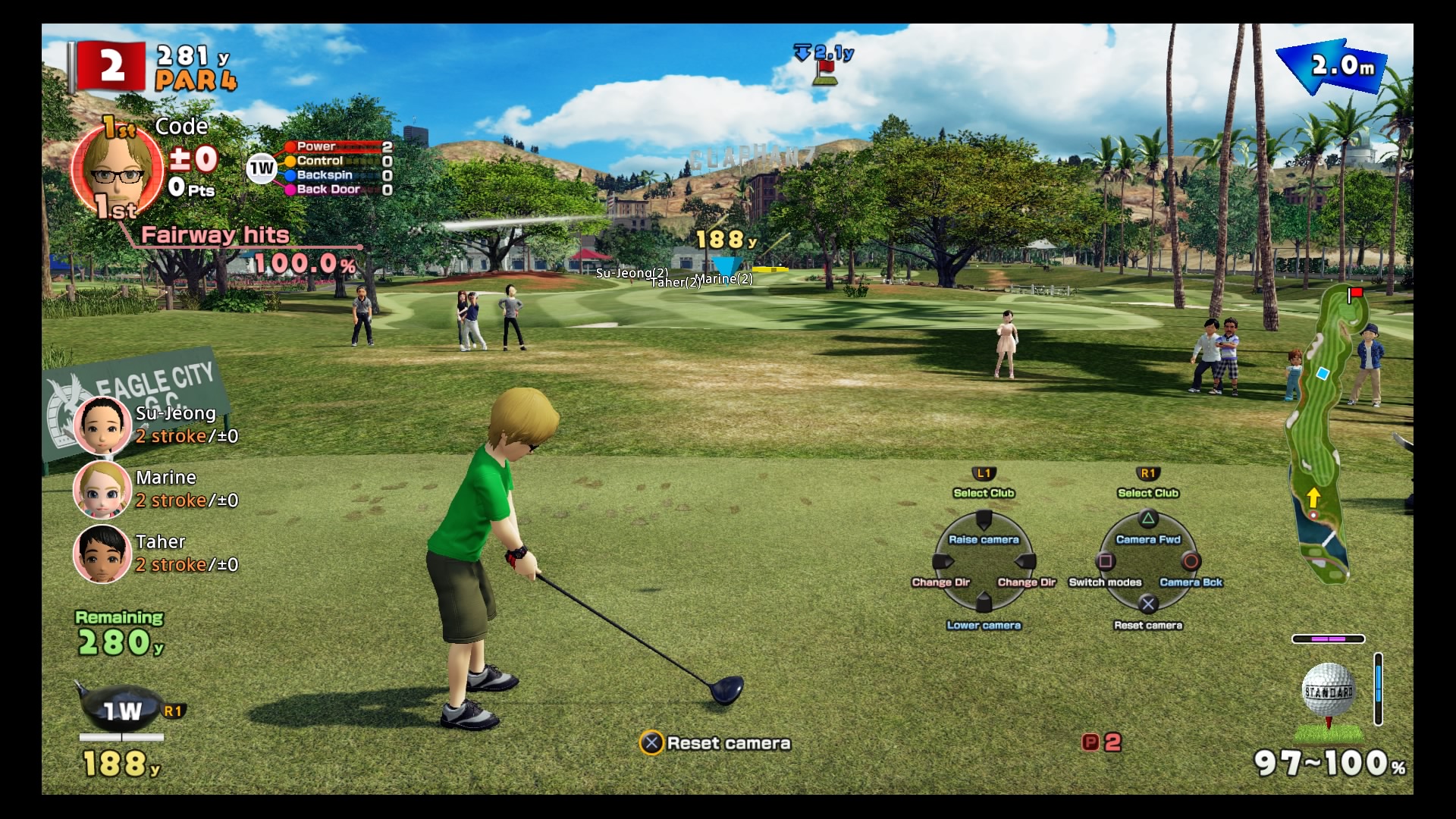 Welcome to Golf Island, an island where you… well, play golf. Before jumping into the world, you’re prompted to create your character. You can either choose a preset character to use and change to fit your preferences, or you can choose to work from scratch. I opted to start from scratch and create myself to the best of my ability. Don’t worry about this being your permanent look, as the game allows you to alter your character at any time.

Finished up creating my character

The game places you in a starting area called Home, which serves as a hub world of sorts. You can freely explore this area, which includes a road that loops around, a small park, a fishing pier, and the main open field. There are three types of NPCs you can interact with: the ones that start events, ones that give information about the game, and ones that you can copy the look of if you spend coins.

When you’re ready to golf, you can choose between offline and online modes. Offline is the best place to start in order to get practice in and level up your character and clubs. You start at rank 1 and must gain experience from completing tournaments in order to rise in rank. Every rank has three obstacles to face in the form of VS characters. There’s a specified amount of experience to earn before the next VS character appears. Once they show up, you have to beat them in a one-on-one match before you can progress in rank any further. You can challenge them as many times as necessary without penalty, so don’t worry about losing. There are even secret VS characters that only appear after completing their own requirements. For example, after getting 50 birdies cumulatively in official rounds, my first secret challenger appeared. This was my introduction to characters that will unlock activities or abilities after you beat them; in this case, I learned how to swim after the match. This enables you to swim faster in ponds or in the ocean surrounding the island.

There are two other activities that won’t be unlocked until a challenger is beaten, but in these cases, they are met in the normal rank progression. One of the VS characters shows up in rank 2, and they will teach you how to drive a golf cart. Once obtained, you can summon the cart at the push of a button. You can drive around Home and even on the courses, but there are some areas that are restricted by the cart, such as bunkers. Driving is not only fun to do, but it also helps you explore the course faster. Exploring the course allows you to find items randomly, such as different golf balls, coins, and more. The cart also has fast and slow modes that can be switched with just a button press.

The other main activity you unlock is fishing, which you won’t get to until rank 4. You’ll be able to practice at the pond in the home area, but you have to rent fishing rods and bait in order to do so. There’s a pier nearby that can’t be used until you raise your fishing rank to level 8. As with the golf cart, you’re able to go fishing while on a course, but this is only allowed online. The cost of gear rental can be pretty cheap, which keeps things light. For example, the starting rods range from free to 200 coins, while the starting bait ranges from 10 to 30 coins for ten uses. The fishing gameplay is very easy and only involves button mashing without letting a meter fill up. If the meter fills up or the time limit ends, the line breaks and you lose your catch. As long as you’re not overdoing it, this won’t be a problem. There is a trophy for filling up the fish encyclopedia, so if you like to work towards getting platinum, you’ll be doing a lot of fishing.

Now let’s move onto the bulk of your time here, which is golfing in tournaments. There’s a choice between two tournaments at the front desk and the differences are listed side by side. There are 9-hole tournaments and 18-hole tournaments; the 18-hole tournaments have double the experience and coin rewards of the 9-holes. You can even take on tournaments below your current rank, but the rewards are lower the farther you go down. After you pick your tournament, you can decide on a variety of other options before starting; these include your club bonus, ball type, and even your caddy. Clubs can grant bonuses to your power, control, backspin, or backdoor stats. Power affects how far you can hit the ball, control helps with the precision of your aim, backspin can influence the carry of the ball and even roll backwards if you can pull off a super backspin, and backdoor reduces the chance of the ball bouncing back out of the hole. As for balls, you have a finite number of any special ones you obtain, but the standard and beginner balls can be used infinitely. Every time you use a special ball, it goes away at the end of the tournament.

When golfing, there are two ways to play: the three impact shot and the two impact shot. The three impact method has you time the start, the power of shot, and the impact yourself. The two shot method takes care of the impact for you, but how accurate it is will be random. The impact timing affects if your shot will stay on course or if it will fly off to the side. I stick with the three impact shot in order to increase my odds of perfect impacts. As with other golf games, you need to take the wind, the level of the terrain, and any obstacles into account. It takes a little getting used to, but you’ll soon learn what adjustments to make in order to correct your shot. As you rank up, you’ll gain access to some shot abilities, like being able to adjust the power of your shot slightly upon impact. After setting your power, if you feel it is too low or too high, you can hit triangle on impact to raise it a bit or circle to lower it a bit. Sometimes these can be the difference between landing on the fairway or landing out of bounds. As you progress, you’ll learn plenty of tips and tricks to improve your golf game.

At the end of every tournament you play, you have the chance to add characters to your gallery. Every character you beat by a margin of three or more strokes gets added to the gallery. As you increase its size, certain clubs’ stats will be upgraded when you exceed certain goals. Every rank has it’s own gallery to work on, but filling it up is not necessary to the game’s progression. There is a trophy for collecting everybody though.

If you’ve had enough practice offline, you may want to go online to test your skills. Unfortunately, when I went online, I was unable to find many people to golf with. Since the game just came out and players may be working on playing offline to hone their skills first, this could just be temporary. I had a fun time playing alongside the few players I did run into though. Everything ran as smooth as it did offline, which was refreshing. As more players join the servers, hopefully online will continue to function as smoothly. My hope is that more golfers will gather online so that we can all take on the back nine together.

Everybody's Golf is a great game for those who want to relax and hit the virtual links. The game provides a good challenge that increases slightly as you progress. The beautiful graphics and calming soundtrack make the world more engaging and serene. The extra activities such as golf cart driving and fishing add to the already high replayability. If you're a fan of the Hot Shots series, you'll definitely want to pick this up.

Codi loves to play video games and watch movies. He will watch almost any kind of movie just to experience them. His ideas take inspiration from the shows and movies he watches, and games he plays. He also loves a good pun.
Related Articles: Everybody's Golf
Share
Tweet
Share
Submit