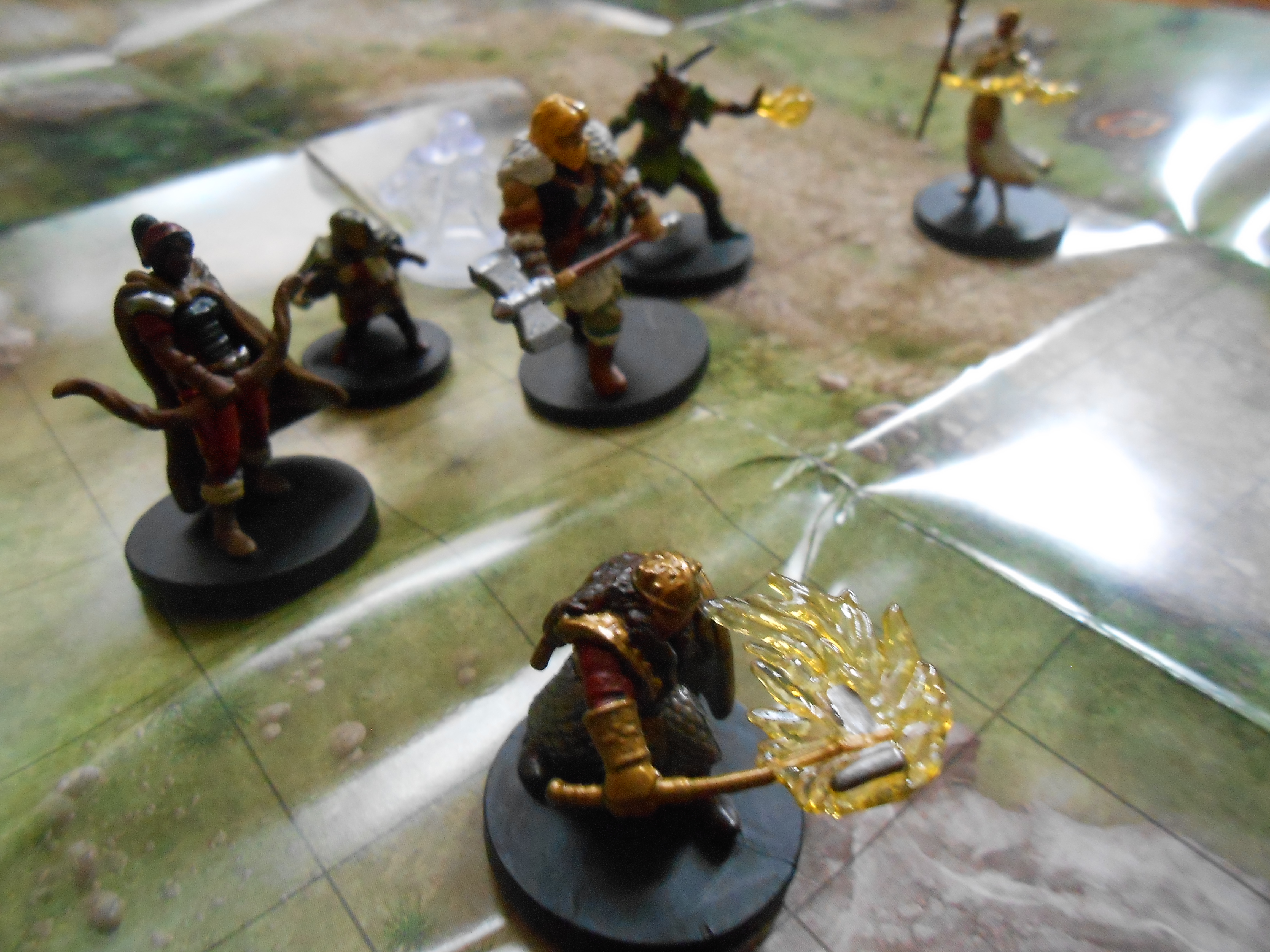 Dungeons and Dragons defines itself by growth. You and your companions striving forward towards strength, unity, and the biggest hoard of treasure to loot. Now, your miniatures can experience this same growth. The Icons of the Realm starter set released with heroes early in their journey, and the Epic Level update sees those heroes farther along the path to greatness.

The set comes with seven figures, consisting of a dwarven Cleric, a human ranger, elven wizard, northlands fighter (who can fit in as a barbarian or warrior easily), an elf druid, and a halfling rogue, along with a translucent mini of the rogue specifically designed to make clear when he is hidden from other characters. The translucent figure isn’t strictly necessary, but it was a thoughtful inclusion to keep the rogue’s status clear to everyone on the table. In a pinch, it could easily double for a spirit, illusion, or whatever else you may need.

These characters embody their archetypes. Not only in terms of stance and equipment, but body type and coloration differentiate them from one another but let you know exactly what their role is. Before I opened the package or read any materials, I knew exactly who I was looking at, and you get the same clarity on the tabletop. I also appreciate the diversity of this lineup. In terms of genders and races (and I don’t just mean the fantastical kind) this group is outfitted logically but across the spectrum, in so far as you can represent it in inch high plastic miniatures.
Less encouraging is the sense of growth I wanted to feel. These characters look similar to their original counterparts, and perhaps too much so to give you the feeling of how far they have come over their many travels. Their equipment is largely the same, which is a shame considering how much growth is through attaining more items as you level. What is different are the subtle changes. Characters that were withdrawn in their earlier incarnations are now in dynamic poses, facing down whatever opposition stands before them brazenly. Magic whirls from their hands and around their weapons.

Unfortunately, the color of these magical abilities is identical for the three characters who use them. The detailing on each is distinct, but harder to notice at a glance because the coloring is the same. It also implies the three are using the same type of magic or spell, which would be unlikely given that they each draw power from different sources. The point may seem needlessly nerdy, but the subject matter opens itself to that type of scrutiny.

The minis are more detailed than their paint jobs would allow you to notice. There are bends and curves along every piece, but the paint is often applied to broadly for you to tell. There are no huge smudges, but you also get a strong feeling that they were mass produced. The bases are also not uniformly stable, a few of them bending and causing the figures to wobble when placed down. The faces are the biggest let down, with wide, blank eyes and perfunctory mouths painted on to give the impression of emotion but none of the detail.

The starter set also comes with a small playing mat of 10 ½ by 15 in squares, which is a small addition but a nice touch to help you get everyone in the mood of D&D. It’s a small gesture and folding and refolding the paper will make sure it doesn’t last long, but the image of a forested road nestled in between boulders sets the stage well for many types of encounters.

Taken together, all of this is a great way to get a D&D party started. It’s enough for a full party and an early encounter, and for $25, 7 minis are a reasonable deal.

The Icons starter set is everything it claims to be, if not much else. Right out of the box you get everything you need for a full party, plus some flair on the side. These miniatures are not the highest quality, but they are everything you need to get into the game with a group that has all of its own life and charm.