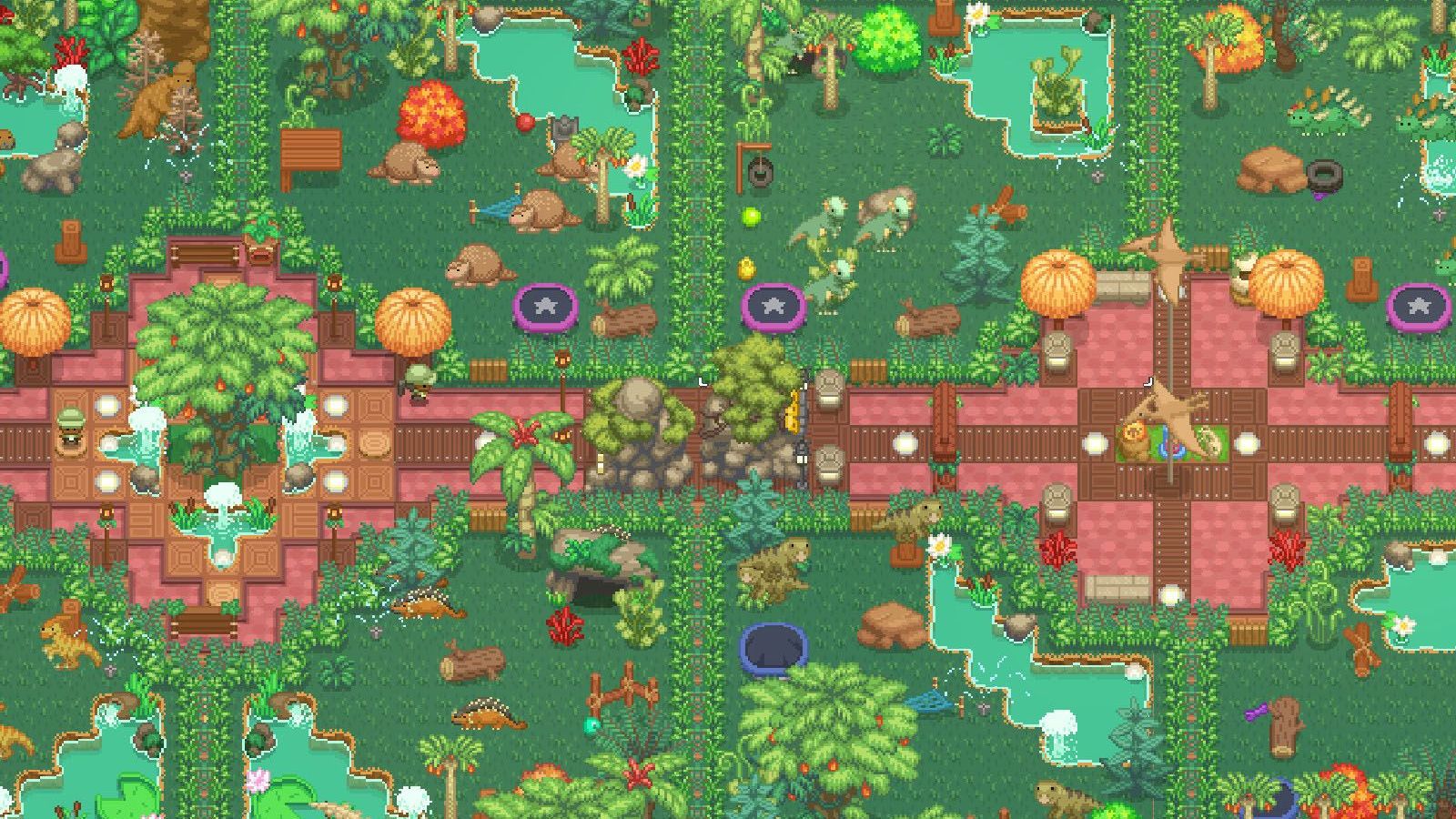 I recently had the pleasure of getting the chance to check out Dinosaur Island, the newest DLC for the popular sim game Let’s Build a Zoo. It just so happened to pop up right before the long Memorial Day weekend, and let me tell you it sucked away almost the entire holiday for me! I missed out on Let’s Build a Zoo, and was thrilled to discover what an absolute joy it was to play both Let’s Build a Zoo and its Dinosaur Island DLC.

Having never played either title before, it was super easy to jump right in, which is probably the biggest thing to point out right from the start. The UI is SO easy to navigate, and the game does not over complicate things, which I very much appreciate. I got my feet wet in Let’s Build a Zoo for an hour or so before taking flight over to my newly acquired Dinosaur Island. The DLC lets you hop over to a brand new map and start your very own dino park, and you can bounce back and forth between the DLC and your zoo at any time. This is a game that uses very simple pixel graphics, and at a glance you might overlook such a title because of it, but I found the style quite charming, and downright adorable at times, and it very much keeps up with some of the more recent competitors in the same genre that I have reviewed.

You can hop right into building and placing your enclosures as soon as you land on your island and pick a name for your newly acquired theme park. Before long, my soon to be famous Purassic Jark opened its doors to the first guests. The game already has a couple of enclosures set up for you and then walks you through the process of cloning in the Crispr station. Once you discover a new dinosaur via a dig or trades, you can clone it or splice it and turn it into something totally new (and sometimes terrifying!). 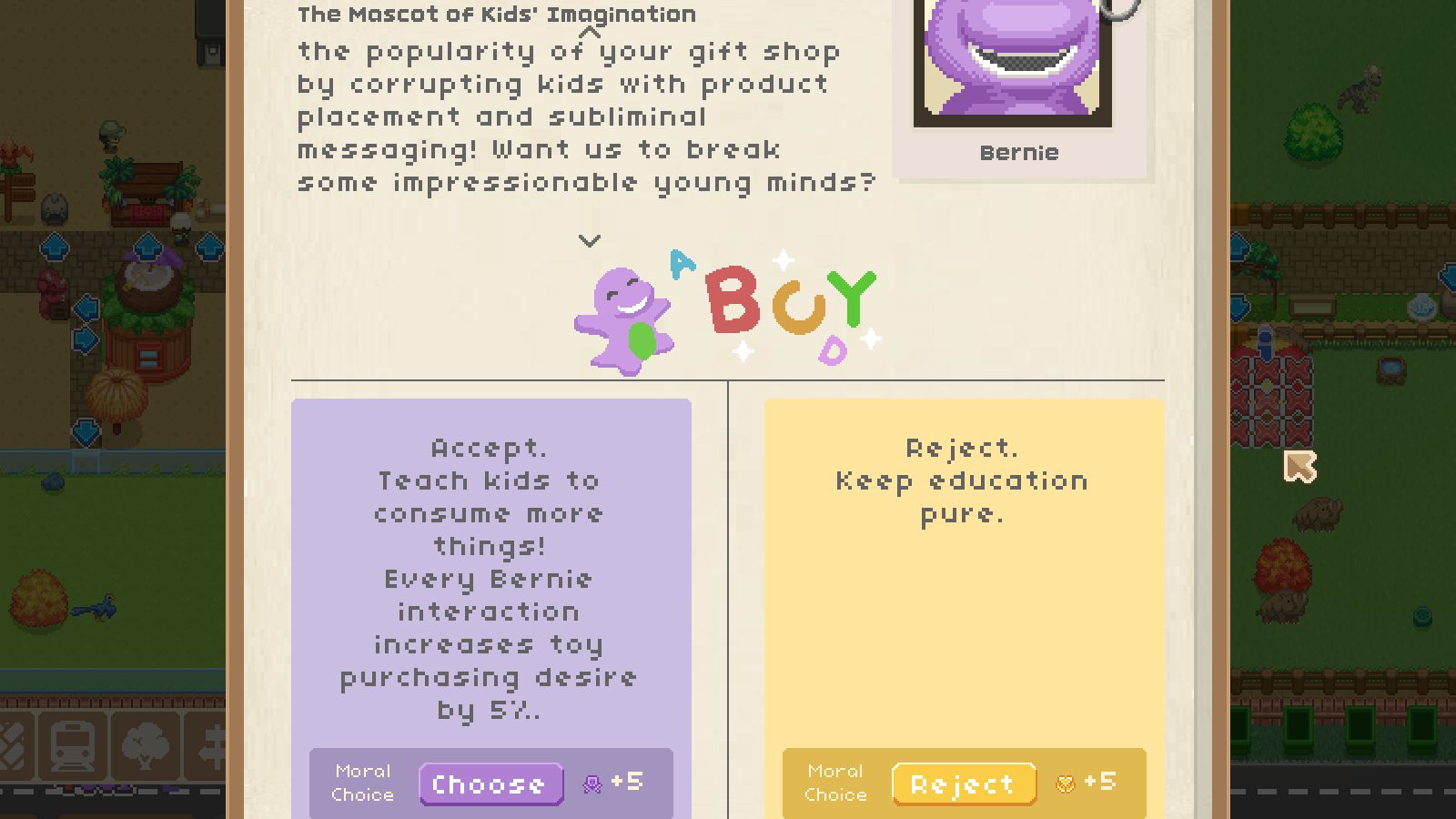 You have tough choices to make, but one thing is for sure: NOBODY likes you Barney…errr I mean Bernie!

Before long you start getting pop ups that require you to make a decision. Some of them come with a moral choice, which will affect your game in a HUGE way down the line. For example, you find a lost dog, and it has a collar on it with the owner’s number. You’re faced with the choice of calling the dog’s owner, or putting it into a pen to let the dinosaurs “play” with it to reduce their stress. “Bernie” the Dinosaur, which is clearly Barney the Dinosaur from that horrible show in the 90s that we all wanted to forever forget, shows up and gives you the choice to corrupt kids with product placement and subliminal messaging to get them to buy more in the gift shops. The dark and sarcastic humor in several of these little choices totally won me over on the game. My advice, don’t skim over these, take the time to read them because they are worth it and had me literally laughing out loud on several occasions. 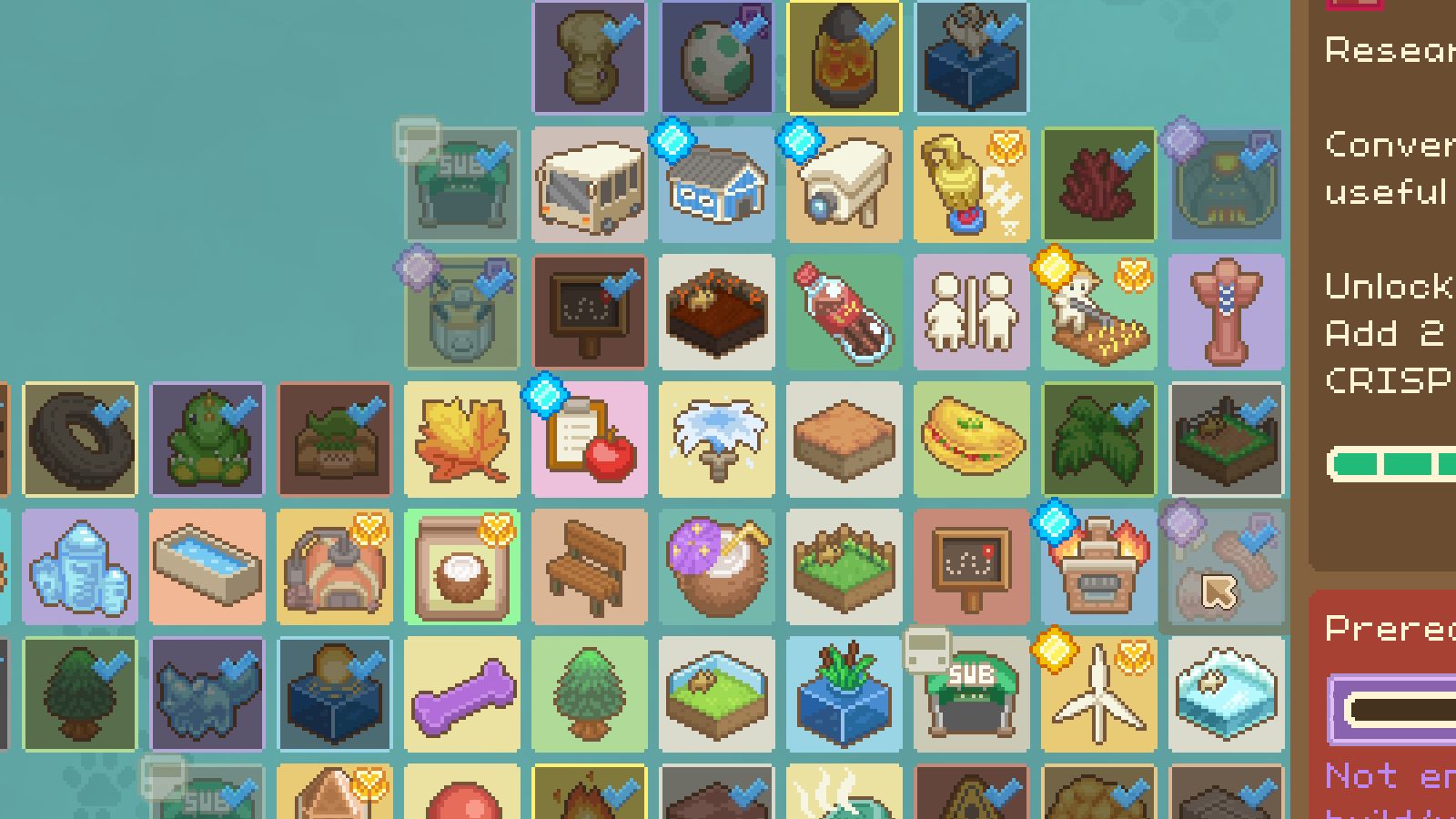 A quick look at the items you can unlock via your Research Hub. There are a LOT of upgrades for your park, which makes it a bunch of fun!

The reason that you need to pay attention to these choices mentioned above is because there is a skill tree that unlocks all the things you’ll need to build a successful park via your research team. This can be things such as buildings, enrichment toys for the dino enclosures, farm equipment and crops, park decorations and so on. Some of these things require either good or evil morality points. I chose the good path, but some of the evil choices are quite hilarious, such as a sewage recirculator that recycles all the liquid in your park from both animals and humans, or the processor, which takes dead dinosaurs and turns them into food for the unsuspecting guests at the park. Speaking of food for the park, you also have big choices to make in each individual restaurant and store within your park. Do you want to skimp on ingredients and bump up the corn syrup and MSG in your food and drink, or do you want to serve customers higher quality? All of this comes down to profit at the end of the day. Pro tip: make sure you find your way to unlocking one of the options to discard dead dinosaurs early on, as it turns out the guests don’t like a stinking, rotting dinosaur carcass in the enclosure! 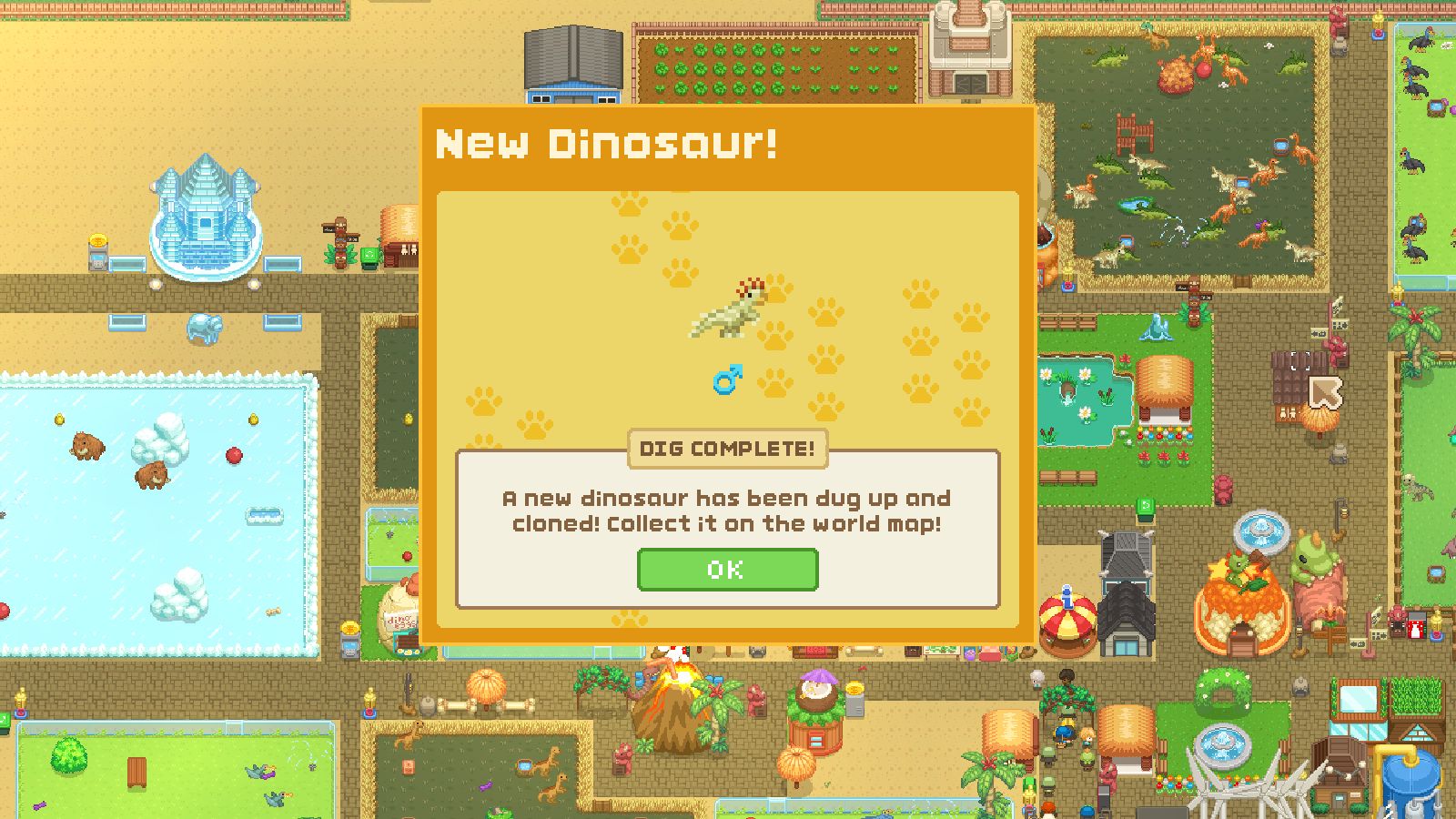 Just dug up a new dinosaur! You’ll get to the point you have several digs going at once, keeping you with a constant stream of new attractions!

You earn your research points at a fast enough pace, and before long you will have a farm unlocked and the ability to hire more paleontologists to make your digs faster. I only have two nit-picky things to say about Dinosaur Island, and they both have to do with the dig and moving the actual dinos in. Once a dig site is complete it shows you the name of the dinosaur you have uncovered, but I really wish it told you what kind of habitat it needed. I found myself waiting until they arrived, putting them in an enclosure and pausing the game in order to either move them or build them the proper enclosure. If we knew ahead of time, we could have their perfect home ready for them. The other thing is that while the UI is very simple, if we had the ability to move an entire enclosure to a new area OR to replace the type of enclosure it is (say, volcanic to jungle) it would save a lot of time. Thankfully extending or modifying your already existing enclosure is a breeze, and that circles back to what I was saying about the UI being so easy. You can move anything but an enclosure with a simple click.

Moving animals to new enclosures is also easy, and actually it might be the easiest time I have had doing such a task in any comparable sim game. You literally just click on them, click move, and then click where you want them to go. No tranquilizing, caging, transport or anything. Some dinos will reproduce quite quickly, and there is an option to turn off breeding if you’d like, as well as an option to donate some animals. 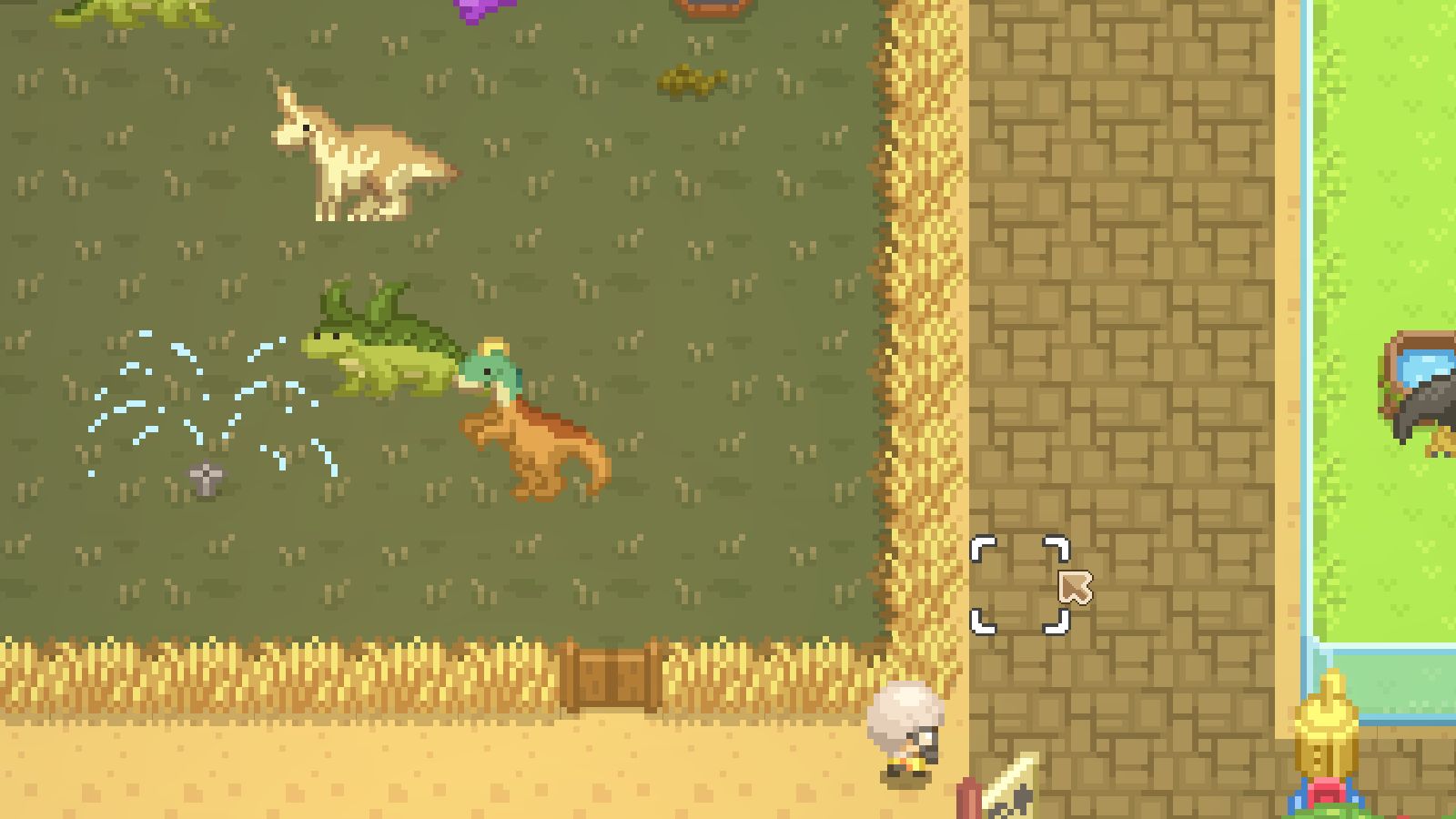 The enrichment items for the dinosaurs are really important to balance, as well as having enough water for them, so keep an eye on the tab that tracks it. Again, a super easy UI for that, you can’t miss when something is going wrong in your park. I am at the point I have upgraded my water pumps, and even have a few water towers. Because I chose to go on the good side of the morality system, I also generate my own energy with wind turbines, and grow a lot of food on farms in the park. The enrichment toys can be quite adorable; there is a leaf pile they play in where they jump inside and roll around then pop out, a water sprinkler, some high beams, squeaky toys, and plenty more. I always find myself unlocking those options before other things because it’s so cute.

I have not played around with the Crispr splicing system as much as I probably should have but I did make a new dino out of an Edmontosaurus and an Ammosaurus, which created an Ammoedmonto. He is a cute little dude and he gets along well with all the other dinos in his enclosure. I can see this system being very fun once you have a lot of dinosaurs unlocked. Right now I only have 17 enclosures with 16 different dinosaur variants, including some adorable new wooly mammoths I just acquired! I also just built my first volcanic enclosure to bring home some Velociraptors.

You can pick up Let’s Build a Zoo: Dinosaur Island DLC on Steam, it’s currently going for $9.99 USD.

I hope that the future of Purrasic Jark is bright, and not filled with escapees mauling my guests like those “other” dinosaur theme parks. My experience with Dinosaur Island has been very relaxing, at times downright funny, and not too overwhelming. A lot of sim games, and especially some sim games in the same genre, like to over complicate things. Let's Build a Zoo: Dinosaur Island is just the right combination of giving you enough to manage without making things hectic. I had an absolutely wonderful time over the long weekend enjoying every aspect of this charming title, and I look forward to playing some more.

Holly Hudspeth is a best-selling author living in Fort Worth, Texas. She has six published novels to date; The Skyy Huntington Series, which is an epic dark fantasy adventure, and One Small Detail, a stand-alone medieval fantasy. Holly also enjoys writing fan fiction based on her avatars from games such as EverQuest, Elder Scrolls Online, and World of Warcraft. Her first major purchase at the established age of nine was the NES, and she has been gaming ever since. She enjoys fantasy games, city builders, RPGs, MMOs, SMITE, and The Sims franchise. Most nights she is in SMITE with her husband and friends, or playing ESO. When she isn't gaming, she is probably either at Disney or planning her next trip there.
Related Articles: Let's Build a Zoo, Let's Build a Zoo: Dinosaur Island
Share
Tweet
Share
Submit