I know I’m not the only streamer out there struggling to find a good streaming setup. I don’t have the space for a greenscreen, and finding ways to keep the background interesting without being distracting is a challenge in and of itself. I’d found that aiming a slowly cycling, color-changing light at my background wall helped add some visual interest, but still only just a little. I was just starting to tinker again with my setup when I was given the chance to incorporate the Philips Hue Light Play Bars, and their accompanying Hue Sync app, into my streaming setup.

Quite honestly, I was not quite sure how well the Hue Light Play Bars would work with my setup; I often to stream during the day, with streaming lights pointed at me, and subsequently back to the wall behind me. Would the light bars be both bright and vivid enough to make a difference when aimed at the (admittedly, very challenging to light) gray-and-white brick wallpaper behind me? Given that I don’t generally play FPS games, would the sync make much of a visual difference with my more casual games, which generally lack in dramatic muzzle flashes or blood splatters? Perhaps most importantly, how difficult would setting up the game sync be on a daily basis? I’m here to report that I was pleasantly surprised by the answers to all of these questions. 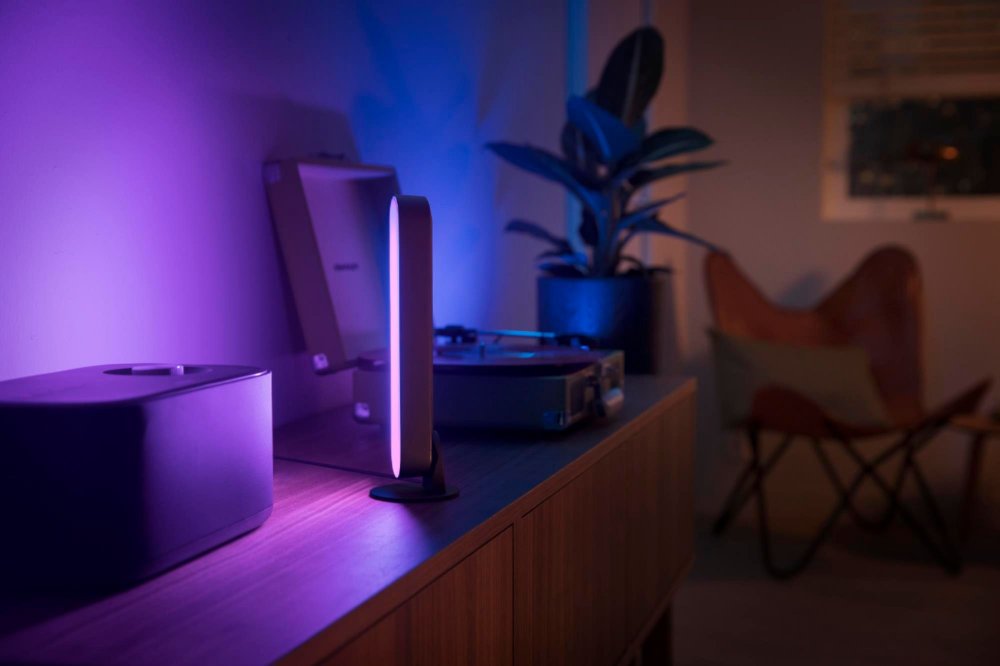 First, let’s talk setup. The first step was to set up the Hue Bridge by plugging it into the power outlet and hooking it into the router. Then it was time to plug in the Light Play Bars themselves, which come with a pretty cool adapter which sports three jacks, allowing you to power three bars per adapter. I then started fiddling around with placement while I began the slowest part of this process: using the Hue Sync app to update both of the Play Bars. This took a couple tries, as apparently the bars cannot update if the app is running on the background of your phone, and ultimately took more than an hour for both bars to update properly.

During this time, I played around with different mounting options for the bars, as they come with a few setup options. The first option is a wall mount, which you can then use the provided ring of double sided tape to affix to the wall or the back of your monitor. This is a simple solution, though there’s no way to swivel or angle your lights, meaning they can only point straight forward. The other option is to screw the bars vertically into a small stand. The stand worked great for one of my bars, but there wasn’t a good out-of-the-box option to affix a light to a wall at an angle. Fortunately, this was pretty easily overcome with some extra double-sided tape I had laying around. I was able to use an angled portion of the bar’s side to stick the light to the wall beside my computer while having it pointed at the wall facing my computer.

With the lights in position, it was time to download the Hue Sync App on my computer and set up my entertainment area. The app ran a few tests, allowed me to position the bars into their correct positions in the virtual entertainment space within the app, and then asked which monitor I’d the lights to sync to. It was as quick and easy as smart devices should be. I was even able to tell my lights to power off as soon as I ended game sync, making that one less thing to remember after finishing a stream. I turned the brightness far up, then dove into TemTem during a bright, sunny afternoon to see what, if any, impact the lights would have on my background. 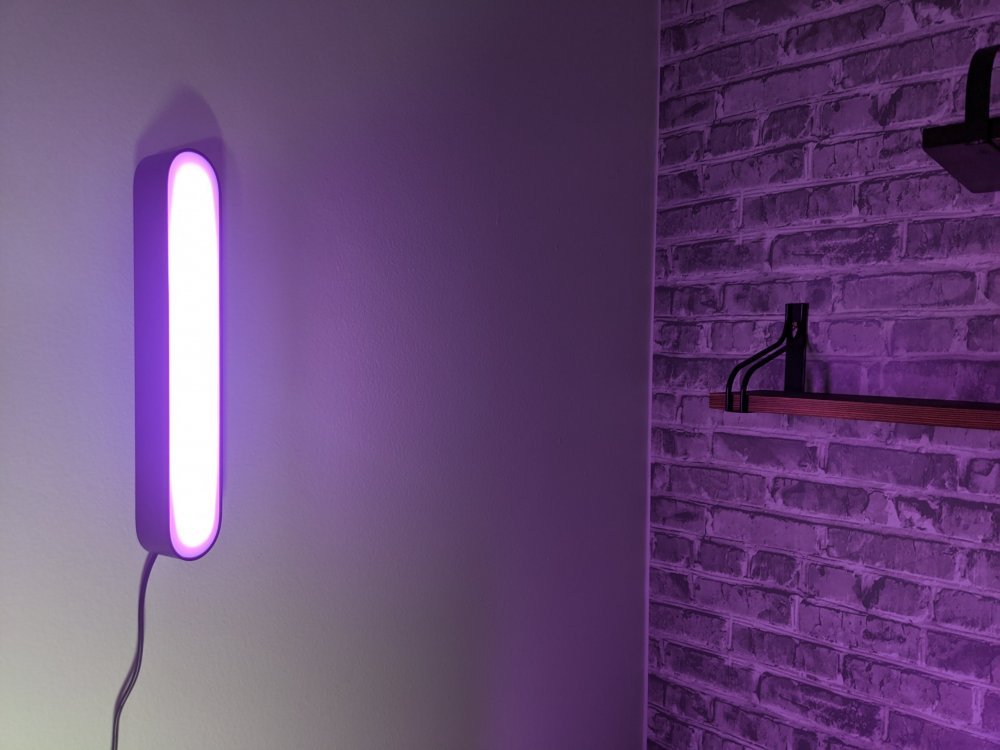 Much to my surprise, even being positioned two feet away from the wall and fighting against the natural afternoon light and my streaming lights, the colors of the Hue Light Play Bars were not just visible, but vivid and bright. I set up the lights so they would be physically behind me, out of my peripheral vision, so I kept an eye on my webcam during the stream, and made a mental note of how nice the bright teal-blue color of TemTem’s loading screen looked against my wall. Then I stepped into a battle, causing the lights to flicker dramatically in time with the flashing colors of the game’s world-map to battle-map transition–dramatic enough that it pulled my attention away from the gameplay of the screen before me and to the preview of the webcam image on my stream. It did this in the middle of the day, while competing with three streaming lights. Impressive. Most impressive.

I’ve tested these lights across several streams, and even turned them on while just gaming for the fun of it, as I’ve found they make me much more aware of the color pallets that game developers have chosen for different scenes. It certainly adds drama to my background, especially to games which have dramatic transitions, but also provides a soothing, consistent feel to more slow-paced leisurely games. While it’s not as immersive as a green screen, the Hue Light Play Bars help link me and my setup to the game I’m playing, bringing me a little closer to the action, at least in the eyes of my viewers. You can even assign seconds of delay, if your webcam and gameplay are coming in at different rates, ensuring that your audience sees simultaneous in game action and real life light changes. 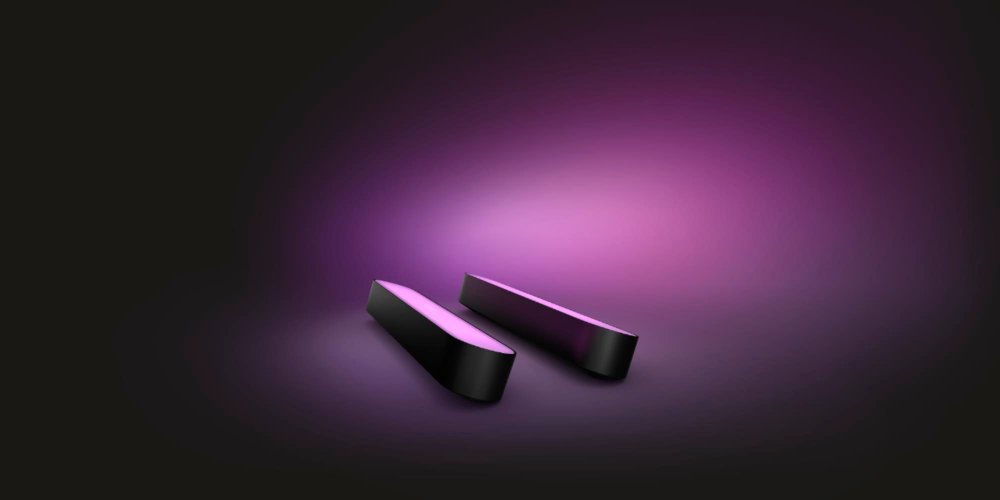 This system is slick and very simple to turn on and off for each stream; you can sync it to a monitor, to your Razer products, or, if you feel like investing another $79 for the package, you can download a third party app which has dozens of custom light effects. It is worth noting that all of these options rely on you playing on PC, but console users, worry not! You can sync up your Light Play Bars to your console gameplay by using the Hue Sync Box, though there is another work around if you’re like me, and use your secondary monitor for both PC and console gaming. Even though the Hue Sync App can’t see my secondary monitor when it’s time to switch over to my Switch (pun not intended), I can still get the same effects by pulling up the game feed on my primary monitor and having the app sync to my primary monitor until the end of that play session.

The Hue Light Play Bars have impressed me every step of the way, providing relatively painless set up, bright, vivid colors, and easy-to-use game sync lighting effects, even when I’m not using them strictly as intended. While I’d love to see some more versatile mounting options and maybe even a spotlight, allowing me to cast their light a little bit further, I really can’t find much else to criticize. They add some vivid, much-needed color to my streaming background, and help visually connect me, as a streamer, to the game I’m playing.

Hue Light Play Bars are a pretty slick package, making it easy to add a splash of color and dynamic lighting to just about any given area. These lights are powerful enough to still be seen vividly even while competing with streaming lights on a bright day, and come with simple programming which allows you to add unique lighting displays, delay sync to match with what your viewers see, and have them automatically power on and off whenever Game Sync is started or stopped. These little lights, when paired with the required Hue Bridge, make it easy to add some visual interest to your entertainment center or streaming background.