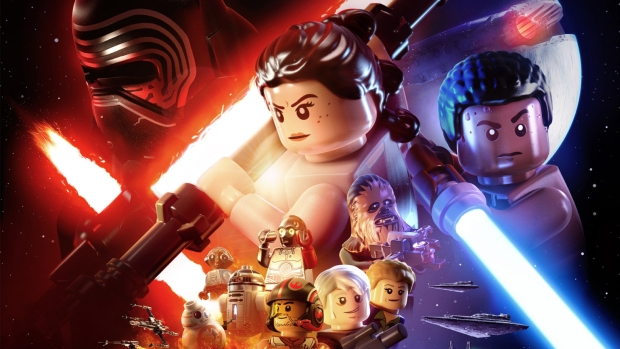 LEGO games have been as consistent as Call of Duty over the past few years. Included in this list are Jurassic World, Lord of the Rings, LEGO Movie, as well as both Marvel and DC, so it’s not a surprise that developer TT Games would tackle the largest property in the universe — Star Wars. Some have argued that the LEGO games have fallen into a safe pattern of sticking to the source material. Could they break out of that mold in a galaxy far, far away?

LEGO Star Wars opens with some setup material, deviating quickly from the beats of the movie and introducing the first of several story hubs. With a nod to Episode VI, you’ll start your adventure on the forest moon of Endor with all of the things you could expect. Wicket, Chewie, AT-STs and more helps tie into the new movie, even if it’s an odd starting place.

Han Solo, just as suave as in the movie.

There are several of these offshoot moments like Endor that fill in some of the movie’s assumptions, or flat out providing new canon. For instance, did you know that Poe Dameron rescued Admiral Ackbar? Me neither, but it’s a blast! How about those moments skimming above the lakes of Takodana in Poe’s black X-Wing fighter on his way to rescue Han and Chewie? They happened off screen, but now you get to see what happened before their arrival. You’ll even get to capture those deadly Rathtars as Han and Chewie. Whether it’s the on-rails but incredibly-gratifying dogfighting sections, or getting a new slant on the storyline, the major beats of the movie are well represented and quite a bit of fun.

This game is clearly aimed at the younglings, and that manifests more clearly in combat. The game’s auto-targeting makes it easy to cut down foes and keep the action moving. It worked out well as my non-gaming wife was able to enjoy the cooperative play without a great deal of frustration. There were even some laugh out loud moments.

Some old friends and foes make an appearance.

The best part of LEGO Star Wars: The Force Awakens are the flying sections. Throughout the game, you’ll get several opportunities to fly iconic vehicles from the franchise. If you thought it’d be great to recreate the high-speed escape with Rey at the helm and Finn at the guns, you’ll have your chance here. These are as on-rails, as is the rest of the game, but that doesn’t stop them from being incredibly fun or funny.

Each character in LEGO Star Wars: The Force Awakens has a special power. Chewie can throw grenades and use his bolt caster, Rey can scale the environment and reach areas others can’t, and BB-8 can access computers and zap foes. You’ll be treated to an opportunity to even team up as Darth Vader and Luke Skywalker to take on the Emperor (again) in Episode VI, giving you some saber / force power time. Like all LEGO games, there is a deluge of characters to unlock, providing ample opportunity to find new areas with character-specific puzzles throughout.

The new mechanic lets you build multiple things from your bits.

The puzzles in LEGO Star Wars: The Force Awakens are slightly better than standard fare to its LEGO brethren. Much of it highlights the various powers each character possesses, and none of them leave the second player standing around for too long. To spice things up a bit, the game also has a new gameplay element for the franchise. Rather than simply automatically building something when you find a pile of pieces, you’ll frequently get to choose between two or three structures. There’s no penalty for trying all three, so they don’t pose any sort of permanent decision point, but they often gate a path to finding a hidden goodie or split the players by their powers.

If there was one surprise in LEGO Star Wars: The Force Awakens, it’s that the original cast recorded new lines for the game. Filing in some of the story gaps, these additional lines connect with the incredibly authentic overall product, taking it to the next level.

I can’t talk about how fantastic the audio is without talking about how many audio glitches I heard. Frequently music cuts out, voice work sounds like it was recorded in a tin can or other similar issues. Similarly, there are a handful of visual and puzzle glitches. Sometimes events refuse to trigger unless you quit and retry, or transition scenes won’t play. Thankfully it’s not frequent, but it does cause some frustration. Given TT’s track record, they’ll have it patched up shortly.

As authentic as it gets, LEGO Star Wars: The Force Awakens is 100% fan service. With new voice work from the cast, and the signature TT Games style, the only thing we can hope for in their next outing is a cleaner execution, and some new features to play with. The tried-and-true formula still works, but it’s time to shake things up.

Ron Burke is the Editor in Chief for Gaming Trend. Currently living in Fort Worth, Texas, Ron is an old-school gamer who enjoys CRPGs, action/adventure, platformers, music games, and has recently gotten into tabletop gaming. Ron is also a fourth degree black belt, with a Master's rank in Matsumura Seito Shōrin-ryū, Moo Duk Kwan Tang Soo Do, Universal Tang Soo Do Alliance, and International Tang Soo Do Federation. He also holds ranks in several other styles in his search to be a well-rounded fighter. Ron has been married to Gaming Trend Editor, Laura Burke, for 21 years. They have three dogs - Pazuzu (Irish Terrier), Atë, and Calliope (both Australian Kelpie/Pit Bull mixes).
Related Articles: Lego Star Wars: The Force Awakens
Share
Tweet
Share
Submit