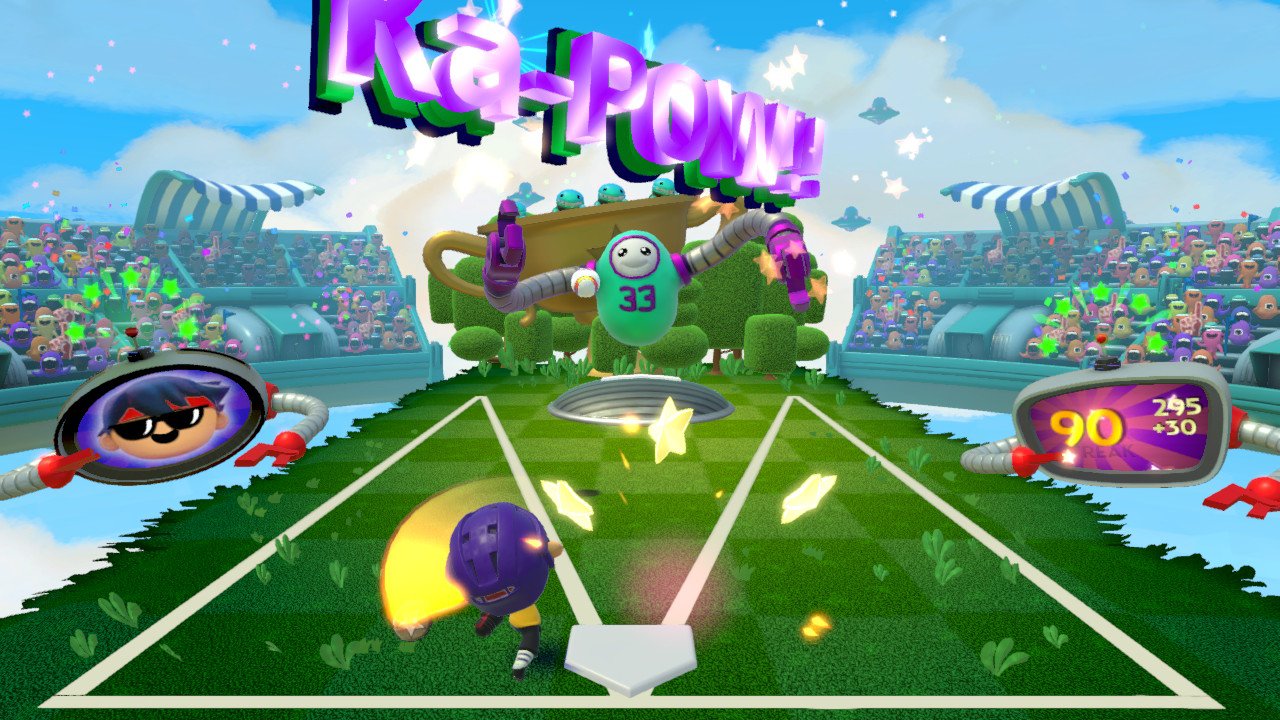 If there’s a genre that’s been on my radar this year, it has to be rhythm games. I’ve enjoyed my time with Hatsune Miku: Project Diva Future Tone, Thumper, and The Metronomicon: Slay the Dance Floor this year, as it’s been a wonderful year for games in all genres. While Harmonix has been known for Rock Band, Amplitude, and Dance Central, it also released a smaller title known as BeatSports for the Apple TV. Now released as an expanded version for the Nintendo Switch, Super Beat Sports tries to get up to four players playing sport-like rhythm games. Does it land a melodic home run or a sharp strikeout?

Super Beat Sports is a collection of five minigames, the last of which is exclusive to this Nintendo Switch version: Whacky Bat, Net Ball, Gobble Golf, Buddy Ball, and Rhythm Racket. The first three games are available to play for up to two players, while the latter two can be played by up to four. Each game holds a simplistic yet bright and charming style, with aliens and characters colorfully displayed. While there aren’t any licensed tracks included in the game, Harmonix does a great job making the music fitting and upbeat, with an electronic style featured on the dozens of in-game songs.

THEY’RE ON TO US.

As it’s an all-ages party title, the graphics are visually pleasing and run at a great pace; I experienced little to no slowdown, even during multiplayer showdowns. The game is also a bit forgiving with timing discrepancies to make up for a lack of rhythm or television lag delays. I like the accessible approach to the title, even if some of the games can be a tad overwhelming for the casual rhythm game player. Player customization could use some more features, as you can only change skin color, basic outfit, and paddle/club/thing you hit balls with (though you will unlock more items as you play through the minigames). I would have appreciated different character models or individual accessories, but it does what it needs to.

Whacky Bat is probably the best of the bunch and features the best of single-player and co-op gameplay of Super Beat Sports. You control your character as you hit balls from three (or on an unlockable difficulty, five) lanes, which are littered with different monsters. You’ll need to time your rhythm with throws, as there will be a ton of different projectiles coming your way. At the end of each stage, a batting machine robot will appear and will turn the lanes into a batting diamond where you’ll have to deal with more unpredictable and faster throws, Luckily, these visual cues are more distinct, so it’s a little easier to handle. While straightforward and super easy in the beginning, later levels (especially the pro mode) can get tricky at times.

The reason Whacky Bat is a standout is because of how the game handles co-op: Both players need to make sure they’re not actively impeding each other, as you can stand on top of each other if you are both in the same lane. This of course is implemented in later levels, so coordination is key. It was fantastic trying to cooperate with my friend as we had to hit different colored balls all over the field, and even though he wasn’t as rhythmically inclined, the forgiving timing system made this accessible. Whacky Bat is a great starter game, and takes advantage of Super Beat Sports’ aesthetic and features very well.

Net Ball is also a pretty nice minigame, though it feels less involving compared to the last. One or two players will try to volley and spike a beachball as it passes around a futuristic volleyball net. Here, you’re pressing one button to hit the ball in time with cues. While theoretically simpler than Whacky Bat, this game still manages to be charming due to how the flow of cues work. While it feels a little unpredictable because you’re returning quick volleys rather than baseball throws, the simpler control scheme means you only have to focus on one button rather than an analog stick (and if playing in co-op, overlapping lanes). The co-op mode here is still fun, though you’ll have to prepare volleys pretty quickly.

Is this online? Because we’re SURFING THE NET HAHAHAHA

Out of the three cooperative minigames available, Gobble Golf seems to be the worst one of the bunch. You have to follow the rhythm of different aliens by driving golf balls to them to feed them (I guess alien digestion is different from other creatures). Normally this wouldn’t be too difficult, but you have an oddly strict timing period to time your swings, and because of how the game works, you can basically miss every ball due to one mistimed swing in a chain. The co-op equivalent is also a complicated mess, as you can only hit your own colored balls. In Whacky Bat, this isn’t an issue, but here, you will have to manage alternating swings and it just becomes a complex mess on later songs (never mind pro difficulty), This is one that felt a bit inconsistent and one that I would skip the co-op mode for.

As if you didn’t think golf could be cooperative.
…Some things are better off single-player.

The quality of Super Beat Sports picks up with Buddy Ball, which is reminiscent of Whacky Bat but supports four players competitively. Here, you have to continuously volley a slew of throws in a line, with different timings and powerups to confuse the competition. Each player has three lives, and once you run out of them, it’s curtains for you. You keep playing until the last person remains standing. I thought it would be a slightly tamer version of Whacky Bat, but when playing with friends, it became a frantic game which favored pressure and quick thinking, and it was an oddly fun time. There isn`t a lot of customization or songs here, but it’s still a wonderful little time killer if you have people over.

I already used my internet pun, and it was a cold reception, that.

The other four-player offering (as well as the Switch-exclusive game) is a little less than stellar. Rhythm Rally is a four-player free-for-all, as you have to defend your own net in a little game of rhythmic ice hockey. In your way are different colored blocks and aliens that can be controlled to hold and fire balls at will, which can be a blessing our curse to those who wield that power. However, unlike the other four games, this seems like it doesn’t utilize the rhythmic aspect of the game. The background music here doesn’t really stand out, which is an issue when you’re trying to lob or hit balls away from you. Due to the somewhat randomized nature of the game, it feels like you’re relying on visual cues rather than audible ones, and that feels out of place in a music game. I didn’t have much fun with this one.

While not offering too much from the Apple TV entry, Super Beat Sports is a serviceable rhythm party game. Its simple controls and infectious soundtrack will have you tapping your toes, but a couple of games in the collection might be a bit disappointing to play with friends.

Elisha Deogracias is an aspiring accountant by day, freelance writer by night. Before writing for Gaming Trend, he had a small gig on the now defunct Examiner. When not being a third wheel with his best friends on dates or yearning for some closure on Pushing Daisies, he's busy catching up on shonen manga and wacky rhythm games. Mains R.O.B. in Smash. Still doesn't know if he's a kid or a squid.
Related Articles: Indies, Super Beat Sports
Share
Tweet
Share
Submit