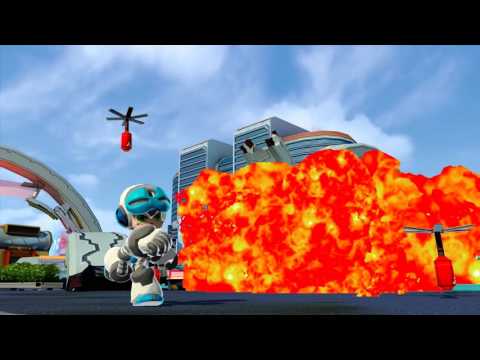 Shadowrun, Pillars of Eternity, Wasteland 2, Shovel Knight, Elite: Dangerous, The Banner Saga, Mighty No. 9 — all of these games have one thing in common: they were wildly successful on Kickstarter. Unlike everything else on that list, however, Mighty No. 9 may be the first Kickstarter-backed effort where I came away disappointed in the end result.

When Keiji Inafune announced that he had assembled a team of veterans from his Mega Man past to create a spiritual successor to everyone’s favorite blue bomber, I couldn’t be more excited. As $3.9 million of an original $900,000 ask was provided by tens of thousands of backers, it’s clear I wasn’t the only one. What came next was a sequence of delays, a rough post-collection Kickstarter campaign, and a lot of silence punctuated by a painfully predictable trailer just a week before launch. Regardless of all of that, the game has finally launched, so let’s see what nearly 4 million dollars has bought us.

Time to battle some bosses.

Just like a parody song, Inafune changed enough of his original Mega Man formula to not get sued. You’ll select a world in any order you’d like, squaring off against a boss and stealing their powers. All of that is familiar territory. To power your stolen skills you’ll need to absorb enemy “Xel” (pronounced like cell) through AcXellerate attacks. Said another way, you’ll shoot enemies until they flash purple, and then use a shoulder button to dash into it. Enemies will recover if you don’t take them out, and failure to follow this pattern gives bosses a period of invulnerability where it recovers energy up to their last ‘checkpoint’ in their health bar.

The storyline hooked to this new AcXellerate mechanic is that the Sanda Corporation’s robots have gone haywire, all except for you — Mighty No. 9. You’ll have to take down your eight brothers and sisters to help them ‘snap out of it’.

The art in the original pitch videos for Mighty No. 9 had a bit of a dark tone, showcasing a classic look that had fans excited. For whatever reason, the team decided to switch to a 3D engine and lightened the color pallet significantly. The end result is an overbright but still great Kaiba Madhouse mixed with Yotsuba anime style for the character designs, mixed with what can only be described as a dated and remedial implementation for the levels where those characters live. Fire and destruction effects are what you might find on the PlayStation 2 or Dreamcast. Ugly and blocky chunks of debris fall and then disappear unceremoniously, punctuated by fire that looks like I have a bad video driver loaded, or the graphic options are set to low.

In a bizarre twist, Mighty No 9 also suffers from some frequent and inexplicable framerate hitches. The game hums along at 60fps easily, until it doesn’t. Regardless of on-screen activity, the game will unceremoniously drop into the teens. Couple that with the fact that Beck will latch onto some surfaces without complaint, and others (and always over a pit, it seems) he’ll frustratingly choose death rather than a handhold, and it makes for a great deal of unnecessary frustration. This manifests itself nicely in a Battletoads-inspired freeway chase where you often only get one attempt at hitting your mark.

What is going on with the fire??

You’ll note that I’ve had very little to say about the powers you steal from your numbered brethren. There’s a reason for that — put simply, they don’t matter much. While I’m certain some fans will figure out the best weapon for the job for each foe, I found that I was able to usually chip away at my foes with the regular blaster and get the job done most of the time.

Don’t get the impression that the blaster isn’t a source of frustration, however. No 9 can only shoot horizontally, meaning foes or bosses will always be just out of reach for your jump, inches out of range for your weapon, fly above your head with impunity, and can regenerate health faster than you can escape whatever annoying gimmick they bring to the table.

Fighting the other unlockable character, Rey.

When I encountered her, I thought Cryo may just be the most annoyingly-voiced and repetitive character in history. I was wrong. Every boss in this entire game is annoying and repetitive. It’s just anime-bad, not quite Resident Evil bad, but phrases are on a near infinite loop. I counted one section that had Beck saying “Here we go” thirteen times in a row, followed up with half a dozen “alley oop!” and a handful of “That’s more like it”. The squeaky and annoying voice work is relentless, losing all of its charm almost instantly.

The one shining star here is that you can also unlock a second character named Rey. Rey is a Xel-hungry female robot that clearly has a bolt loose. Her mechanic is that she’s constantly losing health, but killing other robots and absorbing their Xel keeps her alive. It adds a twist to the formula, but not enough to salvage what’s here.

It isn’t often I feel this conflicted about a game review, but I suppose it’s apropos here. The game feels as conflicted as I do. Most levels look very rough, but a few really shine. Some platforming areas are fun and challenging, while others are cheap and serve only to frustrate. A few acquired powers are genuinely useful, while the rest border on entirely useless. In the end, Mighty No 9 didn’t end up nearly as mighty as we all would have hoped.

Uneven in tone and execution, Mighty No 9 is equal parts fun and frustration. Inafune won’t reignite the fire of his famed franchise with this initial effort. We can only hope that subsequent attempts to reboot the blue bomber turn out better.

Ron Burke is the Editor in Chief for Gaming Trend. Currently living in Fort Worth, Texas, Ron is an old-school gamer who enjoys CRPGs, action/adventure, platformers, music games, and has recently gotten into tabletop gaming. Ron is also a fourth degree black belt, with a Master's rank in Matsumura Seito Shōrin-ryū, Moo Duk Kwan Tang Soo Do, Universal Tang Soo Do Alliance, and International Tang Soo Do Federation. He also holds ranks in several other styles in his search to be a well-rounded fighter. Ron has been married to Gaming Trend Editor, Laura Burke, for 21 years. They have three dogs - Pazuzu (Irish Terrier), Atë, and Calliope (both Australian Kelpie/Pit Bull mixes).
Related Articles: mighty no. 9
Share
Tweet
Share
Submit